Wes Anderson doesn’t get enough credit for his imagination. Since 2001’s The Royal Tenenbaums, the director’s career has been defined by a steady evolution of ambition, first in 2004’s The Life Aquatic with Steve Zissou‘s subtle bent toward fantasy, then in 2009’s Fantastic Mr. Fox‘s sprawling stop-motion spectacle, and most recently in his most visionary exercise in world-building yet, 2014’s grandiose adventure The Grand Budapest Hotel. Despite that many critics remark on the static nature of Anderson’s style, each of these films illustrated a considerable expansion of Anderson’s sensibilities beyond the comfortable at the time of their release; his distinctive characters, family drama, and deadpan humor no longer seemed to operate in some version of the real world, but instead in a self-contained fantasia to which only he held the key. This was not some zero-sum game in which the development of the imaginative aspects of Anderson’s movies took away from the human stories at work in each of them, either; on the contrary, as Anderson has evolved, his character relationships and narrative infrastructure have remained just as strong, and in some cases, more affecting and immersive because of their existence in a more sculpted, detailed environment.

From a glance, Anderson’s latest adventure, Isle of Dogs (2018) appears once again to be another triumph of the director’s most underappreciated talent. The film revisits the impressive stop-motion stylization of Fantastic Mr. Fox with an entirely original script (in contrast to the origins of its predecessor as a beloved Roald Dahl novel) set in a storybook version of Japan about an array of idiosyncratic, uniquely troubled characters. In the movie’s introduction, we’re told of an insidious epidemic of “dog flu” sweeping through Japan and the subsequent measures taken by Megasaki City’s ruthless Mayor Kobayashi (voiced by Kunichi Nomura) to expel all dogs to the literally-named Trash Island. The story picks up when a band of exiled dogs led by Chief (Bryan Cranston) reluctantly join up with Atari (Koyu Rankin), the orphaned human ward of the mayor, who comes to Trash Island in search of his treasured pet Spots (Liev Schreiber). As usual, Anderson has plenty of space to excavate the neuroses and eccentricities buried in each of the characters through awkward and heartfelt exchanges, but the offbeat setting gives the director the chance to tell a familiar tale in a new context. 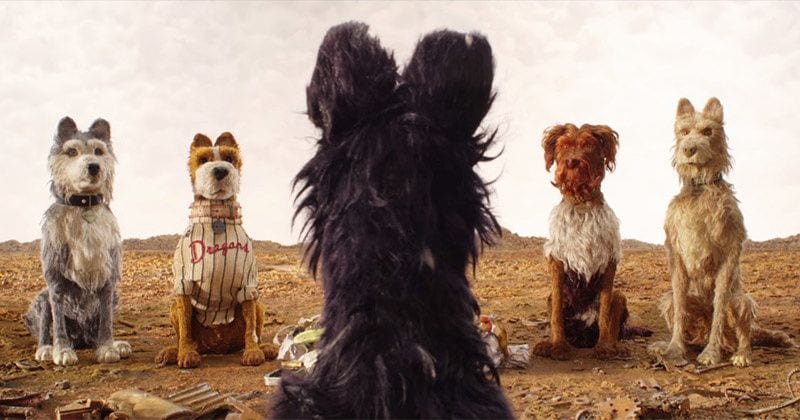 Isle of Dogs is at its best when we’re discovering the secrets of Trash Island, in the middle of sly banter between the characters, and enjoying the audio-visual feast on constant display (and beautifully rendered on the Blu-ray release). Anderson staples Bill Murray, Jeff Goldblum, Edward Norton, and Bob Balaban fill out the main voice cast, while stars like Scarlett Johansson, Ken Watanabe, Greta Gerwig, Frances McDormand, Yoko Ono, and Tilda Swinton bring life to minor roles. (A host of Japanese actors provide voices for Japanese-speaking characters whose dialogue is not subtitled and only occasionally translated by other characters, as well.) For some, the visual style of the film — its true star — may prove divisive due to its somewhat minimalist approach. With a few notable exceptions, each of the environments on Trash Island are monochromatic: mountains of orange-brown rust, faded white newspapers, dull grey plastics. Set against Anderson’s vibrant and colorful conception of mainland Japan, these images offer a splendid thematic juxtaposition illustrating the plight of the banished canines. Because of this, many are likely to find it one of the most visually attractive films of the year, but it’s certainly not everyone’s idea of beauty. (In either case, it’s indisputably distinctive.) Wielding these few elements, Isle of Dogs immediately works its intoxicating power on its audience. 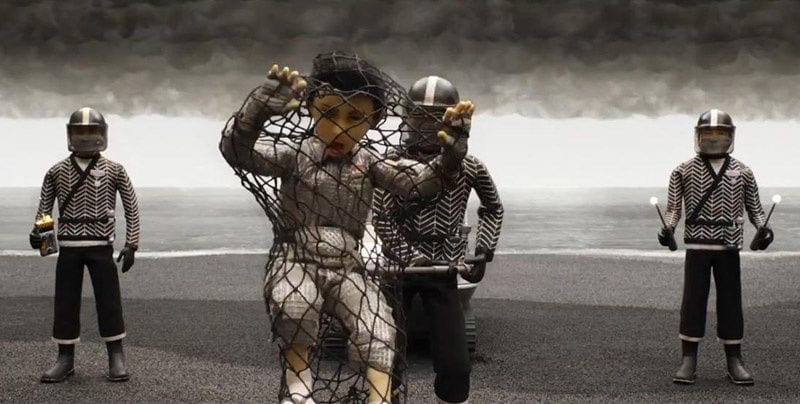 But through that sheen of enormous production value, light wit, and undeniable charm, some cracks start to show. Many of the film’s characters are wildly underutilized or pitifully thin, from secondary characters like Chief’s chic, smooth-talking love interest Nutmeg (Scarlett Johansson), who appears quite briefly in just two or three scenes, to the film’s central roles like Atari, who is given precious little characterization outside of a flashback explaining his love for Spots. Even the main group of dogs are indistinguishable from one another outside of Chief; it’s part of the joke that they behave as a unit, but the result is that Murray, Goldblum, Norton, and Balaban are unable to establish any real personality.

Worse are the tedious, momentum-killing plotlines that take place in Megasaki City running parallel to Atari and the dog pack’s search for Spots on Trash Island. Anderson frequently pulls us away from the movie’s lively antics to bland expositional scenes in which scientists discover a cure for the dog flu and struggle against Mayor Kobayashi, who secretly commits himself to exterminating the dog population on the island. In this storyline, the viewer’s sympathies are forced onto a young, white American exchange student named Tracy (Greta Gerwig), who spends her half of the film figuring out a way to expose Kobayashi’s conspiracies. Besides slipping into generic plot filler and offering little else than a laborious diversion away from the movie’s great strengths, the whole section is a tone-deaf and remarkably shameless example of the white savior trope from a director who has seen more than his share of similar criticisms.

It’s here that the controversy surrounding Isle of Dogs becomes unavoidable. Already so much has been said about Isle of Dogs and cultural appropriation: about the value of a dystopian depiction of Japan from a Western perspective, about harmful and lazy stereotypes in both character behaviors (meek, subservient women and domineering, authoritarian men) and cultural signifiers (sumo wrestling, taiko drums), about using a fragmentary romanticization of Japanese culture and language as a visual/auditory aesthetic. While a majority of the audience may go unbothered by these undertones, they may be hard to square for some viewers with the themes the movie ostensibly presents. Think of it this way: Anderson has crafted an allegorical fantasy in which victims of oppression and otherization (Japan’s dog population) are given a voice, while their oppressors (the Japanese people) are almost literally denied their voice (through their lack of subtitles and translation). As symbolically powerful as this may seem in a vacuum, it brazenly ignores the opposite dynamic at work in the real world with respect to white Western traditions of otherizing Asian cultures, and thereby engages in the practice itself. At the very least, it’s thematically inconsistent, but it also risks dropping the ball on a globally-significant conversation that grows only more important by the day. It’s not just sloppy storytelling; it’s sloppy politics.T

o Anderson’s credit, he makes some efforts to include Japanese perspectives — namely in the film’s large Japanese voice cast and Kunichi Nomura’s co-writing duty alongside perennial Anderson collaborators Roman Coppola and Jason Schwartzman. He even claims Japanese master Akira Kurosawa was a major influence on the film, alongside animation legend Hayao Miyazaki, who tells relationship-focused stories by manifesting human struggles in bold and vivid fantasy landscapes, and Yasujiro Ozu, who explored a range of generational dynamics in dozens of delicate domestic dramas and comedies. It’s the former whose DNA seems most pronounced in Isle of Dogs; visually, Ozu has always been there in Anderson’s symmetrical, angular compositions and head-on framing in dialogue scenes, and Anderson’s thematic affinity for dysfunctional families and family-like structures certainly finds its origins in the director’s great oeuvre. The Kurosawa comparison seems less apt, except perhaps in the lighter antics of adventure-style films like The Hidden Fortress (1958), as well as the band-of-outsiders interactions in Seven Samurai (1954). At any rate, there is indeed some level of authentic Japanese influence on Isle of Dogs, although the degree to which that makes up for the more insidious representation is questionable.

Of course, many of the director’s fans no doubt take umbrage with critics who focus on the appropriation conversation (and certainly, months into this particular controversy, this discussion is no doubt getting exhausting for everyone: defenders, onlookers, and critics), but the sad truth is, absent the movie’s place in that dialogue, it doesn’t really amount to much. Isle of Dogs is itself a film about otherism, and it does itself a massive disservice to engage so recklessly in politics that undermine that message. One wonders about these contradictions, whether the stereotypes might be self-aware, or at least self-conscious. Intended or not, this is a film that skirts alongside the politics of contemporary refugee crises, immigration crackdowns, genocide, nationalism, racism — even global warming. Despite what should be read as broad thematic gestures toward cultural sensitivity, the film itself is undoubtedly insensitive. Anderson’s imagination has flourished this decade, but in Isle of Dogs, his fantasies at least partially serve hegemonic ideologies and privilege — essentially, a maintenance of the status quo. Outside of its distinctive images, Anderson’s imagination fails the movie. 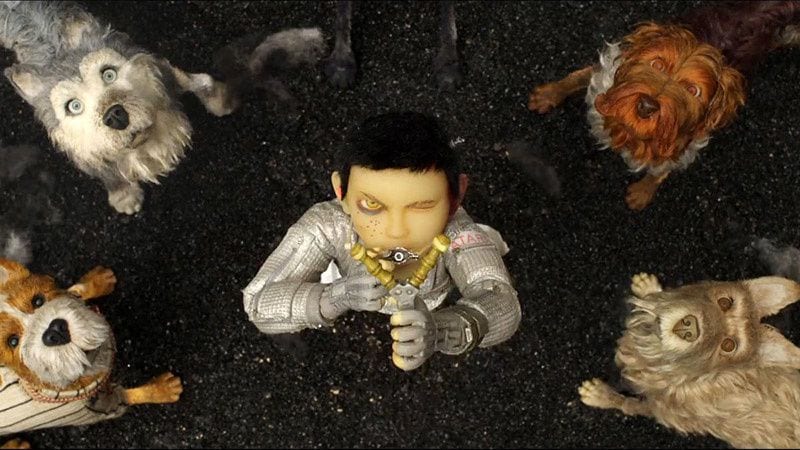 This is what some people mean when they say a movie values “style over substance”, but like most films, Isle of Dogs can’t be characterized by such strict hierarchies. The issue, instead, is that the film’s style — its visual flair, its snarky and ironic humor — is self-evident, whereas its substance is vague, conditional, and at times, hard to digest. Isle of Dogs is the kind of movie that’s productive to discuss within the context of the cultural conversations happening around it, and thanks to a deep cast and a supreme level of craftsmanship, it’s even fun to watch. But looking back on my time with the film, I’ve only grown cooler to the experience. It sabotages its own message. What do we do with a movie that’s stylistically sharp and polished, but so substantively confused?

Truthfully, Isle of Dogs is at its best when Anderson and his co-writers, the animators and designers, and the actors, cinematographer, and editors employ their collective imagination. When they instead insist on cobbling together an aesthetic from superficial elements of Japanese culture, plucking narrative strands from Anderson’s superior work, or distracting with generic plot points and empty secondary characters, it draws attention away from the movie’s beautiful core: a story of companionship and bonding, of the importance of a connected and affectionate society, and of a world that recognizes the value of diversity. Anderson’s imagination is put to good use in the movie’s singular imagery, its ironic comedy, and a handful of charming characters, but his lack of imagination in the story and the world itself define the film, as well. Isle of Dogs is a movie that is intensely enchanting, and easily one of the best-looking films of the year, but it doesn’t fulfill its own purpose. Anderson can dream up better.

The Isle of Dogs Blu-ray is paired with a handful of short promotional featurettes which grant an awe-inspiring look behind the scenes at the animation process, the creation of the puppets, the implementation of practical special effects, and the conception of the unique and detailed environments of Trash Island and Megasaki City. These supplements are uniformly fascinating, but with a length of two-to-four minutes each, they’re also far too brief (and already freely available to watch on the usual promotional channels). Also included are cast interviews, a gallery of promotional images, and a theatrical trailer. The cast interviews are slight, typical promo material condensed into one five-minute featurette, but they’re adorably animated with the same stunning quality (and comedic timing) of the film itself. These special features are well worth a perusal, but don’t add much substance to the package as a whole.