There wasn’t much about Robert Stevenson’s 1964 musical, Mary Poppins, that should have worked. The story made a hash of P.L. Travers’ original stories about the stern nanny with a knack for magic. It jammed in a suffragette subplot that was so mistreated it almost seemed to mock the entire cause. One song led to the next without much of a plot. Yet, like so many other cultural properties that Walt Disney cut and warped into a wholly unrecognizable shape, it all came together in a densely saccharine yet somehow authentically sunshiney way. Just reading about it now has likely put a few of the song choruses in your head for the rest of the day. You’re welcome.

As the law of diminishing returns for any sequel is one of the immutable laws of the cinematic universe—and all the more so for movie musicals (no matter what those fiendishly wrong fans of Grease 2 might claim)—there was even less chance that Mary Poppins Returns (2018) could pull the same rabbit out of one of Poppins’ very fetching hats. Nevertheless, this sequel manages a somewhat impressive feat for the often groan-inducing Disney remake factory: it captures the essence of the original while adding just enough spark to set it apart.

The story—by David Magee, John DeLuca, and director Rob Marshall—brings us right back to London’s 17 Cherry Tree house, where another family is in disarray. The Banks children are grown up now. It’s the Great Depression and fortunes have soured. Jane (Emily Mortimer) carries on her mother’s ideals as a labor activist. Michael (Ben Whishaw) is a widow and onetime artist now working at his father’s old bank to raise his three button-cute children Anabel (Pixie Davies), John (Nathanael Saleh), and Georgie (Joel Dawson). To say that the Banks’ have forgotten the lessons imparted by their magical nanny is putting it mildly. By the time Mary Poppins (Emily Blunt) comes floating down from a cloudy grey London sky after snagging Georgie’s kite, 17 Cherry Tree Lane is just about drowning in adult reality.

One’s first question is likely to be: Can Blunt capture Poppins’ flinty self-regard and Pied Piper confidence? Of course she can. A director has yet to hurl a curve ball at Blunt that she can’t knock out of the park. She deftly manages that firefly trick that Julie Andrews did, of making Poppins a figure of both stern discipline and fantastical fun. First she’s telling the kids to clean themselves up and next she’s dropping them through a magical bathtub into an underwater Busby Berkeley routine or taking them on a highly risky nighttime escapade with a crew of lamplighters. Like Andrews, Blunt flits between the two states seamlessly, with no more than a raised eyebrow or shushing finger to the lips to betray that something magical just happened.

The closest thing Mary Poppins Returns has to Bert (Dick Van Dyke’s chimney sweep in the original) is Jack (Lin-Manuel Miranda, tickled to be here and showing it), a lamplighter with no real reason to be hanging around other than a slight infatuation with Jane. (Bert always seemed to have a thing for Poppins, but he knew that nothing could ever happen between them, as she was not of this Earth, and the classes just didn’t mix like that in Edwardian England.) Miranda opens the movie with a sweetly ironic ditty “(Underneath the) Lovely London Sky” and serves as Poppins’ happy-to-help partner through many of the magical escapades that follow.

Travers’ books tend to just go from one adventure to the next, and this movie is no different. In fact, the more the screenplay returns to the ostensible storyline—Michael has five days to find some valuable stock certificates or the bank will repossess 17 Cherry Tree Lane—the more things drag. The more that Marc Shaiman and Scott Wittman’s songs are allowed to unfurl with little regard to story, the more they come alive. It’s only when we see Michael mourning his wife and nearing collapse that the plot carries any weight. Otherwise, the race against time to save the house is both too thin and too time-consuming to bother keeping viewers from the next song.

The numbers themselves are a mixed bag, even when featuring cameos by the likes of Angela Lansbury and Van Dyke. It won’t be a shock to say that nothing much here carries a fraction of the catchy bounce embodied by Sherman Brothers numbers like “Let’s Go Fly a Kite” or “A Spoonful of Sugar”. Even the Sherman Brothers themselves couldn’t top that selection of songs later in their long career. But a few of Shaiman and Wittman’s compositions are memorable, from the animated kickline extravaganza “A Cover Is Not a Book” to the fantastical “Turning Turtle”, even if the latter is just an excuse to give Meryl Streep a Tang-colored wig and eccentric frock (the movie’s Sandy Powell costumes could inspire their own show at the Met) and make a joke about her untraceable Eastern European accent.

In the past, Marshall has been stronger when directing adaptations of musicals that had already worked out all the kinks in live productions, from his high-octane take on Chicago to the lavish and highly underappreciated Into the Woods. Mary Poppins Returns doesn’t have either of those movies’ polished razzle-dazzle, despite Blunt’s “pish-posh” efficiency and Miranda’s sunny optimism. It does a good enough job, however, of embodying the original’s bright and sunny spirit, which might send at least part of the audience out looking for their own kite to fly and problems to escape. 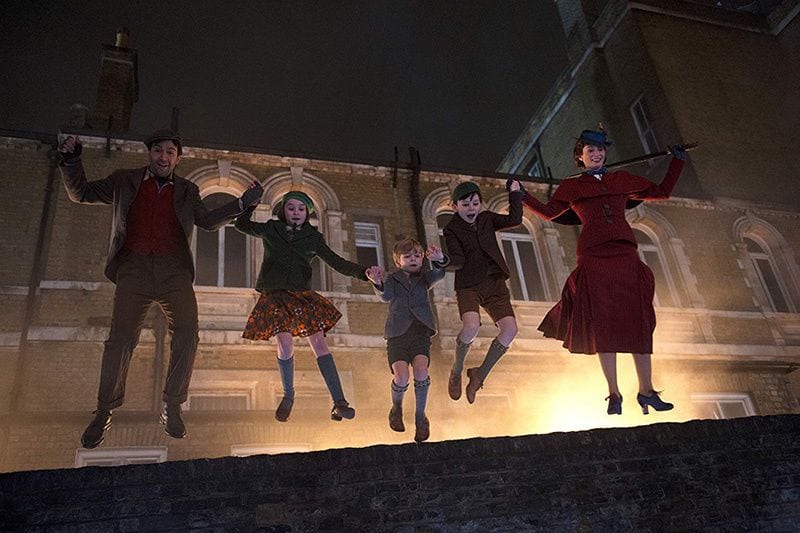