It’s a delight to plunge into the depths of a graphic novel that so thoroughly delights in its own comics-ness. Tumult by collaborators John Harris Dunning and Michael Kennedy is on its surface a noir romp of a story with guns and killers and a leading lady who is several leading ladies—a victim of multiple personality disorder and government experiments who is both antagonist and heroine. But that surface also pulls us down into the deep end of visual surprises infused with a surreal energy unseen except in some of the most obscure corners of Golden Age comics.

Artist Michael Kenney’s style is hard to pin. The gritty noir context emphasizes the starkness of his lines and shapes in a way that evokes Michael Gaydos’s Jessica Jones or David Mazzucchelli’s Batman: Year One. And though his edges are sharp, there’s an internal inexactness to the oversized images that produces the tension of a camera set a degree out of focus.

Kennedy also likes to center and isolate his subjects with deliberately anti-climatic framing—only to then zoom-in for abrupt and too-close close-ups of a mouth or an eye. Key moments sometimes go undrawn, throwing what should be a central event into unexpected ambiguity. Other times his frames inappropriately crop out heads, or he angles a sequence of panels from behind a speaking character, offering repeating images of black hair instead of shifting facial expressions. Except his faces often don’t shift but reproduce identical renderings with evolving backgrounds, emphasizing the drawn artifice of the page and its blocky layouts. 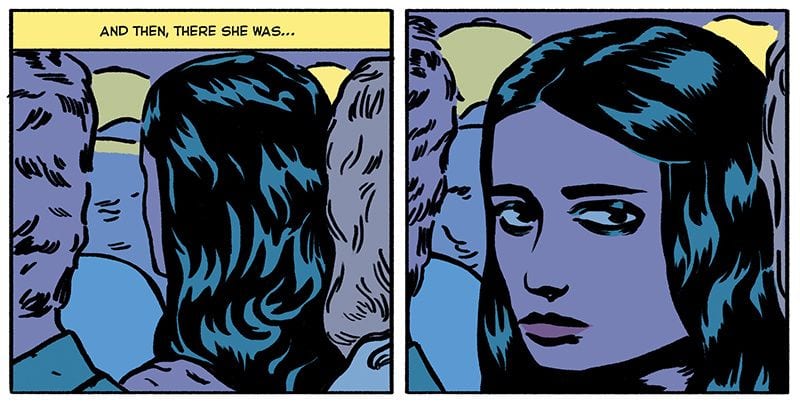 Each stylistic detail is fascinating, but the accumulative weirdness goes much deeper. The world of Tumult seems to be filtered through some obscure and obscuring process that throws its reality into uncertainty. As a viewer, you’re never quite sure where you’re standing—let alone whether its solid ground. The effect is ideal for the subject matter: a character whose identity changes page to page with no clear, controlling center. Though the narrator is her observer, the fabric of the drawn world reflects her internal tumult. She is an incomplete weave of contradictory memories and blackouts—captured in Kennedy’s off-angles and odd cuts and other roaming peculiarities.

But the weirdness of the story goes even deeper still. Yes, there’s a conspiracy plot and government scientists and even a transcendent spiritual hallucination, but those multiple personalities are also meta-types from early 20th century comics. When they chat with each other, we’re dropped into a literally tarnished, Ben-day-like dot-colored world of newspaper comic strips. Even the narrator’s world, the baseline reality of the novel, has more to do with the ’30s than even the ’90s action film references that litter the dialogue.

Kenndy’s biggest and most unexpected influence seems to be Fletcher Hanks, AKA Barclay Flagg, a profoundly obscure comics creator who, for his less-than-two-year Golden Age career, produced the unlikely likes of Stardust the Super Wizard and Fantomah, Mystery Woman of the Jungle. Rightly forgotten for decades, Hanks re-premiered in the ground-breaking anthology Raw in the ’80s, where his incomprehensible incompetence was reinterpreted and embraced for its accidental surrealist effects. Editor Greg Sadowski writes in his Supermen! The First Wave of Comic Book Superheroes 1936-1941: “Hanks’ singular, obsessive—and at times unintentionally hilarious—approach found a fortuitous opening in comics’ formative period; his work would have been unthinkable only a year or two later.” 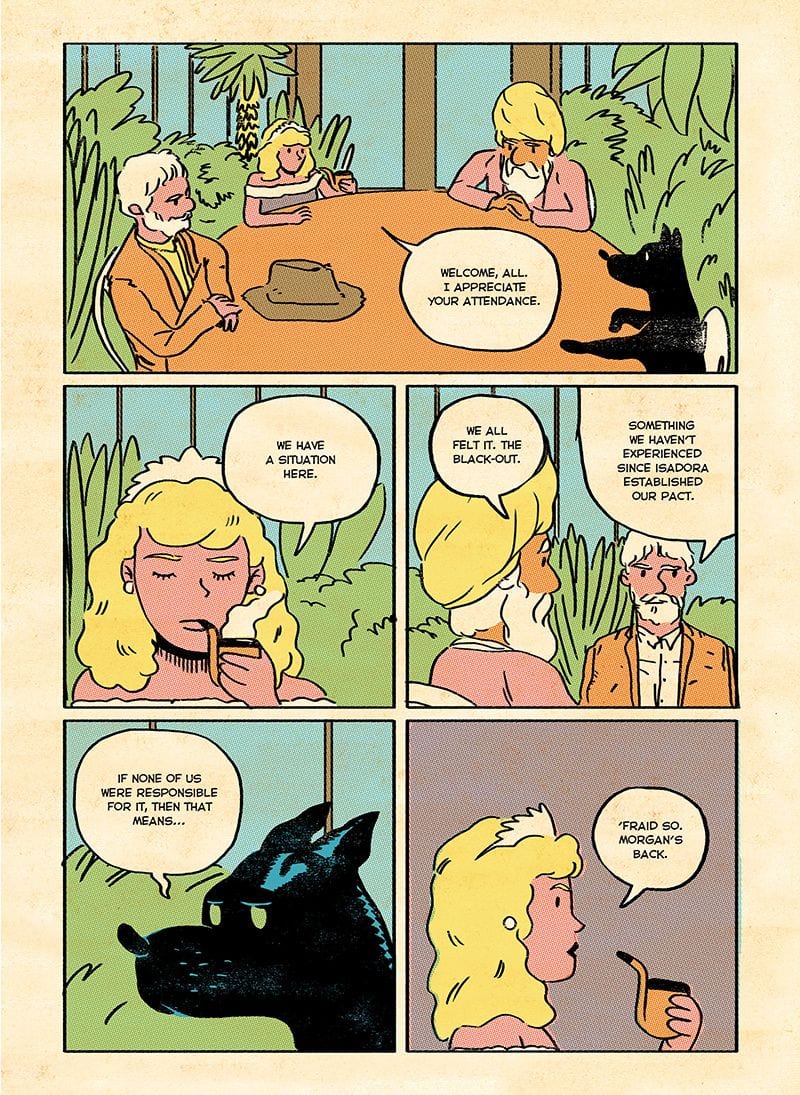 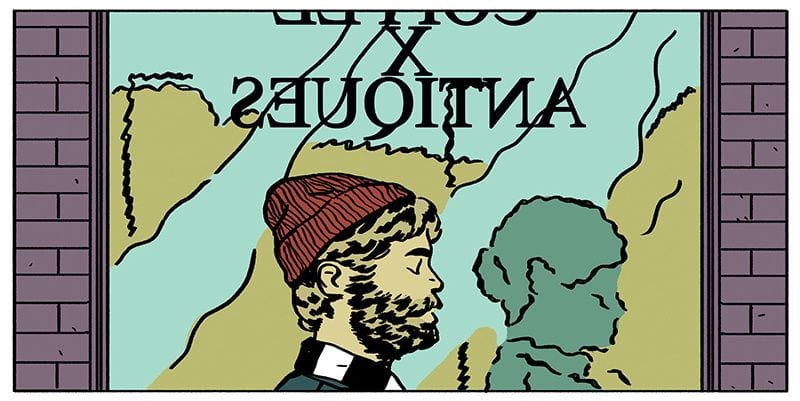 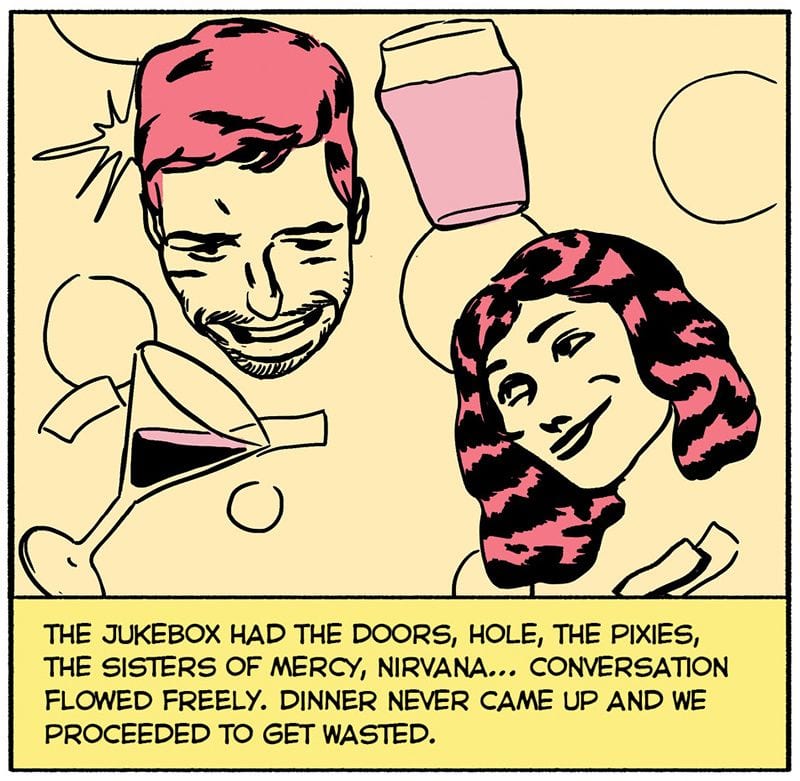 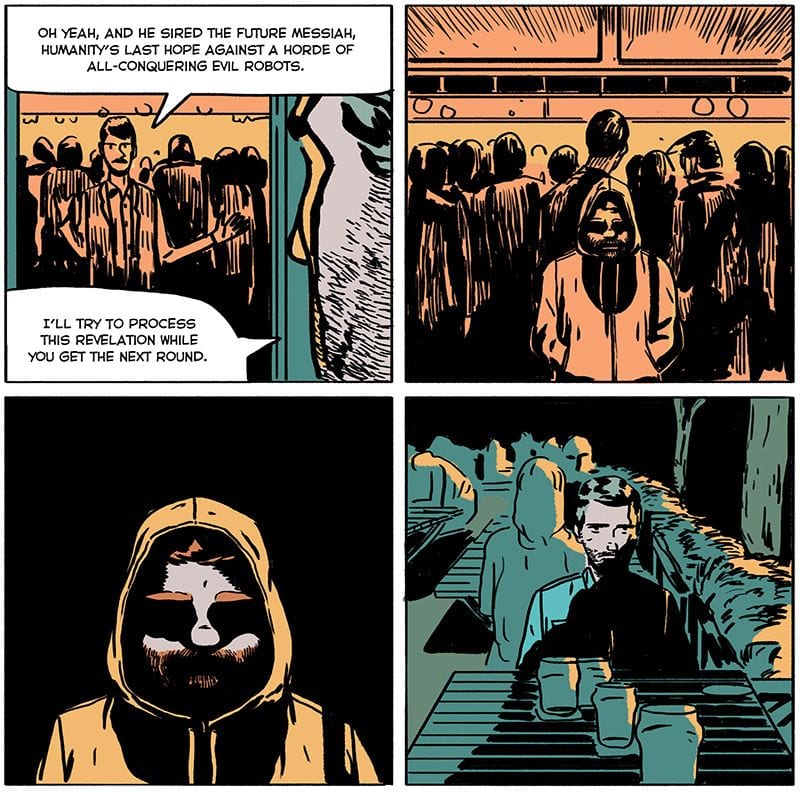 To be clear, in terms of skill and intent Kennedy’s artwork is the opposite of Hanks’. Kennedy is making carefully crafted choices for dizzying effects. He’s just selecting those effects from the idiosyncratic chaos of Hanks’ naïvely drawn pages. There’s also the possibility—since Tumult‘s PR and surrounding matter never mention Hanks—that I’ve projected influence where there’s only coincidental (albeit unnerving) resemblance. Regardless, Tumult is artistically ingenious.

Instead of Hanks, the back-cover blurb evokes Alfred Hitchcock and Patricia Highsmith—a legendary film director and a noir novelist best known for her Ripley series about a psychopathic anti-hero. While both references are apt, they point away from the novel’s most interesting qualities because they point away from the comics form. Tumult is not simply a narrative that happens to have been developed graphically and so might still translate into film or prose. It’s so fundamentally a comic that talking about its plot and characters without their visual grounding literally and metaphorically misses the picture.

This isn’t the case with many graphic novels. Some comics stories work the comics form like storyboards of documentary-like events set in a fictional world. The artist gives a certain stylistic spin to the content, but if the comic were to change artists mid-story—a norm of so many mainstream series—the story isn’t fundamentally affected. But Tumult without Kennedy’s defining style would not be Tumult.

Taken as just a narrative—presumably the narrative that Dunning wrote in script form and handed to Kennedy to illustrate—Tumult is a perfectly good retro-thriller. While unsympathetically dickish, its primary narrator, Adam, is no talented Mr. Ripley or hard-boiled avenger policing a moral wasteland. He’s just a second-rate film director sabotaging his life because he doesn’t have what it takes to be a main character. So when the femme fatale finally enters on page 46, she’s not only his life line but the story’s, too.

Though Adam longs to be her heroic savior, he languishes in the plot’s margins as Morgan and her multiples rightfully claim center stage and the dramatic action. It turns out Adam literally is just a supporting character. That’s an intriguing meta-fact, but neither the character nor the story seems aware of it, dropping the elaborate first act into retroactive limbo. If Adam’s actions, including his motivated point-of-view on Morgan, don’t unlock some key plot or personality element, then what’s the pay-off for our having watched him cheat with a teenager to dump his girlfriend of ten years and then squander his single shot at a major movie deal because he’s too busy binge drinking? Not only he but his entire character arc recedes, and so then Morgan’s story might have been observed from just about anyone’s perspective, not just this particular nobody’s.

But the artfulness of Tumult isn’t Kennedy’s alone. Dunning’s Adam offers more than one killer description (“Like a spaghetti western set, I looked okay from a distance”), and I presume it’s Dunning’s script that mapped any of a range of visual motifs that Kennedy executed. I especially admire the fantasized close-ups of the teenager’s foot stepping on Adam’s fingers as he grips a cliff edge. The initiating sequence runs parallel to but is unexplained by Adam’s panic-driven narration, leaving the viewer to decode the visual metaphor and how, even though the event never actually happened, it kinda did.

I could go on, but these visual pleasures are best experienced first-hand. Tumult is also this dynamic duo’s first adventure together. I hope it’s not their last.