Few filmmakers had as fascinating and befuddling a career as Luis Buñuel. He burst on the scene as the Surrealist cinematic collaborator to Salvador Dalí with the notorious silent short Un Chien Andalou (1929)—featuring the disturbing but unforgettable scene with the razor blade cutting an eyeball, forcing the vitreous fluid to flow out of it—and the controversial but compelling satire, L’Age d’Or (1930).

Buñuel worked behind the scenes on commercial films in Spain for several years before going into self-imposed exile in 1938 to escape the fascist regime of Francisco Franco. For the next seven years, Buñuel scraped together a living on the scraps thrown him in the United States but he never gained a foothold. He unsuccessfully attempted to sell ideas for two documentaries; got a temporary position at the Museum of Modern Art in New York City editing films as anti-fascist propaganda, and then lost it owing to some bitter machinations on the part of Dalí; did some dubbing work in Hollywood; and then quit it all in 1945 to “realize [his] life’s ambition for a year; to do nothing” [Quoted in André Bazin, The Cinema of Cruelty: From Buñuel to Hitchcock (NYC: Seaver Books, 1982), 89].

In the late ’40s, Buñuel was in Mexico during the peak of the “Golden Age of Mexican Cinema”, when film was the third largest industry in the country. Buñuel’s first attempt to break into the scene, Gran Casino (1947) starring the celebrated singer and leading man Jorge Negrete, was an unexpected flop. Nevertheless, Buñuel worked his way toward commercial success with the comedy El Gran Calavera (1949) in collaboration with Fernando Sol and then a critical succès de scandale with his unflinching portrayal of poverty in Los olvidados (1950)—which led both to calls for the renunciation of Buñuel’s newly acquired Mexican citizenship on the one hand and the Best Director prize at the Cannes Film Festival of 1951 on the other.

Buñuel was based in Mexico for the remainder of his life and directed over 20 films there (or split his filming between Mexico and other countries). In the latter part of his career, he returned to Surrealism and the puncturing of middle-class norms, produced his many familiar masterpieces: Viridiana (1961), The Exterminating Angel (1962), Belle de Jour (1967), The Discreet Charm of the Bourgeoisie (1972), The Phantom of Liberty (1972), and his last work That Obscure Object of Desire (1977). Buñuel also directed many films that are largely forgotten today that were geared more specifically to the popular taste in Mexican film. These works ranged from comedy to musicals to melodramas. Some of these films are impressive works in their own right: most prominently Él (1953). One film, however, stands out for the distance it maintains from Buñuel’s best work. Indeed, Buñuel himself declared it to be “quite simply the worst film [he] ever made” [My Last Sigh: The Autobiography of Luis Buñuel, trans. by Abigail Israel (NYC: Vintage Books, 2013), 202]. That film is A Woman without Love (Una mujer sin amor) (1952).

Based on the Guy de Maupassant short story “Pierre et Jean“, A Woman without Love concerns the consequences of an adulterous affair Rosario (Rosario Granados) has with the idealistic engineer Julio Mistral (Tito Junco). Although she plans to run away with Julio and take her child Carlitos (played as a boy by Jaime Calpe) with them, she abandons Julio, whom she declares to be her one true love, when her husband Don Carlos Montero (Julio Villareal) suffers a severe heart attack. Julio goes to Brazil alone. Many years later, the son, Carlos (played as an adult by Joaquín Cordero) is a doctor and his younger brother Miguel (Xavier Loyá) is just graduating medical school. The brothers hope to open a clinic together but lack the funds. Suddenly, the family is notified that Julio Mistral has died and left his fortune to Miguel—whom he has, of course, never met.

Carlos becomes convinced that his brother is the illegitimate son of Julio, thus explaining his inheritance. He asks another young doctor, Luisa (Elda Peralta) to marry him but she prefers and marries Miguel. Carlos assuages his disappointment by assuming she loves his brother for his new-found wealth. Indeed, Carlos explains all of his misfortunes through the unexpected boon Miguel experiences. His ire, however, is not directed toward his brother nor toward Miguel’s illegitimate father, but rather toward his mother, who comes to represent for him the impossibility of ascertaining the fidelity of women. He places the burden of what he perceives as the family shame, his own failures in establishing a practice, and the loss of the woman he feels he deserves at his mother’s feet. The film clearly sides with Rosario, who insists that Julio was her one great love, a love that she sacrificed on behalf on her family, including the son that now repudiates her. In this sense, the title speaks against itself insofar as Rosario most certainly has love: love for her sons and a love for Julio that is not dissipated through distance or passing time.

Those looking to justify A Woman without Love as something other than a pure failure often point to the notion that Rosario represents a disavowal of the normative bourgeois codes of fidelity and honor. She is a woman who retains both precisely by defying the surface meaning of those terms. That is to say, by cheating on her husband yet standing by him (while he remains in the dark about her affair for the remainder of his life), she is faithful both to the yearnings of her heart and to the strictures of her marriage. She continues to support a husband she doesn’t love, and the film makes it clear (overly clear, perhaps) that she never brings him any unhappiness. Her devotion to Julio honors her inherent desire while her steadfastness toward Don Carlos honors her social obligations.

All the same, this is a pretty tepid justification for a fairly lousy film. This is the very stuff of mediocre melodrama and while it may be superficially resonant with Buñuel’s other meditations on bourgeois social mores, it lacks everything that makes most of the director’s work so entrancing. Nowhere do we find the Surrealist reversals that suffuse so many of his other films, nowhere do we find the strangely alluring characters that seem both recognizable and completely unreal, nowhere do we find the absurdity that in Buñuel can inhabit the most mundane of social spaces. Perhaps the only real justification for seeing A Woman without Love is to note, through its very absence, the imagination, wit, and brilliance one expects of Buñuel. 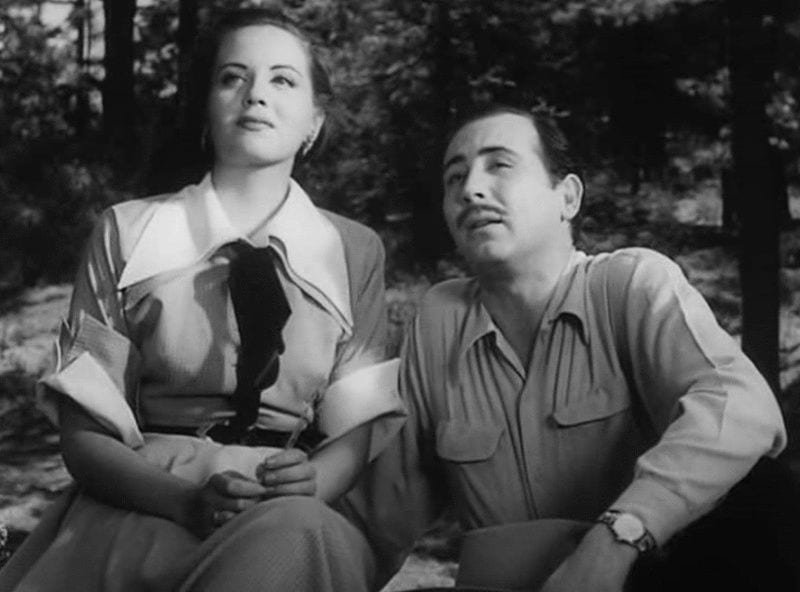 Facets Video has released a DVD of A Woman without Love. It’s a pretty poor transfer with warped and garbled sound, glitches in the print, and bargain-basement packaging. This is a video only recommended for Buñuel completists and even then I might suggest you wait insofar as the price is rather exorbitant considering the product.