Diamantino, now screening at the New York Film Festival, begins with a magnificent wide lens shot of galactic landscape, accompanied by a poetic voiceover on churches and soccer from its titular narrator. As the camera slowly descends from a fiery navy blue sky to another awesome spectacle — the final minute of a 2018 World Cup match— Diamantino (Carloto Cotta) is revealed. Diamantino is yet another strikingly beautiful figure, a Portuguese soccer superstar. Soon pink smoke and enormous puppies fill the stadium, signaling that this film is going to be one playful ride.

Diamantino‘s astounding surrealistic introduction soon unfolds into an ethereal genre-mashup, which includes a satire on the political and commercial exploitation of an apparently heteronormative icon after his fall from public grace.

Impossibly ignorant, charmingly naïve, and stunningly beautiful, Diamantino is initially capable of giving Portugal’s institutional brass what it wants — football, corporate commercialism, and glossy visual fuel for nationalistic ardor. So long as he kicks goals, and pumps out underwear ads and home products (satirized as orbiting planets-to maximum comedic affect), Diamantino can remain in his happy place, aloof to the ugly effects of the capitalism and propagandism he inadvertently perpetuates.

Diamantino’s rarefied air allows him to remain out of harms way from 21st Century sharks circling the waters. There are his venal twin sisters— demonic fem bots concocted as a blend of Cinderella’s evil siblings and MTV reality soap stars — who will stop at literally nothing for another financial score. Then, spying over Diamantino via drone (of course) are two secret service agents, Lucia and Aishia, a hipsterish same-sex female couple already judgmental of the celebrity “hunk” for off-shore fraud, seemingly without material evidence. 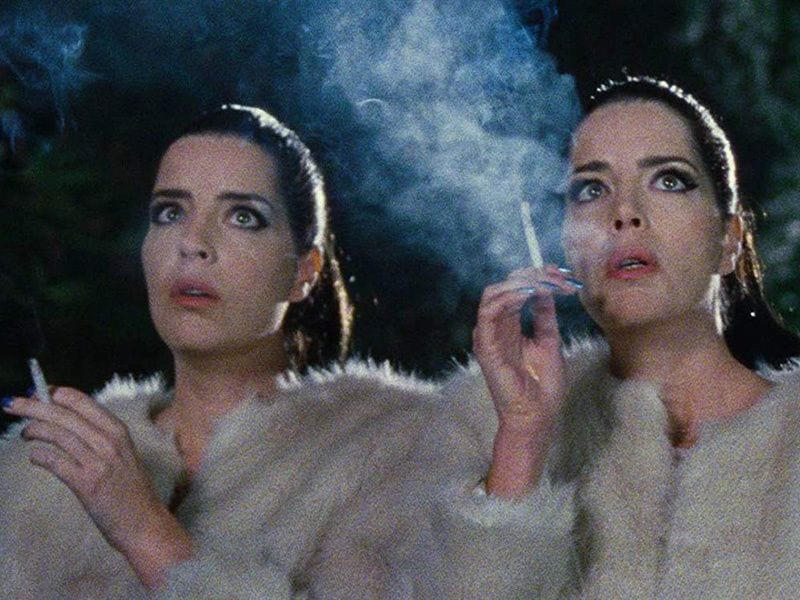 Predictably, Diamantino is brought down to earth to get a taste of his guileless capitalization of his brand. A chance yacht encounter with stranded refugees contorts Diamantino’s surrealistic happy place, thus ruining his quest for a World Cup in what is another stunning visual sequence. Crestfallen, Diamantino quits the sport and announces his desire to adopt a “fugee” (one of his many hilariously dimwitted malapropisms and naïve statements).

The response from the exploitative world which surrounds him is, as expected, viciously opportunistic. His sisters, having no use for him as a soccer star, instead coax him into enrolling as a guinea pig at the Lamborghini Corp, a genetic cloning lab with sci-fi horror flick flourishes galore. Meanwhile, the secret service — seeing an opening ironically based on Diamantino’s newfound largess — hatches an espionage infiltration where Aishia poses as “Rahim”, a refugee boy for Diamantino to adopt as his son. 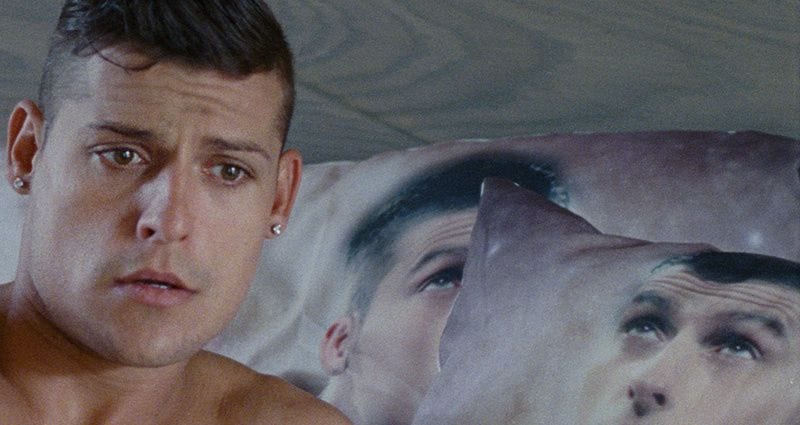 Directors Gabriel Abrantes and Daniel Schmidt clearly had a fun time with such a rum collection of satirical devices and genre twists. The musical montages, for one, are a real hoot. Donna Lewis’s “I Love You Always Forever” blasts to an obnoxious Lamborghini ride with Diamantino and his new “son”. It’s a clever bit of satire on capitalistic excess blended with foreshadowing a comedic exploration into a zany romance to follow. Likewise, the barrage of pokes at the film’s virginal naif–from his exclusive diet of Nutella waffles to his collection of puppy photos –all makes of endearing cinematic fare.

Still, once the film breaks down from its glorious surrealistic roots to a genre-mashup, there’s a feeling of missed opportunities. The multitude of genre shifts — from abstractionism to juvenile satire to political espionage to sci-fi camp — may prove to be frustratingly reductive to the film’s character arcs and thematic bases. For while there’s a continual waft of political dissent in Diamantino, the film never really goes all-in on any one point, instead engaging in a rapid fire array of pokes at commercialism, propagandist filmmaking, and gender stereotyping, among other usually heavy political topics.

There is a moment, later in the film, when Aisha reveals to the secret service that her fraud corruption findings mushroomed out to a massive nationalist propaganda scheme. The secret service’s response — predictably the standard procedural run-around — initially hits like a thud. Another highly intelligent woman of color unveils a gross injustice and is told to take it somewhere else, like maybe the grave.

But Diamantino is so light afoot and giddy about its ethereal twists and comedic pokes that it almost immediately lifts itself out of a mucky hard truth, and back to rarefied camp. With so many beautiful people and lush landscapes begging for indulgence, Diamantino cannot be bogged down for too long with bummers like genetic cloning and crypto-totalitarianism.

Nonetheless, these imperfections do not dilute Diamantino’s raison d’étre: this is a robust, vividly entertaining cinematic experience with a number of intellectually satisfying moments worthy of contemplation well after the film is over. The cinematography is shot with a beautiful 16mm lens, with grand scales and pleasingly vivid color compositions throughout the film. All the performances are boldly stated, the most notable being Cotta’s relentlessly energetic physical comedy and sincere obliviousness, good for several belly laughs.

After all, this world could use a little more silly irreverence, lest we forget that much of structured society is an absurd folly, and not to be taken too seriously all of the time.