Ridiculed and panned upon release, Edward Bianchi’s The Fan entered the ’80s with a slew of slashers that broke in the decade. Originally planned as psychological thriller and based on a 1977 epistolary novel of the same name by Bob Randall, this Lauren Bacall-driven vehicle was laughed right out of theatres upon its release. The Fan (1981) is essentially a suspense-drama peppered with the kind of shocks that come straight out of a giallo-horror. In truth, hindsight has been kind to the film. Though it’s easy to see how it could have earned such contempt during its initial run.

Without question a bona fide legend by the time she signed on, Bacall’s turn as an actress menaced by a young, mentally disturbed man set her up unceremoniously as an involuntary scream-queen. That she was a dignified 56 years of age at the time made the premise seem, perhaps, all the more distasteful. Critical and public ire probably had something to do with watching one of cinema’s most revered actresses being beaten with a riding crop, something no one, least of all Bacall, could have envisioned as a scene befitting so esteemed an icon.

In fact,
The Fan does rise above the initial disapproval. It manages a friction of intensity in its unobstructed pacing. And it is greatly helped by a cast of skilled actors. As a relic, the film makes good on its effective use of New York locations, circa 1980; the story’s seediness is ripened by the ever-present danger of a once fearsome city, when a jackknife, instead of a latte, was usually the object in hand.

The Fan begins with Douglas Breen (played by a fresh-faced Michael Biehn) writing yet another one of his obsessive fan letters to his idol, Sally Ross (Bacall). His letters, like all of Ms. Ross’ fan letters, are received by Ross’ secretary Belle (Maureen Stapleton). Belle has received enough letters by Douglas to know that there’s something quite off about him. She tries to convey this to Sally, but the star doesn’t have the ear or the time for it. 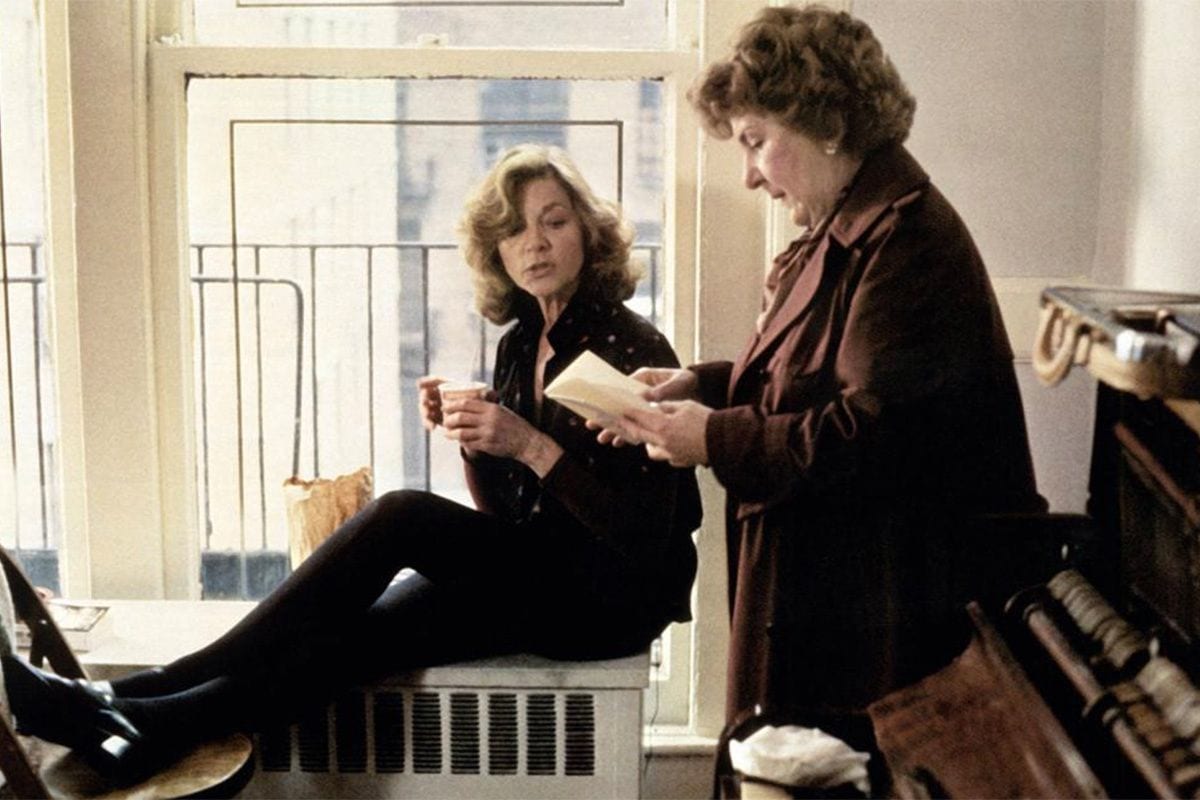 Sally has just been offered a part in a Broadway musical; she’ll be singing and dancing Bob Fosse-esque numbers and she’s more than a little nervous about all the kinds of hitches that could come with such a dubious opportunity. There’s also her ex-husband Jake (James Garner), whom she continues to pine after, despite his new relationship with a much younger woman.

Meanwhile, Douglas is growing more and more impatient with Sally; she’s never written him back personally and he’s tired of getting the runaround from her secretary. Douglas’s letters become ruder and ruder and soon Belle has had enough. She refuses to respond to any more of his mail. Douglas, naturally, doesn’t take too well to this. The young fanatic begins to do away with all those close to Sally until she and him finally meet face to face.

“Unpleasant” may have been a word that was thrown around during the film’s initial press reviews. But a deeper assessment of the film finds “nasty edge” a more suitable term. While The Fan never veers towards the bloodier ends of a slasher, there are certainly a number of shocks to jolt the viewer out of the steady hum of the churning drama. Belle, Douglas’s first victim, is slashed across the face with a knife. It isn’t especially graphic, but watching an actress like Stapleton (a four-time Oscar nominee) struggle so pitifully against a knife-wielding maniac is unsettling. She survives, but the violence of the act lingers.

Douglas’s other victims include Sally’s dance instructor and her maid. Again, the acts of violence are quite nasty indeed (particularly his attack of the dance instructor at the public pool). But they are well placed in the narrative, spurring on the next sequence of events which move the story swiftly to its end. 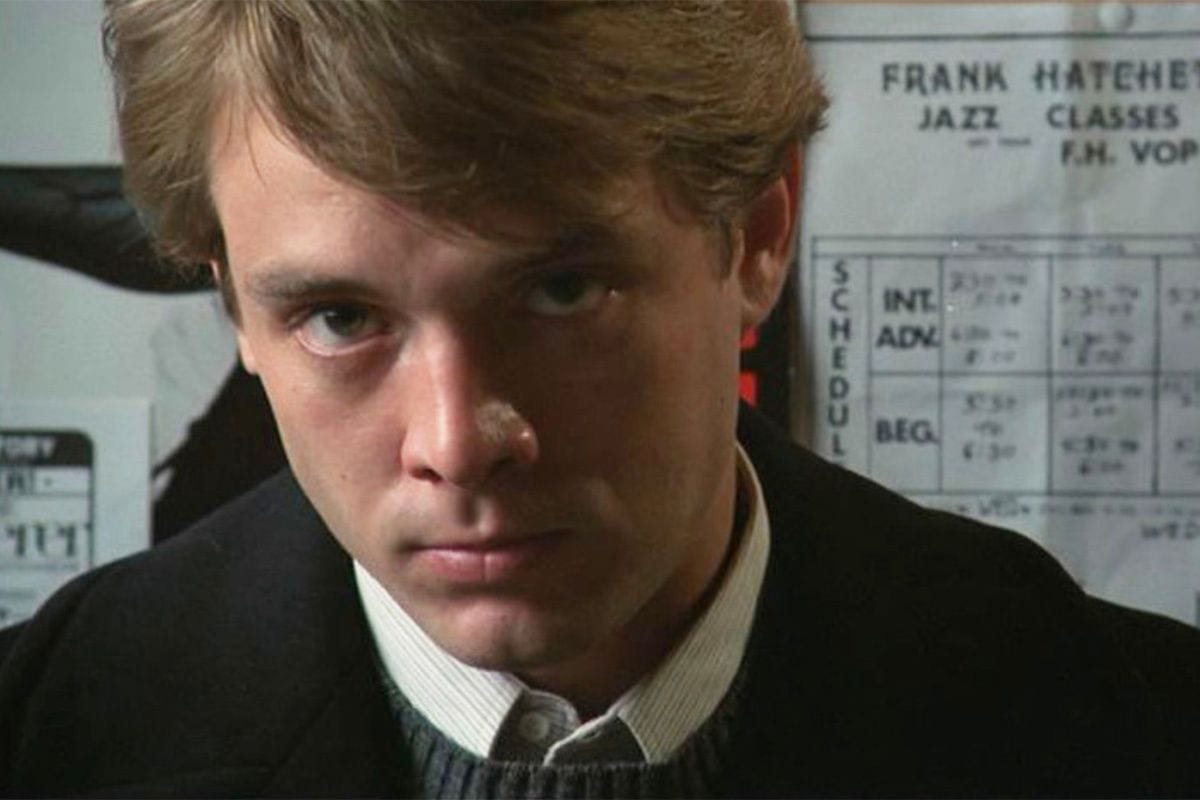 More than anything, The Fan is a moody drama of emotionally confused people and the players involved give pitch-perfect performances. Biehn, in particular, is something to watch. A relatively new actor at the time of filming, Biehn managed to hold his own admirably against such veterans like Bacall, Garner, and Stapleton. Most of his scenes are without dialogue and with very little interaction with the other actors. Yet he evinces a cool and threatening demeanor which grows more sinister as the narrative unfolds. His oddly placid features mask a demented fury that is finally unveiled in the last quarter of the film.

Biehn would go on to achieve fame in such sci-fi action films like The Terminator (1984) and Aliens (1986). But his dramatic abilities are best expressed here.

Bacall, always on point as an actress, does a remarkable job playing a jaded older actress who must add dangerous stalker to her list of growing troubles. But she wears the look of displeasure throughout. And it’s not just because it’s part of her role, either. Bacall, according to cast and crew, was unhappy with the film’s sudden rewrite as a slasher; it wasn’t the film she signed on to star in. Despite her grievances over the rewrites, she puts the adage of “the show must go on” into sincere practice and gives everything she can. The result is a believable portrait of a weary but determined woman who simply won’t allow herself to be taken advantage of. Garner and Stapleton, respectively, make solid support characters and turn in consummate performances.

Shout! Factory’s Blu-Ray release delivers a transfer that is, for the most part, clean and clear of print debris. For a film that’s nearly 40 years old, the print looks great and boasts a healthy amount of film grain throughout. The sound comes through very nicely (it’s mostly a talky film, save for the Broadway musical numbers) and there aren’t any audio distortions.

The extras are wonderful. Michael Biehn, director Edward Bianchi and editor Alan Heim each give interviews about their time working on the film. Biehn’s interview is especially revealing. He divulges his working relationship with Bacall, which was anything but pleasant. He’s fairly candid about Bacall’s treatment towards him during filming. He also reveals one hilarious story about filming with Stapleton, the kind you tell your friends over a round of drinks at the pub. It says a lot about Stapleton’s remarkable work ethic as an eminent actress, as well as her vulnerabilities as an everyday human being.

Biachi and Heim’s interviews are equally informative and reveal quite a bit about the making of this underrated film. A commentary track is also available along with a trailer and a few TV spots.

The Fan was nominated for one award only: the Razzie for worst original song, “Hearts Not Diamonds”, performed by Bacall (rather uncomfortably). That might actually be a reason to see The Fan; there’s still a bit of ’80s kitsch in the film that makes it a weirdly enjoyable experience.

But beyond the shoehorned campiness, there’s a tightly-wrought story here that runs like clockwork, earning a steady momentum toward a stylishly spooky finish. And the collective talents on display cannot be denied.

It seemed a vulgar entry for a star-studded drama at the time. But the years in passing have given The Fan a romantically trashy sheen. The film’s dark charms are sure to give a thrill or two – if you’ll just let it get under your skin.