While well-researched biographies typically depend on people who knew and were close to the subject, Mark Dery uses these interviews and quotes differently in this first-ever biography of screenwriter, illustrator and author Edward Gorey, Born to Be Posthumous: The Eccentric Life and Mysterious Genius of Edward Gorey. From the beginning, Dery makes clear that part of his project is trying to get to the essence of Gorey as a person, and that person’s relationship to his creative work. If this book is a process of investigation, then the information provided by others can be seen as evidence.

Understanding Gorey’s relationship with poet Frank O’Hara, who was for a time Gorey’s roommate at Harvard, demonstrates this. Snippets of interviews with friends of Gorey and O’Hara, including those of poet John Ashbery and novelist Alison Lurie, reflect on Gorey’s self-presentation: was he a dandy, an eccentric, a beatnik, or a queen? Perhaps he was a bit of each, and perhaps that presentation was merely artifice. Gorey clearly embraced the idea from his high school art teacher, Malcolm Hackett, that art isn’t just something you do, it is something you are. This idea served him well throughout his life: he lived completely to his own taste, his own rhythms, and heeded no one’s ideas of who he should be.

In producing his books, Gorey employed 31 noms de plume, many of them anagrams of his name. While working with Poets’ Theatre in Boston after graduating from Harvard University, Gorey wrote two plays: The Teddy Bear, a Sinister Play (1952) was attributed to the playwright Egmont Glebe and Amabel, or The Partition of Poland (ibid) was credited to Timothy Carapace. These pseudonyms, with their touch of absurdity and malice, are akin to the names Gorey chose for his many doomed characters.

Gorey moved to New York in 1953 to start designing book covers for the newly-launched Anchor book imprint. He took to the job immediately, although with a certain witty exception: one of his tasks was to select fonts for use on the book covers, but his lack of familiarity with typography quickly led him to frustration. Dery quotes Gorey’s recollection in an interview with Steven Heller: “I really didn’t know too much about type in those days, and it was simply easier to hand-letter the whole thing than to spec type.” Dery adds, “Everyone went gaga over Gorey’s hand-lettered typography,” which Gorey felt he could not abandon since it was so popular, even though he was indifferent to its apparent charms.

His distinctive style matched well with the new postwar popularity for reading. GIs who were provided books for free by the Army came home and continued as avid readers, many of whom also used the GI Bill to enroll at university. Among Gorey’s friends, Dery finds recollections that the outrageous fashion style Gorey adopted in the early ’50s may have been a reaction to the demands for conformity that would come to be perceived as dull.

Like his ambiguous sexuality, the perceived audience for Gorey’s work becomes a prevailing question in Born to Be Posthumous. Dery provides strong and often humorous evidence that Gorey did not think of children as his audience at all, although his well-known books coincide with what Dery rightly depicts as a transformation in meaning-making about childhood in the United States. Along with Dr. Seuss and Maurice Sendak, Gorey’s books depicted “agents of chaos” who wreaked havoc on childhood. The serious and often deadly tenor of many of Gorey’s books turned childhood on its head. Dery includes a page from The Willowdale Handcar (1962) as one of many excerpts from Gorey to illustrate. The three young characters featured in the story discover a handcar at the railroad station and ride it out of town. Then: “At sunset they entered a tunnel in the Iron Hills and did not come out the other end.” Such is the fate of many Gorey protagonists.

The Gashlycrumb Tinies (1963) is Gorey’s best known work, and renders some of Dery’s best description: “Written in sprightly dactylic couplets, The Gashlycrumb Tinies is a mocking abecedarium steeped in the gothic aesthetic and the real-life horrors of the penny dreadful. It purports to teach children their ABCs through the unhappy (but often hilarious) ends of twenty-six lugubrious-looking children.” He picks “N is for Neville who died of ennui” as an example not only because it’s one of Gorey’s favorite scenes, but also because it speaks to so much of Gorey’s style and aesthetic. Dery notes that Neville “takes an inherently hilarious notion — expiring from world-weariness, a concept only Gorey could dream up — and makes it even funnier by showing us nothing but the top of Neville’s bored little head, his black-dot eyes peering blankly at us out of an enormous window.” Neville is indeed a tiny fleck of a person in the lower right corner of the image. 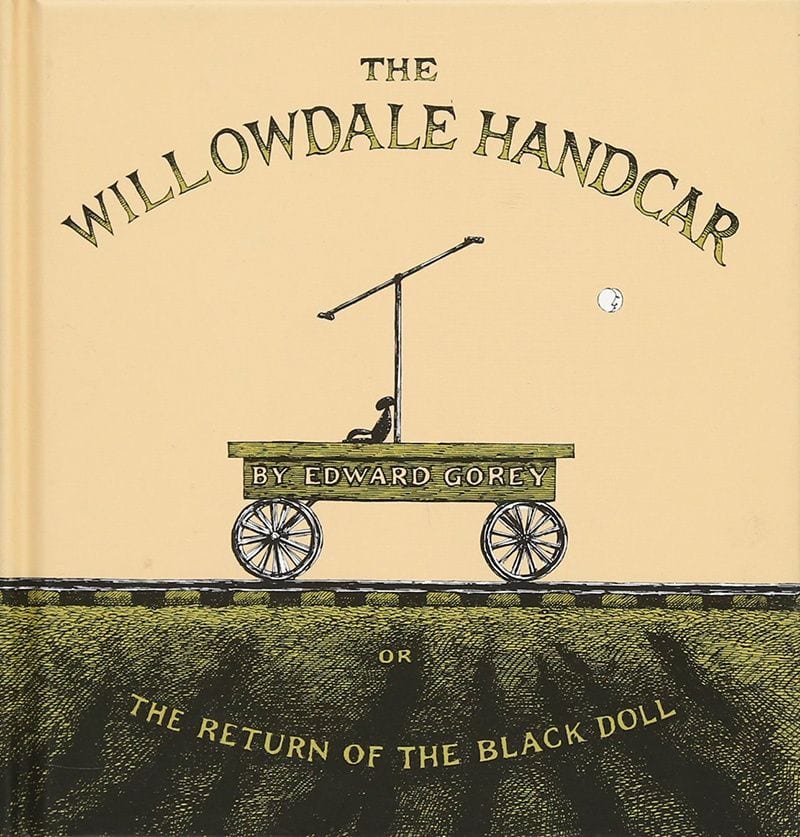 A good portion of Born to be Posthumous is devoted to a kind of literary criticism required for an author and artist like Edward Gorey. His work is never simple and straightforward, although it creates the aura of being so. Rather, the books are absurdist, nonsensical, and complicated in ways that challenge a singular interpretation. In his critique of The Nursery Frieze (1964) Dery turns the confusing text back on the author: “As Gorey would groan, in the middle of movies that drove him bonkers, ‘Can someone please tell me what this is in aid of?'” Regarding one of Gorey’s books published the following year, Dery concludes, “Perhaps The Remembered Visit isn’t really about anything in the conventional narrative sense. Rather, it evokes a mood — a sense of longing and, most of all, the ache of regret, a feeling that sneaks up on us as the years go by.” Here, Dery firmly answers the question of what this is in aid of, an insight that can carry to much of Gorey’s oeuvre.

Gorey never toiled in obscurity, although he might have dramatically embraced a forlorn way of being. His work became familiar to audiences of the ’70s through the stage, the printed page, and television. At the urging of his agent, Gorey agreed to the publication of Amphigorey (1972), a collection of 15 of his previously published small books. The early books had become rare editions that sold at exorbitant prices, well beyond the means of his college-age audience. The affordable omnibus sold well and was considered by the New York Times as one of five most noteworthy art books of 1972. Dery notes the Amphigorey has never gone out of print.

Gorey became somewhat famous and somewhat mainstream — both ideas that he deplored — with the 1977 launch of a Broadway revival of Dracula, for which he designed the sets and costumes. Producer John Wulp arranged for Gorey’s design work and also arranged for the artist to earn ten percent of the profit. The outcome for Gorey was a Tony award (he could not be bothered to attend the ceremony and gave his Tony to a friend, who eventually donated it to the Edward Gorey House in Massachusetts), more than $2 million, and interviews with Us and People magazines. His fan base grew exponentially when his artwork was animated for the opening segment of the popular PBS series, Mystery. 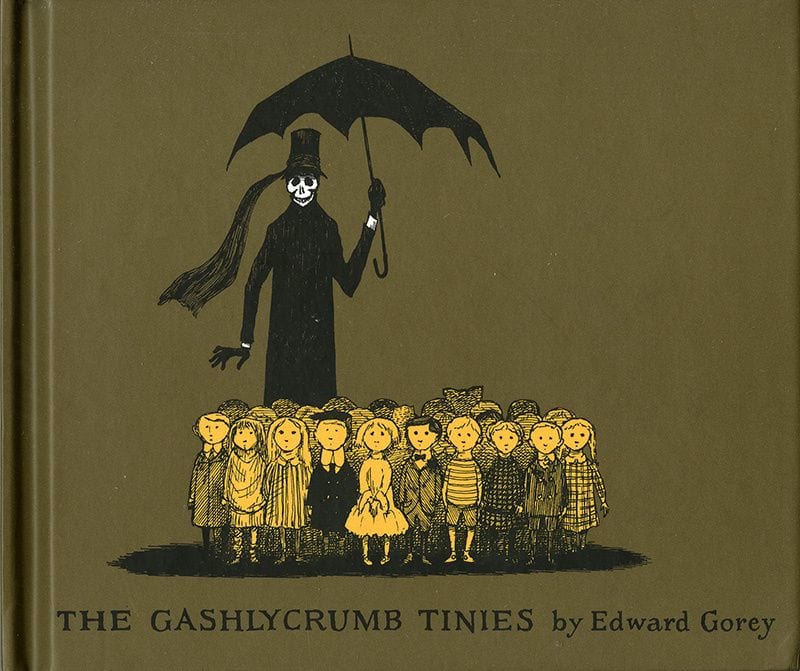 Dery carefully renders as close to a full portrait of Gorey as possible. His insight is welcome, as is his unwillingness to make Gorey one thing or another, which simply would not do. There are reasons that eccentric and mysterious are included in the title, and the reader is glad to be left with that as the last image of Edward Gorey.

Gorey’s Worlds, a collection of four essays and more than 100 illustrations, was published a few months prior to Born to be Posthumous and is a compelling complement for the reader looking for more insight into Gorey’s artwork and its inspirations. Lead author Erin Monroe curated the 2018 exhibit at the Wadsworth Atheneum Museum of Art in Hartford, Connecticut on which the book is based. Gorey bequeathed his personal art collection to the museum in 2001 and Monroe’s essay considers the many collections that the artist called his “accumulations” in the context of his own work. Dance critic Robert Greskovic, who was a member of Gorey’s circle at the New York City Ballet, contributes an essay on the influence of ballet on Gorey’s art and life. Kevin Shortsleeve‘s essay is focused on the influence of nonsense and surrealism in Gorey’s work. In his essay about Gorey’s depictions of humans and animals (some reflecting reality, some delightfully far-fetched), Arnold Arluke echoes Dery’s study: “We should be hesitant to interpret Gorey’s animal depictions too narrowly or literally. Gorey himself offered no explanations.”

Indeed, trying to explain the inexplicable remains an enjoyable endeavor for readers willing to embrace art that cannot be tied to a particular set of meanings or values and compels our engagement for those very reasons. If Born to Be Posthumous and Gorey’s Worlds spur new interest in Edward Gorey, one can expect that a growing appreciation for his work will not undo his mysteriousness or unravel the complex threads of his art.