A costume drama for people who hate costume dramas, The Favourite is often hilarious, always dark, and infinitely weird. Greek filmmaker Yorgos Lanthimos chooses the haughty setting of Queen Anne’s 18th century royal estate for his lesbian love triangle. The technical mastery of Barry Lyndon meets the emotional gamesmanship of All About Eve as we luxuriate in all manner of absurdist debauchery. The Favourite provides deliciously wicked fun that boasts some of the best performances and sumptuous visuals of 2018.

On the continuum of historical accuracy, The Favourite rests somewhere between “based on a true story” and “complete freakin’ fabrication”. History records that England was ruled for a brief period in the early 18th century by Queen Anne (Olivia Colman), whose physical infirmities were rivaled only by her psychological quirks. She was indeed counseled by her lifelong friend and perhaps lover, Lady Sarah Churchill (Rachel Weisz). Finally, there was a chambermaid named Abigail Masham (Emma Stone) who infiltrated the highest levels of the royal house and, perhaps, Queen Anne’s bed. The rest is left to the sordid imagination of one of the world’s most fascinating filmmakers.

At its core, The Favourite is a darkly comic love triangle about three women whose circumstances and personal foibles preclude any chance for happiness. Queen Anne is so insecure that she would rather feign unconsciousness than render a political judgment between the feuding Whigs and Tories. Indeed, her decision making process is strenuous enough to be considered an Olympic sport.

Luckily, she has Sarah to make those decisions for her. Played with a delightfully pointed tongue by Weisz, Sarah is, outwardly, a model of self-control, yet aquiver with inexpressible yearning just beneath the surface. She holds the ear of both the Queen and her husband, the Duke of Marlborough (Mark Gatiss), who commands the royal forces in England’s war against France. This makes her, arguably, the most powerful figure in England at the time; an unofficial title she wields with casual cruelty over her political rivals and domestic servants.

It’s the sort of intoxicating power that creates blind spots; a blind spot that Sarah’s lowly cousin Abigail is eager to exploit. Lost in a card game at the age of 15 by her father, Abigail learned the cutthroat art of self-preservation. She’s a junkyard dog who, ironically, arrives on Queen Anne’s doorstep covered from head-to-toe in stinking mud. Sarah mistakes her for a pitiful family reclamation project.

“I have a thing for the weak,” Sarah condescends. It’s a mistake Sarah comes to regret, as Abigail proves surprisingly adept at manipulating her way into Queen Anne’s confidence. 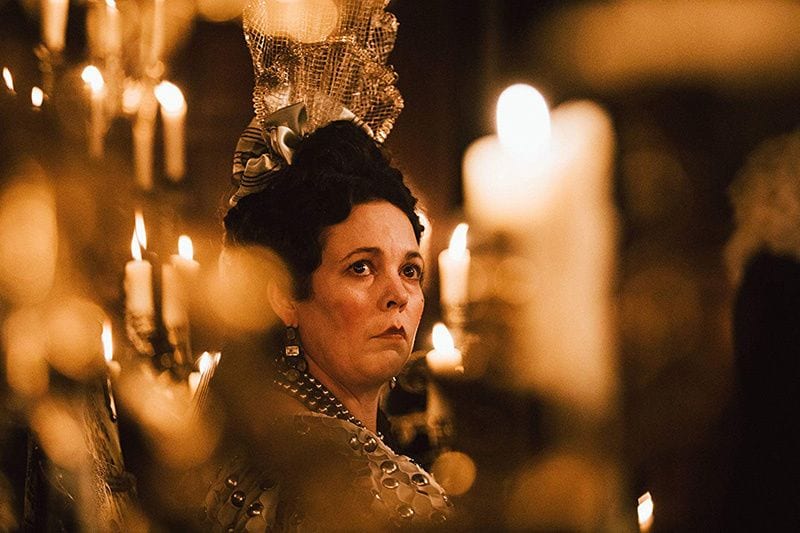 This love triangle flourishes amidst the grotesqueries enabled by unbridled wealth and unlimited time. Frantic ducks race around the palace floor to the cheers of betting nobles, a cackling naked fat man is pummeled by blood oranges, and an elaborate 18th century costume ball showcases some fabulous 21st century dance moves. It’s all wonderfully bizarre and yet Lanthimos (The Killing of a Sacred Deer, 2017, The Lobster, 2015) presents this world with ravishing realism.

Though not entirely period accurate, the costumes and set design are exquisite. Lanthimos utilizes wide angle lenses to capture rooms from floor to ceiling, cramming each frame with meticulous detailing. Tapestries dwarf a tiny Abigail as she awaits an audience with the Queen, elongated corridors echo with the giggles of unseen revelers, and natural lighting blankets everything in a cozy softness.

Indeed, cinematographer Robbie Ryan creates startling compositions with only sunlight, shade, and an army of candles. If Lanthimos hadn’t already drawn comparisons to Stanley Kubrick for his use of lens and light, The Favourite, bathed in Barry Lyndon inspired shafts of light, would solidify those claims. 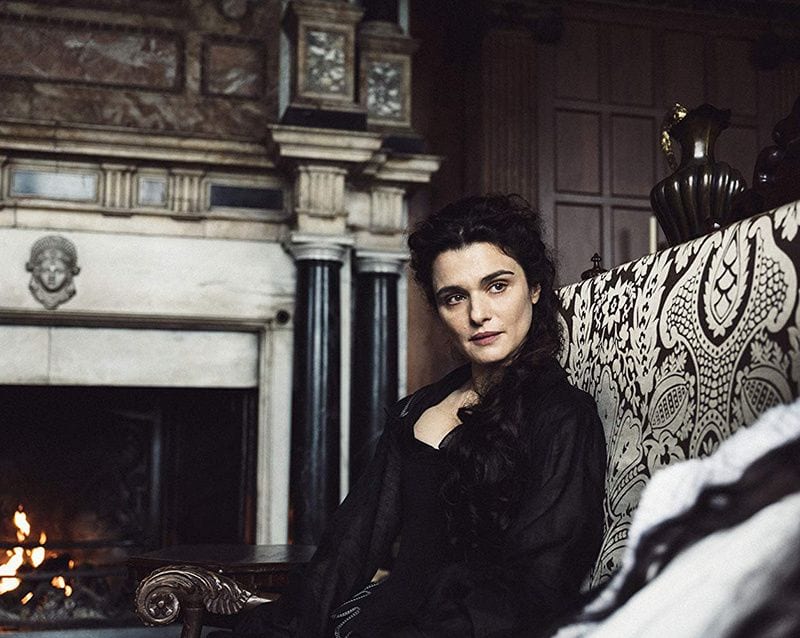 What makes The Favourite so damn irresistible is how well it mixes comedy and tragedy in what is, essentially, a simple bedroom farce. The future of England is very much in doubt, its coffers emptied by protracted conflict with France. Yet, behind the palace doors, Queen Anne is carted about in a ridiculous sedan chair and gorging on pastries until she literally vomits. Meanwhile, Sarah and Abigail casually exchange thinly veiled threats as they shoot live pigeons. The disconnect between Queen Anne’s whims and the wishes of her subjects is ludicrous and feels eerily familiar to America’s current political quandary.

The three central performances from Colman, Weisz, and Stone are mesmerizing. Colman, in particular, is a spectacular specimen of restless nerves. She embodies a Queen who is both comical and tragic, forced to the throne due to a lack of successors in her royal line. You laugh when she flops around like a spoiled child demanding attention, but your heart breaks when she discusses her 17 dead children. “Some were born blood,” she relates, an admission that both saddens and sickens. Her bedroom teems with 17 rabbits, each bearing the name of a lost child. 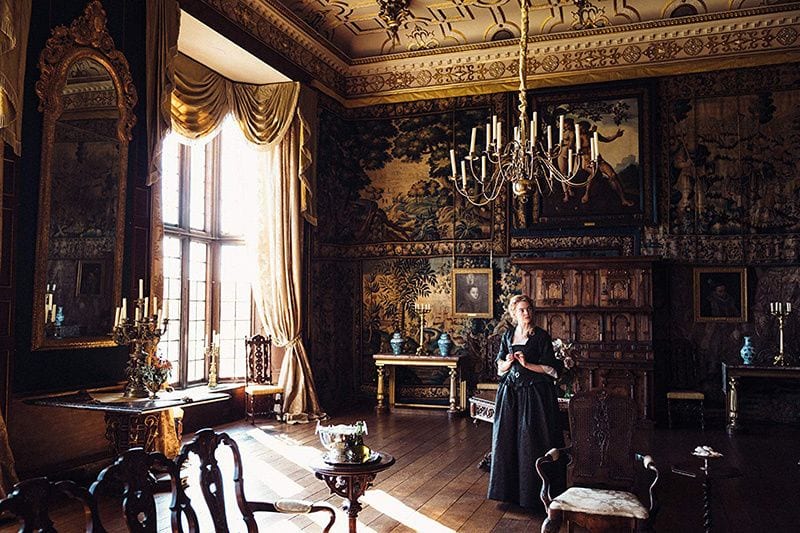 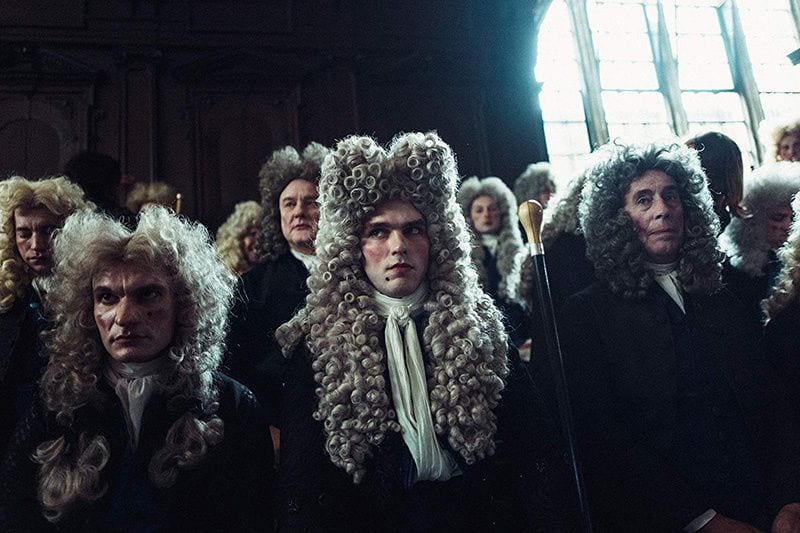 Also of note is the ribald supporting performance of Nicholas Hoult as Robert Harley, the leader of the opposition Tories. Sensing an opportunity to thwart his arch nemesis Sarah, Harley cozies up to Abigail in the most amusingly passive-aggressive manner possible. He needs her help, but that doesn’t mean he wants to physically touch a peasant! His over-the-top persona, characterized by a menagerie of powdered wigs, is a glorious departure from the mannered nobility that populates most costume dramas.

It’s fascinating to watch political intrigue focused entirely on female characters. Their ruthlessness lies in a deeper, more spiritual place than their male counterparts. Sarah and Abigail don’t just want the prize (Anne)… they want the prize to disown and abandon the loser. It’s a game that nobody can truly win. The Favourite embraces the humor and hubris of royalty behaving badly to deliver one of 2018’s best films.