For an introspective singer-songwriter who has recently experienced the death of her mother and the disintegration of a 12-year relationship with her main man, Jenny Lewis seems pretty damn cheerful these days.

“Yeah, man, happiness, huh? It’s kind of subjective, right?” the charming indie rock/pop star warrior pondered on May 16 before an adoring crowd. They were stuffed into the 1,500-capacity Ogden Theatre in Denver, cheering, screaming and whistling right after she and her five-piece band performed “Happy”.

The slow-building song from 2006’s Rabbit Fur Coat, her solo debut album featuring the Watson Twins, is soaked in more irony than mirth, but it’s hard to tell if the hardened lyrics were lost on all the smiling faces merrily sipping their mixed drinks (minus the straws) and craft brews.

“They warn you about killers and thieves in night / I worry about cancer and livin’ right / But my mama never warned me about my own / Destructive appetite.”

Of course, the former child star of Hollywood, who still gets to rub elbows with Academy Award-winning royalty like Brie Larson, Anne Hathaway, and Mary Steenburgen, knows how to act around a crowd. But as emotionally distraught and distressed as her songs can feel, it’s Lewis’ hopeful grin, acerbic wit, rock-solid yet crystalline voice and infectious melodies that genuinely capture our hearts.

This California Dreamer deserves to have her perpetual fun-in-the-sun day. For one glorious night in Denver, at least, the clouds in her life seemed to vanish into the Mile High thin air.

Touring behind her fourth solo album, On the Line, which was released in March, Lewis was glowing under mostly muted lighting during a 90-minute set that included 20 songs, three neon-lit phones, a heart-themed set later bombarded by jumbo balloons, and one glittery, glamorous dress that could have been made for the show-biz 1960s or swinging 1970s. 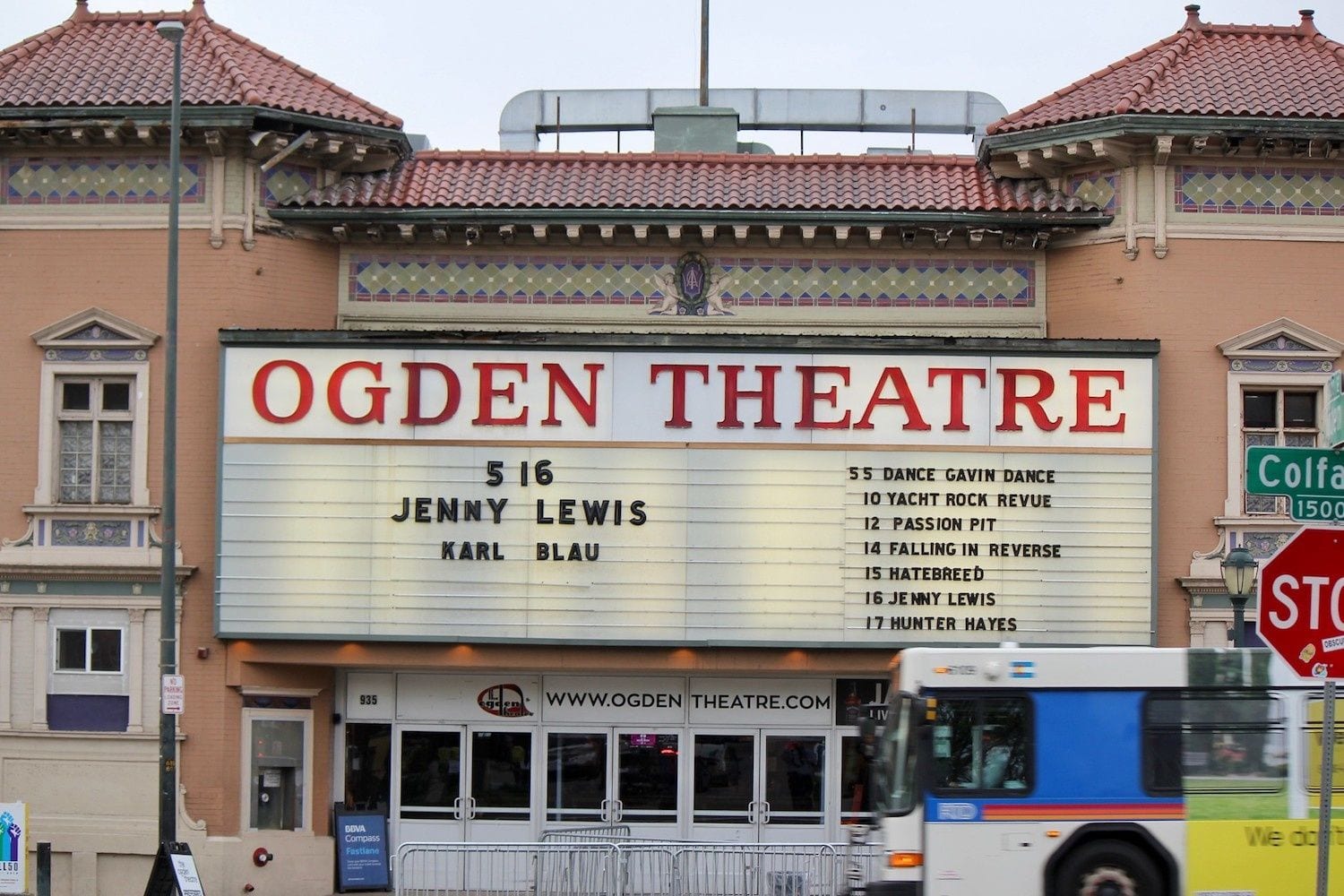 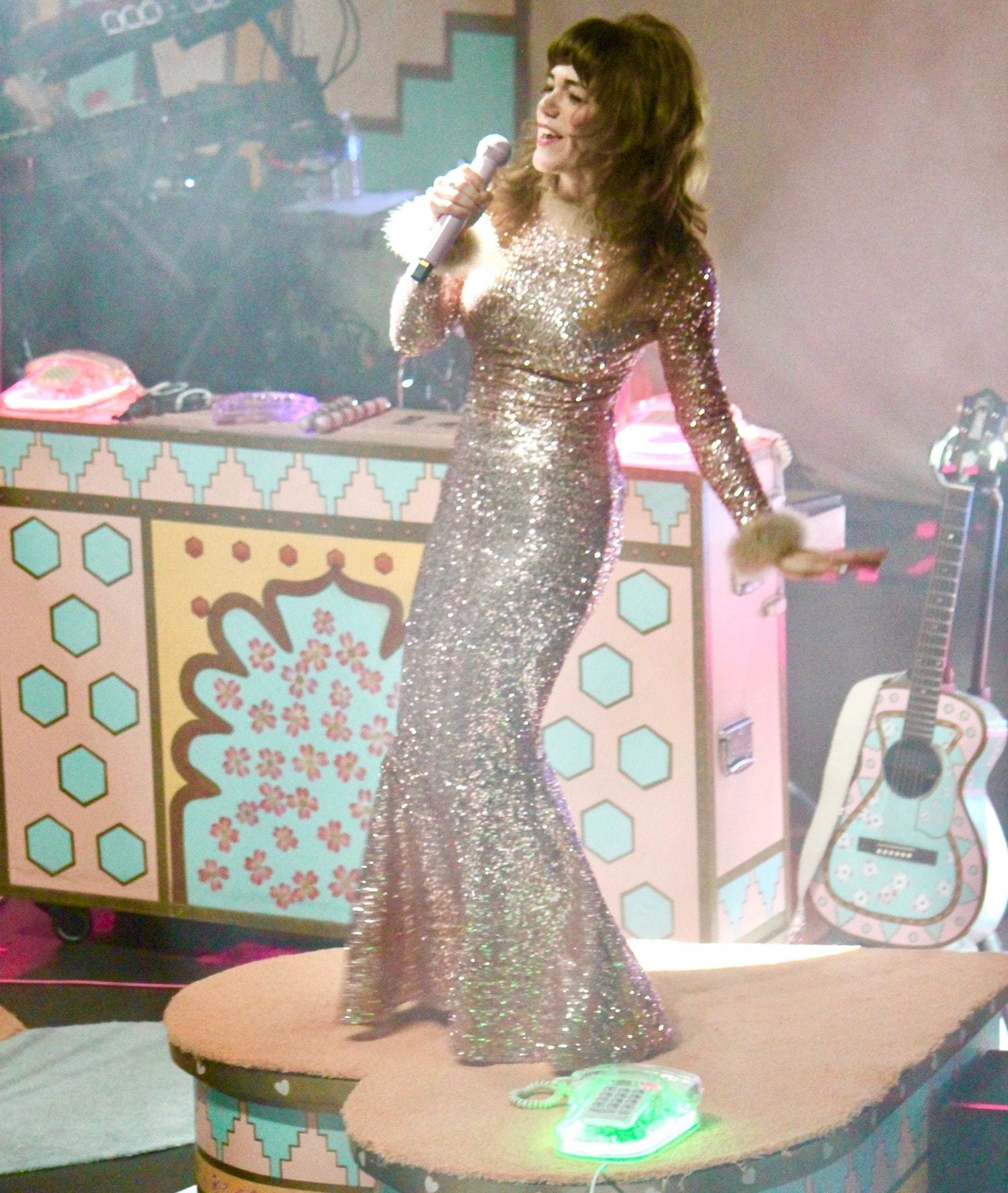 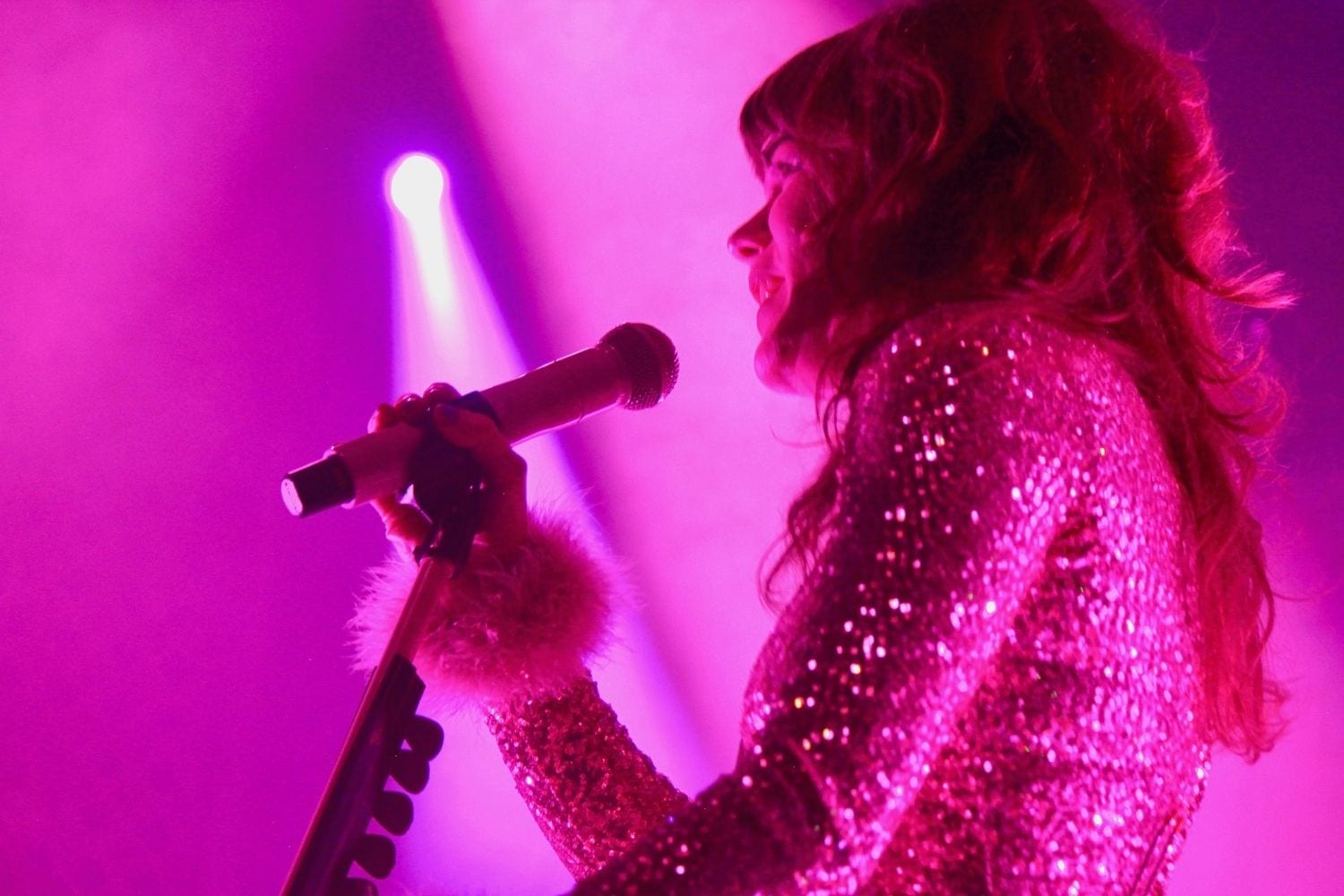 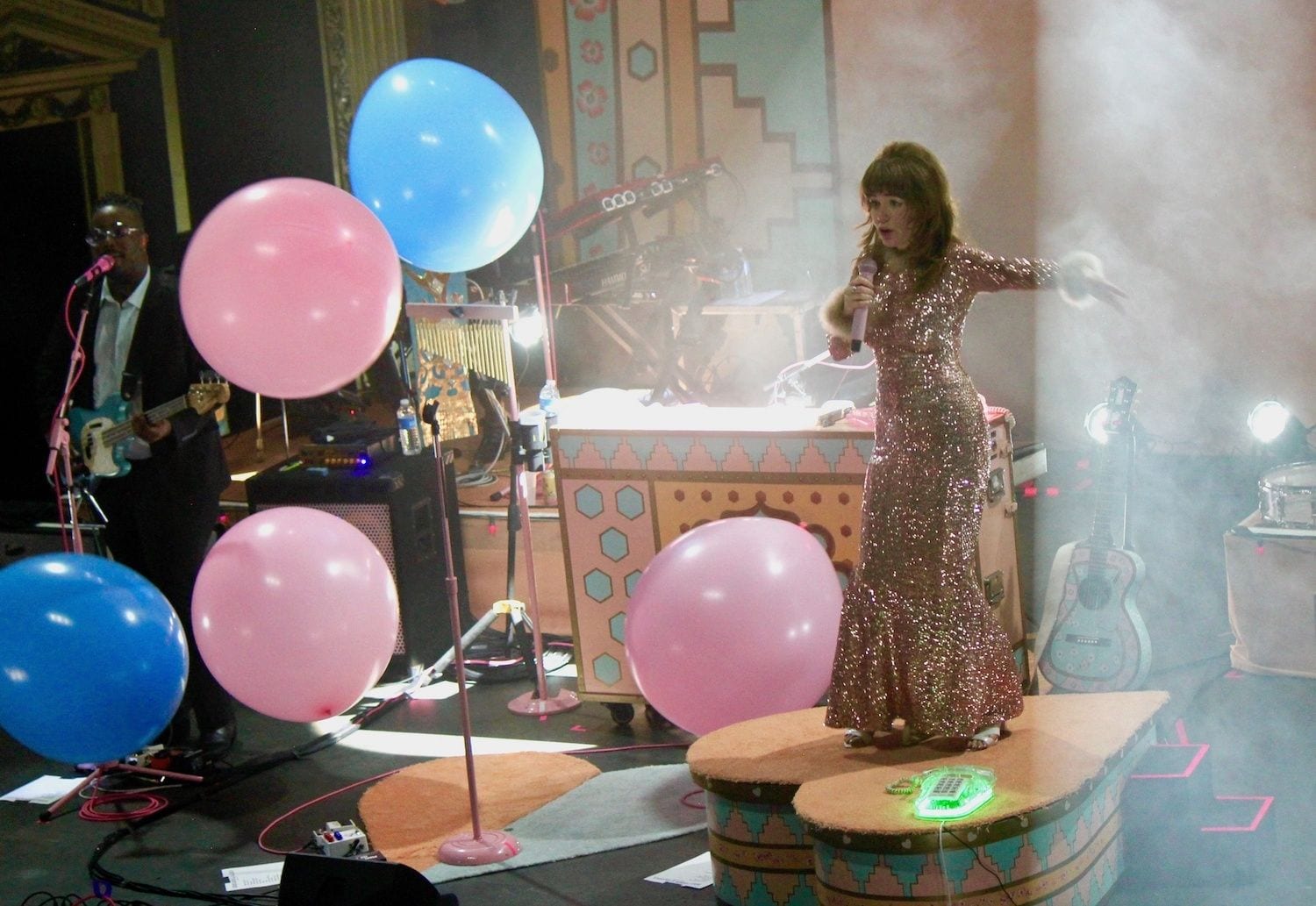 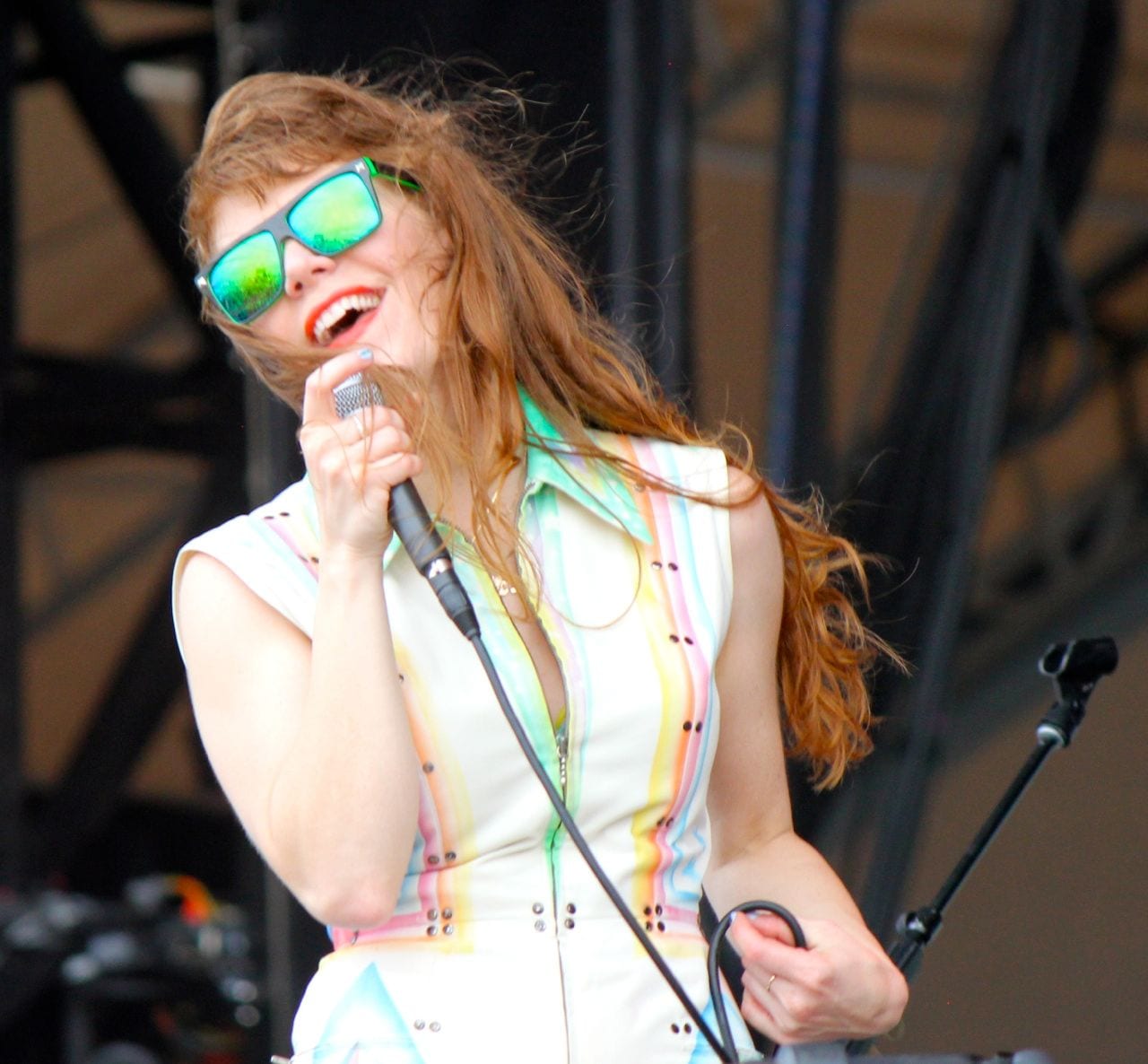 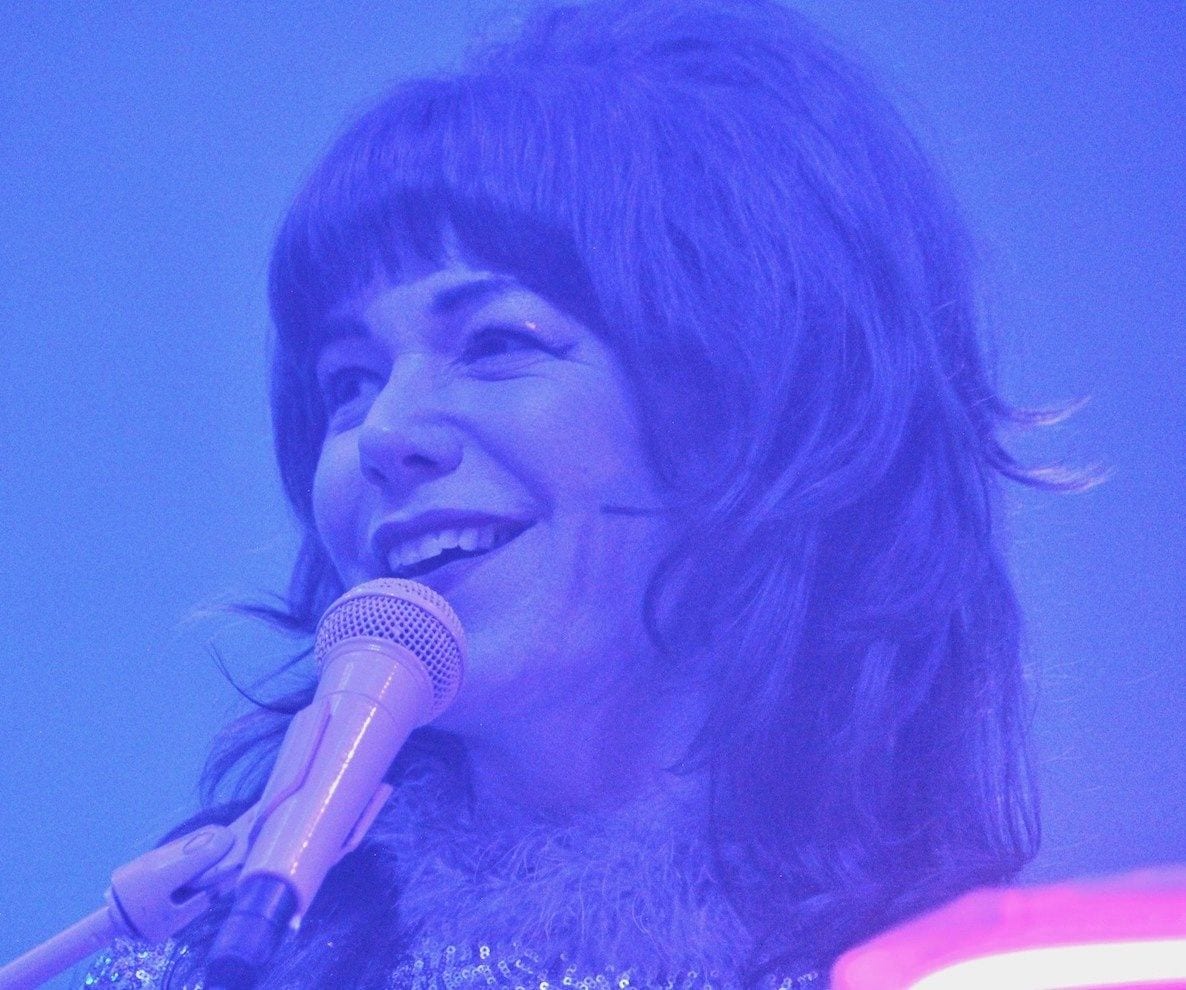 It was a slow reveal, though. Lewis’ face and retro-fitted bouffant with the ever-present bangs, ranking alongside prime-time love-me-‘do divas Linda Ronstadt, Loretta Lynn and the Bangles, were her only visible features as she sat behind the piano to open the show.

“Heads Gonna Roll” and “Wasted Youth,” two sardonically titled but pleasant-sounding mid-tempo numbers despite the mature subject matter, also kick off On the Line. Beck, Ryan Adams (before the fall) and Shawn Everett share production credits on the album with Lewis, while musical contributors included notable classic rockers such as Heartbreakers keyboardist Benmont Tench, session drummer Jim Keltner, Rolling Stones producer Don Was and none other than Ringo Starr.

While the guest appearances were impressive, the album’s 11 exceptional tracks were all written by the one and only L.A. Woman described by the New York Times as “a stylish performer who defies genre and salts her songs with a sly and off-kilter intelligence”.

When Lewis did emerge from the dark blue hues into the Ogden’s bright lights, her shiny, sleek outfit fit the mood, whether she played her multi-colored acoustic guitar or shook and shimmied on a heart-shaped riser like a Hullabaloo go-go dancer while keeping the show’s other moving pieces running as efficiently as those jugglers on Ed Sullivan.

Only one other new album selection (the playful “Do Si Do”) made its way onto the first-half set list. Fans were thoroughly satisfied to cheer and sing along with equal doses of enthusiasm for songs from Rabbit Fur Coat (including “The Big Guns”, “Rise Up With Fists!!”, and “Happy”, which featured a violin-electric guitar interlude) and 2014’s The Voyager, with “She’s Not Me” getting a violin-cello enhancement. A new reggae-infused version of the title cut from the latter album was introduced with Lewis’ suggestion sealed with a drawn-out hiss:

Maybe Lewis, who has launched a line of pre-rolled joints through Glass House Farms called the Rabbit Hole, has a real need for weed to deal with the ups and downs an artist endures during strategic dates with destiny. But she seems high on life, too, using that creative mind to give the bleakest human being a reason to believe.

Finally greeting the crowd at Song No. 6 (“Good evening, Denver. What’s up!”), Lewis once again found her “Silver Lining,” the bubbly swan song she wrote before shutting the door on Rilo Kiley, the Los Angeles-based band she co-founded with Blake Sennett in the 1990s.

On 2007’s Under the Blacklight, the group’s final studio album, the opening song includes the memorable send-off line — “I was your silver lining but now I’m gold” — that officially signaled the end of one professional run and the beginning of another. Though Lewis did break away from the band to record and tour behind Rabbit Fur Coat with the Watson Twins (including a co-headlining show with the North Mississippi Allstars I saw at the Fillmore Denver in 2006), she did return to the road again with Rilo Kiley.

During a four-month period in 2008, I witnessed the devastating epilogue of a fan favorite from that era — Rilo Kiley on May 19 at the Ogden — and the promising prologue of a solo career shifting into gear — Lewis on September 17 at the Bluebird Theater, a cozier venue a few miles east down Colfax Avenue.

With Stennett, her onetime ex, also in the rearview mirror, it did spawn another professional/personal relationship, this time involving Johnathan Rice. The singer-songwriter played on Rabbit Fur Coat and was a member of the 2006 touring band, then continued on the road again after collaborating with Lewis as producer, co-writer and guitarist on 2008’s Acid Tongue, her second solo album. Among the six songs they co-wrote were rave-ups such as “Jack Killed Mom” and “The Next Messiah,” both of which unforgettably ignited the Bluebird crowd in one of the first concerts I covered as a music journalist.

Also worth remembering: On the set list that night to open a three-song encore was a cover that Lewis performed as a tender, tingly duet with Rice. It’s telling title — “Love Hurts”.

By 2015, when I watched Lewis on a much larger stage at the Hangout festival along the Gulf Shores beach in May, Rice was out of the picture. She was seemingly at ease while threatening to take a dip in the saltwater after playing songs such as “Girl on Girl”, which she had written, then debuted with Haim at a benefit concert the previous month. But sadness took over in 2017, when her mother Linda, a longtime heroin addict, died of liver cancer that October at age 70.

“It’s lonely when you lose people,” the 43-year-old Lewis confided in an interview at huckmag.com posted a day before the Denver show. “It’s really scary to be on your own, to be a single orphan in the world (Lewis’ father Eddie Gordon died in 2010). But I don’t feel jaded and I don’t feel old. I’m just making my records and I hope I can make them for a little bit longer and find a little happiness and get laid along the way.”

So maybe it’s within reason to consider that the stage and the studio remain two of the places where Lewis, who sang it “feels good to be free” on Rilo Kiley’s “Breakin’ Up,” continues to find peace, satisfaction and, yes, some sense of love, at this stage of her life.

Besides running into longtime loyal fans and connecting with legions of newbies unfamiliar with her TV and movie past, she is reunited on tour with longtime Rilo Kiley drummer Jason Boesel among a group of relatively recent additions. Multi-instrumentalist Jason Crosby, dazzling guitarist Dylan Day and splendid harmonizers Solomon Dorsey (bass) and Emily Elbert (guitar, keys) help to put a fresh face on a reinvigorated act that’s bolstered by Lewis’ latest material.

Six of the set’s final 10 songs were from On the Line, with three of the best including the title cut (heightened by cool chimes and a phone’s dial-tone ending), “Party Clown” (an encore favorite) and “Little White Dove,” a bluesy tribute to her dying mother that Lewis started writing during hospital visits.

Was it a dream? / When you called me kitten and her majesty / I’m your blood, I want more / The water from my eyes fell to the floor.

At that point in the show, the giant blue and pink balloons were dropping from the balcony, another transition from the dark to the bright side. Then heading into “Born Secular,” the goosebumps-inducing Rabbit Fur Coat song with those precious harmonies, Lewis dropped the “L Word” on the audience.

“I want to take this opportunity, just looking at all you beautiful people here. The person standing next to you, introduce yourself,” she urged. “Say hello; say hi. … If it’s someone you know, tell them you love ’em. It’s OK to say you love someone; tell ’em you love ’em.”

The mood soon got more romantic as the stage went dark, fulfilling Lewis’ “we can finally be alone” wish while she asked cellphone users in the crowd to supply the only source of light. The illuminated band played “With Arms Outstretched,” the still-magnificent track from Rilo Kiley’s 2002 The Execution of All Things, with the lead singer capably taking her devoted disciples down the righteous path before she exited the stage.

The few remaining balloons started to pop like firecrackers, and the singalong spectators segued into “Jen-ny, Jen-ny” chants as a plea to hear more, more, more. Those rhythmic bursts of joy also served as a thunderous roar of approval that gave way to a killer three-song encore worth seeing under the house lights.

With miles of smiles left before reaching the Promised Land, it sounds like the Little White Dove still searching for love and happiness knows where to go. Just watch Jenny Lewis do the best she can to grin and find it.

See more photos of the Jenny Lewis show at the Ogden Theatre in Denver.