Joni Mitchell‘s career will be forever characterized by evolution. In her own words, a “painter derailed by circumstance”, the Canada native burst onto the California music scene as a vanguard of the American folk revival with her albums Song to a Seagull (1968), Clouds (1969), and Ladies of the Canyon (1970). Each release yielded legendary singles that wholly epitomized the countercultural zeitgeist, from “Both Sides, Now” to “Big Yellow Taxi” to “Woodstock”. (The latter famously covered by Crosby, Stills, Nash, and Young.)

But archetypes have never interested Mitchell—even archetypes she herself creates. Shattering the mold with her now-iconic 1971 LP Blue, an almost frighteningly-intimate album of introspection, her next two releases, 1972’s For the Roses and 1974’s Court and Spark, saw the paradigm-shifting singer-songwriter veer off the coffeehouse path and into the realm of pop (the latter becoming her biggest-selling album, boasting the Grammy-nominated Billboard Top 10 hit “Help Me”), which landed her on the cover of TIME Magazine before the age of 32.

Unbothered by the demands of the marketplace, Mitchell astounded her followers with 1975’s jazz-infused The Hissing of Summer Lawns, and its equally-experimental follow-up Hejira (1976). By the time she collaborated, controversially, with jazz legend Charles Mingus on 1979’s Mingus (the final album before his death), Mitchell had lost all mainstream radio airplay. It seemed those first loves—the painting, and the poetry—were resurfacing. Was she now the “singer derailed by circumstance?” 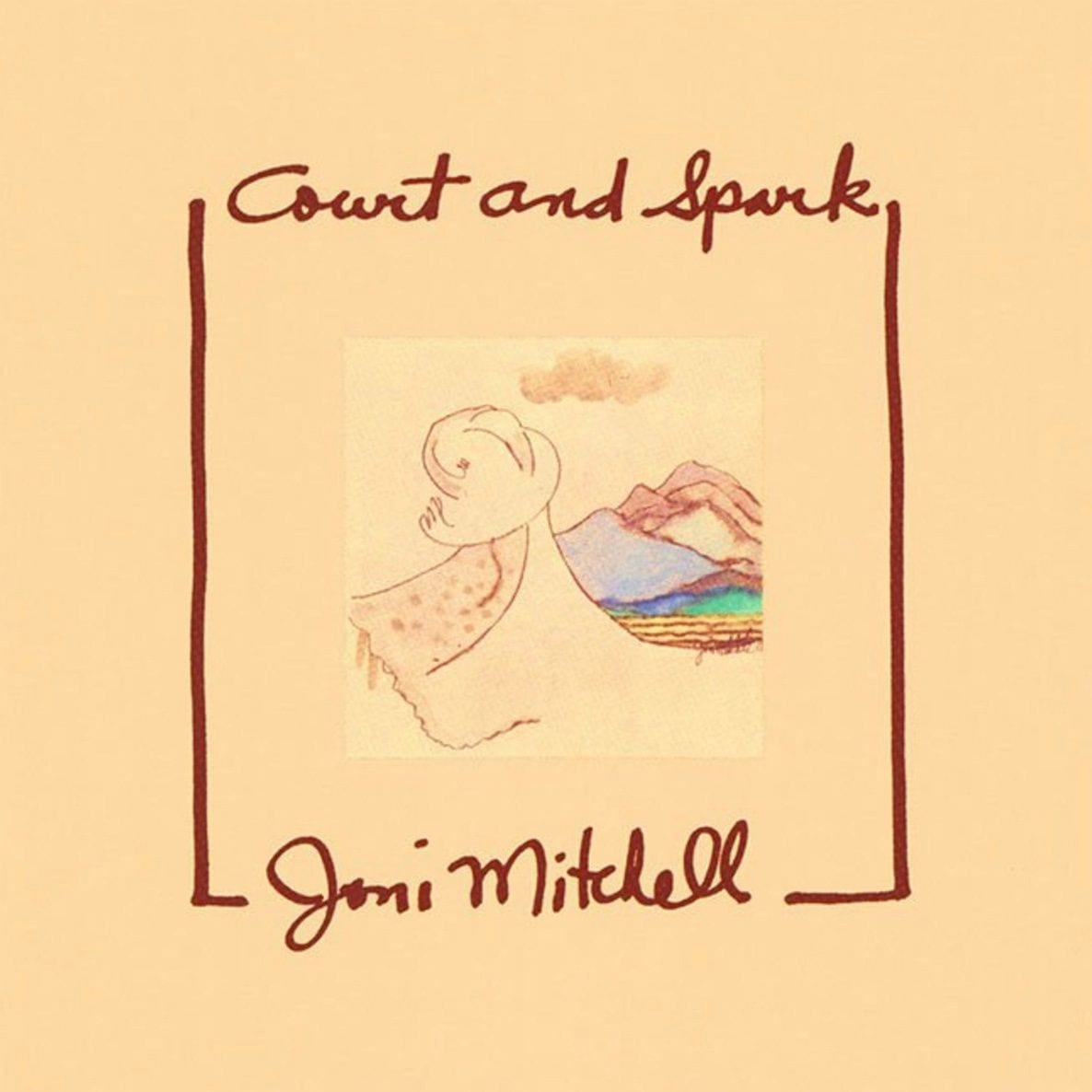 Since the 1980s, Mitchell’s talents, as both a fine artist and a musician, have managed to share the spotlight, though not as mutually-constitutive elements of her repertoire. Joni Mitchell “the studio artist” and Joni Mitchell “the singer-songwriter” seem to occupy separate spaces in the pop cultural consciousness, and even Mitchell herself seemed to perpetuate this mythology, noting in a 2013 CBC interview that the mediums “are different languages” for her.

Morning Glory on the Vine, a newly-released collection of drawings, poems, and lyrics, viewed previously only by her closest of family and friends, denotes the next step in the Joni evolution. Furthermore, it indicates that perhaps those different languages—of visual art, poetry, and music—will finally be held in equal regard.

In the foreword to her book, Mitchell lays bare the origins of her compilation. Having constantly carried a sketchbook around during the early-1970s, she found herself, in her private life, leaning more into her visual creative tendencies as opposed to her musical ones, even as Ladies of the Canyon and Blue were topping charts around the globe. (Mitchell notes that she had to be dragged on-stage while stalling to sketch her audience before a performance in Central Park). Such an instance illustrates the industry’s attempts at siphoning Mitchell’s talents into one commoditized, creative well during the early years.

Mitchell goes on to tell us that, fortunately, her manager Elliot Roberts and agent David Geffen compiled her work into a limited-edition printing dubbed “The Christmas Book”, which she gave to a handful of family and friends that December. Thus, October 2019 is the first time Morning Glory on the Vine has seen the light in nearly 50 years, and the first time it has ever seen the light as a publicly-accessible item.

Like most anything Mitchell touches, her book is a stroke of genius. Fans will find enthralling the opportunity to see some of Mitchell’s most famous songs outlined in her handwriting—some already having been recorded by the time of the book’s creation, and others still in developmental stages. Newcomers to Mitchell’s oeuvre will find similar inspiration in the same words, absorbing the artist’s creations in a melody-free forum that may lead to closer first-listens of her music than if never before read on paper.

Each page manifests a life of its own—from culturally-omnipresent images (i.e., the famous Court and Spark album artwork), to random but undoubtedly sumptuous diversions, such as an abstract portrait of Georgia O’Keeffe, or a still life study of Mitchell’s sun-dappled Laurel Canyon dining room. Content and form operate in revelatory ways. The arid, sun-soaked palette of which Keeffe’s visage is comprised, rendering the artist inseparable from the desert landscape that surrounds her, speaks volumes of the inseparability between “creator” and “creation”. This is a quality integral to Mitchell’s own work.

This visual smorgasbord is anchored effectively by her writing, which begins in 1960 with the poem “The Fishbowl”. It’s about Mitchell’s disdain for show-business, and continues through the advancing stages and albums of the artist’s lived experience.

There is an ethereal confluence about the material, which aligns all of Mitchell’s skills into a single, unfettered platform for expression. The music couldn’t exist without the poetry, and the poetry couldn’t exist without the art, and the art couldn’t exist without the music. In fact, and unbeknownst to many, they have been inseparable all along. Legendary songs (i.e. “River”, “Ladies of the Canyon”, and “You Turn Me on I’m a Radio”), whose lyrical exceptionalities lend them an artistic wholeness that would seem stifled by any kind of supplement, are granted drawings that provide the layers of comprehension and complexity we didn’t know we needed. It is a mosaic equal parts fulfilling and thrilling, Mitchell’s canon inhabiting a newer, more tactile life before our eyes.

But Morning Glory on the Vine is not only a book of synthesis; it, too, is a work of deft confessionalism akin to an album like Blue. Some of the art validates our deepest contemplations about certain songs, like “Blue”. long believed to be Mitchell’s tragic love letter to James Taylor. One cannot help but recognize Taylor’s silhouette in the lyrics’ accompanying drawing—a long-haired guitarist, bedside, head bowed, staring at ocean waves through the window. It is in these moments that we feel Mitchell has brought us full circle, and that we may never have understood “Blue” in its entirety without this missing puzzle piece.

Mitchell has understood all along the public’s fascination with celebrity mythos, her music often co-opted by listeners and critics to mine for the details of her private life. She has quite successfully championed the music, and her goal that it lead to one’s own personal introspection, for decades. Now, she is unleashing the full picture. As noted in her effectively-sparse but telling foreword: “Work is meant to be seen, or heard, as the case may be. It’s always exciting to launch your work into the world.”

Knowing the ex-lover to credit for the heartbreak, or breakthrough, of a specific song does not lend us more power. It does, however, validate Mitchell’s authenticity—not only in her openness, but the fact that she waited 40 years to be so open. She marched to the beat of her own drum in releasing Morning Glory on the Vine, and all of its intrinsic emotional intricacies.

Then again, Joni Mitchell has always marched to the beat of her own drum. That’s why we love her.

Morning Glory on the Vine bears fruits both retrospective and prospective, celebrating a lifetime of brilliant artistry, and looking ahead at the next phase—not only in Mitchell’s own life and career, but in the state of the world at large. In times of turmoil, we must reclaim our humanity. Joni Mitchell has been reclaiming, and affirming, her humanity (and ours) for five decades. Her latest masterwork continues, ever so genuinely, in that grounding and illuminating tradition.