Mamma Mia ! Here We Go Again begins a decade after the release of the original film. Sophie (Amanda Seyfried), who set off the events of Mamma Mia! by looking for her biological father, is at an impasse in her life, trying to turn her mother’s beloved old Hotel into a viable holiday destination. With her husband Sky (Dominic Cooper) working overseas and one of her father’s (Pierce Brosnan) in a slump, progress is slow and that is without the devastation that could follow a predicted storm. Sensing she needs help, Sophie calls on her mother’s best friends Tanya and Rosie (Christine Baranski and Julie Walters, respectively) to liven up the redecoration and help organise the grand opening. Whilst together, Tanya and Rosie reminisce about their youth as Oxford graduates and tell Sophie the story of how Donna (played by Lily James in the past timeline and Meryl Streep in the present one) found herself in Greece in the first place.

Mamma Mia! Here We Go Again has less of a plot and more of a series of set-pieces that link loosely together — giving it the feel of a, particularly sunny, mini-series. Whilst this isn’t a problem, it does contribute to an overall tonal whiplash and a lack of stakes that can make the big emotions of display feel a little lifeless. That is, until another song comes along and the film launches into vibrant, emotionally resonant life. To its enormous credit, the film understands what makes ABBA such an enduring, beloved pop-culture staple; the idea that life is a series of emotional peaks and valleys and everyone’s emotions are valid enough and important enough to sing about. It’s a jukebox musical that completely understands the power of the songs at its disposal, arguing less that the songs are good, so much as that the songs are meaningful. Mamma Mia 2! Here We Go Again all but mutes discussions of good and bad; it is so brazenly interested in getting audiences to clap and cry that the only barometer of its success is how people feel watching it.

The film’s variation on Abba’s “When I Kissed the Teacher” is a buoyant, genuinely well crafted treat (that circumnavigates some of the more questionable elements of the song by making Celia Imrie the object of young Donna’s affections.) It has a finesse that none of the musical numbers in the original possessed, a visual prowess that extends to the funny and moving knock-about comedy of “Angel Eyes”. As ABBA’s most indelible hits were used in the original movie, the sequel has to pull up deeper cuts, including the prettily sparse “Andante, Andante” and a visually clever “One of Us”. Generally, the songs are more melancholy this time around, which adds depth to a story that occasionally struggles to anchor itself — “I’ve Been Waiting for You” is particularly articulate in revealing the longing behind much of the plot. Perhaps most memorable is Cher’s bizarre, but captivating, rendition of the 1976 classic “Fernando”. Cher performs the song as if it is a State of the Union address, bringing a contextless gravity to the song as she dances in front of fireworks and squeezes every last bit of juice out of her solo. 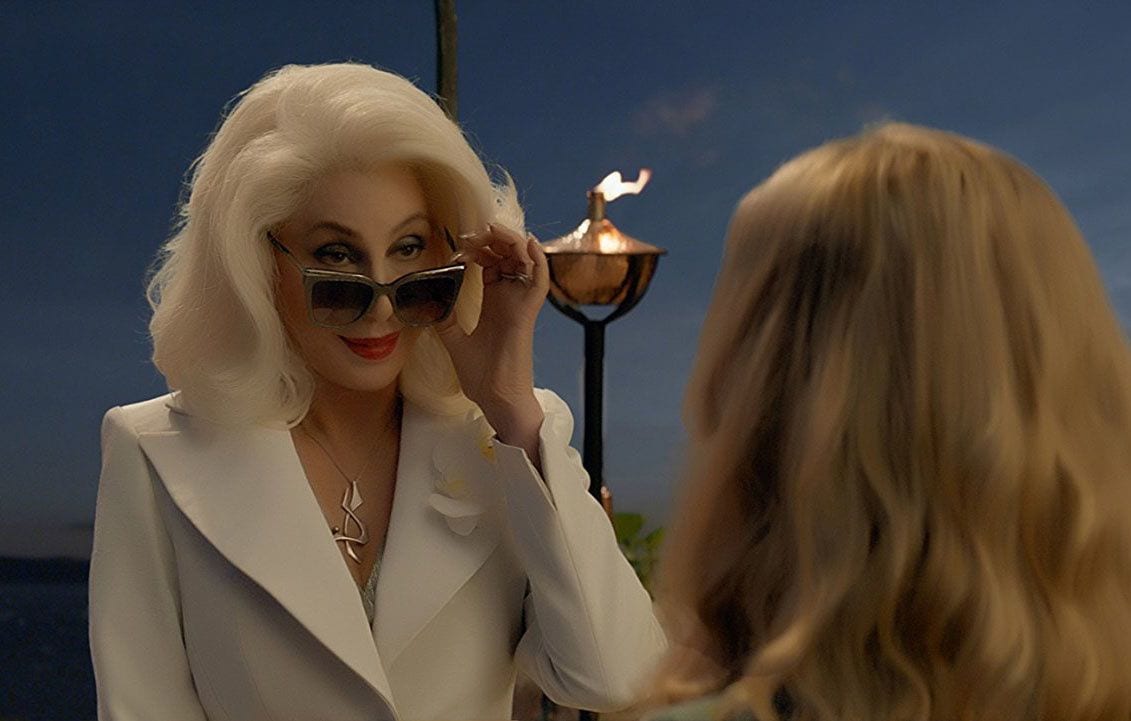 Compared to its predecessor, this Mamma Mia! Here We Go Again is a more melancholy, nostalgic affair. It may seem weird to think of a movie like this as having an emotional thesis statement, but it does and it goes something like: nostalgia is good and cathartic, as long as, it helps you live in the present. So much of this sun-soaked trip to Greece is about heritage and legacy that it sometimes struggles to stand on its own two feet. In so many ways, Mamma Mia! Here We Go Again is a sad film about trying to honour the people and things you miss most without sacrificing your life to mourning that loss. Audiences shouldn’t worry that the film is a downer, however, it’s still a riotous party that has no concerns about real life economic or political stresses (thus, the film is complete escapism) — but there’s an emotional complexity here that exceeds the original — an admittance that even the glitziest parties have to come to an end at some point. Particularly resonant is “My Love, My Life” performed by Meryl Streep, in what is a subtle and grounded performance — a calm oasis in a movie characterised by its sheer commitment to “more-is-more”.

Splitting the movie between two timelines could have made it feel feel cluttered, but instead it papers over some of the more glaring plot problems, allowing the film to be both a travelogue and a more straightforward old-fashioned weepie. Lily James is charming and committed as a young Donna, not so much imitating Meryl Streep as capturing the exuberance that Streep brought to the character the first time around. It’s a studied performance, but not a mannered one. Donna’s youth dotting around Europe works, partly because the cities are so beautifully framed and partly because it’s a genuinely up-beat jaunt. Those longing to see something beautiful will not be disappointed; Paris looks lovely and the images of Greece are gorgeous enough to make anyone want to quit their job to dance on a Greek beach. 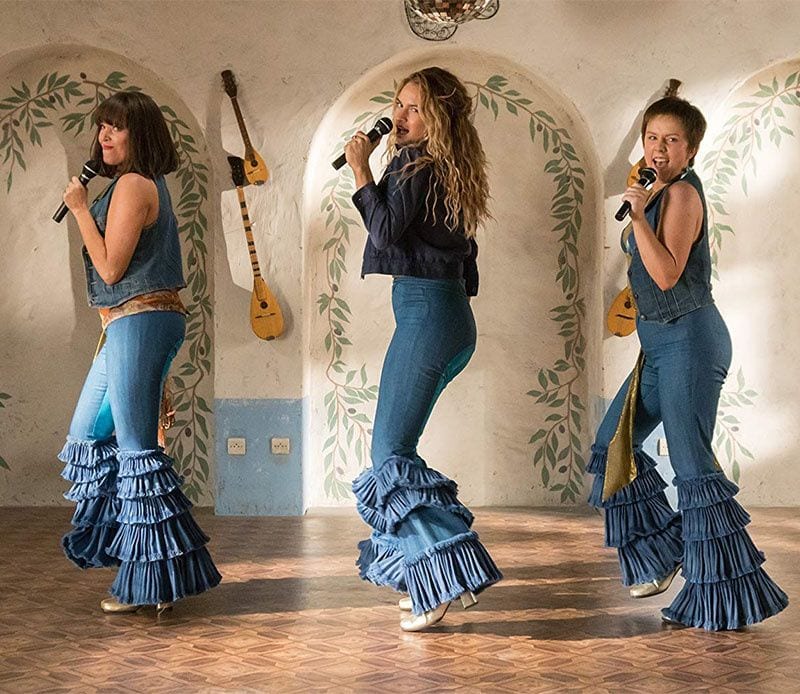 It has the same feel as Ryan Murphy’s 2010 film, Eat, Pray, Love; but its closest thing to praying is loudly, unabashedly singing your inner emotional monologue. (So perhaps it’s more Eat, Pray, Sing Your Heart Out.) That’s what audiences will respond to: Mamma Mia! Here We Go Again’s slavish belief that all emotions, and all lives that contain them, are stories worth telling. If the unexamined life isn’t worth living then neither is, Mamma Mia! Here We Go Again argues, the unsung one.

The rest of the cast is uniformly game. Julie Walters and Christine Baranski are, once again, having the time of their lives, harnessing enough comic energy and pizzazz to pull off the film’s most embarrassing slapstick. Walters is given a surprisingly nuanced emotional beat to play and she does so with typic shading and wit. Amanda Seyfried, called to do something very different than in the first film, puts in a confident, smartly vulnerable performance; as the audience surrogate Seyfried is all projection, providing an emotional anchor to a film that can’t always settle on what emotions it’s most interested in examining.

Happily, Pierce Brosnan sings less this go around (as do all the male cast of the first movie) so he can settle into his wheelhouse, providing a streak of gravitas to a nice but underdeveloped role. Audiences hungry to see Cher may be disappointed by how short her screen-time is, but there’s no denying that she lands (literally — she arrives by helicopter) into the picture as if she were royalty. For a brief second the film feels as if it shudders in her presence, not quite knowing what to do with itself (at my screening people clapped). 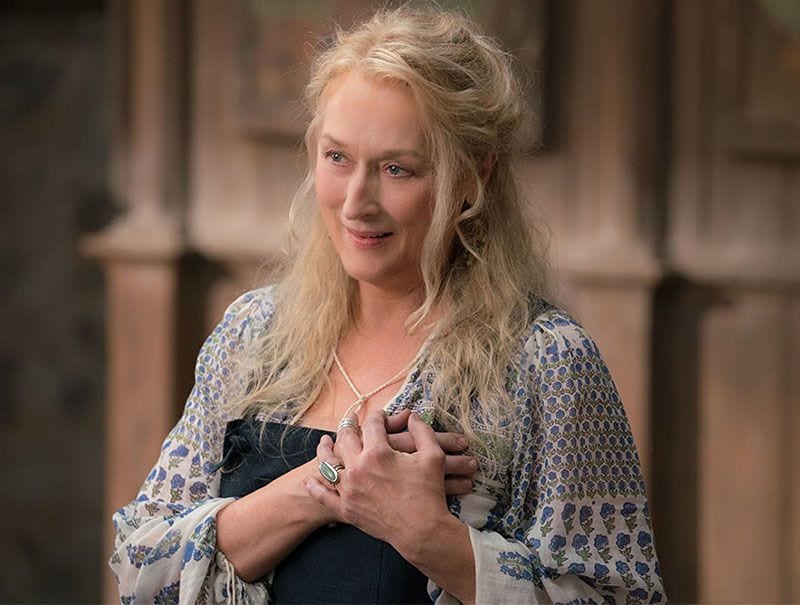 All-in-all, Mamma Mia! Here We Go Again delivers exactly what it promises — perhaps more so than it needs to. Those unconvinced by the pleasure of the original Mamma Mia! will find just as much to scoff at here; the rubric hasn’t been changed, even if this time around the story is a little sadder. But If you’re interested in something that has been constructed with the sole purpose of providing pleasure, there is much worse out there. Mamma Mia! Here We Go Again works hard to make you smile and then it works harder to make you cry; it’s pure Richard Curtis (who steps in as screenwriter here) manipulation, but for those who don’t mind having their strings pulled, the machanitions are fairly successful. It’s a champagne fizz of a movie, a love letter to personal bravery, and a camp party. You may find yourself singing its songs for days afterward.