It was Monday, all right. Berlin’s Tempodrom, a glorious, spikily corrugated concrete wonder rebuilt in 2001 to honor the original venue’s purpose – circus (tent) – was swarming with people hours before the band was due onstage. All 3,500 tickets for the show sold out, with people in attendance ranging from teenagers to pensioners. Such a sight is truly rare in today’s music, for a band to be able to engage cross-generationally. However, as we know all too well, New Order are not like most bands.

After what seemed like a lifelong spat with former bassist Peter Hook, and a final settlement between the remaining members and himself in 2017, New Order have come into their own without him. What a 40-year-old band founded out of tragic happenstance would offer to mass audiences, let alone after all this time, is a question that still circulates among fans and casual listeners. It is a legitimate question when it comes to kong-standing groups, and it’s all the better to see those same bands defy expectations, whatever the outcome.

New Order haven’t released a full-length album in four years. Their most recent release is a live recording of their July 2017 show in Manchester, bearing a most mind-boggling name, Σ (No, 12k, Lg, 17Mif) New Order + Liam Gillick: So it goes …. With a lack of new material to play, the career-spanning 16-tune set comes across as something purposefully designed to appease virtually all of their eclectic fandom. Those fans range from glutted youngsters seeking to prove their cultural superiority to peers only into more modern electronica to Joy Division fans. It’s hardly a surprise that monochromatic Joy Division merchandise adorned countless attendees. 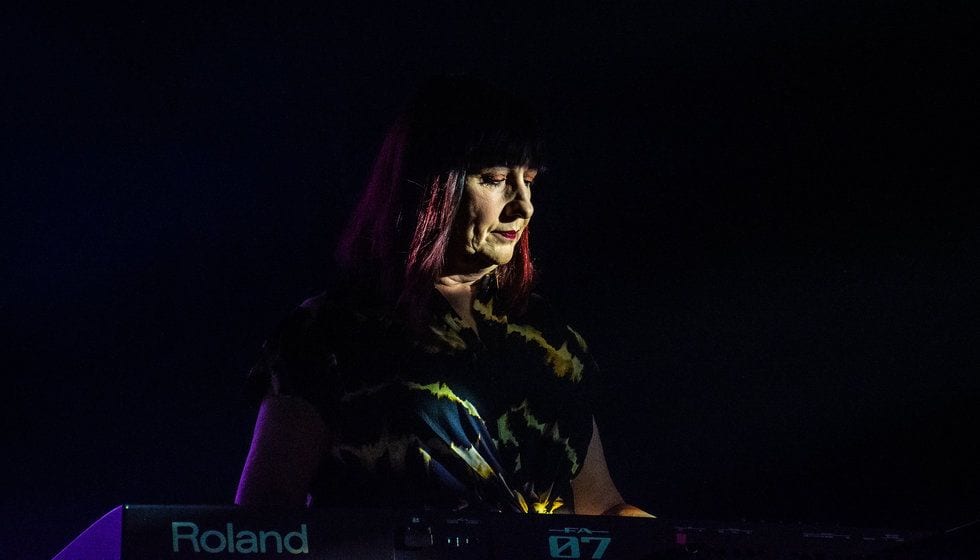 Now that Hook, the feral heart of the band, is history, it is up to the frontman Bernard Sumner to entertain the crowds. It is no news that the 63-year-old musician is a catastrophically poor singer and as far removed from a showman or “the voice of a generation” (cue the late Ian Curtis) as one can be. But New Order deftly compensate for his lack of showmanship with astounding background visuals. They range from barely edited historical documentary footage of pre-unification Berlin, to slow motion of pool diving or flying colorful cones animated WordArt 98 style.

Another component of successful compensation is the music itself. Visceral and innovative, it is an undeniable instant reminder of why this band endured what few others have, and still came out on top, alive and well after four decades. The show, exquisitely appropriately for Berlin, commences with “Vorspiel” (Prelude) from Richard Wagner’s Das Rheingold, the first of the four The Ring of the Nibelung operas. As the lush melody, sustained on a low E, builds one layer on top of another, illustrating the motion of the mighty river Rhine, slow-motion footage of divers’ acrobatics, edited to supersaturation, take over the scene. It is a peculiar, yet opulent start to an otherwise solid, but somewhat patchy, show.

As Wagner subsidies, staccato imagery from the documentary B-Movie: Lust & Sound in West Berlin 1979-1989, takes over. It’s the video for the opening song from the concert, and the band launches into a somewhat peculiar combination of their latter-day assailing electronica and Joy Division tunes. “Singularity” and “Restless” are two of the more prominent songs from their most recent release, Music Complete (2015). With fast analog beats, sly and cynical, “Singularity” is as good of a song as New Order have ever produced. While despondently reciting “for all lost souls who can’t come home, for friends not here, we shed our tears” over hectic, shellshocked beats, Sumner instantly illustrates the very essence of his quintet. New Order’s longevity comes not only from their consistently fine electropop and post-punk amalgamation. It comes from their sardonic pathos, their vision of club kids who go out not to seek casual entertainment, but to relieve their frustrations and let out anxiety out. 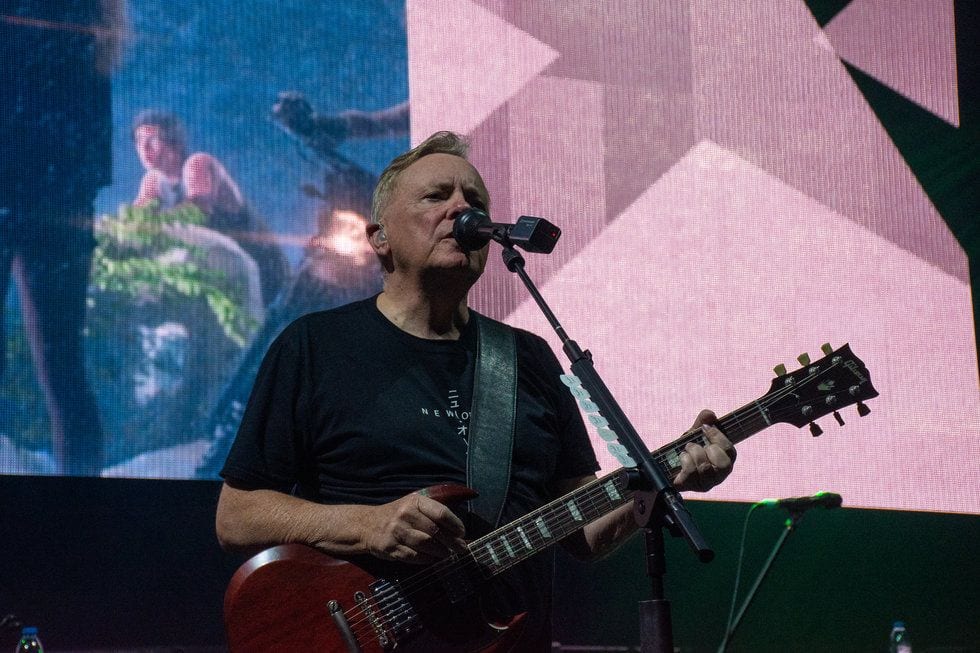 After “Regret”, the all but mandatory “Joy Division segment” ensues, with “She’s Lost Control” and “Transmission” sending the otherwise calm crowd into a frenzy. As much as Sumner believes he owes to the late Ian Curtis, and as much as some of the crowd look like they only showed up for the Joy Division songs, these tunes genuinely sound sorrowfully out of place here. It’s comical to have to say it after all this time, but New Order is not Joy Division. Save for some bass and guitar sound aesthetic, it’s a wildly different band. Sumner is no Curtis, either. While predominantly legendary, Joy Division songs do not mesh well with the New Order material, and Sumner doesn’t know how to sing them anyhow. The masses are, indeed, happy to hear these songs, but we would have been better off with “Crystal”, “60 Miles an Hour”, or any other Get Ready songs, of which none were played.

That was perhaps the main complaint about the show – a subpar setlist. At 16 songs, the show was barely 90 minutes long. However, whereas four of the songs were Joy Division, of the mere 12 songs from New Order’s decades of history, none were from most of their glorified releases. “Age of Consent”, “Thieves Like Us”, and “The Perfect Kiss” are sorely missed and would have worked much better than the Joy Division segments. Otherwise, given the global political climate, it would have been tremendous for the band to have revived some of their most menacing pop songs from the 1980s, such as “State of the Nation”, but alas, this never happened.

Expectedly, “True Faith” and especially “Blue Monday” get all the phones out for recording and, for the first time, screams resonate with the lights playfully capering across the towering, corrugated walls. It seems as though the show never really took off, but it was already time for the encore and, again, two Joy Divison songs. “Decades” is brilliant, hysterical, and soul-crushing in its expansive chords. Meanwhile, “Love Will Tear Us Apart” is what it is, and it seems as though everybody showed up just to hear that.

All in all, it was a solid, albeit too brief and perhaps not masterfully put together, show. Whereas Sumner’s singing and lack of showmanship fall flat (we may miss Hook forever, no point in denying it), the music made complete with their videos’ social commentary is still sharp, emotionally brisk, and inspirational. Once pioneers and today agile adaptors to current electronic and pop music trends, Madchester’s finest are yet to disappoint in terms of their output and relevance. Their crowd may not be the 24-hour party people anymore. But the new generations who shyly mix with the older fans are looking to relive the exact same sentiments of manic dejection in the discotheque. As ringleaders of their scene, New Order are a timeless and historically relevant band. But as deadpan translators of youthful angst and growing pains concealed in the crowds, they are as timely as your next door neighbor’s daughter who comes home from a club at 4:00 am with her makeup smeared from crying, not sweat.