It’s a balmy Friday night in the Bay Area here on May 11 and Uptown Oakland is buzzing with anticipation because Chris Robinson and his new side project As the Crow Flies are rolling into the Fox Theater. This show opens the final weekend of a month-long national tour where the former Black Crowes singer is touring behind the song catalog of the Black Crowes for the first time since the band’s breakup five years ago. Following two previous hiatuses, it seems the Crowes are grounded for good this time. But the music still lives on in the memory of all who were drawn to its sonic call, which was many a rock ‘n’ roller from 1989 to 2013.

Robinson perhaps foreshadowed this tour last summer when he slipped a few Crowes tunes into his solo acoustic repertoire, whetting the appetite of long time fans. As the Crow Flies now flips the script as a side project to the Chris Robinson Brotherhood (CRB), which launched in 2011. The CRB has been going strong ever since with Robinson pulling off the rare feat of putting together a second band that’s arguably just as good as the one that made him a rock ‘n’ roll star in the early ’90s. The Black Crowes helped launch a jamrock movement that scarcely existed when they first hit the scene, and has since grown exponentially over the past two decades to open a door for the CRB to chart a similar trajectory with a little more creative freedom since fans aren’t clamoring for the hits.

As to why 2018 is the time to revisit the music of the Black Crowes, it’s probably not a coincidence that brother Rich Robinson put together his own Crowesy reboot in 2017 with The Magpie Salute featuring former Crowes lead guitarist Marc Ford as well. Now Chris counters with a lineup that features young phenom guitarist Marcus King and three former Crowes in bassist Andy Hess, guitarist Audley Freed and keyboardist Adam MacDougall along with drummer Tony Leone (the latter two being current members of the CRB). Chris has cited a rare three-month break in the CRB’s schedule as an opportunity to revisit these songs, so why not?

“The songs that you write, to me, that’s the real jewel of the thing. That’s the thing that’s going to be here way after you’re gone. If the songs resonate, then it says something about them. I think that’s how I got into this world. This is what I dreamed about. If you can weave your dream into the reality of your life … And these songs are the magic engines that run that dream. That’s important to me,” Robinson explained to Rolling Stone magazine earlier this year.

The bottom line for the Black Crowes was that the Robinson Brothers just weren’t getting along, with hints of the classic “creative differences” probably being the ultimate culprit in the band’s demise. It’s hard to create harmonious rock ‘n’ roll music from the heart if the band members aren’t on the same spiritual/philosophical page, hence it’s tough to fault anyone for going their own way if that’s what they needed to do to find peace and harmony within. But tonight, the music of the Black Crowes will soar once more and fans are stoked. 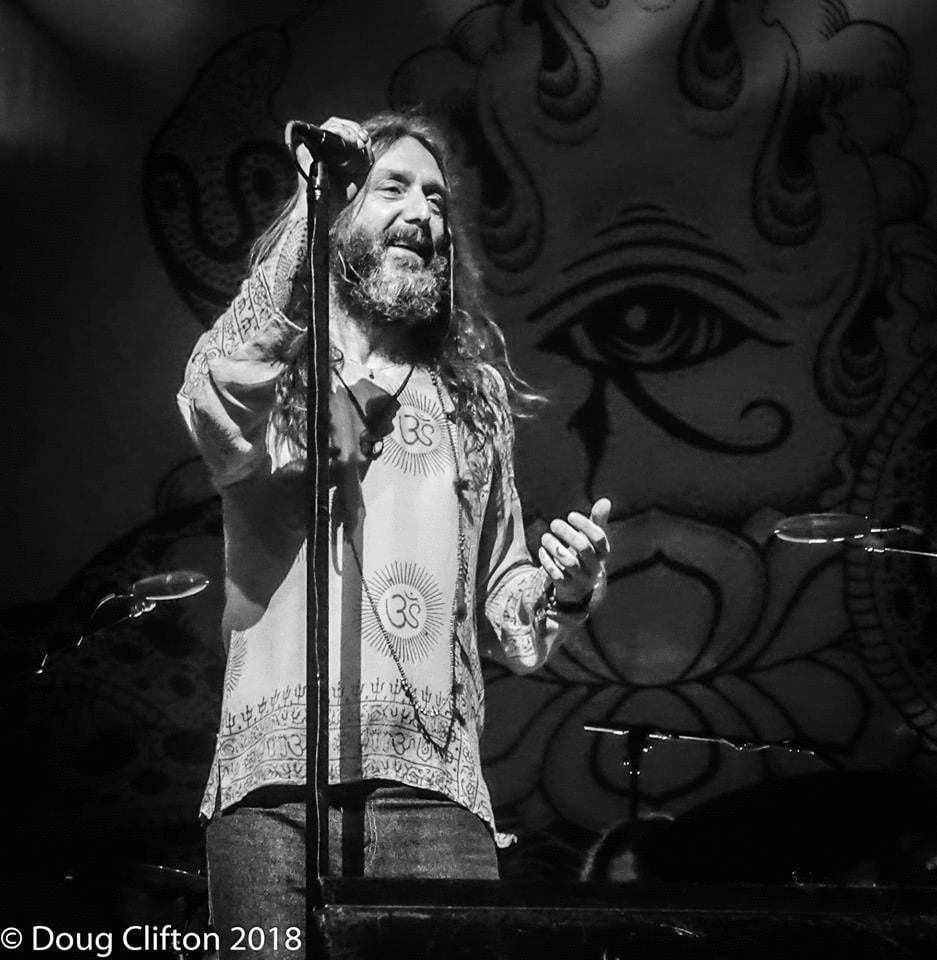 The band comes out blazing on high energy fan favorites “Remedy”, “Sting Me” and “Twice as Hard”, with Robinson clearly in high spirits. The latter tune conjures a particularly vivid nostalgia for some Gen-Xers, being that it’s the first track from the Black Crowes’ first album back in an era where albums meant something more and were listened to repeatedly since there was no such thing as internet radio or streaming services. The 21st century has become a golden age of sound as far as access to music goes, yet there’s also been something lost with the role that albums used to play in establishing a band.

With most of tonight’s songs coming from the band’s first three albums that were released between 1990 and 1994, there’s a Gen-X revival in the air that conjures that rebellious feeling when the Black Crowes were kicking ass and taking names as rock ‘n’ roll upstarts with a deep background in the blues. The melancholy catharsis of “Seeing Things” dips into this bluesy well before “High Head Blues” cranks things back up with Robinson’s penchant for mixing the blues with a groovier melodic rock flavor. The band is having a great time here and it’s downright contagious.

The somber “Good Friday” finds Robinson back in blues preacher mode with a chance to blow some harmonica as well. The song builds into a strong jam with some great shredding from King for a big crowd-pleasing peak, with the tune then finding its way into a hot cover of CSNY’s counterculture classic “Almost Cut My Hair”. When Robinson sings, “But I didn’t and I wonder why, I feel like letting my freak flag fly,” you know he means it. The jam is another platform for more great lead guitar riffage from King and Freed as it become clear the duo have developed some genuine chemistry on the tour. The 21-year-old King looks like he could be a teenager plucked from Middle Earth, but his playing demonstrates the seasoned maturity of an old soul.

This kind of deep blues jamming that takes the audience on a transformative sonic journey is what the Black Crowes live show was all about, so it’s a strategic selection when the band follows this sequence with the Crowes’ “Wiser Time”. The classic road song from the 1994 Amorica album has a timeless quality that few other songs from the era can match, with Robinson singing of the band being able to part the seas on a good day while finding such feats to be glory beyond reach on a bad day. It’s this sense of searching for the sound that will transport everyone present to a higher plane that has separated the Black Crowes, the CRB and their jamrock brethren from all the bands that just play the same show every night.

MacDougall dials up a great organ solo here with a wizardly tone science that makes it easy to see why Robinson has kept him close by his side for 10 years now. King and Freed both crank up the blues rock power as the band takes the jam for a ride that is indeed glorious, as King steps up with some melty wah-wah shredding to create a big sonic wave that receives strong feedback from the audience. Freed then takes the baton and leads the band to catch another rocking sonic wave as he too delivers hot bluesy riffage to keep the jam grooving on. 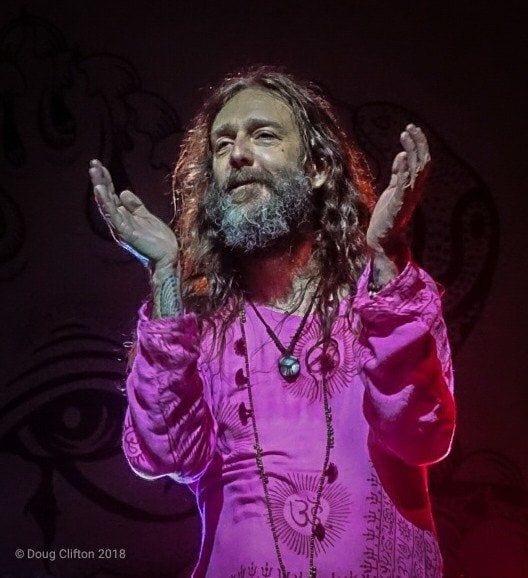 The obligatory “She Talks to Angels” provides a breather before the band digs back into the jams with the seminal “Thorn in My Pride” from 1992’s The Southern Musical & Harmony Companion. This was the song that really enabled the Black Crowes to establish themselves as an improvisational force, taking a six minute track and stretching it out much further in the live setting. The song also hinted at Chris Robinson’s Deadhead background with the lyrics imploring a lover to let her love light shine. As the Crow Flies lets the jam shine here as the guitarists cut loose over the infectious groove to the delight of all. Then Robinson follows with some high-energy harmonica work that always seems to conjure the spirit of the Dead’s legendary Ron “Pigpen” McKernan, as there just aren’t many blues rockers who still carry the torch for the art form. This in turn gives way to still more smoking jammage before the song’s triumphant piano breakdown/outro.

The band then tears through “Jealous Again” and “Hard to Handle” to cap the rousing set, including a seamless segue from the latter into Deep Purple’s “Hush” as the Black Crowes were fond of doing in 2013. Robinson has proven himself one of the classic rock genre’s most devoted curators over the years, delivering an eclectic array of covers from his wide range of influences and nailing the vibe every time as he does again here. MacDougall gives the jam a big boost with an epic Jon Lord organ solo to power a climactic jam that closes out the set as it drops back into a last chorus of “Hard to Handle”. The encore features more of these influences with smashing takes on the Doors’ “Peace Frog” and Rick Derringer’s “Rock and Roll Hoochie Koo”.

It’s been an uplifting night of feel good rock ‘n roll music and cathartic blues, leaving the audience elated as they exit to Telegraph Avenue’s enticing strip of craft brew pubs and cocktail bars. Marcus King has been a revelation for those who were unfamiliar with the young gun, showing why guitar great Warren Haynes has compared him with Derek Trucks and produced his second album. Robinson meanwhile has given the fans what they’ve been craving with a dynamic blast from the past that sets the stage for another big year from the CRB.

“When the world is full of chaos and doom and fear, people like us want to get down and do our work. Our work is positive work. It’s not going to fucking change the world or anything, but it can get you through the night,” Robinson told Rolling Stone. This concept of putting out positive vibrations to help transform dark into at least some momentary lightness has been a hallmark of Robinson’s career and has certainly been achieved again here tonight. 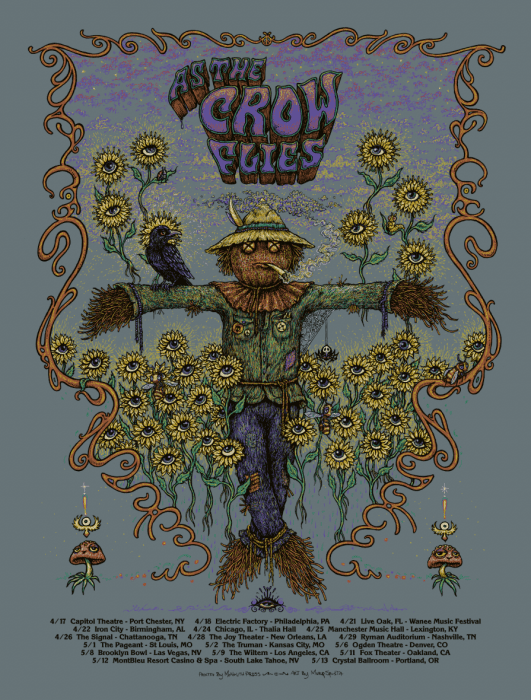