In the first few pages of The Exhibition of Persephone Q, the titular character, Percy, admits that she’s just tried to kill her husband. Admittedly, her attempt is futile. She pinches his nose shut, but he doesn’t wake or gasp for air. In fact, Percy doesn’t actually want her husband dead – she loves him, she really does – and she struggles to understand the sudden violent impulse. It’s as if she no longer recognizes the man she married. Or, perhaps more accurately, she no longer recognizes herself.

Percy lives in a studio in uptown Manhattan with her husband, Misha, a Bulgarian immigrant with a mathematics Ph.D. Percy works odd jobs writing marketing copy, but mostly she proofreads for a successful self-help author who lives downstairs. It’s late 2001, in the months directly following 9/11, and while gazing downtown Percy notes the “great gap tooth against the gullet of the sky.”

This is Jessi Jezewska Stevens‘ first novel, and she’s at her best when she’s able to render pristine images like the one above. (In all the writing about the fall of the towers, it’s impressive to find a turn of phrase not yet done to death.) Later, while talking to an older man, Percy notices that “his face opened, like a fresh egg cracked onto a plate.” Percy is inquisitive and haunted, with the aimless habits of an insomniac. She wanders the streets at night, hanging out at cafes or going to jazz clubs.

These impulses make Percy the ideal narrator for a short, meandering book like Persephone Q; one waits for her to run into someone special or happen upon an epiphany that snaps her out of this benumbed state. But when such a revelation comes, Percy hardly changes at all. She doesn’t learn to communicate with her husband or with her friends, who seem to regard her much like they would a wounded deer. She doesn’t consider a small vacation or anything that might help her to break free of her strange tendencies. She only considers herself.

Percy’s solipsism is undoubtedly one of Stevens’ main preoccupations, but it’s also the book’s biggest weakness. “What does it mean to know oneself?” she seems to be asking, but by the end of the book, it isn’t towards Percy that we feel a scarcity of knowledge. Persephone Q is in many ways a character study of a woman who refuses to settle, much less coalesce into a compelling character. “I never love where I am, I would always rather be somewhere else,” Percy says. It’s much to the novel’s detriment that we’d often rather be somewhere else, too, and with someone else.

Percy’s big revelation arrives at her doorstep in the form of a catalog, and she initially regards it as yet another thing to keep from her husband. (On top of everything, Percy is pregnant, and she hasn’t told Misha.) The catalog is for a photography exhibition, and the photos feature a pale young woman sleeping in bed while the Manhattan skyline gradually changes behind her. The woman is obscured just so, but Percy is certain that the woman is her. And she has good reason to think so: the artist is a man she almost married.

Many of the novel’s fixations are found here, in the catalog’s bloviated artspeak:

“In these photographs, the disappearance of major landmarks, including the Chrysler and Empire State buildings, and, most notably, the towers, challenges received ideas about America’s most recognizable skyline. The juxtaposition of these manipulated scenes suggests that any one of these variations might be the ‘original.’ The viewer wonders: Which is ‘authentic’? Which is ‘correct’?”

Naturally, Percy wonders the same about herself. The show sounds just bland enough for wide acclaim, which of course it receives. “Since when was polemic the purpose of an ode?” a character protests later in the book. Stevens seems to take this sentiment to heart: Percy, for all her quirks and navel-gazing, is ultimately a dull and impassive character. Only she finds herself interesting, or at least wants to.

Percy’s self-interest is also a formal obstacle, hindering the development of Stevens’ secondary characters. The self-help author Percy works for is a commanding woman who pressures her neighbors into attending her poetry readings. Percy’s best friend, Yvette, and her former coworker, Constance, are essentially the same person with different jobs, their competence highlighting Percy’s aimlessness by contrast. A cartoonist named Harold goes missing and his wife refuses to accept his abandonment.

As a whole, the characters are intriguing in theory but ultimately underwritten. They shine emptily, like the trinkets Misha finds at Rockaway Beach. And even Misha, a brilliant weirdo, is dulled by Percy’s limited perspective.

Percy’s friends and acquaintances, it seems, are not worthy of an exhibition themselves. Fair enough. But they deserve better than their deployment as chess pieces in her road to rediscovery. When Percy tells them about the exhibition, they’re understandably skeptical. This woman could be anyone, they seem to think. But Percy is insistent, and she attends the show in person, pleading with the attendees to recognize the truth. They too couldn’t care less.

So why should we? It’s not until the book’s second half that Stevens gives Percy a backstory. Growing up just north of the city, Percy is a hapless child with emotionally absent parents. Her mother vacuums around her sprawling figure and reads mystery novels. Her mother disappears into the city at night to live the life she never got to upstate. Eventually her mother leaves for good, without a word, and Percy spends the rest of her childhood alone with her father, who builds a second house in the backyard so that he can escape too.

Certainly Percy’s backstory says a lot about her habits and tendencies, but still it doesn’t say a whole lot about her as a person. She is, after all, much like the woman in the photo: lifeless and nondescript. Eventually, when all else fails, she confronts her ex-fiancé about whether or not she’s the woman in the photo. He, too, is unmoved, and seems to have mostly forgotten his past life with her entirely. The book’s denouement doesn’t pay off, but Percy decides to believe in what she set out to prove all along anyway. Namely, that she is a work of art.

Persephone Q is a little bundle of curiosities with limited appeal. Stevens’ prose style is promising – this is clearly the work of a talented writer – and yet much of the writing is stunted by an odd, dreamy formality that reeks of an MFA workshop. It’s not Percy’s flatness that fails the book, but her lack of perspective. 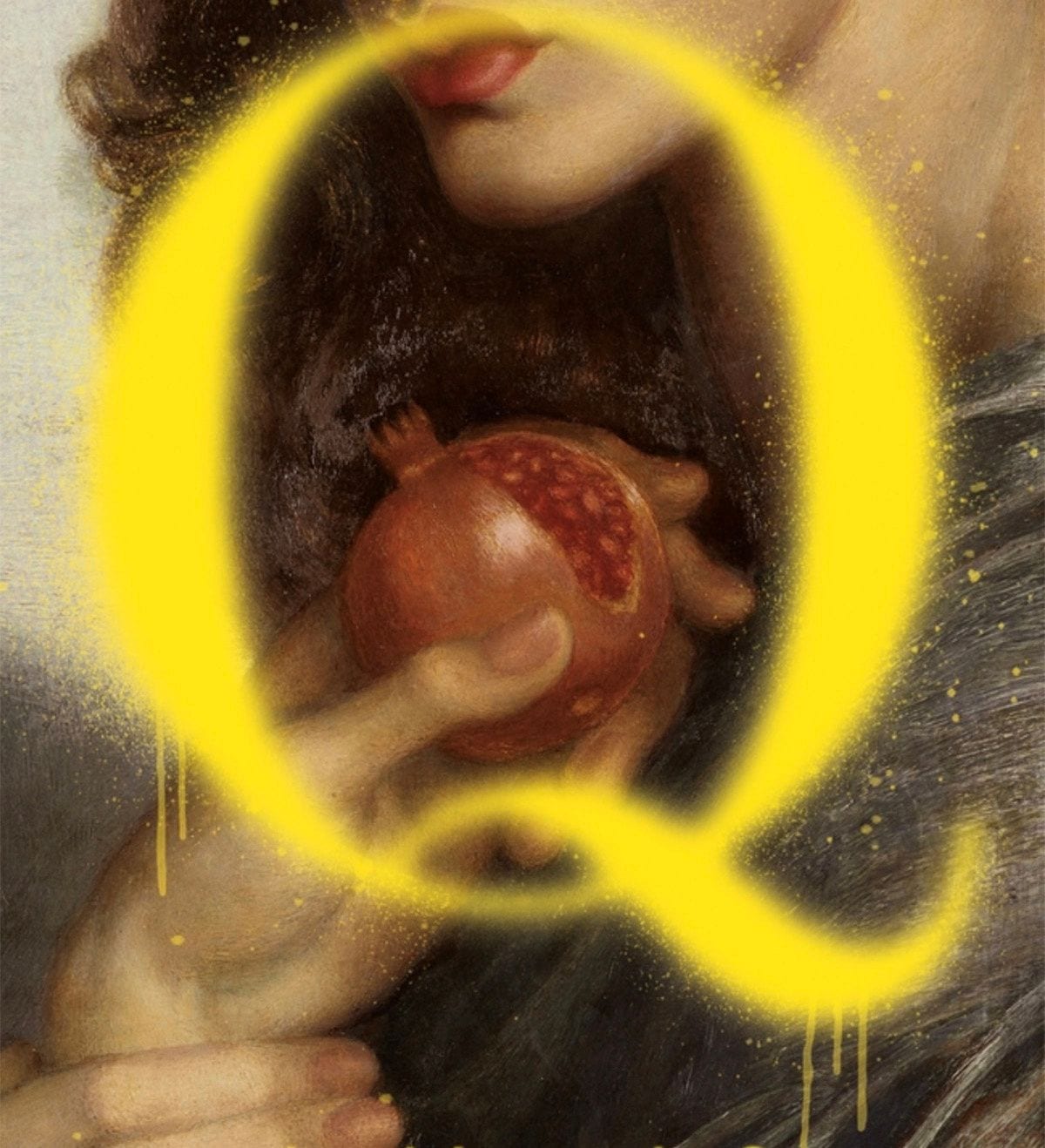 Recent novels like Ottessa Moshfegh’s My Year of Rest and Relaxation and Sally Rooney’s Conversations with Friends and Normal People have succeeded where Persephone Q fails in conveying a compelling flatness. Moshfegh’s narrator welcomes passivity into her life with an assortment of sleeping pills, and her insane desire to hibernate for an entire year works effectively as a satire on the hopelessness of contemporary life.( Rest and Relaxation also takes place right after 9/11.) Rooney’s novels are formally flat, but their psychologically density gives them real weight. Her characters are often very passive, but their constant tussling with the labyrinthine power structures of sex and love hits home.

Passivity does not necessarily make for an uninteresting novel. What could be more relatable to contemporary readers than characters who crumble under the pressures of the powers that be? Polemic is not the purpose of an ode; novels speak to modern ills but are under no requirement to valiantly fight against them within the confines of a few hundred pages. There’s certainly a compelling case to be made for the depressives of the world – for those whom things happen to rather than those who cause things to happen.

But Percy is not just a passive narrator. She’s an uncompelling one, and in turn much of Persephone Q is a dull novel. It’s savvy of Stevens to couch her preoccupations with identity and authenticity into this rich conceptual playground, but it remains unclear what she or Percy are trying to prove.

The novel’s epigram, from 19th century author Maria Edgeworth, provides some potential insight: “Candid pupil, you will readily accede to my first and fundamental axiom—that a lady can do no wrong.”

This a funny quote, deployed as a cheeky bit of self-justification, but it’s misapplied here. Persephone Q isn’t an effective satire, and Percy isn’t self-aware enough to consider whether her actions are right or wrong. She just is. Is that art?