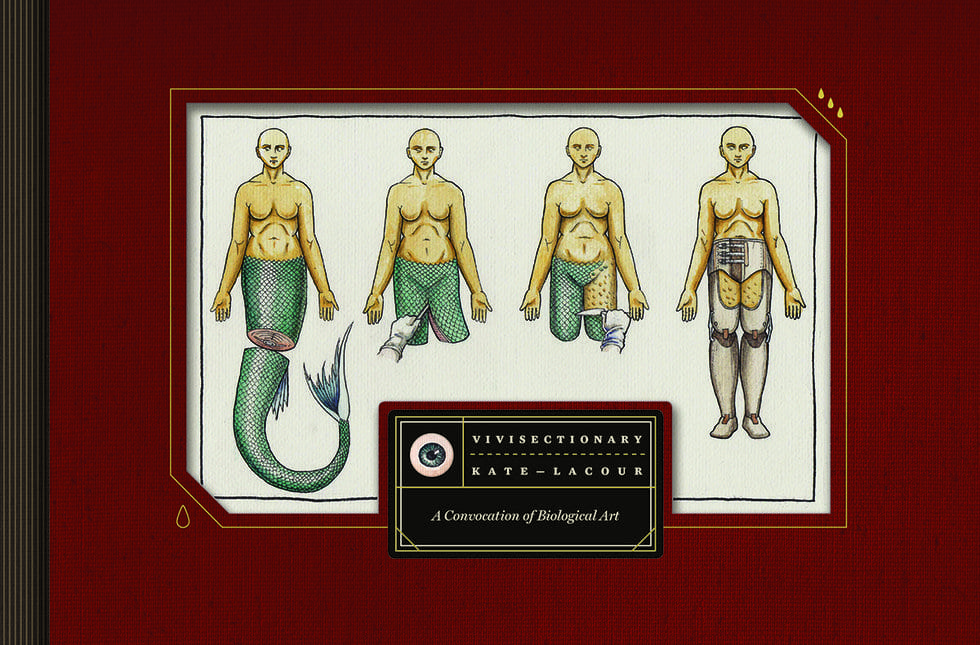 The best way I can describe Kate Lacour‘s graphic novel, Vivisectionary, is to convey the expression on my partner’s face as she flipped through it: her mouth was locked in a grimace, her eyebrows arched at each page.

Vivisectionary is horrible—and that’s a compliment. I could say it’s horrifying, but that implies horror in the genre sense (though technically it’s that too). Lacour’s art burrows past standard tropes to trigger a range of down-to-the-bone visceral reactions. It’s unpleasant viewing—the way a roller coaster would be an unpleasant form of public transit. It’s good in small doses. Lacour’s vividly imagined 136 pages just enough. My wife blinked at every one of them.

Like “horror”, “graphic novel” might be the wrong word to describe this work — unless it’s possible to have a novel without such things as characters, plot, and settings. The back cover calls Vivisectionary a “compendium”, and the front cover a “convocation”. It is most certainly “biological art”, and the images of “experiments” — and experiments themselves.

Lacour explains in the afterward that her inspiration came from the natural museum dioramas that fascinated her as a child. She was fascinated with the grotesquries of taxidermied animals on display, as well as the story fragments captured in three-dimensional freeze frames. She says they filled her with wonder. Her art fills me with something a lot more disturbing. 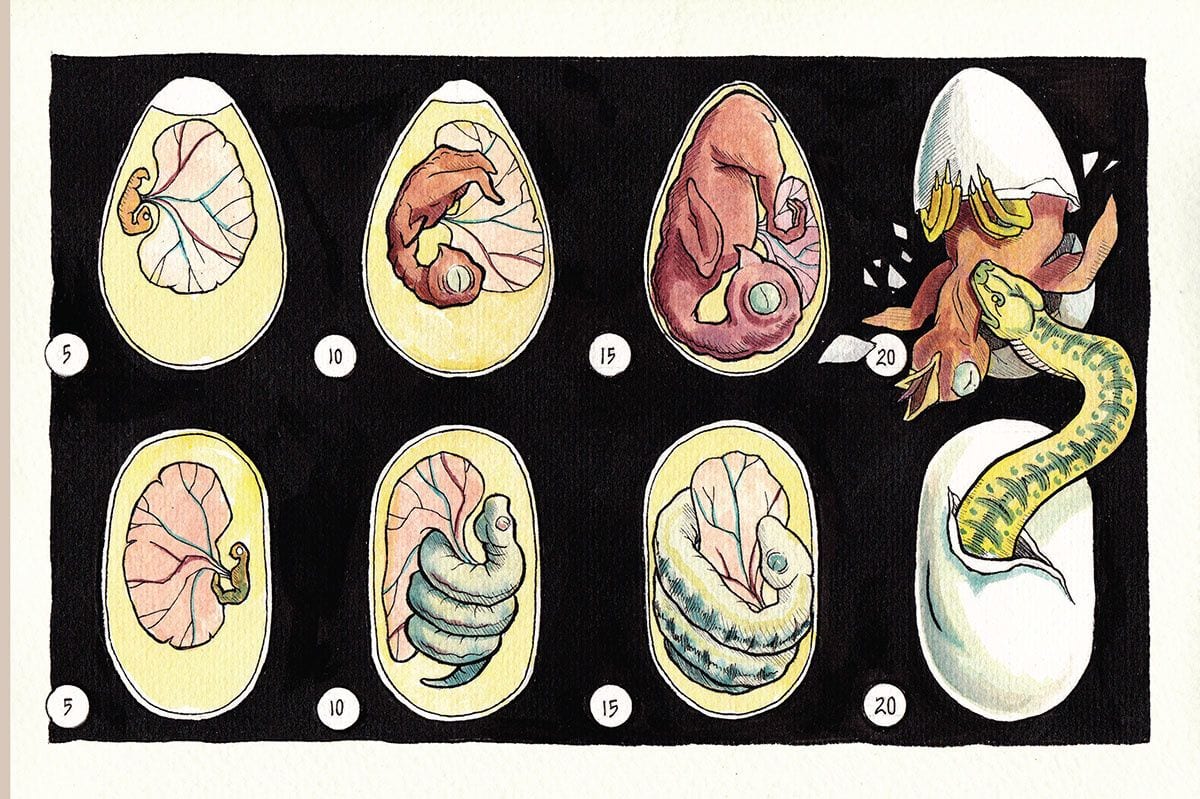 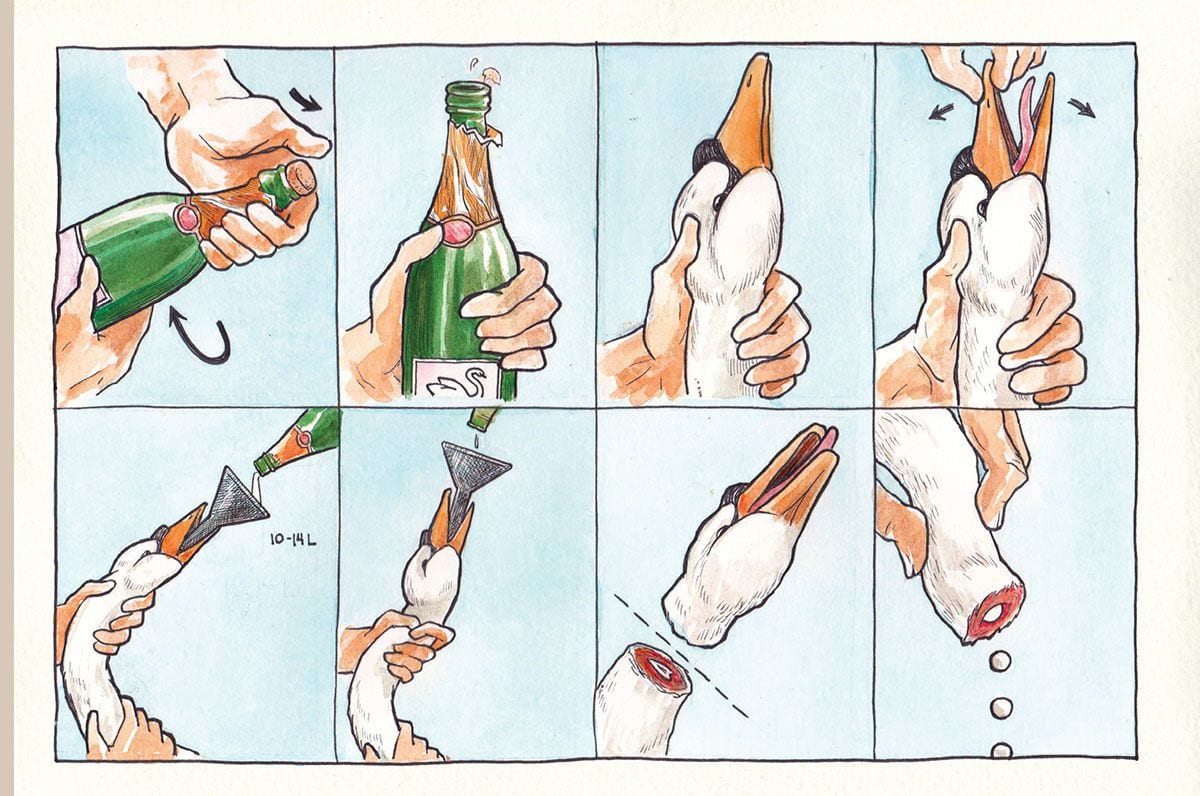 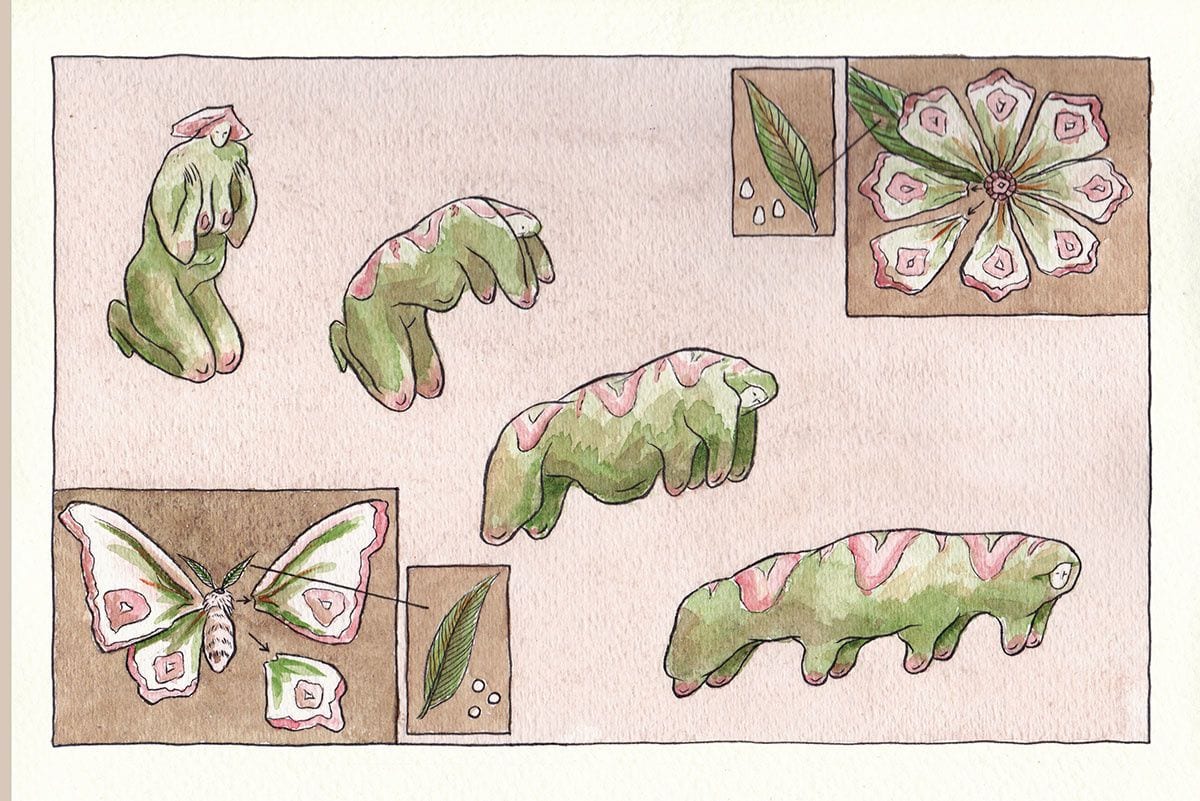 Imagine you just pulled a textbook from your medical school library shelf. It’s leather-bound, with one of those official-looking marble patterns on the inside covers. But this medical textbook is… different. Its sixty two-page spreads feature individual “plates”; the image on the right, the number and title on the left, and a decadent swath of greenish beige space in-between. The first image seems normal enough. Two rows show the parallel development of two egg embryos, a bird’s and a snake’s—until they hatch simultaneously and the baby snake kills the baby bird.

While the weirdness of that should be obvious (medical illustrations are supposed to represent general phenomenon, not specific events), Plate No. 2 is significantly weirder. It’s a how-to diagram for twisting off the cork from a champagne bottle. Only wait, the bottle is suddenly a swan’s neck, and now you’re pouring the champagne down a funnel inserted into its mouth. Then, you’re removing its head and extracting a row of white pill-like objects from the perfectly bisected wound. These are instructions for what exactly? And for whom?

It gets worse. A woman grotesquely morphs into a caterpillar—which is somehow related to both a butterfly with petal-like wings and a flower with wing-like petals, depending on how you follow and interpret the flow of panels. (Is there a correct interpretation?) Soon a mouse is cocooning itself into a cocoon-winged bat, a hybrid dog-baby suckles at a woman’s breast (is she wearing Victorian clothes?), and pigs grow into squares and worms into bologna rolls convenient for food preparation. It turns out snakes and swans can be surgically combined—though for less self-apparent reasons. Brains also make great yarn and/or snakes, and mermaids evolve into land lizards. That’s just “Phase I”.

“Phase II” involves people: snake masturbation, penis bongs, food blenders for skeletons, sex with roasting chickens, babies born from ejaculate wounds, brains with vaginas, hummingbirds sucking life from fingers, frogs growing from eyeball placenta, bisected embryo reforming into kissing twins. I didn’t even get to the drug theme, e.g., shooting up ground unicorn horn; snorting sands of time surgically removed from your spine. I will leave you to explore the rest of the art in Phases III-V. There might be a way to read a plot into the mounting discomfort, but if so, the viewer is the main character, and the images are your deranged antagonist. 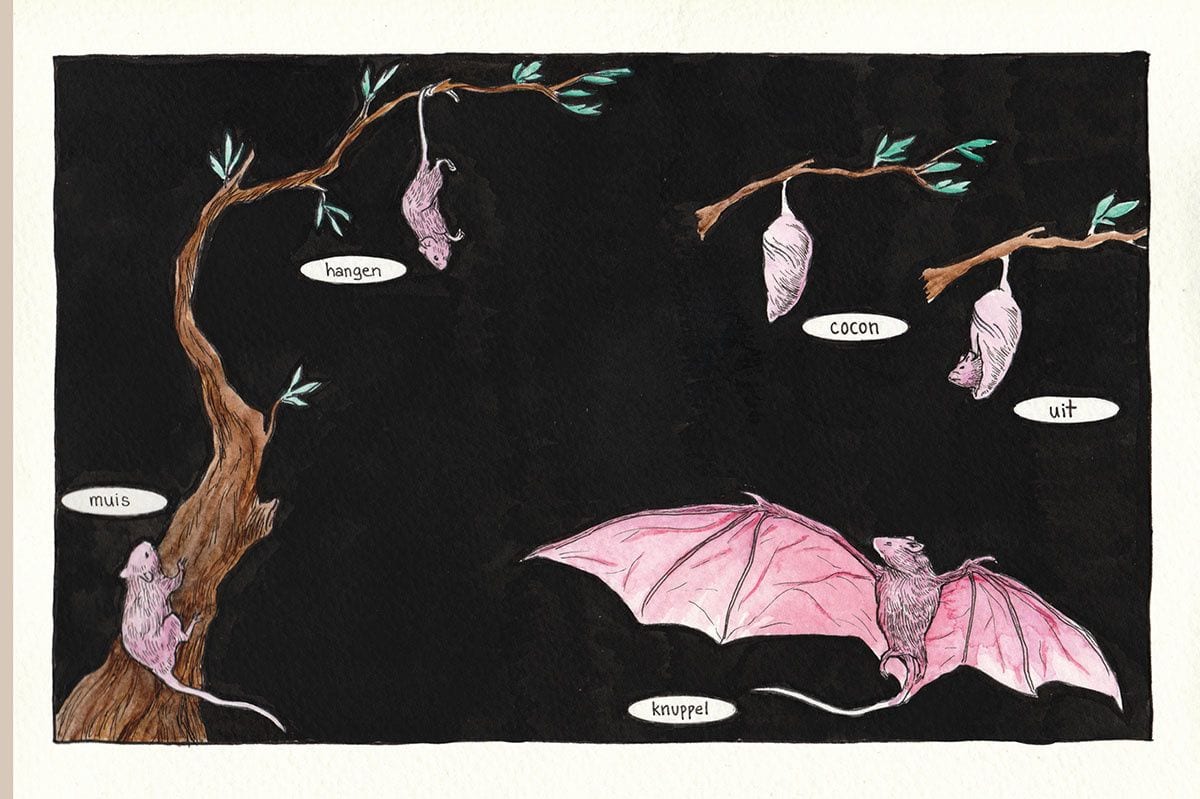 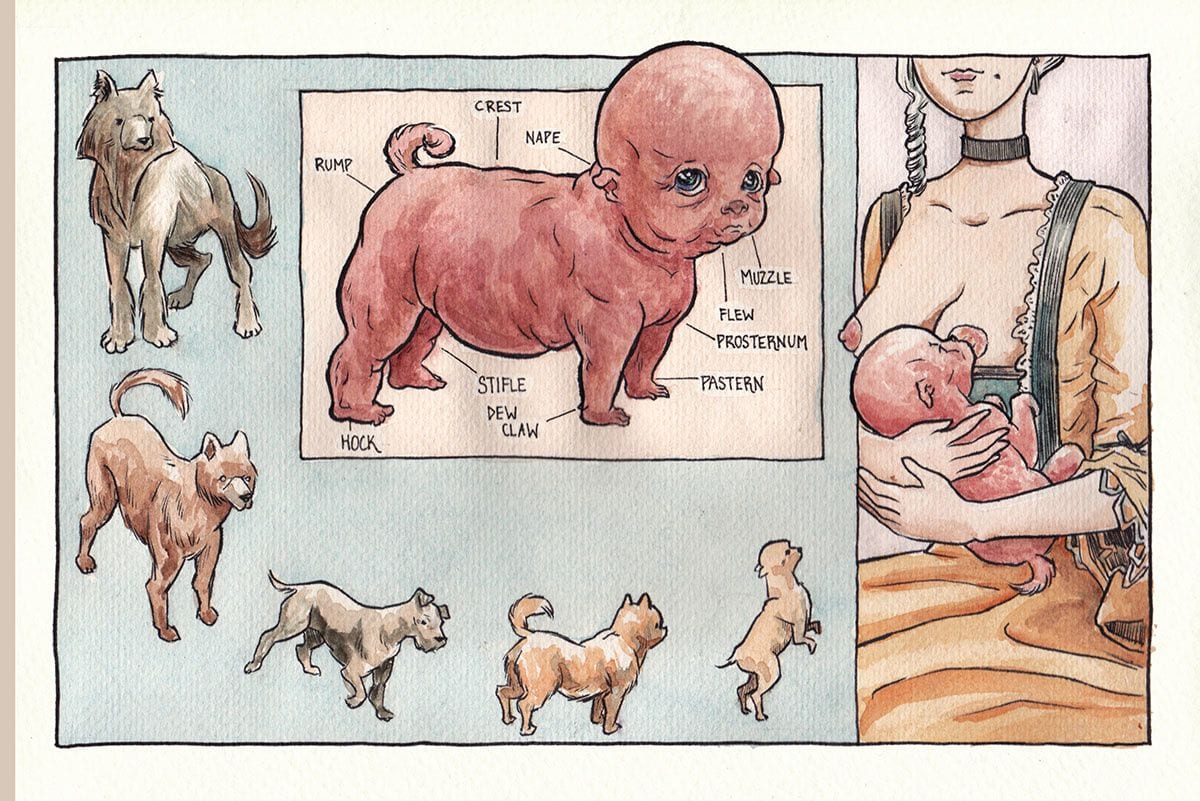 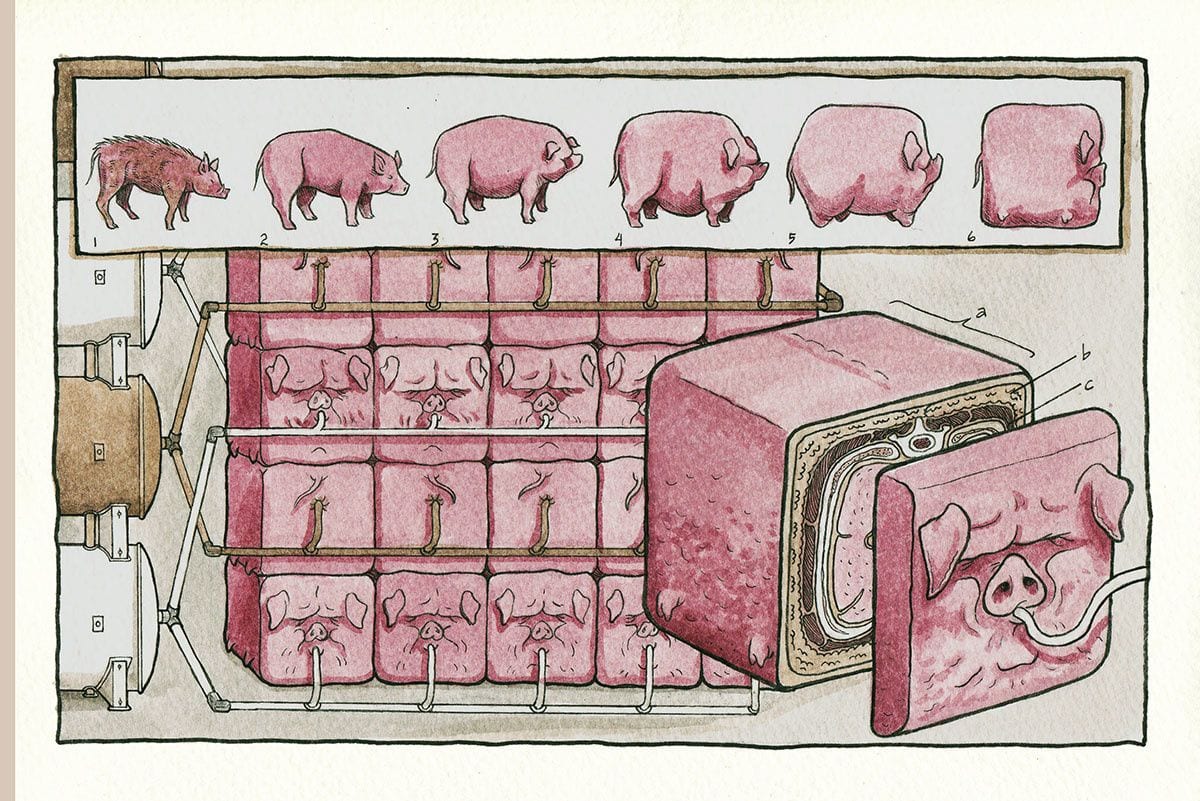 The horror you’ll feel isn’t just from the skin-prickling discomfort the images evoke. It’s the implied but wholly ambiguous circumstances of the their production. Not Lacour’s actual images—she’s fully in charge of those—but who or what is responsible for the surgical operations Lacour documents? Whose undrawn body controls the scalpel?

While the notion of a medical lab staffed by rogue physicians with macabre ethical standards would be sufficiently disturbing, the problem Lacour proposes runs considerably deeper. This isn’t a medical book documenting the gone-terribly-wrong. In Lacour’s universe, this is standard practice. And although the prospect of the entire branching field of medicine conforming to the norms of Vivisectionary is thoroughly disturbing, it’s nature itself that appears to be the most deranged. Here, the medical field is just responding to the inhumane absurdities Lacour’s unnatural world produces. The mad doctor dictating from his operating theater is God.

It’s also uncomfortably possible to interpret Vivisectionary according to its cultural and political moment. Is this a treatise on transphobia? I don’t think so. I doubt someone contemplating reassignment surgery would leave it on their coffee table. Is this a bizarre backdoor entry point for pro-life positions, including the sanctity of stem cells? Again, doubtful. But the volume does communicate visceral distrust of those wielding medical power, and these (often female) subjects that have little control over their own (often headless) bodies.

That merperson on the cover (their gender is strikingly ambiguous), did they opt to have their tail removed and replaced with mechanical legs? Is there such a thing as mermaid conversation therapy in this funhouse mirror of reality? Prepare yourself for Lacour’s depiction of fetuses — their brains and hearts and eyeballs and amputated fingers and forearms will disturb.

But if you’re comfortable with discomfort, and you like your graphic novels to experiment with the DNA of the comics form, then Kate Lacour is your deranged doctor.