In 1960 Montana, 14-year-old Joe (Ed Oxenbould) sits with his classmates in a valley while a local ranger lectures the kids on forest fires, much like the one raging near their community. Joe is the only one taking notes until one classmate stops him. As she informs him, none of this information matters. If the fire were to ever reach their small town, it would be too late for everyone.

This early scene in Paul Dano’s Wildlife becomes the overarching metaphor for the rest of the film as Joe stands in the path of a different type of destructive force, that of his parents’ disintegrating marriage. Like the firefighters struggling to control the blaze, Joe can only manage the mounting tension entering his home, not extinguish it.

Both Joe’s father Jerry (Jake Gyllenhaal) and mother Jeanette (Carey Mulligan) have put on good faces for years regarding their marital woes. They’ve moved often, usually at the whim of Jerry’s wayward life and inability to hold down a job. At the beginning of the film, Jerry is working as a golf pro, only to be fired for gambling with the club’s members. When the club tries to hire him back the following day, Jerry refuses. He’d rather protect his wounded dignity and nurse a six-pack of beer.

Jeanette tries to provide moral support and find work to keep their financially-strapped family afloat, but no one wants to hire her. She takes what solace she can from part-time work giving swimming lessons and keeping her husband’s ego satiated before he adds yet more stress to their lives.

Soon reaching the end of his rope, Jerry decides to risk his life to help fight the wildfires for a dollar an hour, leaving his wife and son behind until he returns, if he returns. At first, Jeanette is distraught over his absence, but soon she’s invigorated by the freedom she’s allotted with him gone, able to seek full-time work, dress more youthful, and entertain an older businessman named Warren (Bill Camp) who has eyes for her.

All the while, Joe can’t help but recognize how his already rocky home life is imploding, but what can he do about it? Joe knows his father was messing up regularly when he was around, but the son tried to maintain the peace between his parents the best he could. Without both parents around to keep the balance, this teenager is suddenly at a loss for what to do as he sees his mother veering from whatever normalcy they’ve held onto in the past. When she stops buying groceries and cooking, Joe takes on the responsibility. When she gets flirty with Warren, Joe keeps an eye on her, hoping she will not do what he fears has already happened between his mother and another man. 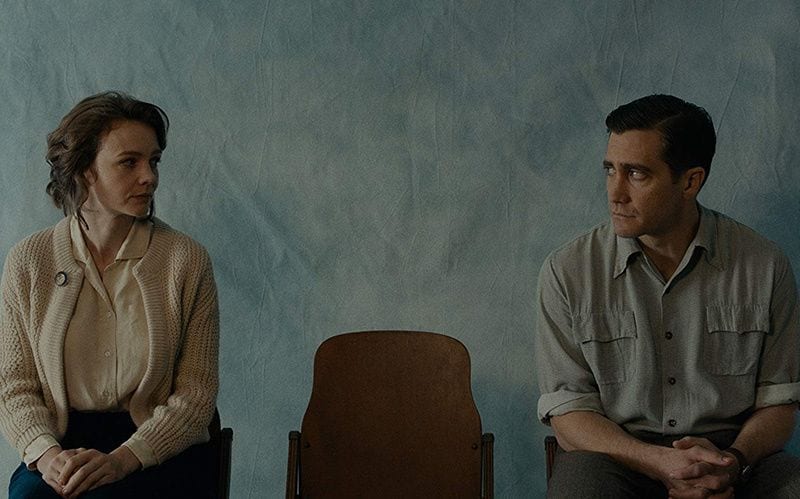 Based on the book by Richard Ford (Atlantic Monthly Press, 1990), Wildlife is an emotionally raw and literary piece of filmmaking from Dano, a first-time writer/director who is branching off his already impressive acting career into films like Love & Mercy or There Will Be Blood. He and his co-writer/real-life partner Zoe Kazan have drawn from their rich theatrical training to craft an internal drama that resembles classical directors with stage origins like Sidney Lumet or Elia Kazan (Zoe’s grandfather).

The film has a lived-in quality as we witness Joe bracing for the emotional fallout raging around him, and it helps that Dano has filled the principal roles with theatrically-trained actors who infuse Wildlife with a depth of character found in the quiet, unspoken moments. Gyllenhaal captures this in the way he portrays Jerry as a man searing with self-hate but too much of a stubborn streak to correct it, or Camp’s portrayal of Warren as a man with simmering lust that’s more powerful because he has the patience to get what he wants, a far cry from the compulsive Jerry. Mulligan as Jeanette is the most vibrant of the three, playing the part as someone who is drunk with the independence of not having a husband around and eager to recapture the youth she feels she lost becoming a wife and mother so early in life.

Oxenbould takes on perhaps the most complicated part of the cast as a protagonist whose quietness and seeming passivity are his only ways of coping with the tension swirling around him. Joe is too young and obedient a son to address the bad behavior of both parents, but old enough to be painfully aware of what’s happening in his parents’ marriage. Rather than speak out against his parents for what they do, he invokes their names, depending on whom he talks to, in the hope that guilt will impel them to do right by their spouse. More often than not, though, Joe is like the passenger in a car that’s careening out of control. Jeanette at one point brings him face to face with the destruction, driving him to a forest fire to witness its savage power. He’s terrified by what he sees, while she stands by indifferent to it. Joe talks about going east for college one day, and you hope he makes it.

As photographed by cinematographer Diego Garcia, Wildlife portrays Montana as a lonely, isolating part of America, punctuated by the mountains that serve as barriers to the rest of the world; the valleys in between only remind you of the distance. All the while buses come in and out of the community taking people to other places, maybe where life is better. It’s likely that Joe will get away to somewhere and move past the chaos in his life, but at 14 that day appears as distant as the rest of civilization.