Ever since Art Spiegelman’s Maus won a Pulitzer in 1991, the graphic memoir has been comics’ avenue into mainstream literature and academia. Though an academic and comics scholar myself, I was surprised to learn that another university press has ventured into the increasingly esteemed field of comics publishing. This spring the Pennsylvania State University Press released Sarah Lightman‘s graphic memoir The Book of Sarah under its Graphic Medicine imprint (around since 2015). While I look forward to perusing the dozen or so other titles, Lightman seems an ideal starting point for any comics reader, though especially for those with an interest in the art of sequential art.

Each of Lightman’s eight chapters feature a Torah-related title, emphasizing the religious focus of her upbringing—one that resulted, directly or indirectly, in her suffering decades of anxiety and insecurity. Or maybe she would have suffered the same if she had grown-up in another religion or in none at all. Still, the absence of a biblical Book of Sarah speaks metaphorical volumes.

Unlike most comics creators, Lightman is not interested in layout norms that treat a page as a multi-image unit. Most of her pages feature a single work of art, and when they include two, it seems to be due to the width of the images requiring, or at least inviting, a pair to be positioned in a column. She rarely includes more than two—though the exceptions are striking: a family portrait redrawn in incomplete fragments; a repeating half-full, half-empty water glass providing a visual metaphor for her shifting optimism. She extends beyond a 2×2 structure only once: two pages divided into a Warhol-like 3×3 grid of self-portraits in varying styles, but all with vague backgrounds that she uses to emphasize her inability to engage fully in her life. 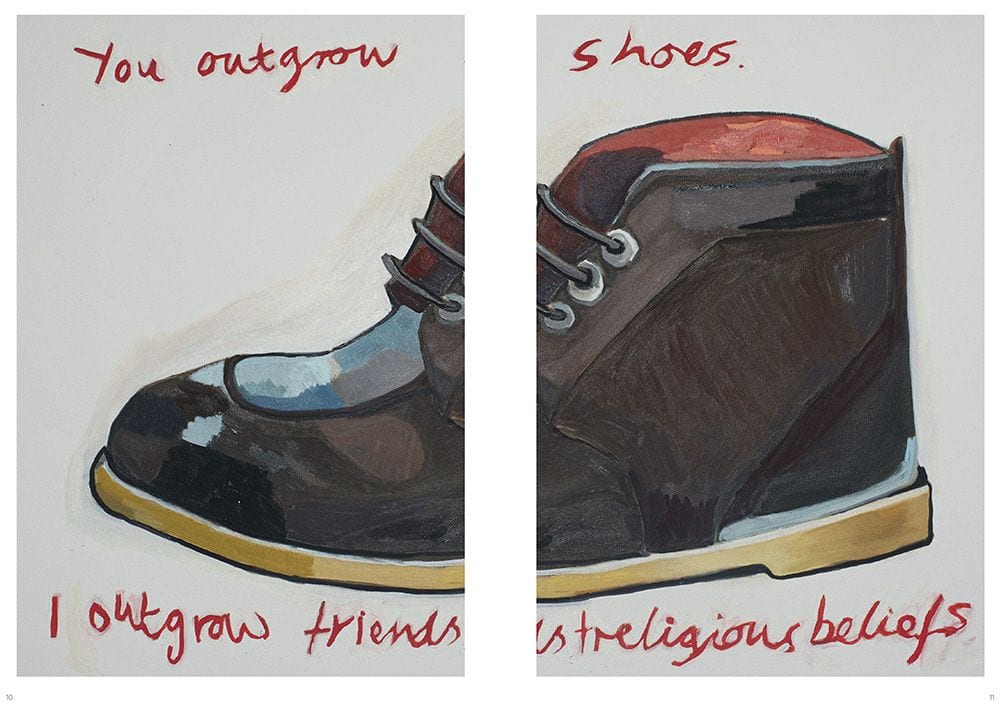 Lightman also eliminates the related comics norms of drawn frames, instead letting the white of an image background bleed into the white of the page or, if the image is drawn to its edges or on cream-colored paper, letting the image float freely in the whiteness. The visual approach emphasizes the images as artwork rather than just pieces in a narrative—though they function at that level too.

Lightman’s narration appears beneath most images, ranging between four words (“Smile, said the midwife.”) and 140 (in an atypically long account of her grandparents’ immigration to England from Lithuania). Lightman uses a handwriting-imitating font, which is a nice gesture, but the perfectly identical letters and spacing is an imperfect match to the intensively hand-created images above each, some of which include their own hand-drawn words.

But the font choice also establishes a sense of two-worlds, the visual and the verbal, playing against each other. Here’s where Lightman proves herself not simply an accomplished artist, but specifically an accomplished comics author. While the art world is full of excellent artists who could fill a similarly sized book with equally well-crafted drawings, few have the comics savvy to construct the sort of complex narratives and image-text relationships that Lightman achieves in her memoir.

She narrates, “Things and spaces speak for me,” a reflection on the form of the graphic memoir, especially in her ability to shape her experiences into visual meanings. After describing reading Eric Carle’s The Very Hungry Caterpillar (1969) to her son, she begins a litany of the foods she ate as expressions of her former insecurities, moving into other kinds of objects — the gift of a plant, a boyfriend’s toothbrush, her cell phone as she waits for him to call, the bench she sits on, and finally a two-page spread of its pencil-gray view. 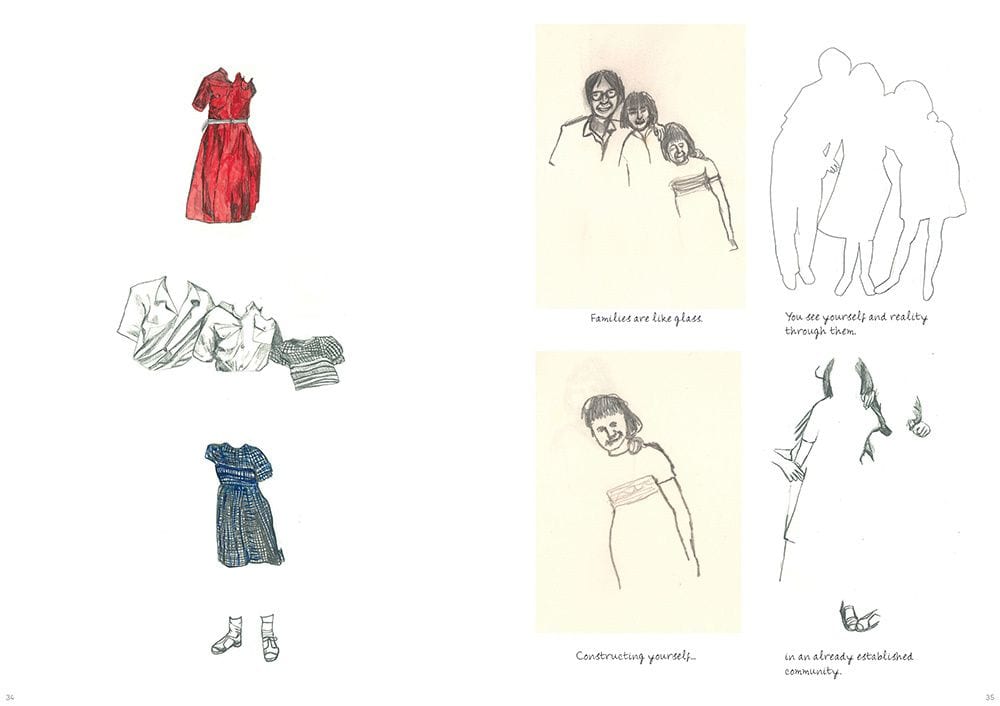 The images match her words—and yet Lightman is absent. Her cellphone floats in the white of the page instead of the palm of her hand. She draws the bench twice too, but never herself on it—an absence that poignantly contradicts her narration. When she does finally draw herself, in a three-image zoom-in of a framed photograph that begins with blanks spaces where her and her former lover’s faces belong, it is a sudden, full-color close-up that visually states far more than the word “happy” repeated in the narration below it can.

Elsewhere Lightman’s word-image combinations are even more inventive. She writes that her “scaffolding of self was barely holding up” below a self-portrait that includes scaffolding in the background. Assuming the image is drawn from a photograph (as it and many others presumably were), did the incidental inclusion of the background detail prompt Lightman to develop scaffolding into a verbal metaphor or did she write the sentence first and seek an image to match it, possibly adding the scaffolding? While such process-focused questions are usually non-essential to a final product, they are more revealing for Lightman since her memoir is about process in multiple senses.

At times she seems to be selecting images from her pre-existing work to include as needed, while at other times she seems to be drawing in order to fill a narrative need. And there are even moments when an image seems to be included for its own sake, making the narrative flow bend around it. All three approaches are intriguing, but their combination is even more so. Since Lightman is depicting her years-long struggles with depression and her varying attempts to overcome it, the vacillating approaches take on further significance. 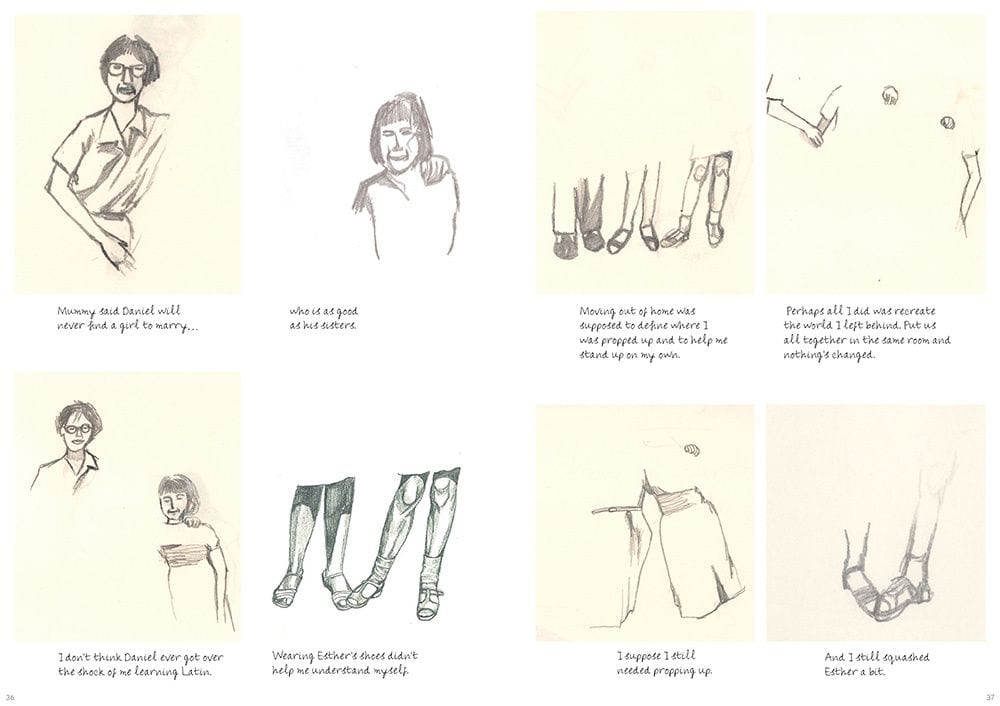 Lightman herself seems to be more than one person—or rather herself at different moments in her evolving life. Her self-portraits and varying styles capture this effect, but her verbal narration emphasizes it too. At times she speaks retrospectively, looking back on past events from a present tense grounded somewhere around 2015: “From where I draw now, I can see a church and a synagogue.” At other times her present-tense narration is a diary-like account of past events as they seem to be happening: “I asked a stupid question in a talk. I feel bad about it now two hours later.” She offers no visual cues (a change of fonts, a sudden shift in the visual style of an accompanying image), but the effect is subtle and so no obstacle to reading, while also offering rewards to greater attentiveness. It also makes the words image-like, snippets seemingly pulled from the same sketchbooks as many of the images.

Ultimately, Lightman finds herself, metaphorically but also visually, as her later self-portraits suggest. She even addresses “young Sarah” as a separate entity she wishes to console. This is not a narrative surprise, since the shifting time perspective reveals her marriage and child’s birth midway through the memoir, even as it then wanders back to lonelier times—when “the hole inside” parallels more empty-faced, incomplete portraits of herself attempting to be a good daughter and granddaughter and niece, as well as girlfriend to variously less-interested boyfriends. It’s also no surprise that she’s no longer an Orthodox Jew by the end—though her spiritual life seems more complexly deep after she becomes a mother.

There is so much more here worth analysis and praise—the use of a carton of eggs in a reverie about contemplating pregnancy; the distantly rhymed images of her therapist’s shoes, the first male, the second tellingly female—but I will leave it to readers to explore themselves.