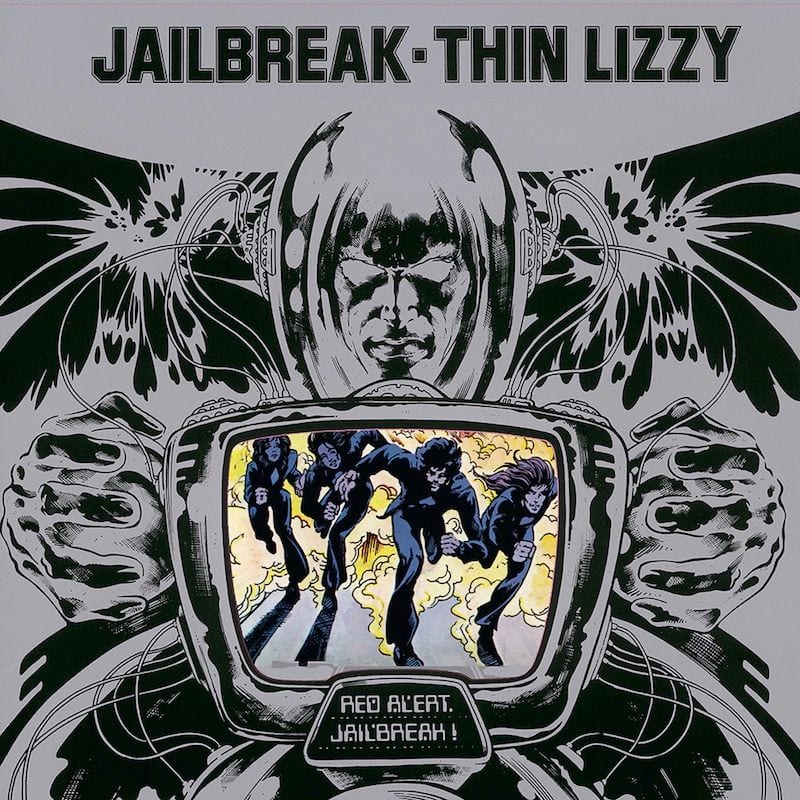 Klinger: I’ll be honest with you, Mendelsohn. I’ve never given much thought to Thin Lizzy. As a sentient human being with a beating heart, I enjoy the song “The Boys Are Back in Town”, and I know I have a copy of Jailbreak on vinyl around here somewhere. I’ve been in a few party situations where a few guys were gathered around the stereo waxing rhapsodic about Scott Gorham and Brian Robertson’s twin-guitar attack. And I remember when Phil Lynott died (30 — good God, really? — years ago), and thinking that was a damn shame. Still, they’ve never been a group I’ve really sat down and paid close attention to. Which is also a damn shame, because Jailbreak is a very good album. Fusing Dylanesque and Springsteenian lyrics with harder rock guitars, Jailbreak seems like one of those albums that it’s difficult to argue with. Theoretically, it should appeal to rock nerds of all stripes.

What surprises, me though, Mendelsohn, is that it appeals to you. After all, coming in at No. 813 on the Great List, Jailbreak isn’t quite canonical. And I feel like you’ve taken me to task for championing “second-tier” groups like the Zombies or even the Who (although I still think you were just baiting me there). You’ve expressed your skepticism regarding Dylan, Springsteen and hard rock power chords. Even given what I’m pretty sure is the undeniable appeal of Jailbreak, I feel like if I had selected it you would have given me some measure of guff for it. I’m still suspicious that you’re setting me up for some sort of rock and roll sucker punch here. So you’ll forgive me, but I have to ask — what is your deal with this album?

Mendelsohn: I wish I had some long, drawn-out backstory as to why I picked this record. The sad truth is, I found out about Thin Lizzy in the 1990s when Metallica released a cover compilation that included “Whiskey in the Jar”, an old Irish folk song that Thin Lizzy had previously gussied up. Thin Lizzy’s version was better. Also, I live in the Midwest and both “The Boys Are Back in Town”, and “Jailbreak”, are in constant rotation on all of the classic rock radio stations (The only kind of radio station that plays music that we are allowed to have. The other radio stations that don’t play music consist mostly of shouting). But that is neither here nor there.

I chose this record for one simple reason — I love “The Boys Are Back in Town”, and I will listen to it at full volume, on repeat until forced not to. And had you picked this record, I would have delighted in giving you guff about it, mostly for Springsteenian and Dylanesque lyrical material hiding behind the onslaught of dual riffage. I probably would have called them the Irish Cheap Trick and made it clear that I meant that in a derogatory manner, not some sort of quasi-compliment. Honestly though, I can’t find much wrong with this record and I wanted an opportunity to listen to it some more. This record, like Cheap Trick, Bruce Springsteen and even Bob Dylan, speaks directly to my Midwestern heart. The working-man lyrics, even when ridiculously done as in “Cowboy Song”, come across as earnest and heartfelt. Plus it doesn’t hurt to have Gorham and Robertson waiting in the wings to spice up the goings-ons with a twin attack.

I am a little disappointed by this record’s placement on the Great List, it plays much better than a ranking at No. 813 would suggest. Maybe it has something to do with the slower songs like “Romeo and the Lonely Girl”, or “Fight or Fall”, but even where “Fight or Fall” fails I find it intriguing for the 1970s soul queues that pop up at the end (a nod to Marvin Gaye?). For my money, Jailbreak plays from near strength to strength and I am a little upset that you referred to them as second-tier.

Klinger: Dammit, Mendelsohn, stop twisting my words, if for no other reason than the spirit of camaraderie. Which is really the central theme of Jailbreak. The general sense of brotherhood is all over this album, whether Lynott and company are pretending to be warriors (“Warrior”), cowboys (“The Cowboy Song”) or boys who are back in town (“The Boys Are Back in Town” — OK, maybe song titles weren’t their strong suit.) Rock groups have always been smitten with the idea of themselves as some sort of band of marauders swashbuckling their way from town to town, but Thin Lizzy seems to have made that a key component of their persona. That’s probably a big reason why this album resonated so deeply here in the Rust Belt, where young men were hungry to light out for grand adventure, even if they never made it as far as Akron for a Sales Managers conference.

I find your lack of enthusiasm for a song like “Fight or Fall” most interesting, though. Because it points out that, for all the hard rock blustigating that’s going on here, there’s also an undercurrent of sweetness throughout, Jailbreak has several moments that remind the listener that the spirit of Van Morrison looms large in the legacy of any Irish rock band. Van’s certainly the man I hear in hiding in the shadows of a song like “Romeo and the Lonely Girl” — a song that could just as easily sound Springsteenian to some listeners (of course, there’s a lot of Van in Bruce’s musical DNA as well). And I’d rather hear that strain of Celtic soul than the more generic hard rock of “Warrior” or “Emerald”, so I’m reluctant to call “Fight or Fall” a failing—more a matter of what it is we’re here to listen for.

Mendelsohn: I didn’t call “Fight or Fall” a failure. I merely wanted to note that it wasn’t nearly the strongest song on the block. But that might be unfair because I’m comparing that song to “The Boys Are Back in Town”, which for my money, is damn near perfect. Seriously, if you want to talk about a bar band making good on their blues roots, “The Boys Are Back in Town” is the epitome of rock perfection. “Fight or Fall” just doesn’t start off with the twin guitar attack that propels most of the record. It isn’t until the listen gets further into the song that we see Thin Lizzy expand on their pop repertoire, taking, as you noted, a page from Van Morrison’s book of soul. Plus, I love the goofy studio tricks as the vocals come at each other across the left and right channel. But I think “Fight or Fall” and “Romeo and the Lonely Girl” take a back seat to “Running Back”, in terms of both song writing and Van Morrison influence. “Running Back” was the song that Lynott and the band were really pushing for radio success with fleshed out instrumentation. Plus that silly little keyboard riff never fails to get stuck in my head. And while it is a fine song, it didn’t connect with audiences like the band hoped it would.

Originally, “Running Back” was written in the blues rock vein like many of the songs on the album. The song was picked as the lead single after some session musicians were brought into soften it up a bit. I can’t fault the band for making that decision. At this point, Thin Lizzy was in the middle of what would be a 12-album career. After disappointing sales of their two previous albums, the record company was starting to get a little twitchy, giving Thin Lizzy one more chance before cutting them loose. I can’t say I wouldn’t make the same choice, but in hindsight, I think Jailbreak would have been a much more cohesive and well-received record if the band had pushed the blues and hard rock side of their music. This type of change might not have gotten them out of the second-tier status, but the one thing that made Jailbreak great was the propulsive rock, not the artistic nod to a fellow Celt.

But even as I say that out loud, I know I’m wrong. Nothing but a dual-guitar attack would have left the band one dimensional, even on the strength of “The Boys Are Back in Town” and “Jailbreak”, the record needed something extra. Thin Lizzy couldn’t get the stars to align, but the Celtic soul saves the group from being relegated to the lower and forgotten tiers of rock, and, if for nothing less, provides a quick reminder as to why I keep returning to this record — it’s all about the rock.