It’s difficult not to watch Slay the Dragon, a timely and anger-inducing yet ultimately hopeful documentary about the anti-democratic practice of gerrymandering in America, and not think, when learning of the history of this practice, Is that what democracy used to look like? It used to be that when a group of voters became invested in an issue, they would coalesce—usually at the behest of one or more extrovert chipper optimists—and hit the streets and halls of power to change minds.

Recurring scenes in the documentary show a grassroots group led by Michigan activist Katie Fahey (yes, an extrovert of seemingly bottomless buoyancy) knocking on doors and approaching people on the street to get signatures. By the time Slay the Dragon hits (home) theaters on 3 April 2020, a good part of the world will have been on some version of stay-at-home soft quarantine for just a week or two. And yet what we see in the movie, people thronging together in apartments and on sidewalks or in capitol rotundas already feels like an era past.

Slay the Dragon starts, as so many dissertations on the failings of modern America do and should, with Flint, Michigan. But rather than zeroing in on the racial and class warfare catastrophe of Flint’s the water crisis, the movie pulls back to see where it started. State Republicans eager to clamp down on Democratic leaders’ ability to spend money and help their constituents had passed a law allowing the state to appoint Emergency Managers with unquestioned powers over a municipality’s finances. It was just such an appointee who decided it made way more sense for Flint to get off Detroit’s well-functioning clean water supply and start pumping their own in from the catastrophically polluted Flint River.

The undemocratic nature of that unhealthy and fiscally ruinous mistake serves as a good illustration of why Fahey’s group pushed to overturn the law. Of course, once they did in 2012, the GOP legislature simply tweaked the law, passed it again, and made it impossible to rescind. So Fahey’s activists began pursuing a bigger target with deeper ramifications: Ending political control of how the state’s electoral districts are divided up, the process commonly referred to as “gerrymandering”.

Directors Chris Durrance and Barak Goodman are pursuing two goals with Slay the Dragon. One is a portrait of modern resistance to gerrymandering. The other and perhaps more pertinent is to provide a short modern history of gerrymandering itself. They do this in large part by going to one of the best sources: David Daley’s pungently hard-nosed 2016 expose: Ratf**ked: Why Your Vote Doesn’t Count. Daley is one of the many experts corralled by the directors to lay out this history. 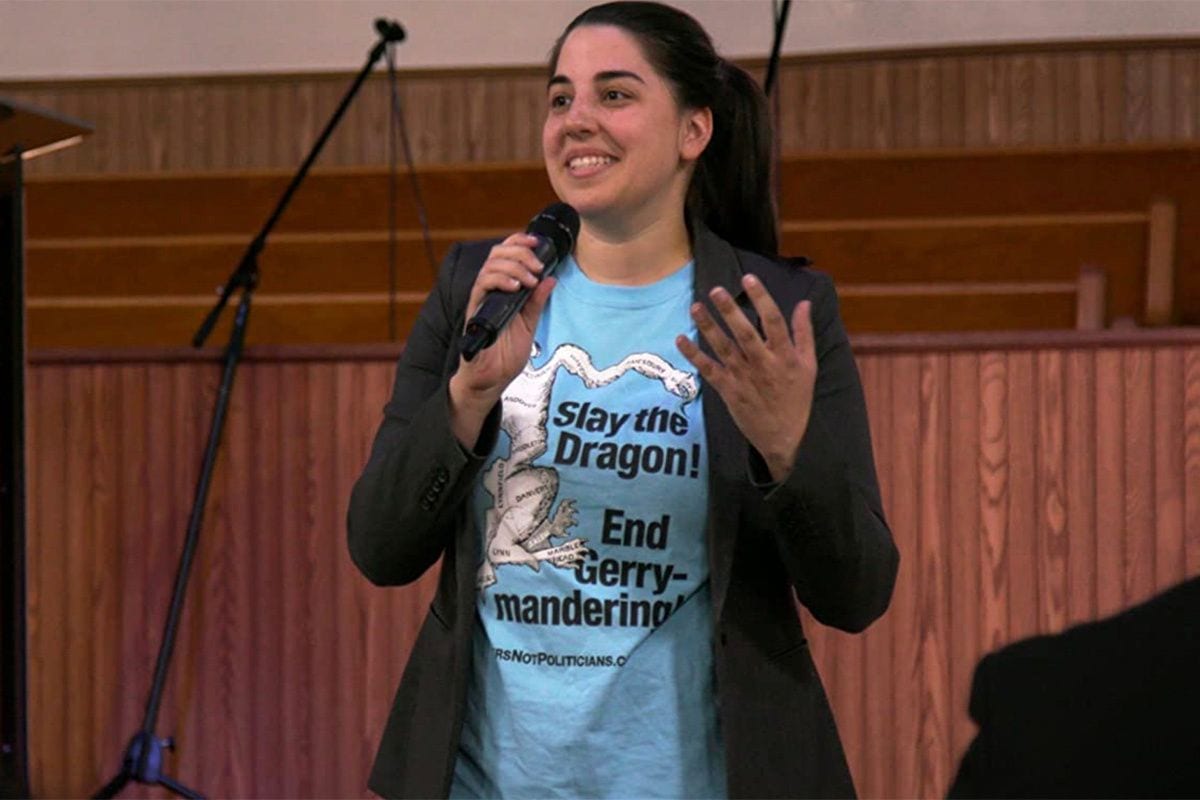 The movie notes that, like many American political practices, redistricting was once a bipartisan affair. For decades, Democrats and Republicans drew voting districts favorable to their candidates, often resulting in electoral districts as geographically tortured as they were demographically precise. Terms like “cracking” (dispersing a rival party’s supporters across multiple districts to dilute their power) and “packing” (reversing that by jamming as many as possible into one district, also diluting their power) were little known outside legislative wonk circles.

But after Barack Obama’s 2008 election, the GOP discovered a devastating new tactic. It’s outlined in the movie by its inventor, conservative strategist Chris Jankowski, who might have a Machiavellian lack of morals but at least shows up here to make his case. Called “Project REDMAP”, the plan was to create a bulwark against the demographic shifts imperiling the Republican party by spending a few tens of millions of dollars (chump change in 21st century national American politics) on down-ticket races. This allowed the GOP to flip state legislatures and thus win the ability to redraw the voting district maps in their favor for the 2010 election.

REDMAP was a surprise success; another example of the modern Democratic Party being outflanked and outfought by Republicans. It resulted in a Tea Party tsunami that retook the House that year and left behind a Maginot Line of districts so safe for some Republicans that they could cast as many extremist votes as they wanted without fearing a loss. Then, once state houses were in Republican hands, a corporatist legislative clearinghouse like American Legislative Exchange Council ( ALEC) could airdrop into those capitols nearly identical readymade laws on everything from union-busting to outlawing abortion and defunding public education. The sections of the movie focusing on Governor Scott Walker’s pursuit of gerrymandering-empowered no-holds-barred conservative dominance in Wisconsin are particularly emphatic and chilling.

Despite the white-hot fury tactics like these garnered in the American left, Slay the Dragon keeps its tone mostly free of polemic. After laying out the GOP strategy for keeping power while losing elections, the focus shifts to activists like Fahey and another group in Wisconsin who are pursuing court challenges as a way of wrenching control of districting out of the hands of politicians and giving it to (hopefully) less partisan technocrats. These sections can feel familiar at times. But the beaming urgency of the activists’ mission cannot help but shine a light through the movie’s otherwise tangled murk of legislative chicanery.

Like the Electoral College, gerrymandering is one of those topics that comes up every election cycle or two. A great majority of people agree that it makes no sense, and yet these anti-democratic institutions just keep grinding on. This year, 2020, is a potentially big one for gerrymandering, given that it’s not only a presidential election but a census year, meaning districts are up for redrawing after the new population numbers come in. While Slay the Dragon does not break a lot of new ground, it is a smart and cogent summation of a crucial political problem that deserves attention even during these times of the COVID-19 global health emergency.

If the filmmakers, writers, and academics involved in this movie have done their job, there will not need to be another gerrymandering documentary in 2030.