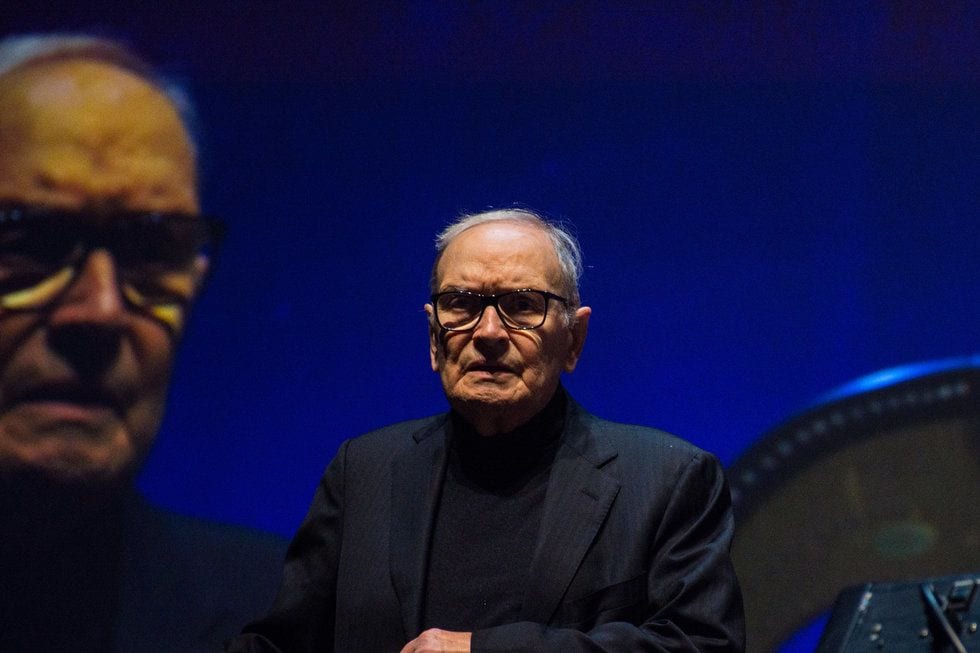 Most journalistic articles are opinion pieces, and all art reviews certainly are opinion pieces, at least to a degree. When retelling a live music show, more often than not the narrative is filled with platitudes and exaggerations: “legendary”, “epic”, “genius”, and “unique” are the buzzwords often used to describe your favorite musician’s tunes, performances, or their career in itself. While for many narrators this feels like the Truth, when faced with a concert genuinely deserving of such words – one feels at a loss for what to say.

Such a brilliant torment occurred on Jan 21 at the Mercedes Benz Arena in Berlin, where Ennio Morricone celebrated his 90th birthday by staging a 150-plus-minute performance, involving 200 musicians and spanning his 65-year-long, still ongoing, career. To say that the legendary composer’s epic performance which lasted more than two and a half hours, full of genius melodies spanning his uniquely long and productive career, was brilliant, would be a foolish understatement. Morricone’s enduring symbiosis with cinema, which birthed his ability to create exceptionally vivid imagery through sound, still evokes an overwhelming diapason of emotions and takes one’s soul to exciting and unexpected places.

Since 1950, the famed Roman instrumentalist has penned the scores for more than 500 films, continuously shaping the ways music meshes with dancing images. His impossible versatility and the embroidering of numerous cultures and traditions in his works, are to thank for bringing movie soundtracks into the global mainstream, and also for generously helping this composing niche be perceived as serious art today. Morricone’s collaborations with Sergio Leone and other notable directors from the golden age of the (spaghetti) Western, along with the adoration that the likes of Brian De Palma and Barry Levinson had for him, is common knowledge of every film geek around the globe. While his influence on scoring films can be elegantly summed up in a paragraph, adequately describing the breadth of Morricone’s output, his other ventures are all but impossible to illustrate succinctly. 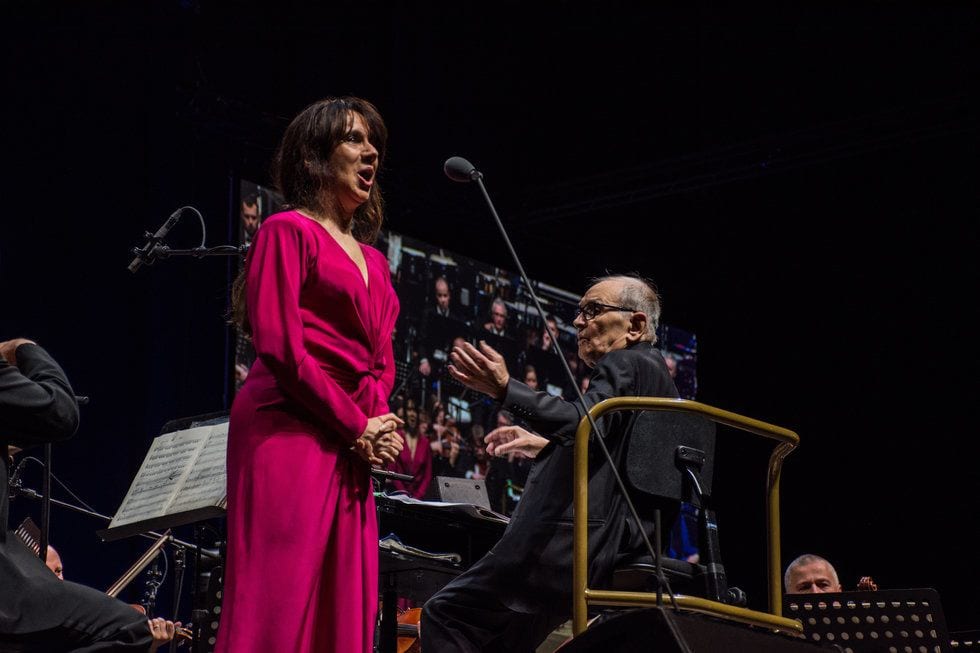 A classically trained trumpeter, Morricone kicked off his remarkable career by composing music for radio dramas in the 1940s. During those years, he also provided for his family by playing jazz in a local Italian band and arranging pop songs for RAI (where he had also been employed for one full day prior to quitting upon finding out that the television station prohibited the broadcasting of music composed by the employees). However, during this period he also started ghost writing film scores for renowned Italian composers. Word about his talent got out fast and the beginning of 1960s saw him deliver his first “legitimate” film scores. The rest is history we know well, but even as a prolific movie soundtrack architect, Morricone, to this day, continues to also write classical music and explore the boundaries of modern composition. In fact, as one of the ringleaders of the Italian avant-garde, from 1964 until 1980, he was a part of Gruppo di Improvvisazione di Nuova Consonanza (G.I.N.C.), widely considered to be the first experimental composers collective. Their seven studio albums are held in high regard in the avant-garde music circles to this day.

His professional eclecticism and achievements have undoubtedly become made their mark on music history, but Morricone’s personal character is just as fascinating as his work. A devout Roman, he refused to move to Hollywood or learn fluent English, staying true to his hometown until this day. Married to the lyricist Maria Travia since 1956, he is the father of four and a committed family man, a peculiar and admirable fate for a person who consistently managed to remain one of contemporary music’s most productive authors, over the course of more than 60 years.

This strength of character and diversity spring to life magnificently in Berlin’s sold-out Mercedes Benz arena, where some 11,000 people spared no expense (the average ticket price was around $120) to bid the grand maestro a rapturous goodbye. Though Morricone performed well over 400 concerts in the past 20 years (for clarity, this was all at the age of 70 or over), this time around a (somewhat) crowd-pleasing and thematically segmented retrospective of his work felt particularly poignant. 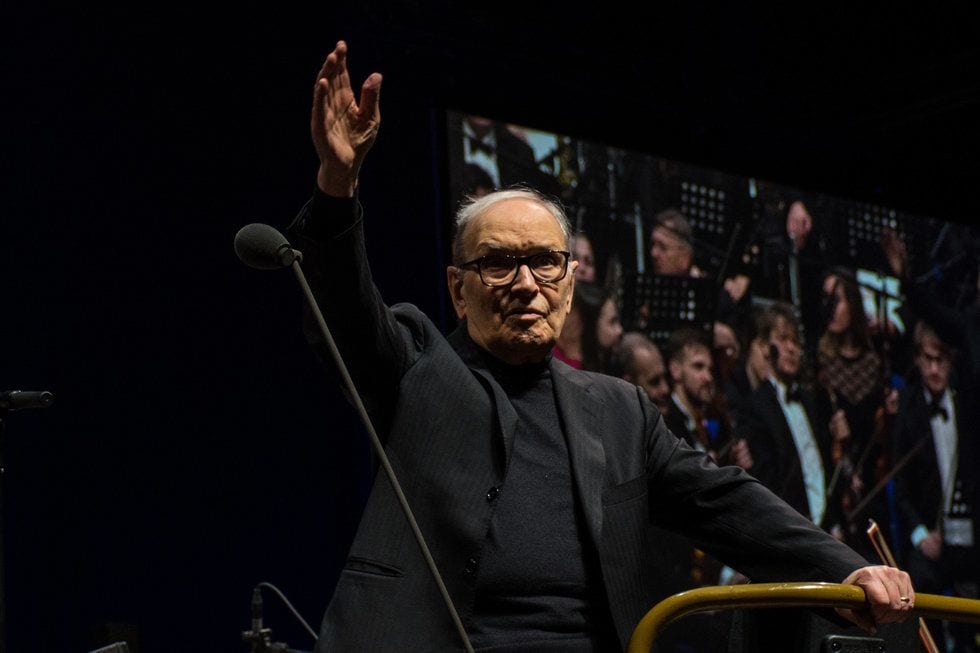 Sitting in front of the Czech National Orchestra and the Hungarian Kodály Choir of 75 singers, Morricone conducted the 24 beloved compositions with attentiveness and vigor, and a relaxed hand of a man who has truly accomplished everything one can accomplish in their lifetime. Promptly springing upward to turn to the audience and take a bow after nearly every tune, his face, while conveying gratitude for people’s enduring interest in his work, shows a humble look of a man whose experience of life is well beyond what a 30-year-old or even a 60-year-old can imagine. And the concert itself was wonderful, at turns grandiose, playful, and solemn.

The majority of the crowd was around 50 or over, but there were also plenty of young faces present, and they seemed the most mesmerized by the show. Evidently, the massive sports hall is not the most acoustically refined venue for such an impressive orchestra and, admittedly, the glorious Berlin Philharmonie would have been a far more appropriate choice, but a large enough space had to be provided to honor Morricone and this was Berlin’s only safe bet. The sound itself was good enough, although the magnificent voices of soprano Susanna Rigacci and the fado diva Dulce Pontes were often overpowered and drowned out by the orchestra.

Split by a 15-minute intermission, the program is divided into two parts and several thematic wholes. The “Historical Epic” kickoff was a deliberate slow start, with the solemn, naturalist themes from The Untouchables and The Red Tent. “Novecento” from Giuseppe Tornatore’s revered drama The Legend of the Pianist on the Ocean, and “¡Átame!”, from Pedro Almodóvar‘s dark comedy, provide further insight into Morricone’s eclecticism. The diversity of his tunes and themes is unprecedented in contemporary classical music and nearly all songs were greeted with standing ovations. Susanna Rigacci excelled in “Nostromo”, but it was the succeeding “The Modernity of the Myth”, an homage to Sergio Leone’s most famous films, that got nearly everyone to move to the edges of their seats in excitement and awe. “The Man with the Harmonica”, with its drawn out, pained harmonica howls morphing into a visceral, guitar-driven march, remains one of the most intense and compelling film songs of all time, but hearing “The Ecstacy of Gold” live, with a class soprano and a 150 musicians bringing the galloping thunder to the masses, is an experience which renders any attempt at a retelling futile.

Morricone is well aware of the power of his compositions, and has always measured his penchant for the dramatic and grandiose with gusto. The bombastic, faster second half, sees the world music diva Dulce Pontes at her best, owning the Social Cinema theme with emotion only found in fado people. “Last Stage Coach to Red Rock“, from The Hateful Eight (also the first film which brought Morricone an Academy Award) is as brilliant as any of his earlier works, but the grand finale is saved for the epic, lively “Abolição”, the theme from Burn. Here all 75 singers support Pontes, who chants dancingly to the uniquely Brazilian hymn of love and life. The final three tunes are all from The Mission, one of Morricone’s most-loved non-Western soundtracks.

One may think The Mission melodies not pompous enough for a final bow – and one would be right. After a lengthy standing ovation and cries from the audience, Morricone happily returns to the stage and launches – but of course – “Nuovo Cinema Paradiso”. That he chose to repeat “The Ecstacy of Gold” and “Abolição” (barely 20 minutes after it had been initially played) as the actually final couple of songs for the encore, is unsurprising – despite the fact that Morricone composed well over 2,000 hours worth of music. The sheer magnitude of those two epic tunes is only ever appropriately portrayed like this – with 200 musicians storming the venue in musical fury. Both for older lifelong fans, and the young generations alike, this night offered a unique insight into the mind – and soul – of one of the greatest composers alive. We will miss him sorely, but not for long, as Morricone doesn’t plan on retiring and wants to focus on classical music exclusively from now. Even at 90, he still has enough dedication left in him to continue to inspire us, in more ways than one. Thank you for all the life lessons, nostro Gran Maestro.