In its new blu-ray edition of Ernst Lubitsch’s Heaven Can Wait (1943), Criterion Collection includes, as an extra, an engaging 2005 conversation between noted film critics Andrew Sarris and Molly Haskell. Although they never mention it during the conversation, Sarris and Haskell were married. This seems particularly appropriate for a discussion of Lubitsch’s Heaven Can Wait, a comedy with deeply melancholic undertones that examines the not-quite-conventional marriage between New York playboy Henry Van Cleve (Don Ameche) and the Kansas heiress to a fortune amassed through the distribution of beef Martha Strable (Gene Tierney).

Henry is the pampered son to doting mother Bertha (Spring Byington) and doting father Randolph (Louis Calhern) and the spoiled grandson to Hugo (Charles Coburn). Henry is never asked to take on any responsibility and he never volunteers to do so. His grandfather amassed a fortune, his father augmented it, and later his son takes the reins of the family business and augment it further. But somehow Henry never seems to do anything particularly productive. He’s a rake.

His earliest attempt to woo a girl (when he was a child) involved plying her with captured beetles. He later got drunk with the French maid (Signe Hasso)—and perhaps did more—and still later was seen cavorting with a showgirl—and perhaps did more. Henry becomes enchanted with Martha who is, at first, engaged to Henry’s cousin, the uptight and punctilious Albert (Allyn Joslyn). Henry and Martha elope.

For ten years, they are happy and have a son. Then Martha abandons the marriage and returns to her estranged parents, discovering that Henry is buying expensive jewelry for yet another showgirl—and perhaps doing more than that. Henry and his grandfather Hugo convince her to “re-elope” and she returns to him. Henry’s son Jack (Michael Ames) begins as something of a rake himself—but that just leads to Henry visiting with yet another showgirl, supposedly in an effort to pay her to stay away from his son (this time he doesn’t seem to do anything more than merely visit her). After Martha’s death, Henry continues to cavort and dies in the presence of a pretty young night nurse who takes his temperature—and perhaps does something more.

The “perhaps” is, of course, an essential element of what is referred to as the “Lubitsch touch”, that rarefied ability during an era of censorship and conservative family values to deal in an open yet sly manner with infidelity, adultery, loose sexual mores, and mild immorality. Lubitsch films are full of wit, irony, and sophistication; they explore adult themes in a markedly light manner. Indeed, the touch is so exceedingly subtle that Sarris and Haskell are convinced that Henry is guilty of no more than excessive flirtation, satisfied that he never actually slept with any of his dalliances during his marriage. Perhaps their admiration for the film and its main character force them into this belief. Lubitsch prefers to wink at such things rather than directly address them. His is a cinema of innuendo and gentle misdirection. Haskell and Sarris—waxing enthusiastic over Lubitsch’s grace, delicacy, and hidden depths—prefer to focus on Henry’s charm, his world-denying innocence, his beguiling (rather than offensive) infidelity.

Indeed, the film goes to great lengths to preserve Henry’s rakish innocence, his nonchalant shirking of any vestige of responsibility. It employs various strategies to attempt to prevent the viewer from holding Henry to account as we undoubtedly would a person in our own lives. First, Henry is protected from public history. Although he is born in the 1880s and dies in the year of the film’s release, the screenplay for Heaven Can Wait makes no mention of nor allusion to World War I, the Depression, the rise of fascism, the onset of World War II, or the US entry into that war following the bombing of Pearl Harbor. He and his family appear to be entirely immune from such world events. This is essential to the film’s success. If we were to recognize that Henry continues in his frivolity during the Depression, that he seeks to have a fling with a woman less than half his age as the world falls into chaos, we might be tempted to hate him a little.

Second, Henry is protected even from family history. Over the course of the film’s running time, we become aware that Henry’s grandmother dies (before his elopement), then his father (sometime before his tenth wedding anniversary), then his grandfather and mother (before his 25h anniversary), then his wife (shortly after that anniversary). But none of those deaths are portrayed on-screen; we hear of them merely in passing without any particular weight being placed on them—except, perhaps, on the death of Martha. When trying to convince his son to hire a 24-year-old woman to “read” to him now that he is 60 and his eyes are weakening, Henry sees a book that recalls his first meeting with Martha.

Sarris and Haskell were clearly touched by this scene; for them, it’s another instance of Lubitsch’s vaunted subtlety. But it merely passes and leads to another punchline. The onscreen separation of Henry from tragedy is clearly calculated. If we were to bear witness to Henry returning to his overweening jocularity too soon after seeing him mourn one of his many losses, we might be tempted to hate him a little. 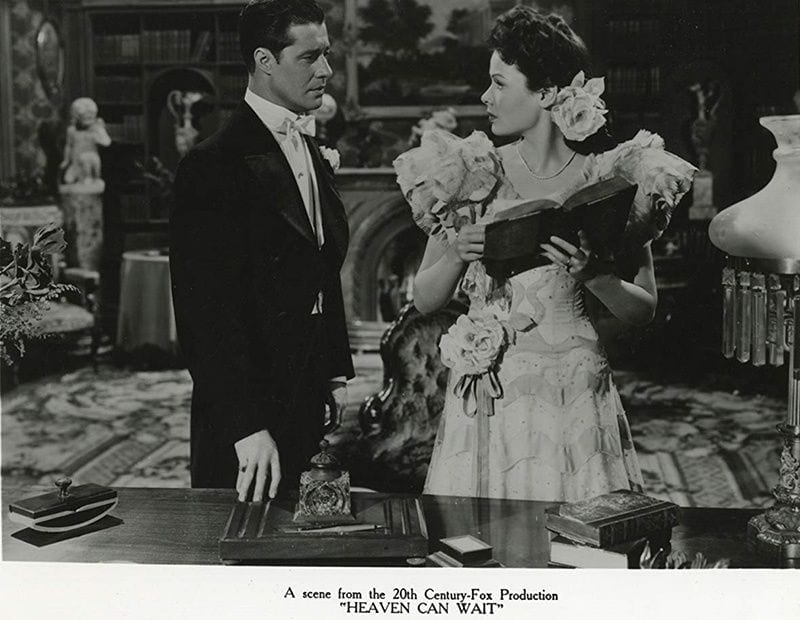 Heaven Can Wait, however, depends upon an audience indulging Henry in the way that his loved ones indulge him and indeed in the way that he indulges himself. The framing device involves Henry, just after his death, showing up in the sumptuous entry hall to Hell where he encounters Satan (known in the film as “His Excellency”, and played by Laird Cregar), who has not yet had an opportunity to scrutinize Henry’s file and is not entirely convinced that Henry has come to the right place. Henry assures His Excellency that, while he has not committed any crimes per se, his life has been one continuous misdemeanor. That line, like so many in Samson Raphaelson’s script, is the kind of bright witticism that elicits a chuckle but then is immediately forgotten. Haskell and Sarris lavish praise on the writing but it sputters as much as it sparkles, and even at its most resplendent it is utterly incidental.

In the end, Henry’s narrative convinces His Excellency that he ought to give Purgatory (and eventually Heaven) a shot. After all, Satan assures Henry, there are people “up there” who will doubtless vouch for him, and that goes a long way. There’s Grandpa and, of course, Martha. Satan also mentions that many of the girls that Henry seduced are probably “up there” as well, that it sounds like he “made them happy” and they would want happiness for him. And there it is. The false note that rings throughout the film becomes a crashing boom. It seems rather unlikely that Henry’s various dalliances and seductions have made the recipients of his attentions all that happy. We are meant to believe that they were happy because Henry is charming and so entirely palatable on the surface. We have, however, witnessed one moment of crushing unhappiness on the part of Martha and we can only assume plenty of other such moments were in store. The various other women never get a voice, but, somehow, I doubt they are ringing endorsements for Henry’s salvation.

This is the rotten core that resides at the center of Heaven Can Wait. No matter how engaging I find Haskell and Sariss’s enchantment with the film, I cannot accede to their critical adulation of it and of Henry. Henry is not worthy of the redemption offered him merely because he was continually cossetted, merely because he was indulged, merely because he was never directly asked to do something meaningful in the world. This is a man who was given everything and never seemed grateful. He was never overtly ungrateful, never spat upon his benefactors. But why would he? All of his needs were met.

Of course, he was courtly in his manner, poetic in his effusions over love and romance, captivating in his ability to ingratiate himself to others. Why not? He never experienced a moment’s worry aside from the fear that he might be growing a paunch in middle age. While the film endeavors to erase history in an effort to allow Henry to slouch his way toward redemption, I have trouble following suit. Redemption, I would like to think, requires a modicum of effort. Sariss and Haskell would doubtless declare this a humorless take on a Lubitsch classic—and I’m certainly not immune to Lubitsch’s charms (although I seem to be immune to Henry’s). But laughs, like redemption, have to be earned. The film, like Henry, is attractive and beguiling, but ultimately blandly false. 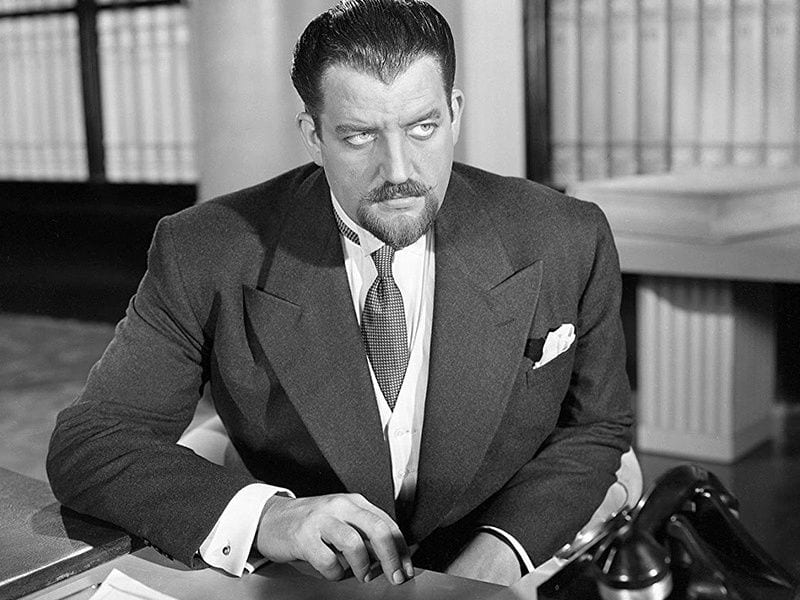 Criterion Collection provides several extras with this new blu-ray edition of Heaven Can Wait, including the discussion with Sariss and Haskell (which really is intriguing and illuminating despite my various points of disagreement), an episode of Creativity with Bill Moyersfrom 1982 discussing screenwriter Raphaelson, and a seminar recorded with Raphaelson and critic Richard Corliss at the Museum of Modern Art in 1977.