Where else to go but up for the legendary French auteur Claire Denis, whose work has influenced legions of artists but still remains criminally underseen? Championed internationally by critics and fellow filmmakers alike (director Barry Jenkins is an avowed “stan”), the septuagenarian director deserves more mainstream attention than she’s ever received. It tracks, then, that her latest film might feature the increasingly arthouse heartthrob Robert Pattinson toiling away in space.

High Life, Denis’s 14th feature, is markedly different from her last, Let the Sunshine In (Un beau soleil intérieur, 2017), in every way other than the fact that both feature the brilliant actress Juliette Binoche. In Let the Sunshine In, Binoche was mostly a victim, searching desperately for love within the French art world. In High Life Binoche is no less a victim, though one mostly of her own design; adrift in space as a prisoner, her character Dr. Dibs sedates and entices her male shipmates, collecting their semen in a futile attempt to assert control by way of forced procreation. One of the shipmates is Monte (Pattinson), who will be the last to survive alongside his child, an infant girl.

We learn this in the film’s opening moments (the film’s timeline is non-linear) as man and child are caught up in the minutiae of early childhood. Never mind the hollow spaceship hurtling light years away from Earth, which glows with blue and red-orange light and hosts a garden as lush and fertile as a forest.
High Life is really, apart from the inherent wonders of space, a prison drama at heart. Along with Dibs and Monte are several other inmates, including Tcherny (Andre Benjamin), Boyse (Mia Goth) and the captain Chandra (Lars Eidinger), who all interact with both tender familiarity and an undercurrent of animosity. Much of this is orchestrated by Dibs and her (delicately titled) “fuckbox”, which is a room that provides the prisoners with their only sexual outlet. Monte is the only celibate member of the group, guarding his chastity with an intense spiritual fervor, and yet in the end he’s the one who ends up with child.

This logic pervades in
High Life, which is more a series of tensions and breaking points than it is a traditional outer space narrative. In this vein, it resembles Andrei Tarkovsky’s Solaris and Stanley Kubrick’s 2001: A Space Odyssey, both of which fixated less on the genre elements innate to sci-fi and more on the philosophical implications of deep space isolation. In these films space is a breathtaking but ultimately destructive backdrop, pushing its subjects into either death or madness. Denis is clearly playing with this conceit; her prisoners are similar, in theory, to the flawed humans of Earth, but light years and millennia away (a TV on the ship offers the only glimpse of Earth life, which is presumed long decimated) they’re only loosely tethered to those former identities. In comparison, the prisoners are startlingly quick to become violent, whether it be as a byproduct of fear, boredom or desire. 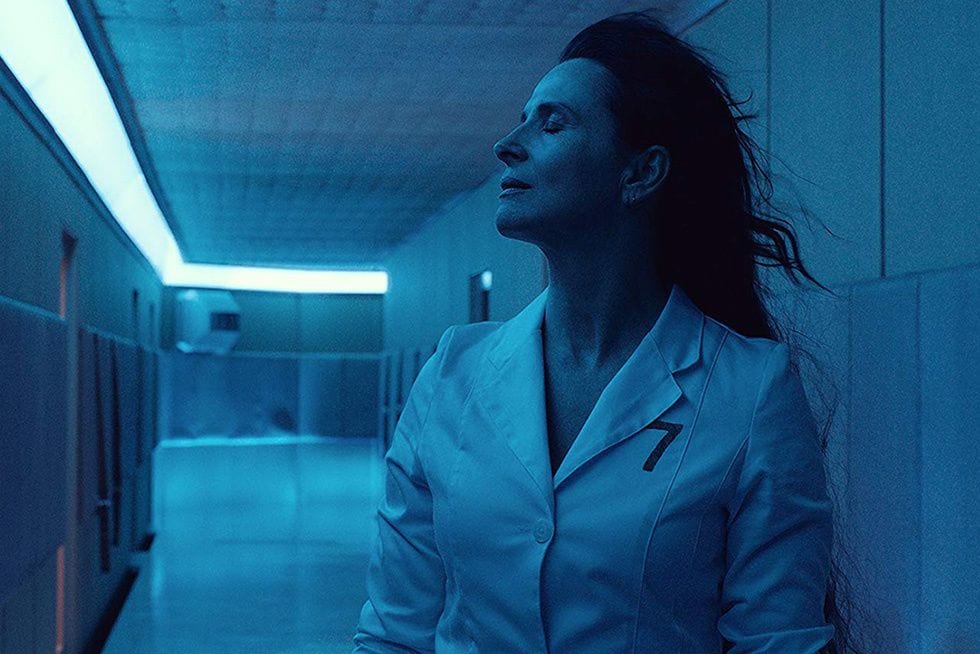 The violence and the one-by-one deaths of the inmates calls back to Ridley Scott’s Alien (1979), though here the monster is not something tangible one can easily see and cower from. It reminds of the famous Stanford Prison Experiment, in which a group of college students were asked to play as mock prisoners and guards. The psychological warfare that took place within the span of just six days in that experiment acts as a poignant touchstone for High Life, which, in comparison, centers on a much longer experiment, and with actual prisoners. But are actual prisoners, regardless of their crimes, different than students who impersonate them?

It’s unclear just how far Denis’s prisoners are into their journey, and it’s frustrating to try and create a timeline of their deaths. Chandra dies after having a stroke and Tcherny commits suicide by burying himself beneath the garden — and these are the significantly more merciful deaths. Another prisoner, Ettore (Ewan Mitchell), is murdered after attempting to rape Boyse in the night, which sets off Boyse’s subsequent murder of the pilot Nansen (Agata Buzek). Nansen had volunteered to venture into a black hole, but Boyse takes her place and dies, imploding due to the pressures of a horrifying cosmic cloud. Later, a passenger named Mink (Claire Tran) attempts to kill Dibs, but is murdered by Monte in the process. Dibs is fatally injured, but before her death she tells Monte that the child is his. (Earlier in the film, Dibs straddles a heavily sedated Monte in the night and rapes him, later inserting his semen into Boyse and producing the ship’s first healthy baby.)

On the one hand, Denis’s severe directorial style (and cinematographer Yorick Le Saux’s stark photography) illustrates these high points beautifully, and it’s easy to feel the weight of the prisoners’ deaths. But something about the film’s disheveled framing, coupled by the fact that Denis often forgoes narratively clarity in pursuit of visual immediacy, renders many of the lesser plot points somewhat hollow. As the film’s focal points, Monte and Dibs have backstories that illuminate, but the remaining characters are never quite able to transcend their status as plot devices. Especially with such committed, game actors in Benjamin and Goth, it’s disappointing to have so little to latch onto. Denis’s objectives are clearly more abstract, and yet one can only imagine the immortal resonance of some of her most striking shots where her characters given more of a chance to provoke curiosity and empathy in viewers.

With the glut of space narratives in film over the past decade, High Life is admittedly rather unique. Its austerity all but ignores the sense of wonder innate to films like Alfonso Cuarón’s Gravity (2013) and Christopher Nolan’s Interstellar(2014) and its characters — prisoners, murderers, rapists — subvert our expectations about the idealized, trailblazing astronaut. Instead, their mission is for naught. There’s no return mission (what could they return to?), and the only hopes left are those tied to some means of escape, whether it be through sex or a particularly enticing black hole. In this vision of space Denis creates a narrative well-attuned to the apocalyptic pessimism of the 21st century. But her withholding directorial style doesn’t quite achieve the level of poignance many viewers will crave, offering instead a scattershot of searing images that all too often get lost in the void.