A guy walks into a forest. That’s not the opening of a joke. It’s the first half hour of Legend of the Mountain, a spellbinding movie that runs over three hours.Viewers could be forgiven for starting to wonder if anything’s going to happen as our hero passes through gloriously shot landscapes of trees and rivers and waterfalls, with smoke blowing picturesquely and sunsets tinted to hallucinatory colors. He occasionally glimpses other mysterious figures, such as a woman in a billowy white dress blowing a flute like the Pied Piper as the lush musical score rises to penetrating tones. The story seems in no hurry to get anywhere. While it’s possible that some viewers will shift in their seats, it’s equally possible that they’ll be too enchanted to notice the passing of time.

“Spellbinding” and “enchanted” are good words for this film, because most of the characters are under spells in what turns out to be a battle of ghosts and demons for our wandering scholar’s sacred McGuffin. Decades after it was released to a lackluster box office, when it was cut by more than a third of its running time, this masterwork emerges from the mists of time in full splendid 4K ravishment on Blu-ray.

Some backstory’s in order. King Hu is, alas, among that number of the world’s glorious filmmakers whose work has been very hard to see in the video era. Trained in the visual arts, he became a writer and sometime actor who came to prominence at the Shaw Brother’s Hong Kong studio in the ’50s and ’60s, where he mentored as assistant director to Li Han-Hsiang.

Those familiar with Shaw output understand that his works are often about nothing if not eye-popping art direction. As critics Travis Crawford and Tony Rayns point out in bonus extras on the Blu-ray, Hu’s Shaw projects with Li include the gorgeous Enchanting Shadow (1960) and the dazzling opera The Love Eterne (1963). Hu also designed the title sequence of Li’s A Maid from Heaven (1963). The extraordinary beauty and vivid colors of these movies cannot be overstated, nor can their classical orientation.

Enchanting Shadow is romance about a young scholar who meets a lovely ghost in a ruined temple. The male scholar is played by a cross-dressed actress (Betty Loh Ti), as was common in Shaw movies evoking the Chinese opera tradition, although this particular movie has only one song and derives from a story in Pu Songling’s 18th Century collection of spooky tales, Strange Stories from a Chinese Studio. Pu’s book is among the eternal and primary sources for Chinese ghost movies, including Legend of the Mountain, although it’s equally valid to declare King Hu as an inspiration for the ghost movies that came after him, such as the famous Hong Kong trilogy A Chinese Ghost Story.

The Love Eterne, in which Hu also plays a supporting role, is a lavish widescreen spectacle about a woman (Betty Loh Ti again) who goes to school disguised as a man and falls in love with her classmate, with tragic results and ultimately a semi-animated fantasy finalé. For those unaccustomed to Chinese opera, the sheer bizarreness is enough to make one sit still for the two hours of caterwauling. Adding a curious level is the fact that the “boy” she falls in love with is also played by an actress, the glamorous Ivy Ling Po.

We repeat that such conventions are common in Shaw productions of this ilk, though it reverses the era when men played women’s roles. Among other Shaw actresses who appeared in such films are Linda Lin Dai and Cheng Pei-Pei, who later became famous as Shaw’s resident “butt-kicking babe” in female warrior films. In fact, she was established as such in one of Hu’s popular successes as a solo director, the landmark Come Drink With Me (1965), a film that virtually coined such conventions as drunken heroes and knockdown drag-out fights inside inns. Modern viewers will be more familiar with such homages as Ang Lee’s Crouching Tiger, Hidden Dragon (2000), starring the same Cheng Pei-Pei. 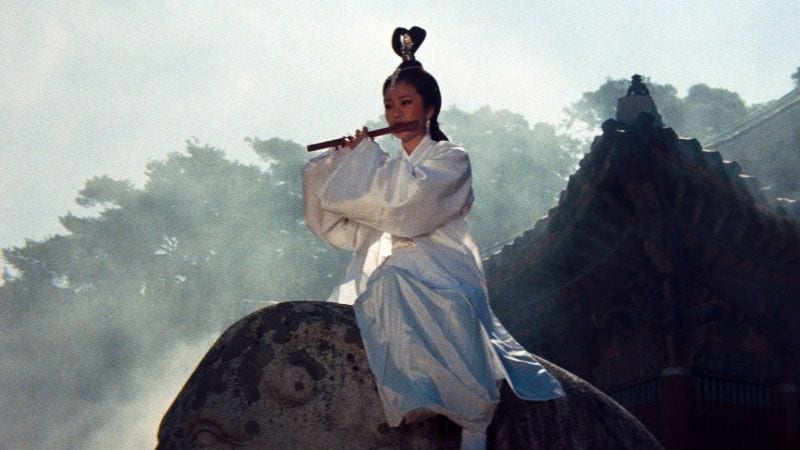 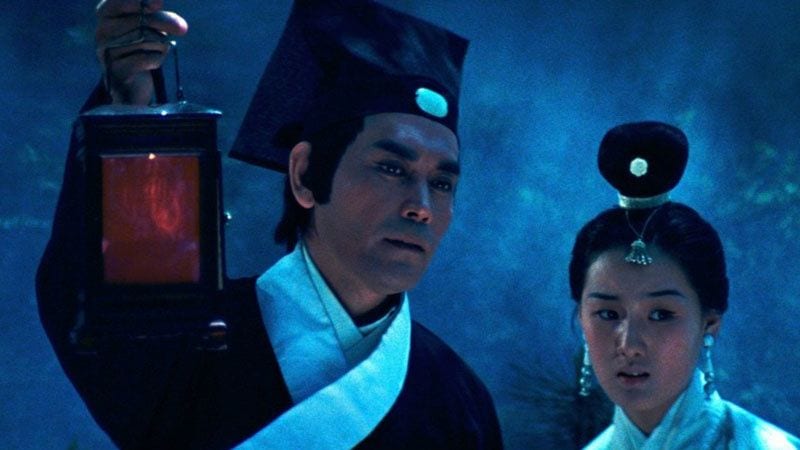 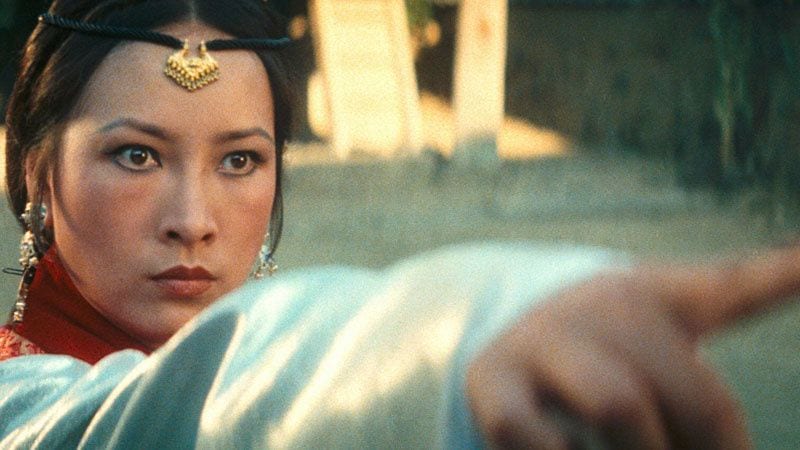 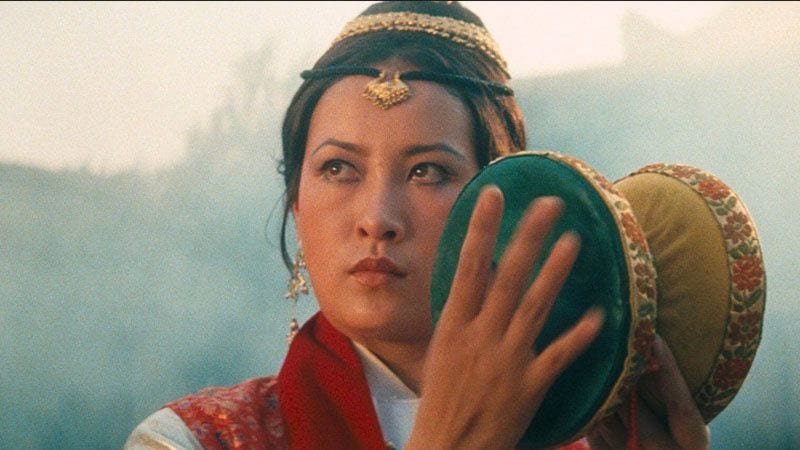 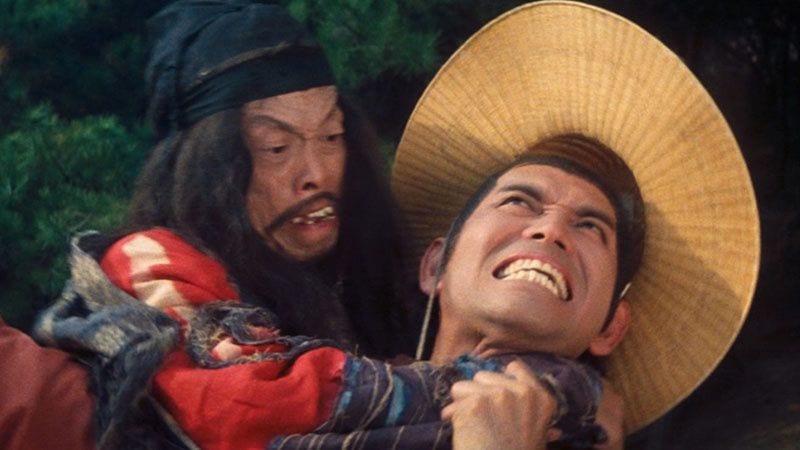 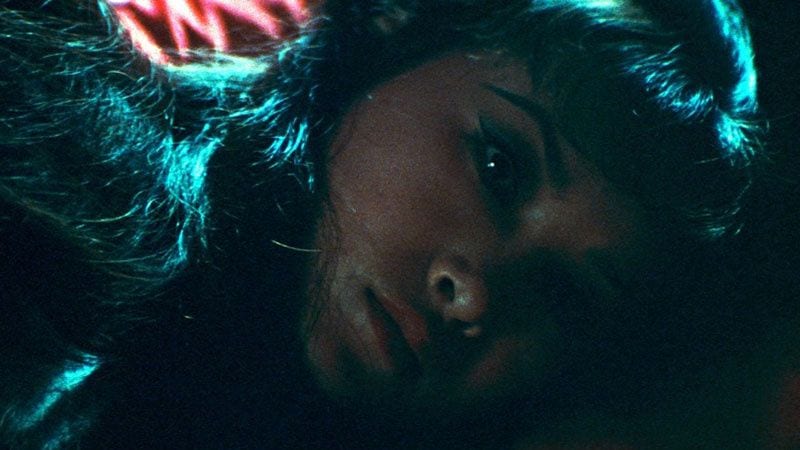 After Hu left Shaw Brothers to work in Taiwan, his first accomplishment was one of the decade’s biggest hits, Dragon Gate Inn (1966), scheduled for July Blu-ray release from Criterion. Unfortunately, as Hu’s projects became more elaborate and historically demanding and increasingly epic in scope, they suffered at the box office and in terms of re-editing and truncation. Such a fate befell A Touch of Zen, whose tribulations we mention here. Legend of the Mountain is now the second of his late-period films to grace us with a restoration, and in fact this complete version was never released commercially.

It’s one of two movies shot back-to-back in Korea as a co-production deal, the first being Raining in the Mountains, which we dearly hope will surface soon. Legend of the Mountain, scripted by Hu’s wife Chung Ling from one of Pu Songling’s ghost stories, follows the adventures of Ho, yet another of Hu’s favored naive scholar-heroes. He’s played by Shih Chun in almost a reprise of his role in A Touch of Zen. Once again, our bumbling scholar falls in with women much stronger and smarter than himself and much more responsible for driving the plot.

In this case, there are two women of equal mystery, one bad and one good, each accomplished musicians and each accompanied by a mother. The baddie is Melody (Hsu Feng, the warrior-heroine of A Touch of Zen ), whom Ho “marries” without benefit of formal ceremony. The goodie is Cloud, played by Sylvia Chang, who became a prominent filmmaker in her own right.

There’s no point in describing the vague, elusive, incremental plot that slowly builds among ten or a dozen characters around an abandoned fort, leading to several flashbacks and big magical battles where rival forces try to demolish each other by beating drums and conjuring colored smoke.

The smoke is a canny symbolic motif as well as a decoration, and we should add that Hu is the production designer and co-editor of this film as well as its director. Although more complicated than usual, the story is the basic scholar/ghost plot. What matters is Hu’s confident visual elaborations, his sense of atmosphere and rhythm, and the combination of painting and musicality he brings to this narrative puff of smoke.

The key adjective for this movie is “beautiful”. Like its bewitching women, the sheer physical power of Hu’s technique is what seduces the viewer. Perhaps some nagging little rational neuron in our brain knows better, but we don’t care. Like our hapless scholar, we’re too bedazzled to resist.

The story doesn’t end on the cosmic level of A Touch of Zen, which is practically the 2001: A Space Odyssey of martial arts movies. Still, its final images of Buddhist monks, harking back to Raining in the Mountains, provides its own level of transcendence, as though the final destination of Ho’s journey had always been a moment of inner harmony between the yin and yang of those spiritual forces vying for his body and soul.