Auto-ethnography has been described as “both process and product”; “an approach to [cultural] research and writing that seeks to describe and systematically analyze personal experience in order to understand cultural experience.”

A rogue child of the post-modern turn, autoethnography is perhaps more easily described as the place in ethnographic research where art meets science (and emerges triumphant); where the literary supplants the scientific and the creative overwhelms the analytic, the better to explain it (whatever it should happen to be) to the reader. Positivists frown upon it: there’s no systematic analysis; no theory; what distinguishes it from mere storytelling? More extreme post-modernists frown upon it too from the opposite perspective, arguing that it’s positivism in autobiographical disguise, wherein the author subtly steers the reader toward certain authoritative conclusions, masquerading as self-exploration. In their critical reflection on the method, Jackson and Mazzei steer against the perception of autoethnography as simple first-person storytelling, posing instead a more provocative inquiry:

“…What would happen if autoethnography were to disrupt identity, discourage identification, and refuse understanding? If subjects, in their telling of experience, become fractured, multiply-positioned, and unreliable narrators, then autoethnography would need to forfeit authority and embrace (not merely question) epistemological failure…” — Experience and “I” in Autoethnography: A Deconstruction, International Review of Qualitative Research 2008)

Little did they know, perhaps, their question would be answered so profoundly by a rising Japanese manga author.

Nagati Kabi was propelled to Internet pop culture stardom and manga literary success with her debut book My Lesbian Experience With Loneliness (Seven Seas, 2017). That book chronicled, in autobiographical manga form, her desperately unsuccessful efforts to obtain and hold down a job, move out from her parents’ home, experience a romantic relationship, assert control over mental illness, and succeed at being a manga artist. There’s a reason writers are urged to “write what you know”; Kabi poured her most personal fears, failures, and dashed hopes out onto the page and it was a smash, bestselling success.

Perhaps as a result of the title, My Lesbian Experience With Loneliness has been most associated with its discussion of Kabi’s experience with a lesbian escort agency. But (as Kabi complains in her latest volume), that wasn’t even the main point of the previous book, and a lot of readers misinterpreted her intentions. What she means, I think, is she was trying neither to provoke nor titillate, nor even challenge convention, with her deeply personal manga about lesbian sex work. Rather, her focus was on loneliness; on the way in which all of the alienating social pressures of family and society intersect and exacerbate each other. Her desire for sexual intimacy, which led eventually to an encounter with a lesbian sex worker, was only one aspect of her broader struggle with loneliness.

Kabi picks up almost exactly where My Lesbian Experience With Loneliness left off. She’s still living at home, only now trying to deal with the runaway success of her previous work. She’s afraid to show it to her parents, with whom she lives. She’s also afraid she won’t be able to match her previous success. In each of the diary entries (there are 12 in this collection), she chronicles the struggles she faced in the months that followed, and each diary entry tackles particular themes. Her relationship with her mother goes through multiple phases. She’s frustrated by her, but yearns for her love and feels a sense of responsibility for her, especially in the face of a distant and unsupportive father/husband. She moves out on her own, but pressure, stress and obligation bring her back home. Throughout the manga, she struggles to achieve a final break with her mother, and it finally comes with the realization that the selfless and undemanding mother-love she yearned for since childhood is unattainable. There’s a poignancy here, but also a ruthlessly incisive self-study that would put Freud to shame. 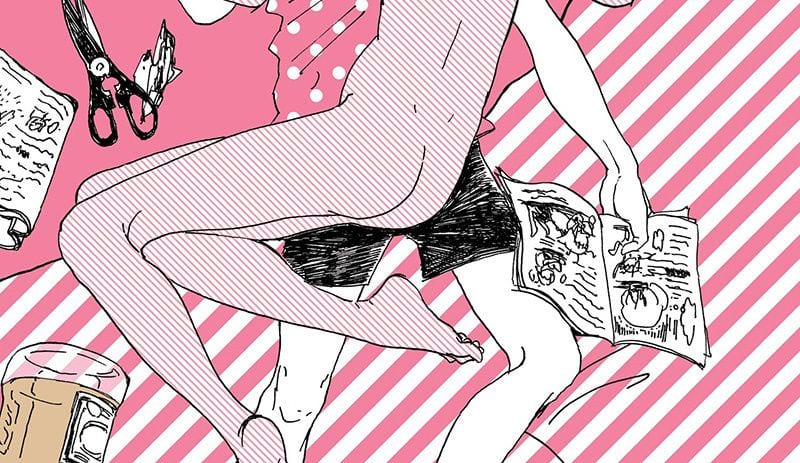 Her efforts to move out on her own, to pay her bills, to deal with the crushing sense of anxiety that’s proven such a barrier in personal relationships are chronicled with a sense of bemused, wry self-criticism, but also with tremendous honesty. The art she uses to dramatize all this is in the most exaggerated manga style possible, lending a light-hearted sense of play and flow to the pieces, yet her use of narrative structure and self-reflection results in a truly profound series of philosophical interventions.

Most remarkable perhaps is her analysis of her own obsession with social media, and with how she is perceived on social media. It’s “the forbidden door” which most of us open at various points: searching for ourselves online to see whether and how we are discussed and understood by others. As a newly famous manga writer publishing on controversial subjects (especially in Japan) like mental health, homosexuality and sex work, there is, needless to say, a lot that people have to say about her. And she thrills once she discovers they’re not discussing only her work, but more importantly her life.

She makes the mistake of engaging with some of them, and then comes to find her social media persona—which has hitherto comprised almost the entirety of her social relationships—thrown into disarray by a new-found fear over how her comments will be taken by her readers; something she never worried about before she became famous, and before her social media feeds became a key component in her professional success. How do we respond when the most personal method of self-expression we have suddenly becomes part of our professional identity?

She breaks down the complex threads of this process masterfully, interrogating the feeback loops (quite literally) and circular fears she experiences over the ways in which social media reactions have come to control the only thing she used to feel a sense of control over: social media. She also reflects, in this process, on the fact she achieved success without ever having developed, or been taught to develop, any sort of means for measuring personal success; the result is her inability to appreciate her own achievements.

What’s impressive is that with such sparing dialogue, Kabi manages to combine art and narrative to delve so deeply into the complex processes that shape our reflexive selves. She understands herself profoundly, but struggles – as do we all – with the fact that self-knowledge does not help her to control or change the behaviours she dislikes in her own self.

If academic prose auto-ethnographies are sometimes criticized for hypocritically assuming an authorial pose of authority in a writing form which is supposed to be self-critical, Kabi has stumbled onto the fact that presenting auto-ethnography in manga form affords the writer an ability to knock down authorial pre-eminence a few pegs through self-critical artwork. It’s an amazing combination: the art makes us laugh, retain a deep sense of fondness for the author as a quirky human being and also empathize with the profound depth of emotion she feels, freeing Kabi from the trap of narrative authority and allowing her to write convincingly profound analytic thoughts that resonate deeply with the reader.

My Solo Exchange Diary also permits competing perspectives in a way prose auto-ethnography would struggle with. The diary entries are composed as letters to herself (her present self, her past self, her future self), setting the stage for a dialogical engagement between Kabi’s multiple and fractured selves. Yet the artistic element – the images of Kabi enacting the very things she writes about in the first-person – inserts a third-person narrative into the text. By engaging multiple vantage points, and multiple selves, she is able to engage herself dialogically in both the first and third person simultaneously; a truly remarkable accomplishment, particularly when applied to auto-ethnography.

My Solo Exchange Diary is a surprisingly profound read; it’s also tremendously uplifting fun. It offers an astute and perceptive analysis of the alienated self in the digital era of precarious work, and offers a self-critical, analytically reflexive auto-ethnography on a scale that any professional anthropologist would be envious of. Far from running out of material, or duplicating her debut success, Kabi has proven herself as an original, brilliant thinker who is capable of pushing manga to new and intellectually provocative heights.