If you’re Catholic, you’re almost certainly familiar with holy cards. For the rest of you, a holy card is a devotional picture about the size of a playing card, typically featuring an image of a saint on one side and a prayer or biography of the saint on the opposite side. Prayer cards are created using techniques that lend themselves to mass production, such as woodcuts and engravings in earlier times (the oldest known prayer card, a woodcut of St. Christopher, dates to 1423) and color lithography today. Inexpensive and often visually striking, prayer cards form an important part of the folklore and popular culture associated with the Catholic religion.

The Boston-based artist Ria Brodell offers a new take on prayer cards in Butch Heroes, which features 28 portraits and brief biographies of individuals and couples who, in her own words, “were assigned female at birth, had documented relationships with women, and whose gender presentation was more masculine than feminine.” Brodell’s choice to model the portraits of these gender-nonconforming individuals on that of saints of the Catholic Church is deliberately transgressive, as the Church has been notoriously intolerant of any deviation from a narrow definition of sexuality and sexual behavior. On the other hand, her choice also makes perfect sense, because becoming a priest, monk, or nun has long offered individuals an alternative to heterosexual marriage. So, while it’s unlikely that you will ever come across an acknowledged gay, lesbian, or transgender person featured on an official holy card, it’s quite possible that some individuals thus pictured snuck in under the radar, so to speak.

True to the tradition of holy cards, each painting centers on an image of the featured individual or couple, but also includes details of symbolic significance, such as a location or objects that held particular significance in the live(s) of the subject(s). The style of the paintings recalls the chromolithography of modern holy cards, using bright, contrasting colors and bold designs to catch the viewer’s attention, while including the name(s) and date(s) associated with the subject(s) in a flowing while banner reminiscent of those used to contain incorporate text into Renaissance paintings.

The earliest person featured in Butch Heroes is Katherina Hetzeldorfer, who was executed in Germany in 1477 for a crime that literally had no name at the time—having a sexual relationship with an individual of the same sex. Reports from her trial would not be out of place in a scandal sheet today, from the physical description of the accused (“like a man in both physique and behavior, a sexually aggressive character and a potent lover”) to the description of the “instrument” (which sounds like a dildo made of leather, cotton, and wood) she used on her lover, a woman she had originally claimed was her sister. Hetzeldorfer’s punishment was death by drowning, which is illustrated in her portrait by showing her underwater, bound with ropes attached to a large stone. She is dressed like a male peasant, in loose tunic and hose, and appears both massive and defiant, looking directly at the viewer while embracing the stone that was the instrument of her death.

Brodell includes portraits of individuals of varying races, ethnicities, and social stations as well as of different time periods. Clara, a.k.a. “Big Ben”, was an African American woman who lived in New York City and was known to dress in men’s clothing and to show “attention to other women”. She made the news in 1927 when two other women, each apparently jealous of the attention Ben paid to the other, got into a fight at a rent party. It ended tragically, with one woman killing the other with a cut to her throat. Ben is pictured wearing workmen’s clothing against a backdrop of brick buildings and that perennial symbol of both the tenements and of women’s work, laundry strung on lines stretching between adjacent buildings.

Sakuma Hideka and Chiyoka were involved in a polyamorous relationship with another woman in Tokyo in the ’30s. Knowing that they would never be accepted in their society, Hideka and Chiyoka planned to commit shinju, or double suicide, by leaping into the crater of an active volcano, Mount Mihara. The third woman also planned to commit suicide, but left notes for her family which led to Hideka and Chiyoka being stopped before completing their intentions. Hideka wrote an account of the incident, in which she criticized the press for mocking their love, and wondered why “self-sufficient women in love could not live together just as heterosexual couples did.” Hideka and Chiyoka are showed in Western dress, embracing, with the smoke of the volcano rising up at their feet. 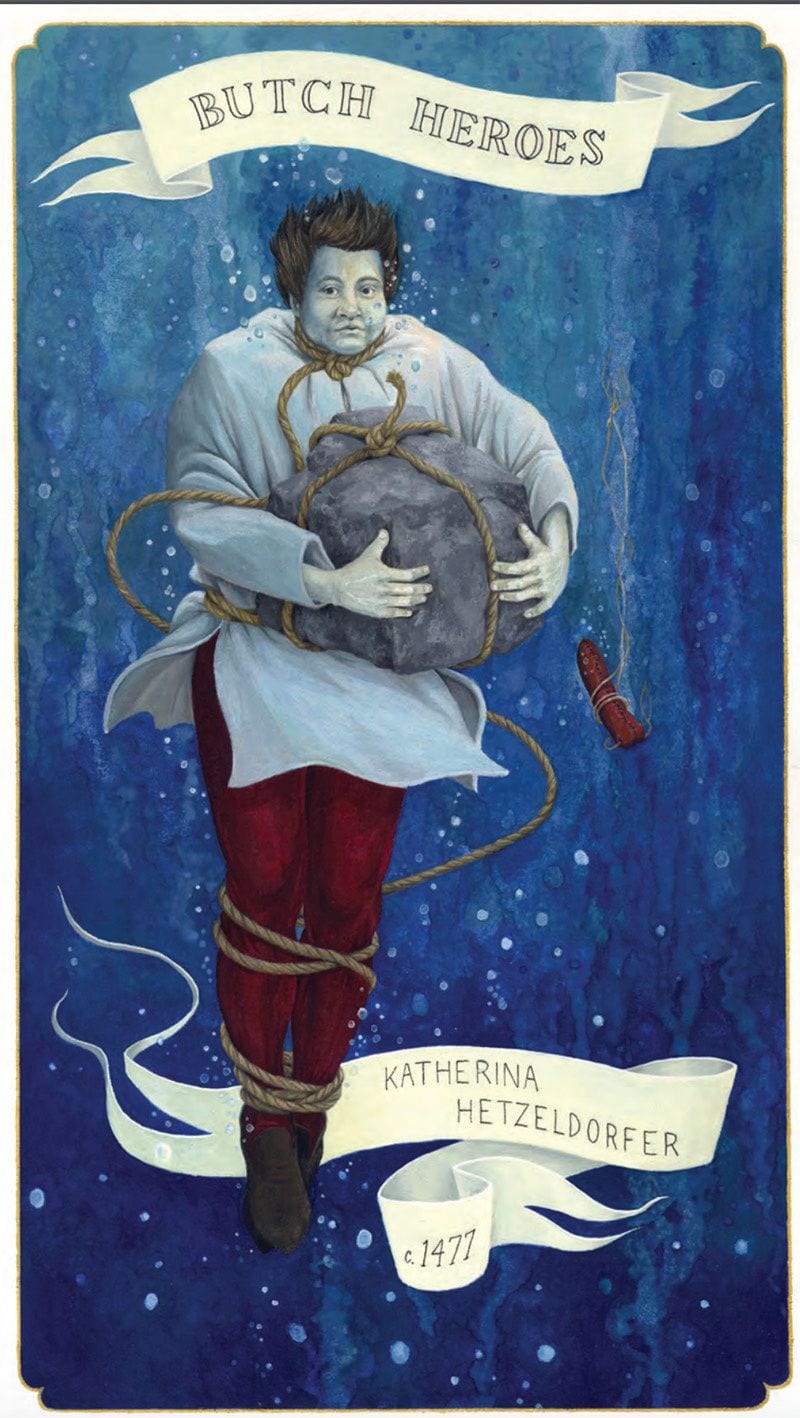 Other subjects include Carl Lapp, a Sami who died in 1694; Charles/Mary Hamilton, who in 1746 in England was accused of pretending to be a man in order to get a woman to marry her; Sitting in the Water Grizzly, a Native American who was accepted as a man by the Ktunaxa Nation; and Petra “Pedro” Ruiz, who enlisted as a man in the Mexican Army in 1913. You can learn a lot about GLBT history just by reading the text included, but if you wish to follow up with your own research, Brodell includes endnotes and a bibliography of sources about each subject.

Butch Heroes is beautifully designed, with a gold-embossed cover suggesting a photo album and inclusion of a gold ribbon placeholder of the type one often finds in presentation Bibles. Each subject is allotted a double page spread, with text on the verso and the painting on the recto, a format that encourages browsing. 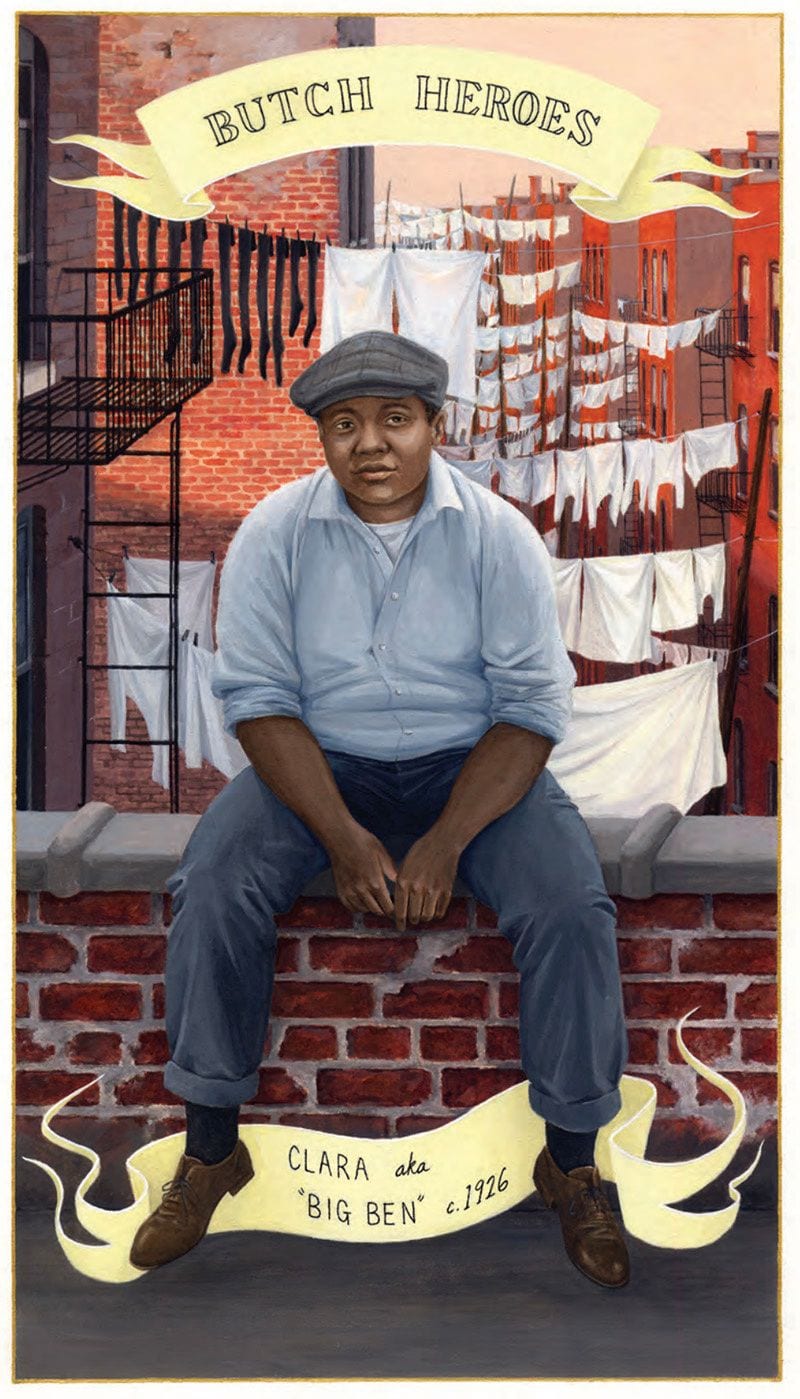