In Yorgos Lanthimos’ The Favourite (2018), history is not treated casually, but more as a malleable metal that can be manipulated into a given shape. Interviewed for the DVD supplementary feature The Favourite: Unstitching the Costume Drama, Lanthimos explains, “We were inspired by real people and parts of history, but we completely reimagined everything.” Meanwhile, co-writer and producer Deborah Davis’s words iterate less of a desire to reimagine, and more of a dictatorial approach. “I think history can really slow you down and we didn’t want to tell the history of this period, we wanted to tell this story about these three women,” she explains. “So the history sort of came along for the ride, and where it was useful to us it stayed, and where it wasn’t useful to us we sort of let it go.”

In 18th-century England, Lady Sarah (Rachel Weisz) governs for her close childhood friend, the ill, frail and short-tempered Queen Anne (Olivia Colman). When new servant Abigail (Emma Stone) arrives, she is taken under her cousin Sarah’s wing, but her ambitions to return to her aristocratic roots provokes a rivalry for the Queen’s favouritism.

Cinema has the potential to forge cultural and historical perspectives that, in the less curious spectator, leaves the truth buried or distorted. While the act of reimagining history is Lanthimos, Davis and co-writer Tony McNamara’s prerogative, it inherently will cast a permanent impression of these three women of history in the minds of the audience. One should ask whether there is any harm should Olivia Colman come to mind when we first hear this monarch’s name?

Regardless of the answer, we should be attentive to the way we see, think, or associate through cinema, and more specifically on the issue of the appropriation of identity – in this case of real or once living persons through art. But then, are we not a culture of appropriation? One need only think of cinematic adaptations of literary works, or of foreign language film appropriated by English language cinema. With this in mind, should it be surprising that we even appropriate our own history? 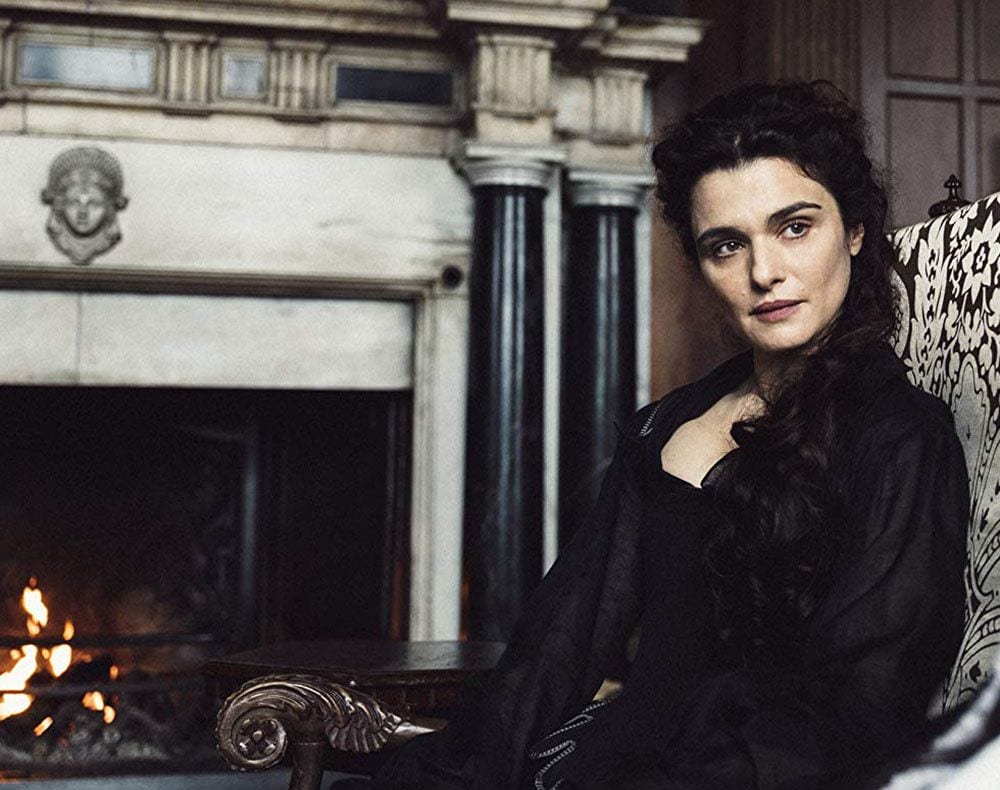 The Favourite leaves the viewer with a lingering question – why not use these characters and the historical events as a basis for a fictional history, with the names changed? On one level it is a disingenuous piece of filmmaking that, while captivating, takes liberties with the real persons and parts of history. This infers a lack of courage, of not letting go as Davis suggests, not even a mutual holding of hands. Rather, the storytellers are holding the hand of history, if you will, out of a fear of finding themselves lost.

An inherent characteristic of the period drama is the look and feel of the time, which is a character in and of itself. Yet Lanthimos and cinematographer Robbie Ryan’s deliberate use of the camera, specifically the recurring and distorting fish-eye lens, reinforces this impression of not only being at play with history, but peering into the past to create Art. Further still, the insertion of inter-titles structures the film as a series of chapters that ensures the authorial presence is a recurring one, and certain music melodies that are seemingly strategically placed to emphasise the drama only deepens the awareness of the storytellers being at play. This inherently creates an interesting juxtaposition, in which our experience of the film functions on two parallel levels: an emotional suspension of belief opposite a cognitive self-awareness.

The effectiveness of The Favourite is the conflict it sparks between these two, specifically our emotional sympathy and cognitive reasoning. An important moment sees Lucy remark to Abigail of her willingness to see her husband fall on the frontline of a war she supports politically. In keeping with her sentiment, a lesson to her younger cousin, each woman in their rivalry for the Queen’s favouritism must accept the risk of disaster. It is not a condition we the audience necessarily accept, either as emotional witnesses or participants of the drama. If court favour changes like the wind as the leader of the political opposition, Harley (Nicholas Hoult) warns Abigail, then so do our spectatorial sympathies.

Our understanding of narrative language is underwritten with an adversarial impulsivity, constructed around two archetypes: the protagonist and the antagonist. Just as Sarah refuses Abigail’s truce once the latter has regained her aristocratic status through a cunning ploy, we refuse to see them both as flawed. Rather, our sympathy switches from Abigail to Sarah, as our ability to reason a disappointment in the imperfection of the two women is impaired by our emotional impulses. Playfully if not cunningly, an intimate and genuine warmth and vulnerability begins to be revealed beneath Sarah’s seemingly harsh exterior. 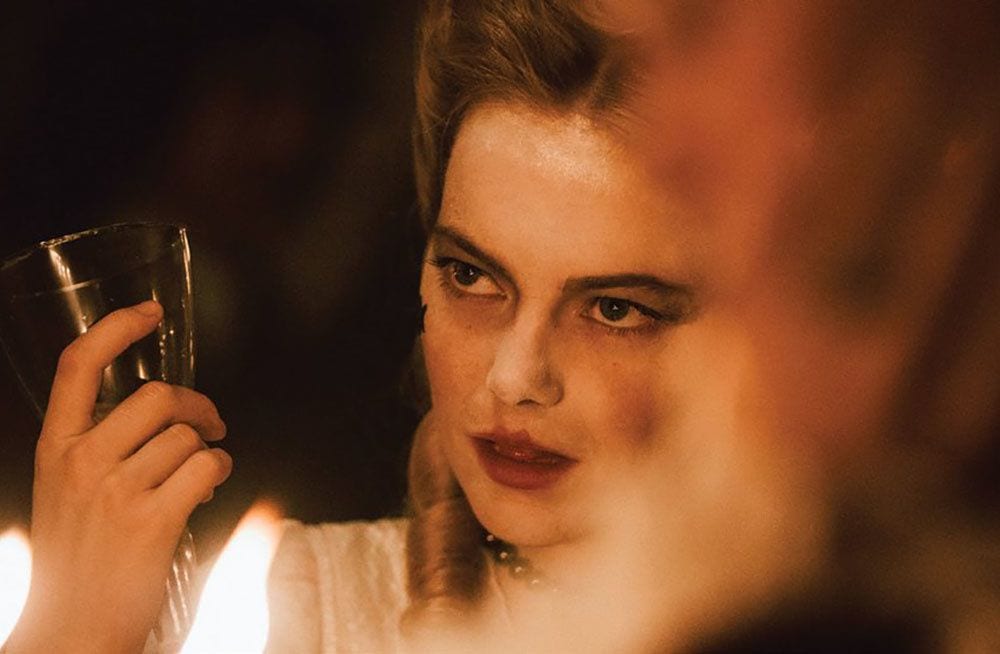 Meanwhile, beneath Abigail’s vulnerability and adamance of not losing her ladylike qualities are revealed harsher instincts, but also a naïvety as to the Machiavellian games, both in winning favouritism and its reality. Both Sarah and Abigail are studies of narcissism, and what complicates or muddies the perspective of their drama is that in essence we retreat from cruelty and from those with the greater propensity to hurt, which underlies The Favourite as an emotionally and intellectually satisfying experience.

Colman, Weisz and Stone are perfectly cast, playing off one another with a melodic perfection. While in the drama Weisz and Stone orbit around Anne’s gravitational pull as monarch, in the experience of the film Colman and Stone orbit Weisz. It offers a series of confirmations about the actors – Colman and Weisz’s status as leading English actors, and for Stone a diversity to her onscreen persona that confirms her status as a leading American actor.

Credit to the impression these actors make, however, must be attributed in part to the writing, which controls the extent to which the characters reveal themselves, either verbally or through action. Davis and McNamara do not overwrite, preserving an emotional communication in which we discern through the unspoken. This is hinted at subtlety, for example, in a moment when Sarah remarks to Abigail, “You think you’ve won.” It is a telling line, but one that is emphasised through observation of actions that requires the audience to feel it in order to receive the intent of the storyteller’s voice. There is something beautiful or pleasing in filmmaking when moments are set up so that no words need be exchanged, yet we subtly feel that moment. We sense within ourselves, emotionally and mentally, how it speaks to the themes and ideas, or the interpersonal dynamics of the film, which then gives the performances a longevity – a mystery, or distance wherein we feel more drawn to the characters because they remain partly concealed from us.

Stylistically risqué, The Favourite relates to a certain type of subversive British cinema from filmmakers such as Peter Greenaway, although it is not an imitation. Nor is it overtly sexually provocative. Indeed, it is provocative through language more than its few tame scenes of sex and nudity. In these politically-charged Brexit days, as Britain risks alienating Europe and deepening the Americanisation of our culture (which is the more significant threat to our independence), a British period piece directed by a Greek filmmaker with shades of subversive British filmmaking tradition makes a statement. Whether intentional or not, The Favourite lends itself as a means of bringing us closer to European art house cinema and our cultural ties with the continent, in a period when the Right seeks to alienate and promote individualism in response to the European community.

The Favourite is available now on Digital Download, Blu-ray, DVD and VOD.