Jacqueline Audry’s lovingly restored Olivia (1951), arriving on Blu-ray from Icarus Films, is several pleasant surprises at once. For many viewers, this will be the introduction to a neglected French woman filmmaker of the post-WWII period, and also a pioneering filmmaker on lesbian themes. Apart from this social and historical relevance, the film conjures its own world, out of time and period, that casts an almost magical spell on the viewer 70 years later.

The story takes place at an isolated rural boarding school in an era of horse-drawn carriages. Olivia (Marie-Claire Olivia) arrives as a new girl, dazzled by the grand layout in which she gets her own lavishly appointed room fit for a princess. There are classes, more or less, but it’s a most relaxed and unregimented school, with everyone free to wander the forest or gossip in corners. One student is followed everywhere by her St. Bernard. The hall is dominated by a curving staircase and balcony that the camera loves to pan over. Here Audry takes advantage of the black and white photography of Christian Matras, who worked with the similarly pan-happy Max Ophuls, whom Audry assisted.

Two mistresses run the school, clearly for girls whose parents have money. Mademoiselle Julie (Edwige Feuillère) is the epitome of elegance and grace, dispensing favors and compliments with a free hand. Mademoiselle Cara (Simone Simon) is pettish and ailing, forever lying down with migraines and refusing to eat. It’s quickly yet discreetly established that they are lovers, and that Cara is devoured with jealousy over Julie’s attentions to others and theirs to her. The students’ loyalties tend to settle with one party or the other, creating a kind of bifurcated school. 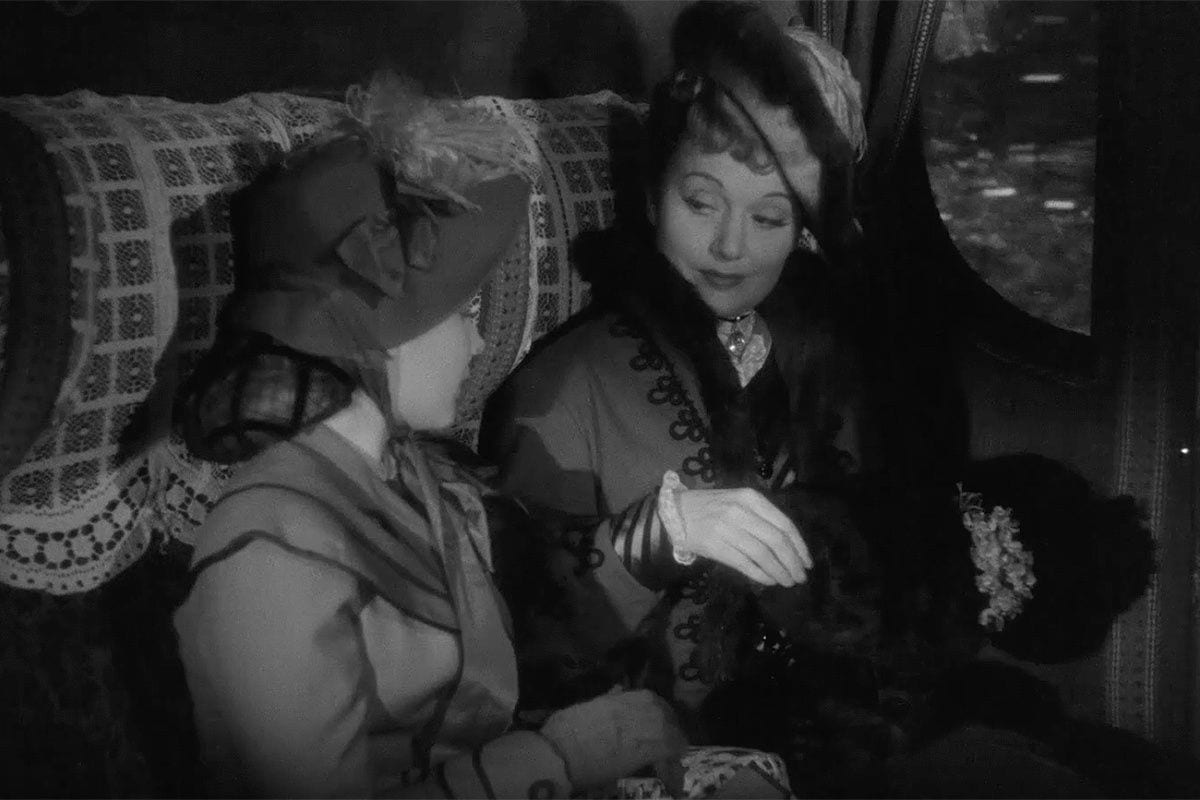 Although Cara initially baits Olivia’s attention, Olivia quickly falls for the dazzling Julie, who takes her on art tours where Olivia pays more attention to Julie than to Watteau. The girls are spellbound by Julie’s readings in rhyming literature by Racine and Hugo, which scenes contribute to this film’s literary, elevated quality as well as its dreamy, unreal insularity. The fantasy atmosphere reaches its height during the Christmas masquerade as the girls dance with each other in costume.

The elevated world of art is also represented by a reproduction of the statue of Winged Victory of Samothrace in Julie’s study, and a parallel is drawn between this “Victoire” and the school’s cook of the same name. This may be an in-joke, for in the bonus interview with the director, Audry mentions receiving the now-extinct “Victoire” statuette for an early film.

Also populating the scene are the wise old cook (Yvonne de Bray), the fretful math teacher (Suzanne Dehelly) who wishes only to eat and says math does nobody any good, the German teacher (Lesly Meynard) who silently serves Cara, the Italian teacher (Rina Rhéty) who loves Julie, an English student (Tania Soucault) who becomes Olivia’s friend, Danièle Delorme (star of Audry’s Colette trilogy) in an uncredited cameo as a former student, and the whole corps of be-frilled and swanlike students.

Insofar as Olivia ever generates a plot before a brief outburst of melodrama in the last reel, it gathers to a pitch on Olivia’s love or worship of Julie. To what extent does this love have a physical element? The film is so discreet on this point as to seem almost mystical. A couple of moments make it clear that Julie feels physical desires and acts on them. At one point, she tells Olivia she’ll come to her later that night but then never shows up. 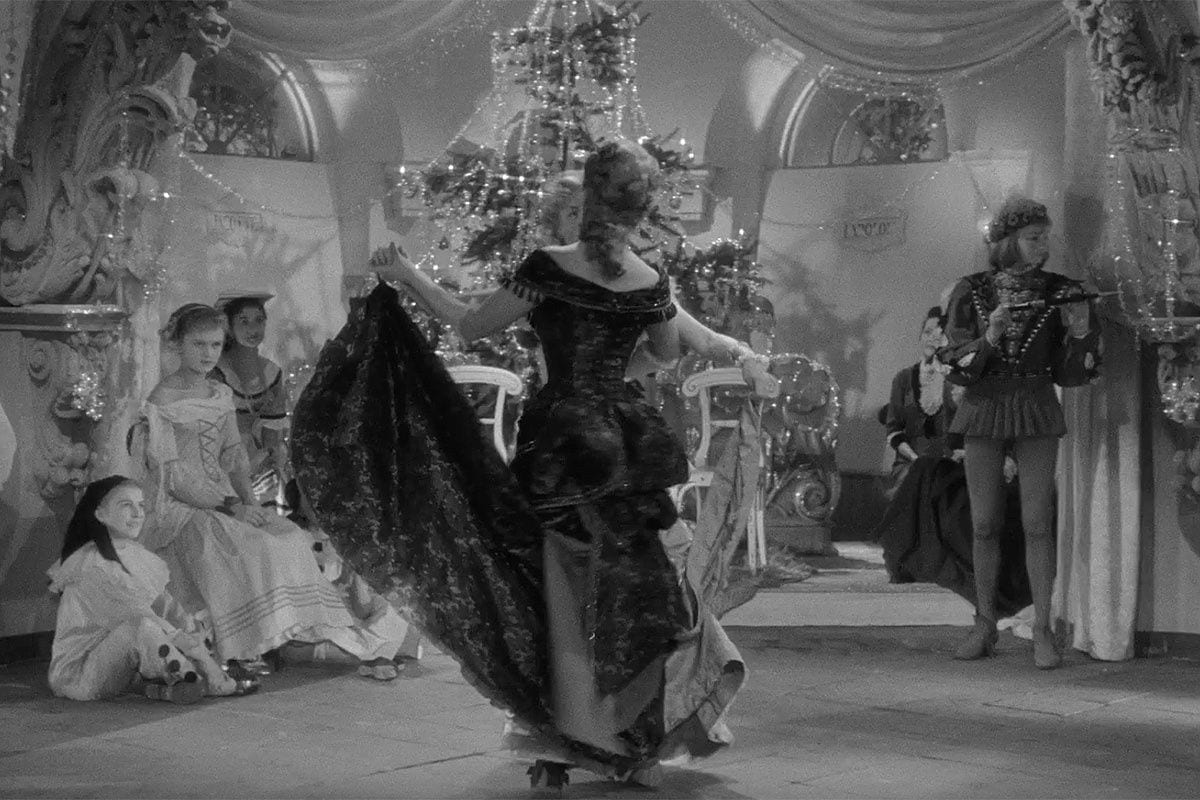 When the film was made and set, this was wrong because lesbianism was considered wrong. Today, it’s wrong because of crossing the line between teacher and student. The world always has a reason why sex is wrong, so perhaps the film’s most subversive element is refusing to condemn in its portrait of a young woman’s sometimes painful maturation. The opening statement finds the alleged author declaring that she defends love.

That author, billed under the name “Olivia” for the novel Olivia (1949), was English writer Dorothy Bussy, perhaps most widely read as the translator of André Gide. This restoration of the film released in France in 1951 runs 96 minutes, while IMDB indicates a 1954 released in the US as The Pit of Loneliness, apparently to remind viewers of Radclyffe Hall’s scandalous 1928 novel, The Well of Loneliness. The retitling promises a picture much more dreary and moral than it actually is. Wikipedia’s entry for this film lists it at 88 minutes, which might have been the US running time, implying that much was cut.

IMDB includes a tagline: “COLETTE’S masterful screen drama … the offbeat story of a strange relationship…condemned by the world … acknowledged only in fanciful dreams … DISCUSSED ONLY IN WHISPERS!” (Or in all caps.) This is confusing, because although Audry was known for adapting Colette’s works to the screen, this isn’t one of them, Gowever, the adaptation was written by the filmmaker’s sister, who happens to be named Colette Audry. Jaqueline’s husband, Pierre Laroche, wrote the dialogue, as he commonly did for his wife’s films. The French trailer, which features a romantic ballad unheard in the film (and just as well), makes a point of declaring that the movie is conceived and made by women.

Jacqueline Audry, who is briefly interviewed in an archival extra, had a fascinating “against the grain” career that warrants further excavation. Wikipedia states that her debut film was heavily censored and no longer exists in complete form. I became aware of her after stumbling on her excellent 1954 film of Jean-Paul Sartre’s play No Exit (Huit Clos) on YouTube; this too has a lesbian character.

Audry’s films were literary adaptations and often costume pictures. As such, they fall into the French tradition of “cinema of quality” so derided by Francois Truffaut and other upstarts of Cahiers du Cinema, who yearned for personal films about France today. They thought these poised and lacquered adaptations were draining French commercial cinema of vitality. Well, Audry clearly has a personal thematic consistency and she struggled uphill to realize it, so she shouldn’t be thrown out with the bathwater of “quality”. In general, the “cinema of quality” strand in postwar French cinema deserves re-evaluation, and perhaps Audry’s a good entry point.

IMDB credits her as director of 16 items, including at least two movies about women who dress as men: La Garconne (1957) and Le secret du Chevalier d’Éon (1959). She also did a 13-episode TV series, Le Bonheur conjugale (“Conjugal Happiness”, 1965). French Wikipedia digs out two later works unknown to IMDB, for a total of 18, including a 1973 mini-series about Balzac.

For now, we have Olivia, which belongs to a fascinating strand of more or less surreal visions of girls’ boarding schools. It feels like a direct link between Leontine Sagan’s Mädchen in Uniform (1931, a great film still very hard to see) and Radley Metzger’s Therese and Isabelle (1968), and could be programmed on a retrospective with Ida Lupino’s The Trouble with Angels (1966), Ronald Neame’s The Prime of Miss Jean Brodie (1969), Peter Weir’s Picnic at Hanging Rock (1975), Léa Pool’s Lost and Delirious (2001), Lucile Hadžihalilović’s Innocence (2004), Jordan Scott’s Cracks (2009), Mary Harron’s The Moth Diaries (2011) and the English St. Trinian’s series.