The status of John O’Hara in the pantheon of great American authors seems to be disguised in a haze of under-appreciation. In other words, most of us will just as soon overlook the impressive work he produced in his relatively brief lifetime (1905-70) in favor of those whose writing blossomed a generation prior to his (F. Scott Fitzgerald, Ernest Hemingway) and those whose work defined the mid-20th century generation (Norman Mailer, Saul Bellow, and Graham Greene.) There were others sprinkled in the earlier and later generations, and if O’Hara’s reputation suffers its probably due to Daniel Mann’s overblown film adaptation of Butterfield 8 (1960) and the braggadocio musical, Rodgers and Hart’s Pal Joey (1940). Good writing can be hard to find if it’s buried beneath the respective Hollywood sexual posturing of Elizabeth Taylor and Frank Sinatra. Iconic as they surely were in Mann’s film, when the image overcomes the narrative, the former usually wins.

It isn’t that O’Hara’s reputation wasn’t well deserved. He became a bestselling novelist before the age of 30 with his debut,
Appointment in Samarra (1934), an intense novel covering the final tragic three days in the life of hero Julian English. Consider its opening scene, a married couple waking together in bed on Christmas morning:

This isn’t exactly sensational, but it gives us a good idea of where the story will go. We don’t meet our primary hero, Julian English, until the next section, and even then it’s only through the thoughts of a colleague’s wife. We see English from a distance and we understand his marital situation is difficult. O’Hara’s omniscient narrator makes sure we are distanced from the details of English’s indiscretions. The details are not exposed. Julian fantasizes about throwing a drink in another man’s face (the action that starts the cascade that will end in tragedy) but our attention is diverted until suddenly an incidental character exclaims that the drink has indeed been thrown. It’s this distance that can throw off the modern reader expecting a more direct approach, but it’s effective for its time. When handled tactfully, both sex and violence in literature of the ’30s can have a deeper effect if expressed from a distance.

It’s the suicidal daydreams Julian experiences, however, that will most strongly resonate with the reader. O’Hara puts a gun in his hero’s mouth and visions of his wife’s potential indiscretions in his mind:

“… ‘By God, no one else will have her in bed,’ he said, to the empty office. And immediately began the worst fear he had ever known…sometime she would open herself to another man and close herself around him. Oh, if she did that it would be forever.” 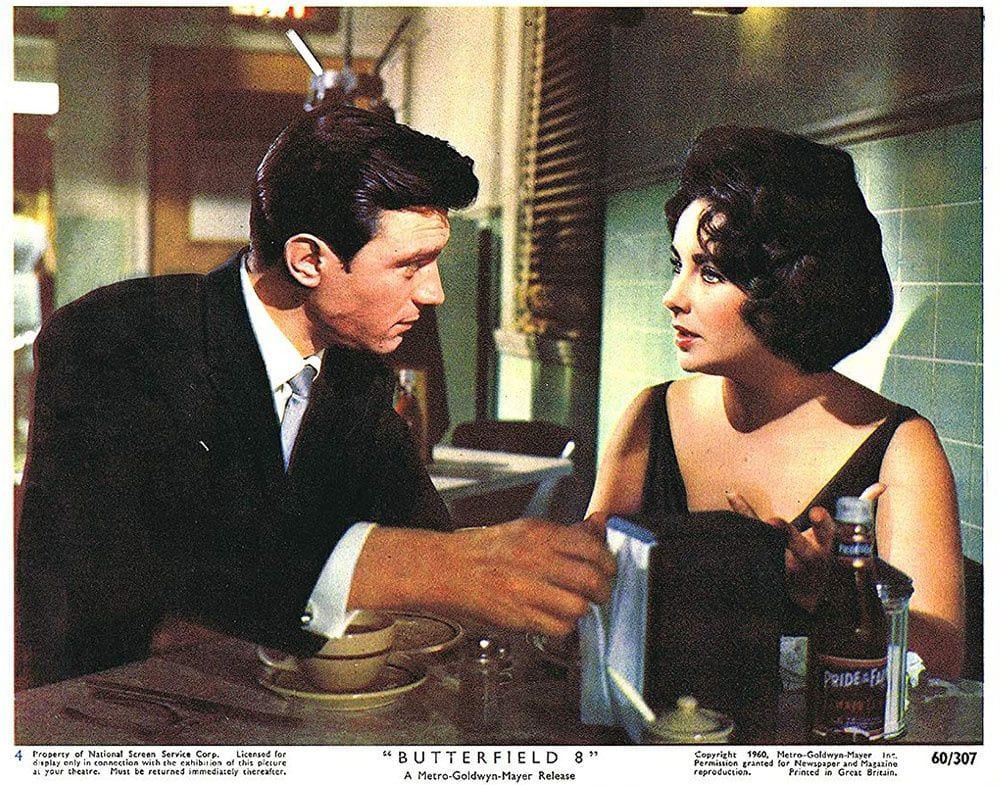 The problem with a 1934 novel about a man spiraling down to meet an ending of his own making is that most of us have seen this before and we’re not easily moved. It’s unavoidable for the contemporary reader to get distracted by the clarity and smoothness with which he executes the technique. Naturalism in American literature was done earlier (and better) by writers like Frank Norris (McTeague, The Octopus, among other titles.) What resonates most with the reader now is the sexuality:

“She was wearing a dress that was cut in front so he could all but see her belly-button…the material…held close to her body…She saw him looking-he couldn’t help looking. And she smiled.”

As bodice-rippers and sensational vulgar novels, the reader of 1935 probably could not have done better than Butterfield 8. Here, O’Hara worked in the “ripped from the headlines” mode, crafting a story loosely based on the life and death of a 1920’s flapper named Starr Faithfull. O’Hara’s heroine is named Gloria Wandrous, and she’s connected with an older businessman named Weston Liggett. Gloria’s family background and sexual history are complicated, and O’Hara seems to have given himself an alter ego in the form of a cub newspaper reporter named Jimmy Malloy. This character seems able to play the role and style of a Yale graduate, but like many of O’Hara’s characters, his aspirations are not matched by his bank account.

As for the story itself, the modern appeal is probably not as resonant to us now as it was to readers in his time. Gloria is 18 years old, wealthy, a New York society girl whose full name suggests she’s a glorious wonder either ready to be enjoyed or to initiate older benefactors into a world of beauty. She’s had three abortions, collected male and female lovers, and basically seems to be an antiquated (even for 1935) throwback to the flapper age, where party girls wore their bobbed hair, short skirts, and “free love” with endless abandon. Consider this opening scene, where Gloria wakes up after a night with married businessman Weston Liggett. Her clothes had been torn, so she helps herself to the wardrobe of her lover’s wife:

“She found two hats, almost identical black felt, in one of the girls’ closets. She put one on. ‘She’ll think she took the other to the country and lost it.’ She was aware of herself as a comic spectacle…”

Gloria is effective as a party girl for her time, but her recklessness has not aged well into the 21st century. Today, she seems tame, like a caricature of Paris Hilton from her 2003 TV show The Simple Life, desperately posturing to find a place in a world she sees as beneath her contempt. She (and the novel itself) are best seen as historical curios. Gloria lives for sex, fashion, and drinking. Consequently, her tragic ending (which we can certainly see moments after starting) does not have much effect on us now. It’s irresponsible as readers to always expect sympathetic characters, but it helps to have somebody with whom we can connect.

We can connect with Eddie, the working class writer, who seems to be attracted to Gloria for more reasons than her body. He has his moments, but O’Hara seems to just be providing this character as an obligatory move, to placate those of us who want more than just to enter the lives of unlikable people doing despicable things. The 1960 film version, starring Elizabeth Taylor, is overshadowed by the real-life medical ailments of its star. Taylor fell deathly ill after shooting the film and won an Academy Award for her efforts. Whether she was rewarded for her suffering, or her apparent affair with co-star Eddie Fisher on the set of this film, Butterfield 8 is more literary history from a distant past than a substantial and meaningful piece of American literature with staying power.

Hope of Heaven (1938) brings back writer James Molloy, the only sympathetic character from Butterfield 8. Molloy is employed rewriting Hollywood scripts, stories that don’t mean much or provide anything save for a means to an end. Hope of Heaven is more of a novella than anything else, but the voice (Molloy’s) is effective and we are drawn into the cynical mindset of our hero. He’s stuck in his office, reading Hollywood trade newspapers, listening to “…the sound of the dynamo or the generator or whatever…That sound never let up, and if you let yourself listen to it it had the effect of the dentist’s drill…That sound is in every studio that I ever worked in…”

This is how it starts, like most hard-boiled detective stories, with a character who has seen it all and won’t be surprised by what follows. Molloy is in love with a doomed woman. Her private detective father comes to Los Angeles on the trail of a case with which Molloy is connected, and tragedy (as it usually does) comes to pay a call. Molloy seems only tangentially connected to his craft of writing. We mainly see him making calls, taking calls, and having lunches. The primary feeling a contemporary reader is left with after finishing Hope of Heaven is that American literature should have had a full-blown detective novel from John O’Hara. It’s not a story with grand literary flourishes, but it doesn’t need bells and whistles to bring us to the finish line.

Pal Joey (1940) is the final novel in this collection and probably the most fully realized. Readers might be more familiar with the 1940 Rodgers and Hart Broadway musical of the same name (and the 1957 Frank Sinatra film version directed by George Sidney). The standout song from that musical was “Bewitched, Bothered, and Bewildered”, a great American songbook standard about love and eternal longing that in some ways is much better than its source material. O’Hara’s novel is epistolary in form, which can be tedious if handled by a less confident writer. Fortunately, O’Hara’s focus is strong here. We read a series of letters (published first as short stories in The New Yorker) from Joey Evans, a nightclub singer whose magnetic amiability masks the heart and actions of a malevolent womanizer.

Sinatra fit into the role like a glove, but the book works better. Sinatra’s cad wins the audience with his magnetism and ability to seamlessly manipulate with a wink and a smile and a pitch-perfect singing style. Still, in the 1957 film version he’s too old and the effect is cringeworthy (older men on the prowl for much younger women). O’Hara makes sure Joey’s focus is always about trying to land a woman and he doesn’t make apologies or excuses. The letters are addressed to a friend named Ted. We don’t read Ted’s responses, but we get the feeling he’s going somewhere. It’s another brief book, roughly 100-pages, and O’Hara’s restraint is admirable. Joey’s spelling is bad, and he’s prone to malapropisms. Again, O’Hara demonstrates his mastery of form and focus here and while the end result doesn’t make for a masterful literary effort, it’s a fun book, a quick read that proves this was a writer who deserved his place in the bleacher section of Great American Writers.

As usual, the Library of America edition includes a comprehensive chronology of its subject’s life and times. The “Note on the Texts” section details the context of O’Hara’s life while he was writing each of these four novels. There isn’t much additional information here that can’t be gleaned from reading of the texts themselves. Appointment in Samarra and Butterfield 8 were the stronger literary efforts, demonstrations of O’Hara’s aspirations towards respectability and legitimacy and indications that American literature would become more unabashedly, unapologetically sexual with time. The separate “Notes” section that closes this volume is another trademark benefit of the consistently strong Library of America series. Editor Steven Goldleaf does an impressive job providing historical context to some narrative themes of the novel’s times.

O’Hara would not be knocking down the doors with graphic language, but he unscrewed the bolts. Think of Hope of Heaven and Pal Joey as minor films made substantial in the post-production editing process. O’Hara might have been better as a short story writer. He might have also have suffered by the mere fact that he outlived many of his contemporaries, existing in the last years of his life as a conservative crank whose best time passed many years prior. O’Hara’s apparent mean-spirited personal nature and vindictiveness don’t seem to have surfaced in his first four novels, and that’s among the reasons they’re still effective. He was not a master of any style or a lyrical personal writer. Instead, he could probably be seen as a lower-key Theodore Dreiser or a less effusive and verbose Thomas Wolfe. O’Hara’s colloquial style and unadorned narrative meet the needs of his subject matter, the haves and have-nots, those aspiring to move up in class and those determined to maintain their exclusive status at all costs.