There’s probably a film to be made (or a Saturday Night Live sketch) in which super-spy Ethan Hunt chooses not to accept his mission and elects, instead, to spend the weekend eating pizza and watching golf in his underwear. Who could blame him? Now six films into a Mission: Impossible franchise that shows no signs of losing steam, Hunt (played with notoriously reckless abandon by Tom Cruise) has saved the world enough to earn a lifetime of couch surfing.

Writer-director Christopher McQuarrie returns for Mission: Impossible – Fallout and delivers the strongest installment of the series. There’s a lot of hyperbole in the critical community claiming this might be the best action movie ever made. While that’s undoubtedly a stretch, there’s no denying the film’s excellence. More specifically, its concluding sequence – a spectacular multi-stranded sequence at the foot of a glacier in Kashmir – sets a new standard for over-the-top action set pieces. 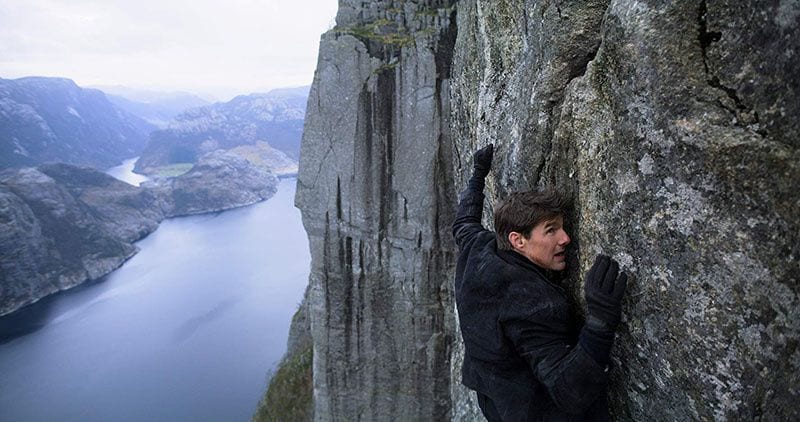 By now, the Mission: Impossible formula should be familiar. Something steep and unclimbable is climbed. There are aerial shenanigans that usually involve something crashing. Intricate car chases, usually involving at least one motorcycle, careening through major metropolitan areas. There are double-crosses, uncanny masks, and reversals of fortune. The conclusion involves the execution of a plan so complicated that even the characters involved seem confused. Oh, and there are fears that Ethan Hunt has ‘gone rogue’ from the shadowy spy organization, IMF.

Here, the ‘fallout’ of Mission: Impossible – Fallout refers to the consequences of Ethan Hunt’s good intentions. As his IMF boss (Alec Baldwin) observes, Hunt has never been willing to sacrifice a single life, even with the promise of sparing millions in return. When forced to choose between three weapons-grade plutonium cores and the lives of his team (Ving Rhames as Luther ‘the man in the van’ Stickell and Simon Pegg as techno-nerd Benji), Hunt immediately sets about rescuing his pals. 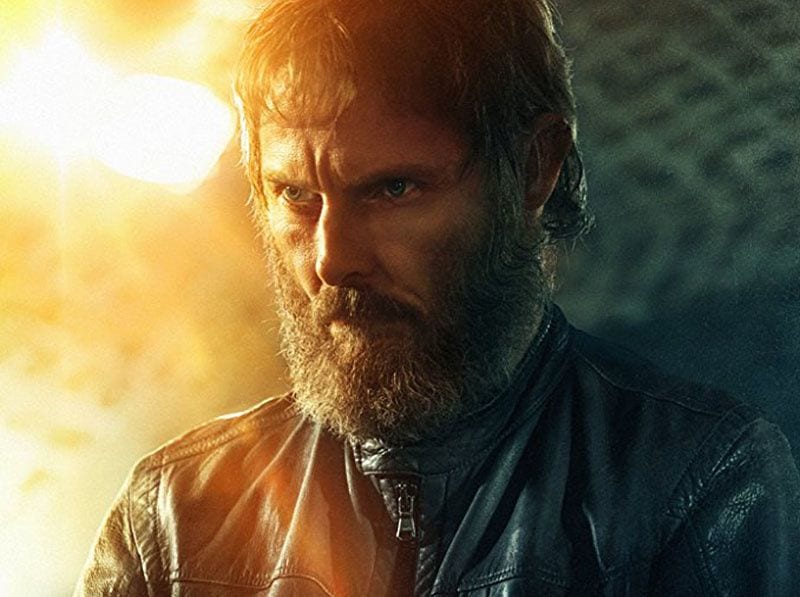 The loss of those plutonium cores fuels the globetrotting plot, which screams from Berlin to Paris to London like a high-speed locomotive. Solomon Lane (Sean Harris) returns as the primary baddie, still raw and vengeful after his capture at the end of 2015’s Mission: Impossible – Rogue Nation. Everyone in the intelligence community wants a piece of Lane, including a tough CIA director (Angela Bassett) and her trigger-happy henchman (Henry Cavill as ‘Walker’), as well as MI-6, which dispatches Hunt’s English counterpart and pseudo-girlfriend Ilsa (Rebecca Ferguson) to put a bullet in Lane’s noggin.

It’s all absurdly complicated, with allegiances changing faster than the bandages on Tom Cruise’s knees. McQuarrie, Cruise’s scribe of choice, knows that clarity is a relative term in the Mission: Impossible universe. He need only explain enough to keep the audience oriented as the action barrels forward. Unlike most action directors, who occasionally bring things to a screeching halt to re-orient the viewer, McQuarrie resets our bearings in the middle of the action. It’s a fruitful approach that keeps things moving while testing each character’s mettle under duress. The results are not only thrilling, but surprisingly emotional, as we come to appreciate how much Hunt and Ilsa have to lose if the mission goes sideways.

McQuarrie excels at imparting each scene with a propulsive momentum, partly through meticulously choreographed action scenes and the commitment of Cruise to perform his own stunts. You may have grown understandably tired of the accolades heaped upon Cruise for his daring-do, but it unquestionably impacts the pacing of the film, and for the better. Instead of being forced to cut his scenes rapidly – intercutting segments of the real Cruise with his stunt double – McQuarrie has the luxury of letting his scenes unfold through longer shots. We stay fixed on the action, giving the sense of one continuous scene rather than random bits cobbled together in an editing room. In other words, this shit is really happening. 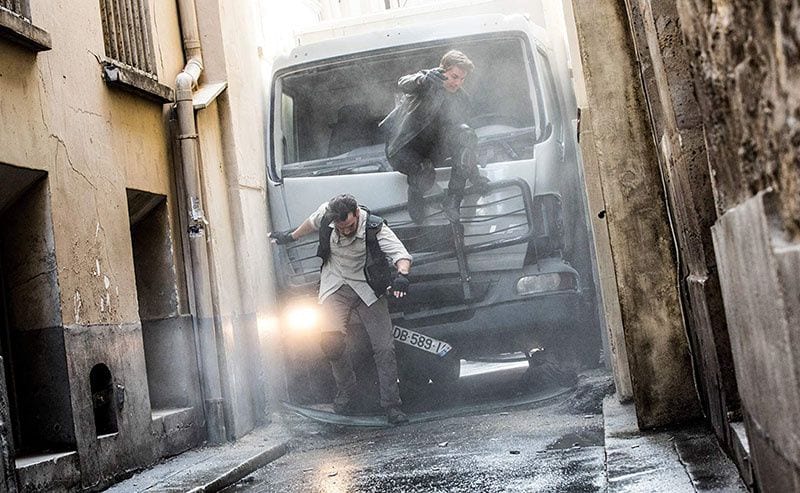 Finding blemishes with McQuarrie’s creation is a challenge, as it ruthlessly provides about everything you could expect from a Hollywood actioner. Perhaps it might benefit from more humor (Simon Pegg is under-utilized in his comic relief role), but this is a decidedly straightforward affair that doesn’t have much time to wink at the camera. It could also use a bit more of the delightfully wicked Harris, who sounds like he just drank Tom Waits’ gravelly voice through a jagged straw.

The cast is solid with the notable exception of Cavill who, though a commanding physical specimen, struggles to establish his presence on the screen. His wooden delivery and lack of comic timing stick out from the remaining ensemble cast, who play freely off one another with relative ease.

But these are minor gripes with a first-rate action film. Though it lacks the gritty humanity of something like George Miller’s Mad Max: Fury Road (2015), Mission: Impossible – Fallout is no less impressive in its dedication to character-driven action and practical special effects. It’s a dazzling, non-stop thriller that’s sure to become an instant action classic. Ethan Hunt isn’t even close to letting go.