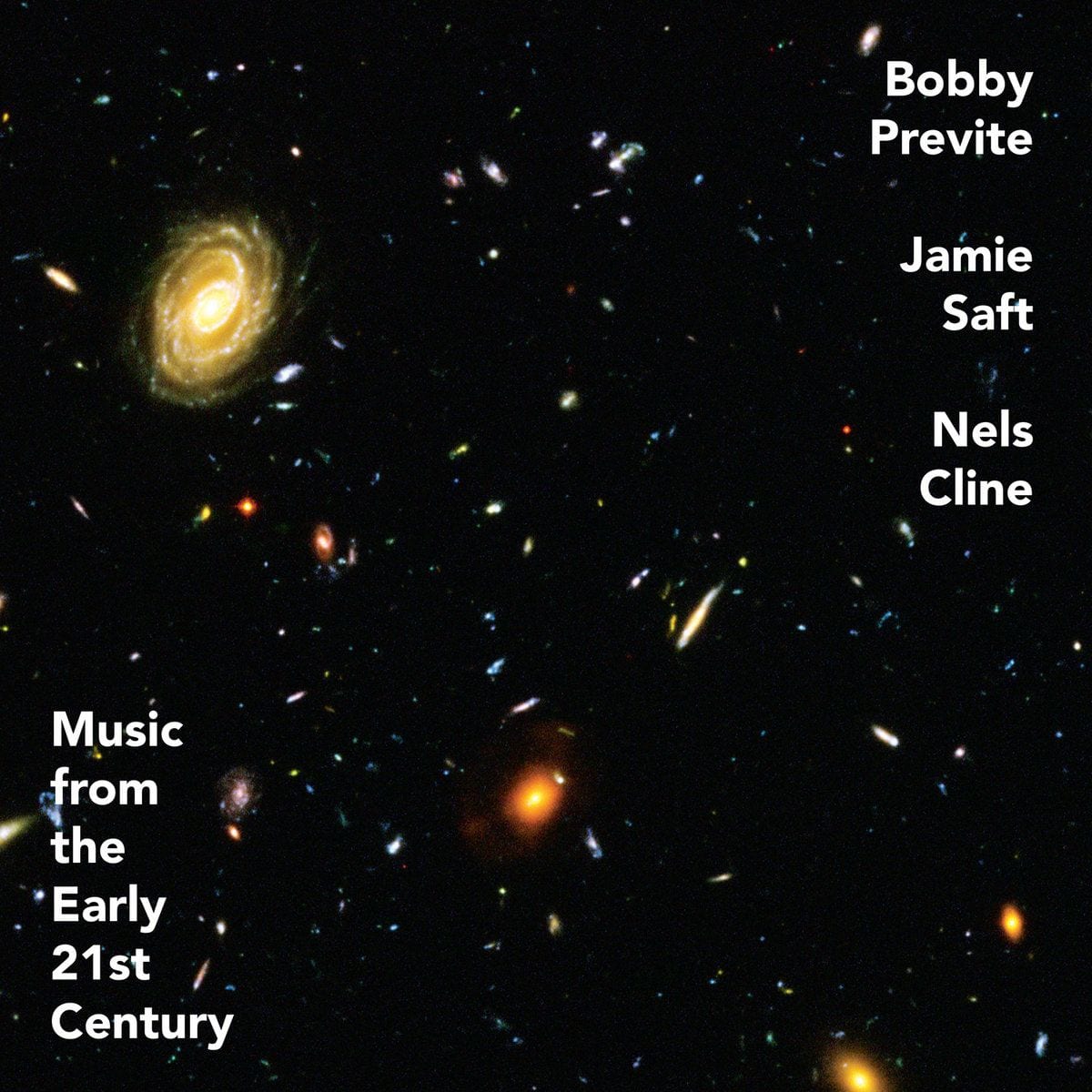 Freely improvised music generates images of saxophones akimbo or maybe a solo pianist in contemplative reverie. But on Music from the Early 21st Century, we get ten performances from electric guitar, keyboards, and drums that are both entirely improvised and supercharged with firepower.

We should expect nothing less from guitarist Nels Cline, keyboard wizard Jamie Saft, and drum sculptor Bobby Previte. Saft is a shapeshifter who plays straight ahead, avant-garde, acoustic, and electric. But here he is most wonderful, I think, buzzing on synthesizers, surging on electric organ, and creating atmospheres that sound like science fiction. Previte has been working as the most compositional of drummers across four decades. And Nels Cline, famous for becoming the sonic wildcard in the sound of the band Wilco, is most at home in wooly improvised settings. During these live recordings of pure improvisation, each man is truly at home.

In one sense, this is a classic “organ trio” in the jazz tradition—the big keyboard sound handles the middle and the bass range, the driving rhythm player cooks underneath, and a guitarist stings and soars. But that mischaracterizes the adventure and sound tapestry of these tracks. While Saft uses his B3 to fill space with great swaths of vibrating Leslie-speaker joy, even that sound is typically overdriven and snarling. Just as often, he is growling on mini-Moog or pulling acoustic-electric textures from a Fender Rhodes. Sure, there is a walking bass line from Saft’s organ pedals at the start of “Parkour” and on “The Extreme Present” with Previte swinging his ride cymbal, but that merely sets up an intense kind of drive that quickly becomes a drone that pulses rather than anything like Jimmy Smith.

Similarly, the improvising here rarely sounds like it comes from a classic “jazz” record. “The New Weird” begins with a fuzzed-out organ solo more reminiscent of Garth Hudson’s “The Genetic Method” from The Band’s Rock of Ages than of Jimmy McGriff. The opening track, “PhotoBomb”, sounds linked to the early recordings by Tony Williams’ band Lifetime, with Larry Young’s organ and guitarist John McLaughlin. The band improvises over a single tonal center that ties back to the exploratory rock of the 1960s, with energy and texture more important to the proceedings than elegantly carved melodic phrases.

The other, related antecedents, of course, are the Miles Davis studio and sessions that created his classic albums from In a Silent Way and Bitches Brew up until 1975. Culled from longer sessions that were based on sketches but were significantly improvised, they were shaped into album form by producer Teo Macero. Music from the Early 21st Century has been similarly crafted. “Totes”, for example, is a short episode built on the atmospheric blend of Saft’s electric piano and Cline playing haunting washes and cries on guitar. It doesn’t travel anywhere, harmonically, but sustains your interest, seeming like a bridge from the intense drone of “The Extreme Present” to the growling, creepy ambiguity of “Occession”, which moves from fairly tonal organ work to a Cline solo that is dissonant and thrilling—Hendrix-ian wailing that sounds like the soundtrack to a modern acid trip. It’s fitting, however, that it ends with a two-note lick by Saft that comes straight from a Davis recording of 50 years ago.

Plenty of the sounds here are equally grounded in more contemporary music. “Machine Learning” is also largely a drone, but the synth sounds come from modern electronica, with scrapes and whines that are atonal and link into the repetitive pulse that Previte is generating. “Paywall” is easier on the ears, starting from a wobbling synth bassline and clicks on the snare head, but it also trades in the kind of hard, unswinging groove that comes from electronic music. Previte, always so human as a drummer, eventually starts to bring a bob of his head to the sound, but the synth and guitar remain from the world of Krautrock.

One of the longer tracks, “Flashmob”, starts with a synth bass that has some vocal fry and a pop-music instinct. Could it be that this music—meant to document a moment in time—is willing to grab a bit from what the kids are digging in the early 21st? There is something wonderfully playful here, but it’s far from pop music, of course, and the adventure of the performance takes the trio into machine-like abstraction and even, wow, ballad territory. That gives way fairly quickly to a Previte-fueled rave-up with guitar and drums dueling at a delirious level—which is simply the fate of this kind of playing. The audience had to be loving it.

The most remarkable thing about Music from the Early 21st Century is how evenly and effectively it allows each member of the trio to shine, even though the band is rich in ensemble play and listening. As a drummer, Bobby Previte has never been considered flashy, but his balance of precision and purposeful ragged edges keeps everything feeling organic. Cline was built to shine on a landscape both free and inviting to dynamic and tonal variation. And Saft is left to build the rest of the atmosphere, coming off as the MVP: his keyboards serve as groove builders, soloists, texture-makers, and disruptors.

As freely improvised music, this trio’s work is a particular revelation. The problem with musicians who operate without predetermined composition is that they have to meander for a while before they hit on an idea that really works. Some listeners love the process of discovery that this documents and others may feel that the essence of creative music often sits at the intersection of composition and improvisation. Why take one of those poles away? Saft, Previte, and Cline have answered that question by presenting their concert improvisations as an edited whole and—because of their genius in using rock elements in this music—using the smallest repeated motifs that they spontaneously find as effective composition.

Music from the Early 21st Century works as a title largely because the last 20 years have given musicians the liberty to explore freely without any concern about selling albums: the market for recorded music has vanished. And any generational prejudice in favor of purism melted away at the same time. So we now have creative musicians who are as enamored of Zappa as they are of Ornette as they are of Ellington as they are of Squarepusher. That kind of eclecticism is alive on this recording. Previte, Saft, and Cline give it fluid, scalding expression.