L’Argent, which means “money”, is a monumental production that cost a then-fortune of five million francs and looks it. Perhaps it’s ironic that a film about money cost so much, especially since its plot concerns the possibility of crashes, bank collapses, and ruination based on greed, speculation, and irrationality, which pretty much sounds like the crap shoot of an expensive movie. Presciently, the film was made one year before the great crash of 1929.

The story loosely updates Emile Zola’s 1890 novel, which was partly inspired by a colossal bank collapse in 1882. In real life, the bank was the Union Générale. Zola’s novel and this movie call it the Banque Universelle, and it’s run by an unscrupulous swindler and lecher, Saccard. He’s played in the film by Pierre Alcover as overweight and lipsticked with beads of sweat on his temples. He’s such a “typical” fatcat that he might have been typecast by Sergei Eisenstein and lifted directly from the latter’s Strike (1925).

Saccard suffers a setback in speculation, thanks to the interference of tall, dapper, grey rival banker Gundermann (Alfred Abel), forever stroking his little doggies. Gundermann declares that he’ll always block unscrupulous speculation that leads to panic and ruin. But Saccard manages to reinstate public faith in his bank by falsely implying he has Gundermann’s support and spreading rumors of doubling the bank’s assets. (In the book, Gundermann is Jewish, which goads Saccard’s antisemitism; the film is less clear, although Gundermann does employ a shill named Solomon to emphasize his wisdom.) 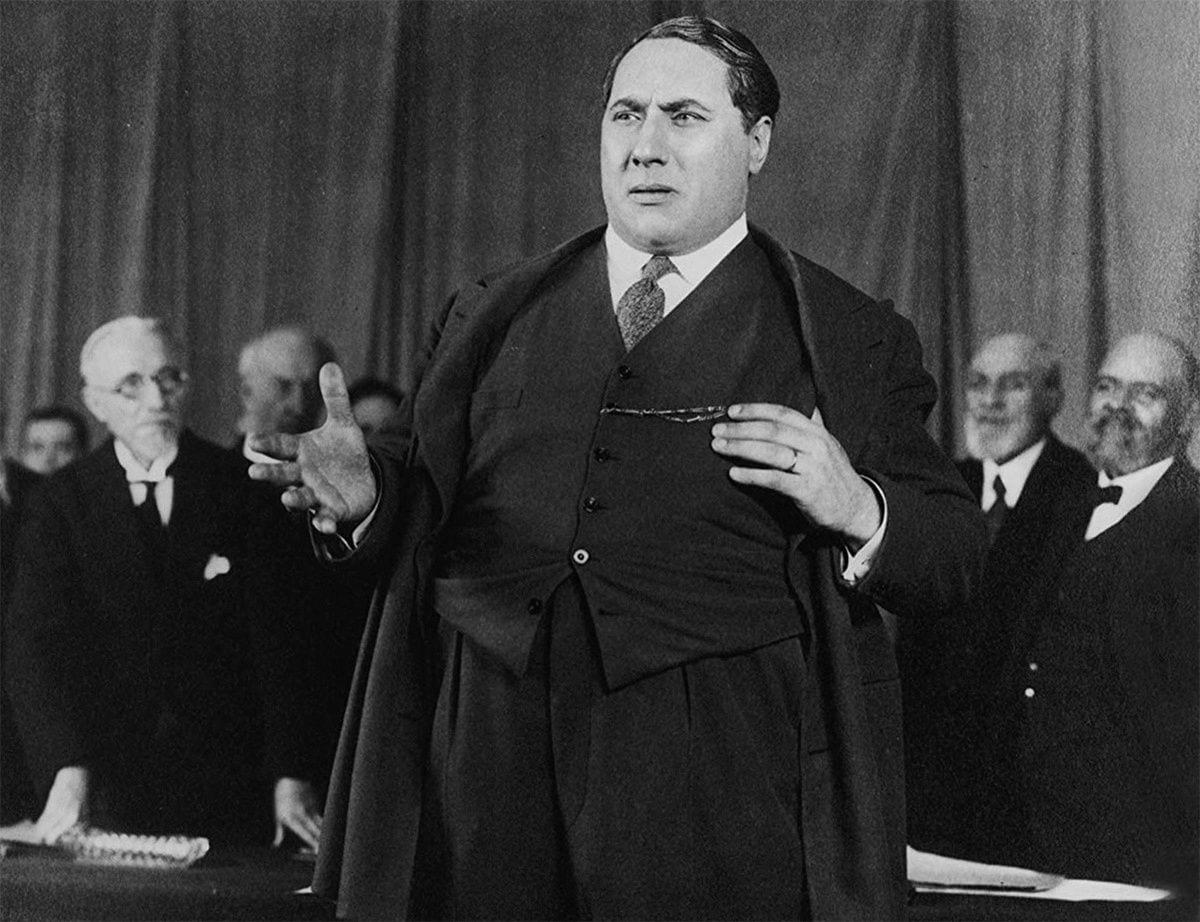 Since appearances, gullibility, and emotions dictate the international financial scene, Saccard gets away with his flim-flam until he stages a publicity coup. This involves a transatlantic flight by scar-faced aviator-hero Hamelin (Henry Victor), who wishes to set up oil-drilling in South America, even though he’s going blind. While Hamelin’s on the other side of the world, Saccard takes advantage to put the moves on the aviator’s wife Line (Mary Glory), who spends the movie in various states of unease, panic, or delirium.

Mixed up in all this is a glamorous viper, Baroness Sandorf (Brigitte Helm), who dropped Saccard when he was down and seems intent to keep him down with Gundermann’s collaboration. Also running around are Saccard’s secretary (Antonin Artaud) and a mysterious old woman investor (Yvette Guilbert) who only buys doomed stocks as a “kiss of death”.

What the story and characters have to say about the Roaring 20s, its giddy adoration of aviators and equally giddy sliding on the thin ice of the stock market, pales in comparison to the movie’s frantic style. Or rather, the frantic style is how the film really comments on everything. The camera is almost constantly moving, gliding and sliding in all directions, sometimes flying, sometimes nearly staggering in handheld hysteria by photographer Jules Kruger. The shot in the 360-degree map-room with curved walls is a jaw-dropper.

A “making-of” that was shot at the time by L’Herbier’s young assistant, Jean Dreville, is included as an invaluable bonus. Called Autour de L’Argent, which means “around L’Argent” (and may function as a pun on auteur), the film shows the elaborate systems used in shooting, which include pushing the camera on sliding tripods, dollies, and bars from the ceiling. 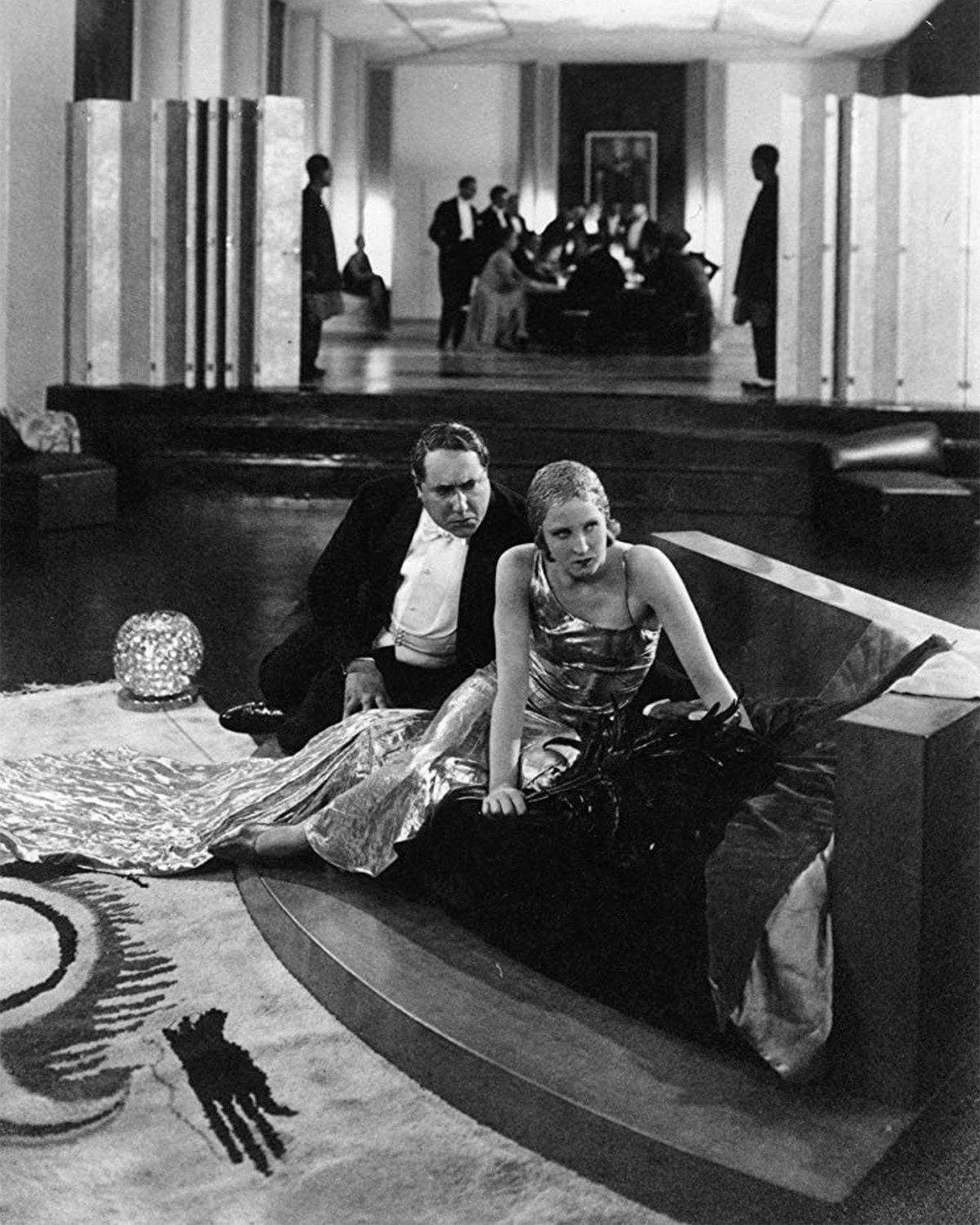 At one point, in the montage of Hamelin’s airplane taking off, we see dizzying aerial shots of the stock exchange taken by a camera that spun down on a small platform from the ceiling, man-less and rudderless; Dreville’s film explains those stupefying shots. As Dreville’s narration points out, it also shows how physically expressive L’Herbier’s directing was.

All this movement keeps the viewer continually as unbalanced as the camera and the world it captures. It’s a world of zig-zags of fortune, swirls of fate, daredevil flights, breathless radio announcements, and high-kicking charlestons performed on a plank over a fountain by the uncredited Dolly Sisters. All this amid sets as monumental as any in the era’s German films. The art directors were André Barsacq and Lazare Meerson, and the camera occasionally stands still long enough for us to grasp their Art Deco spaces, with shadows of giant goldfish swimming on the walls (the bubble world? the world of bubbles?), or the shadows of revelers washed across ceilings.

The film is presented with a choice of two new scores. Aside from the making-of and a note on its restoration, the extras include L’Herbier’s 1921 short, Prometheus Banker, which show that he was already interested in the idea of a wheeler-dealer tycoon who becomes a slave to money. He’s presented “behind bars” while at work, and he has an Achilles’ heel in a girlfriend with an elaborate peacock head-dress. The excellent booklet gives more background on the feature’s filming and includes L’Herbier’s acknowledgment of the paradox of blowing so much dough on a movie that’s critical of high finance.

Fragment of an Empire (Oblomok imperii)

In so doing, the film embodies the paradox of Ermler, whose status as a fully committed communist allowed him to get away with films in which he admits the problems and casualties created by building the workers’ state. In other words, as explained in the commentary and booklet, his films often mix sympathies and contradictions that fly in the face of more doctrinaire films made by less ideologically committed (and less imaginative or sympathetic) artists.

This is also the last of his four silent films starring Fiodor Nikitin, an important theatrical actor whose practice of “the method” from the Moscow Art Theatre often put him at odds with Ermler, who seems to have worked with him with some of the collaborative tensions we associate with Werner Herzog and Klaus Kinski. In his very useful commentary, Russian historian Peter Bagrov even recounts an anecdote of Ermler supposedly pulling a gun on Nikitin during filming, which foreshadows a similar Herzog-Kinski story.

The plot is simple, absurd and moving. Filimonov (Nikitin), looking as wild as Rasputin, was a peasant and St. Petersburg factory worker who’d become a non-commissioned officer during the Great War — that is, among the White Russians — as it turned into the Russian Revolution. Losing his memory from shell shock, he worked for ten years at some provincial railway station until his identity comes flooding back in a startling series of montages during Part 2. The montages represent psychological states and abstractions more than material reality. 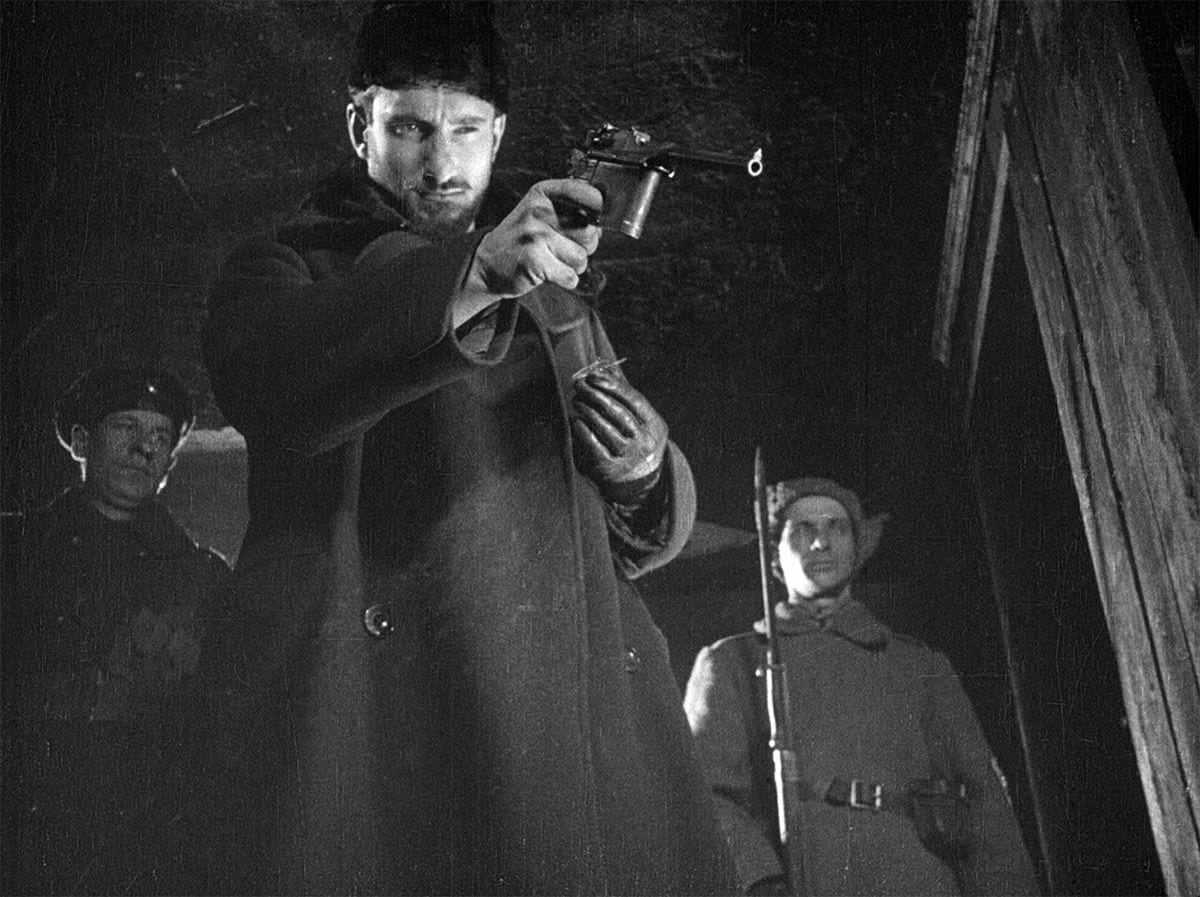 In this example, he “remembers” events that are purely symbolic or emblematic rather than true biography. He remembers an elaborately stylized meeting between a Russian and German soldier who approach each other in a longshot presented as a negative, so that both figures are white shadows along a lightning-like zig-zag. It’s a moment of political revelation about the soldiers’ fundamental similarity as pawns of the capitalist structure. This idea is literalized and surrealized by having Nikitin play both soldiers, as well as both German and Russian adjutants who carry out their respective generals’ orders to fire upon the subversive pair. In other words, Nikitin plays all four proletarian figures in a sequence of brazen showmanship.

Filimonov’s memory has been restored by glimpsing his wife looking out of a train window. She’s played by Liudmila Semionova, most famous from Abram Room’s brilliant 1927 film, Bed and Sofa. Filimonov rushes to St. Petersburg and is stunned and bewildered that an enormous Constructivist building has replaced his simple street of homes. Everywhere he sees big and little things that confuse this bit of human flotsam popping up like a phantom from the old regime — statues of Lenin, different coins. “Where is St. Petersburg?” he asks as he rushes down the streets, not realizing it’s now called Leningrad.

His despair comes to a head at the home of his former factory owner, who is now reduced to genteel penury with his wife. The movie’s sympathy toward this superannuated bourgeois couple, jetsam or detritus cast off by the new state in which Filimonov also has no part as yet, is as startling as their sympathy for him. This tearful sequence is the movie’s most tender, if we don’t count the distressing early scene with a mother dog who provides succor to a thirsty soldier.

This frightening and melancholy spectre of Rip Van Winkle’s strange new world isn’t dogmatic propaganda, nor is depiction of the hypocritical nouveau-bourgeois Party official to whom Filimonov’s wife is now married. She’s an unhappy housewife chained to a tyrant who gives lectures at the local canteen on the importance of treating your wife as a comrade instead of keeping her in the kitchen. This critique is a major sign of scriptwriter Katerina Vinogradskaia’s vision, and it’s the problem left explicitly unresolved at the film’s fascinating ending. 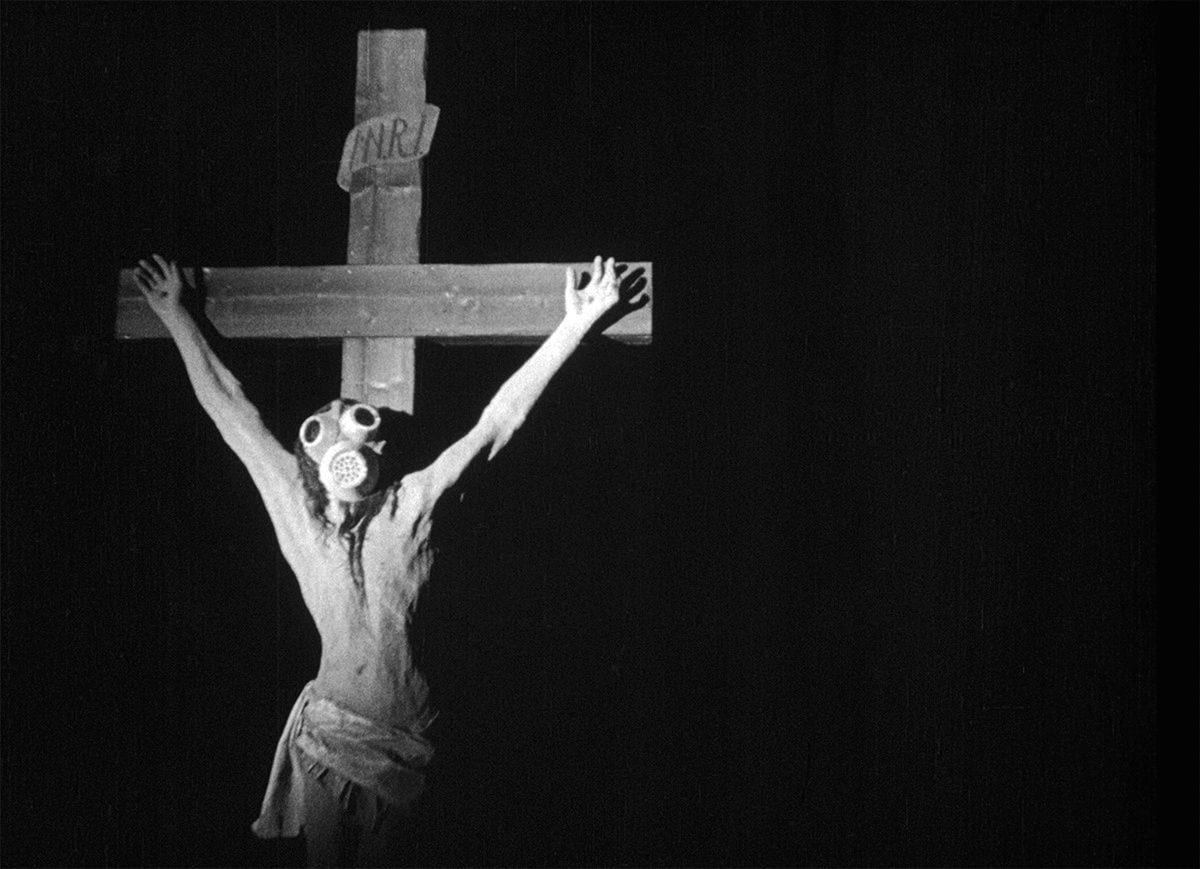 In between, Filimonov has a painful struggle to get with the program of the new socialist state, and the film’s work as propaganda is that he eventually cleans up and starts quoting Lenin in his new role as one of the factory’s new laborer-masters. As he stares into the camera, the viewer is left to decide how much is triumph and how much is loss. The film’s work as psychological profile, which often runs counter to the propaganda, includes the sensitivity, humor, and existential fear with which Filimonov and Nikitin dominate the proceedings.

This major restoration has rediscovered important shots and elements long lost from Russia’s prints. For example, only two versions in the world (including the American print at the Museum of Modern Art) retained the shocking imagery of a battlefield crucifix of Christ in a gas mask, presumably because some soldier hung it on as a joke. It echoes a famous drawing by George Grosz, a friend of Ermler who gave permission for its use.

We’ve indicated the magnificence of the (uncredited) editing, and also worthy of praise is Yevgenii Shneider’s photography and the sets by Yevgenii Yenei. Two musical soundtracks are offered, one being closer to that composed for the original release. Bagrov is joined on the commentary by restorer Robert Byrne, who points out the eyeblink glimpse of a naked man during one climactic montage and who also narrates a short piece on the restoration.

Fragment of an Empire is offered as a DVD/Blu-ray combo while L’Argent is a Blu-ray only. Both are essential to fans of silent film, which is to say, fans of great cinema everywhere. These films will make viewers yearn for more from these woefully under-represented filmmakers, both of whom could use major retrospectives “toot sweet”.