Anyone who says they don’t love the Beatles is probably lying. As a Beatles fan, naturally I jumped at the chance to read and review the new graphic novel published by Titan Comics, The Beatles Yellow Submarine.

How can a graphic novel capture the experience?

The answer is rather complex. On one hand, of course this isn’t the same experience as listening to the great music and watching the trippy images of George Dunning’s 1968 film. On the other hand, adapter/artist Bill Morrison seems to recognize the task ahead of him and has painstakingly worked to recreate not a replacement (how could anyone?) but a companion piece to the classic film.

In this respect, Morrison has resoundingly succeeded. The Beatles Yellow Submarine is a beautiful book that captures the surreal beauty of Yellow Submarine by an artist who clearly loves his inspiration.

The title page alone reads like a credits sequence. John Lennon and Paul McCartney are listed first as authors of the original song, followed by Morrison’s own credit and every screenwriter from the film. Then comes the designer of the look of the film (Heinz Edelmann) and the inkers, letterers and colorists of the book itself. In lieu of an introduction, this opening page seems to suggest that, yes, Morrison knows the huge footprints he is trotting upon and, yes, he’s about to try his best with his team to give you the best possible graphic novel version of this classic film. 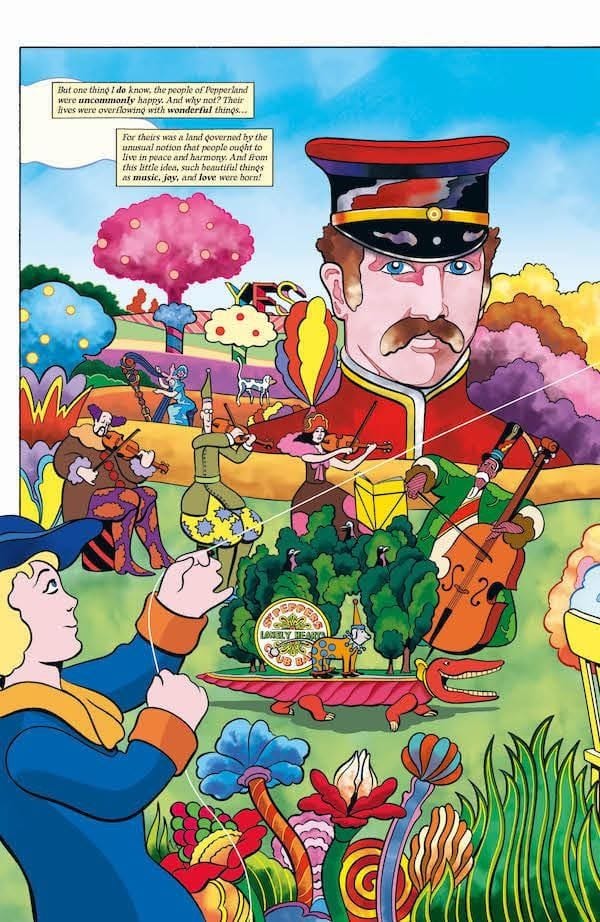 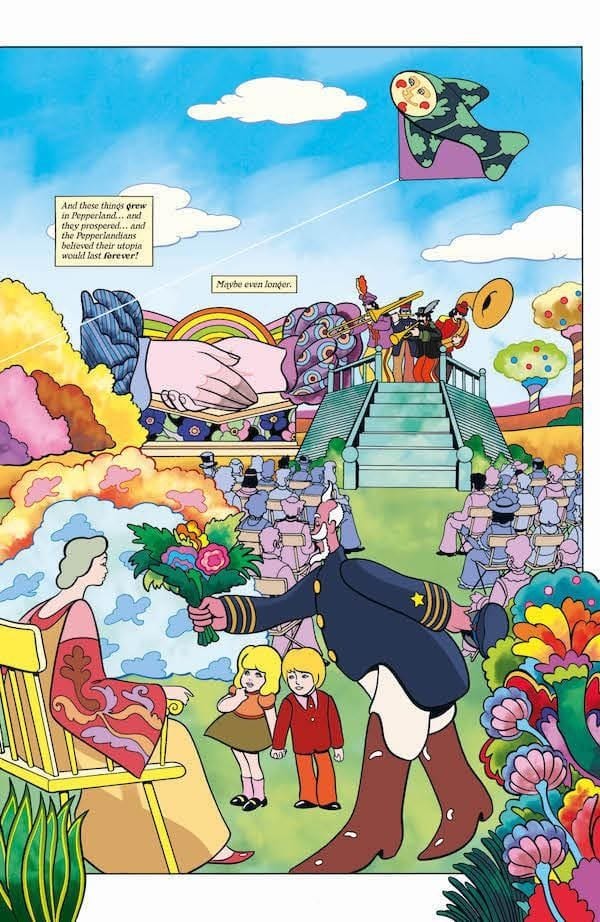 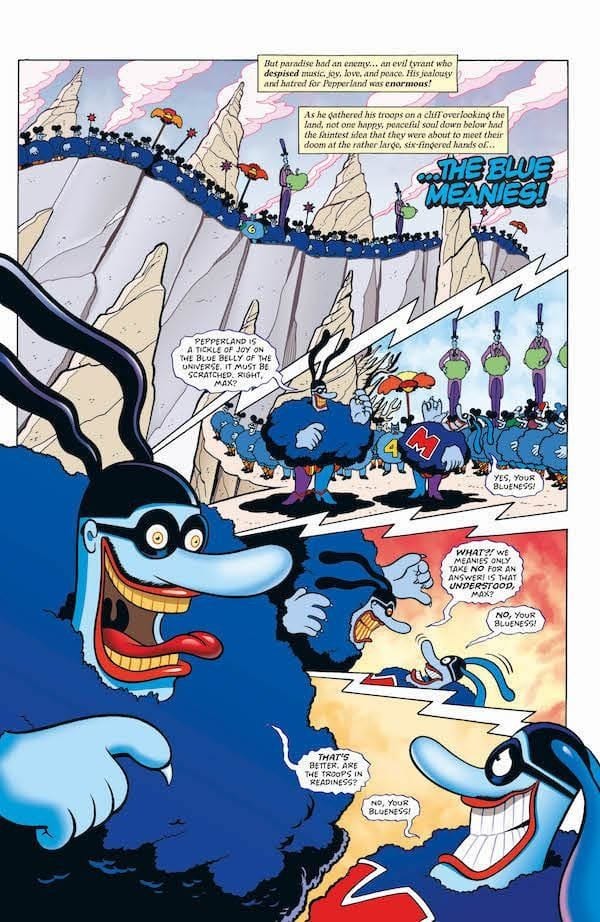 Beginning in Pepperland just before the evil “Blue Meanies” (who hate music) attack, Morrison brings us on the titular Yellow Submarine’s journey (floating through air, not just water) to Liverpool to seek out the help of The Beatles in his attempt to rescue his land from the music-proof bubble it is now threatened by. Whom, but the Beatles, would you ask?

If the opening clues you in to just how strange this story is going to be, you might be a denizen of Pepperland yourself. We soon see Ringo turning the page of the very book he is in and showing us gunfighters, superheroes, space explorers movie stars, giant foods and even Frankenstein’s Monster on his way to collect his mates (John, Paul and George, of course) to convince them to journey back to the musical paradise under the sea and help “Old Fred” fight off the Blue Meanies.

By this time in the film we have already enjoyed three songs. How to convey song in graphic novel form? The solution to this problem is obvious. As you’re reading the book, play the soundtrack. Those of you who don’t have it on vinyl (ya poseurs, ya) surely can access the MP3s easily enough.

That said, when I say there are little to no actual allusions to the songs, I mean it. While it’s understandable that a song like “Eleanor Rigby” might be hard to force into a graphic novel version of the story (it honestly barely fits in the film, aside from being a great song), it’s curious that the lyrics to the title song were not included in some form to move the journey along. “All Together Now” is similarly avoided as the Beatles learn to operate the submarine.

Naturally one cannot expect a direct adaptation from musical to graphic novel, but in that the title the song does tell something of a story in itself; one might want for a representation of it or at least the visuals that went with it and “Eleanor Rigby”.

That said, the visuals that we are given here — over 112 beautiful pages — are breathtaking. Often they seem like screenshots from the film, fitting harmoniously together with word balloons added in for narration. This is as close to the film’s visuals as Morrison admirably comes. To tell this story, Morrison doesn’t merely copy the visuals but adapts them, taking not only the design but intent of each scene and representing it faithfully but not imitatively. Points of view are shifted, composition changes and longer shots are combined into a static, breathtaking picture. 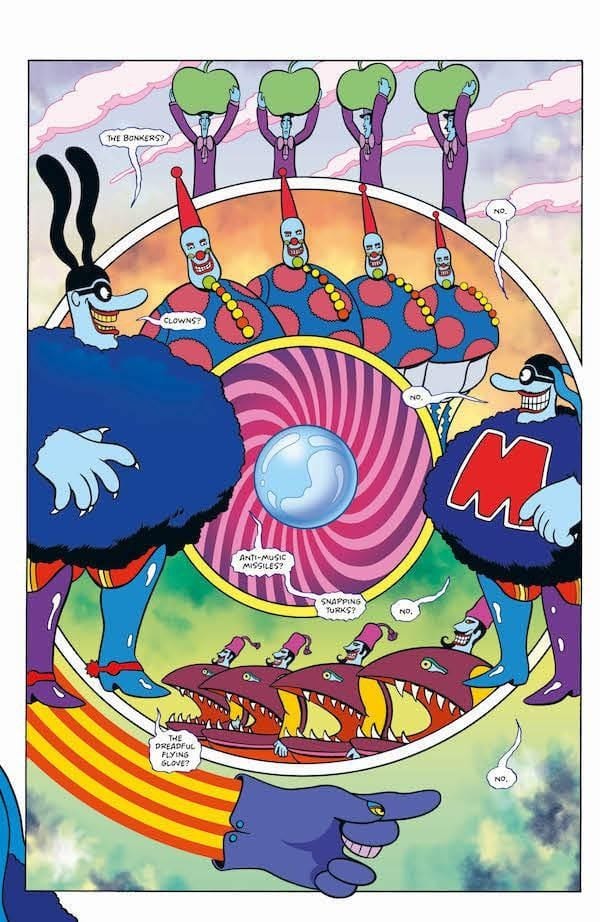 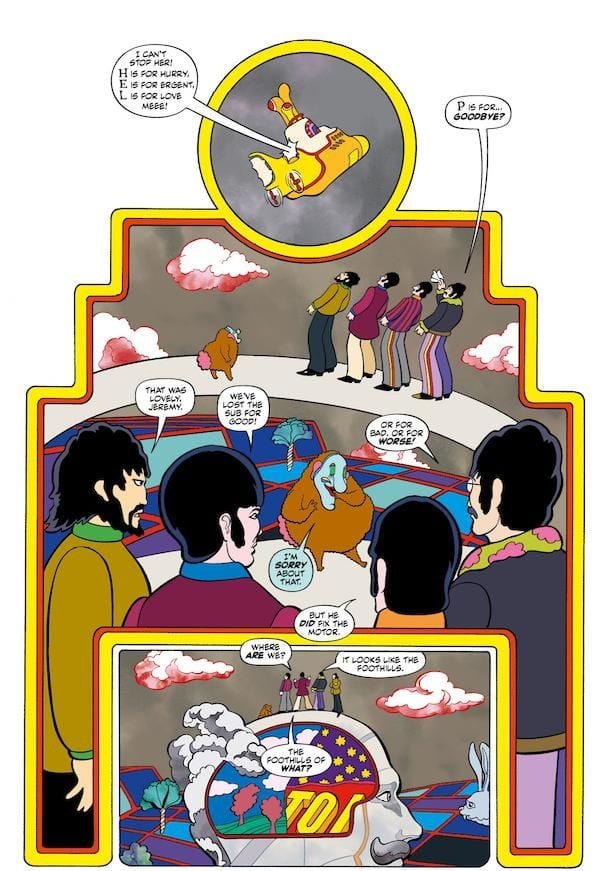 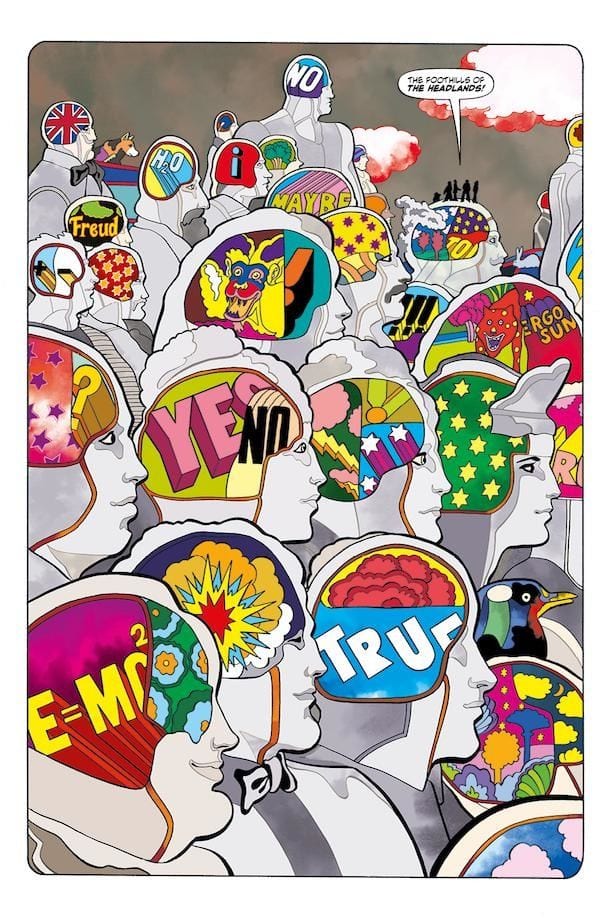 The surreal pop-art style is truly captured as the Beatles and Old Fred make their journey, in vivid, loving detail. The hollow human heads filled with colorful ideas are all here, as are the strange creatures, the holey sea, the sea of green and even the bizarre hybrids of the villains themselves are all evoked accurately with stunning color.

The Beatles Yellow Submarine is psychedelic and even mixes its psychedelia to fully represent the strange combinations found in the film. It’s faithful to its source. Absent the songs, the drawings bring you right back into the fascinating tale of Yellow Submarine.

This painstaking attention to detail is seen again in the appendix of the book, entitled “Concept Art and Sketches”, where Morrison’s pencils are on display helping to show his enchanting creative process.

Still, the fact remains that this book is an adaptation of a motion picture musical made into silent, static drawings. However, this proves to be another unique and exciting aspect of this work as companion piece to the film. Whereas we might have to pause the film to really inspect a great image, here we are able to take our time and enjoy the beauty or flip back and compare page 77 to page 21.

If it still seems odd that a story is told about animated characters stealing music and the greatest rock band in the world brings it back without sound, keep in mind that this is a visual companion piece that works in many ways. Think of the graphic novel as the silent, static world of the Blue Meanies and the film as the final result with vibrant sound to influence the stunning colors. Those who have seen the film will delight in this work; those who have not will want to then see the film.

In that the visuals lend themselves to adaptation on the gridded page so well, it’s clear that someone was going to create a new art book about Yellow Submarine at some point. Is it not a great blessing to Beatles fans that it was crafted by someone with such care for the story and imagery found within the film?

Morrison’s The Beatles Yellow Submarine is a welcome addition to my collection of ancillary Beatles merchandise. It will be returned to as a reference, and it will serve as a companion piece and tribute to the film. Naturally, I will be playing the music of the Beatles as I read it however, as that is the one thing, perhaps the only thing, that is missing.