In memoir 100 Times (A Memoir of Sexism), author and artist Chavisa Woods chronicles the systematic sexism and gender oppression she’s withstood over the course of her life. From the childhood chidings suggesting boys use violence to show affection to work-based gender inequality, to unsolicited groping, or distressing accounts of toxic masculinity and rape, Woods’ text pinpoints the pervasive threat posed by institutionalized sexism.

Regardless of her age, location, gender performance or any other type of cultural condition, Woods reiterates the threat is inescapable and encountered daily by women. Yet Woods refuses to be victimized. Several of her recollections are underscored by consciousness-raising and the development of agency.

Woods is methodical in her analysis and deliberately examines various cultural conditions informing her experiences with sexual harassment. She advises that gender-based violence is never mitigated by race, class, or sexuality. She demonstrates how queerness, for instance, is an unequivocal threat to the patriarchy and hegemonic masculinity. So many of her struggles with sexual harassment and gender violence are due to her out queer identity or her rejection of normative gender performance.

In one case, she was working on Wall Street and harassed for looking “butch, with a freshly shaved head, in a collared shirt, vest, and tie” (192). A group of men catcall, grab then forcefully French kiss her only to end the abuse by calling her ugly. Woods’ gender transgression is thereby policed and she is forced to abide by a dominant conception of gender.

Despite occurring in a busy part of New York City, no one comes to her aide. She braves the assault alone. The lack of response to violence against queer women is a result of their marginalization. According to Woods “we’re nothing to them. Queer women that is. We don’t exist. They don’t see us” (79). Yet they do see queer women when heteronormativity is subverted and the overlap between sexual prowess and masculinity is rejected. Woods unabashedly reminds readers that subversion is deemed as an absolute threat and an equally powerful weapon. 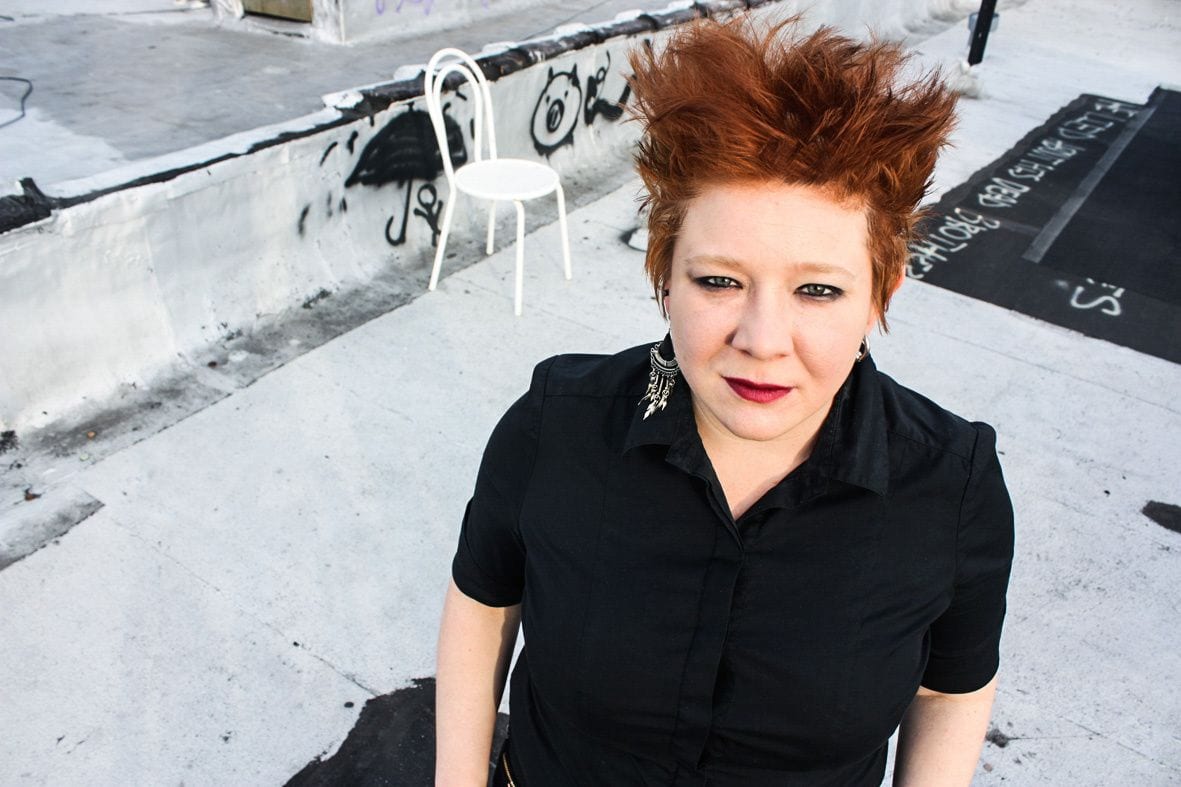 Photo of by © Itziar Barrio (courtesy of Seven Stories Press)

Astutely, Woods notices her subversion of normative gender is only negotiated when she enacts acceptable standards for women. In one notable narrative, she walks to a friend’s home to babysit and is catcalled with the unoriginal question “hey gorgeous can I get your number?” (183). With the baby in tow, she re-walks the same path and is saluted and greeted respectfully by the same men who previously harassed her.

The acerbic vitriol Woods faces is informed by homophobic and sexist discourses. But Woods is on point. She disavows the belief that women who perform dominant gender norms are safe from sexual harassment. They are not. Rather, the performance of dominant gender standards only serves to make men feel safe in their archaic conceptions of masculinity.

The threat of sexual harassment is only contained when Woods starts responding to the violence with her own violence. For example, when she was 22 and dancing with a friend at a club, a man continuously tried to dance up on her even after she told him “no”. After he tries to physically pick her up, she grabs him in a chokehold and knocks him out. Only then does he cease the unwanted advances.

In another example, a friend notices Woods is about to respond violently to harassment. The friend stops her and says “you can’t do that…it’s not okay. You can’t keep hitting any man who comes on to you twice or says something sexist” (102). The friend fails to tell Woods what is allowable. Quite likely because there are no other options. Here Woods is symbolically realigned to the acceptable norms allowing her to undergo violence but disallowing her from enacting similar actions.

Throughout 100 Times, Woods remembers the multiple times other women have defended and supported her when she faced sexual harassment or violence. As a teenager and forced to endure a male bully, the other girls in her class bolstered her. When working for a non-profit and struggling with a male colleague’s gender discrimination, it was her female colleague who protected her and ensured Woods would no longer face the abuse.

In turn, Woods also protected and supported other women. In one harrowing memory, Woods recalls laying in her friend’s hospital bed. Woods stood as the friend’s protector as she recovered from a brutal rape. Woods reaffirms the power of collectively and “the truth is that, ultimately, women look out for one another” (119).

With a writing style evocative of Gertrude Stein, Woods frequently relies on repetition to emphasize sexism’s ubiquity. For example, she begins several chapters with “When I was…” and then includes her age, location, and other contextual details. In doing so, Woods exhibits the probability of experiencing an act of sexual harassment or gender violence transcends time and space.

Much as Stein used repetition to emphasize detail, Woods employs a similar effect. These details reiterate how the harassment is undesired contact while debunking the misconceptions shaming the survivors. For example, she repeatedly details her actions and attire to reject the ludicrous notion suggesting she was either “asking for it” or knowingly putting herself in a dangerous position. She disallows readers from succumbing to the internalized sexism diminishing the severity. As such, readers cannot reaffirm the normalization of gender-based harassment and violence.

Woods’ memoir is multifaceted and relatable, her writing is conversational and responsive. As such, 100 Times (A Memoir of Sexism) is the ideal tool for inciting the collective rage needed to subvert gender-based harassment and violence.