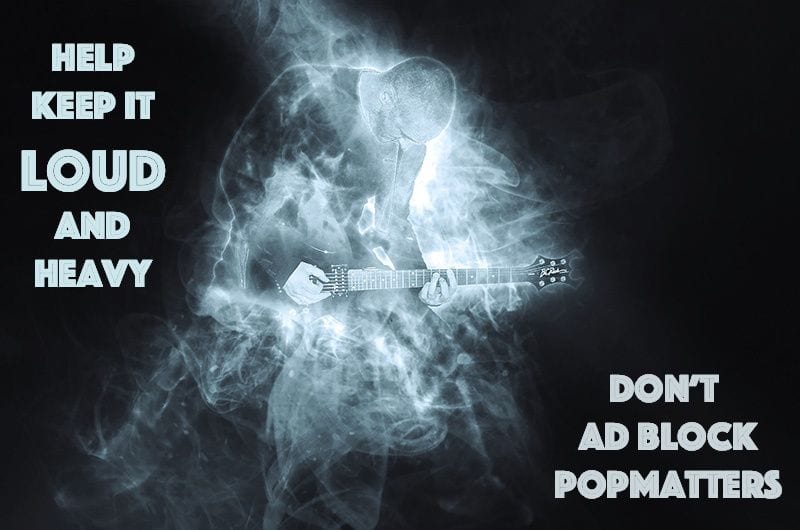 Rock ‘n’ roll is one of our saddest paper tigers,” wrote Tim Sommer in 2016, in a delightful article for the Observer titled “How Rock ‘n’ Roll Failed Us Again This Presidential Election”. “Do you know what a paper tiger is? That’s something that appears to be strong or threatening, but is in fact ineffectual and weak.”

“Rock ‘n’ roll, which makes such frequent and dramatic use of rabble-rousing sloganeering, has been virtually a complete washout when it comes to meaningful political action or instruction,” he writes. “I do not want to diminish the emotional or social impact of rock ‘n’ roll, but it has succeeded in inspiring people to run to Hot Topic, and failed in inspiring them to storm the Bastille.”

His broad point could be disputed, but he was writing in the embittered aftermath of the 2016 election which brought Donald Trump to the presidency, so we’ll forgive him the generalization. Yet there is an undeniable truth to the fact that while pop music has pushed social and cultural boundaries in profound ways, it’s not uncommon for attempts by musicians to be politically provocative to turn out more show than substance.

An interesting contrast is provided by two music videos released in May of this year, both of which I eagerly anticipated: “Auslander“, by veteran German heavy rockers Rammstein, and “Klefi/Samed“, by the beguiling Icelandic electro-industrial band Hatari. They provide contrasting studies in both how, and how not to, confront colonialism through the power of music videos.

Rammstein’s “Auslander” (which translates as ‘foreigner’) is the official music video for this track taken from the band’s self-titled 2019 album.

The video operates on a combination of whimsy and pith. The iconic band play a boatload of adventurers, an amalgam of Victorian-era colonizers and modern-day adventure tourists. They come ashore and are met by a group of indigenous folk. What follows is a caustic spoof of European ways: the band members bumble around like the worst sort of tourists, taking photographs, ineptly mimicking local dance, eagerly embracing the worship of the Indigenous villagers.

The satirical power of the video lies in the Germans’ over-acting, in their deliberately ridiculous pantomime of colonial ways and in the ludicrous pomposity of their behavior. But it relies on a certain positionality on the part of the viewer. There is nothing here that deliberately outs the colonizers’ behavior as bad. We, as viewers, are expected to draw that conclusion as soon as we see white-skinned folk being waited on hand and foot by indigenous villagers; as soon as we see white-frocked bishops drilling western ways into open-mouthed indigenous children.

The problem with relying on satire of this sort is that it remains devilishly open to interpretation. There is nothing here to make a racist audience uncomfortable. Indeed, viewers on the opposite end of the ideological spectrum might easily derive pleasure from watching the white folk treated like gods, deriving comfort, and sexual satisfaction from their sojourn among the natives. We can interpret the band’s message as anti-colonial, if only because of the certain bumbling-ness to their acting and the fact there is a prevailing consensus in the western world that this sort of colonial behavior is wrong (not to mention the fact music pundits have responded to it in that spirit).

But the video derives sly benefit from its light-hearted, ambivalent political sentiment. By grounding itself in humor, the critique is lightened, and rendered palatable for a broad audience, not all of whom might appreciate the anti-colonial edge of its intentions. Indeed, at the end of the video, it is the white man who is crowned king. The entire performance retrenches the notion of colonialism as an ultimately harmless historical foible — centering the takeaway message so many white folk continue to hold.

There is also a certain quiescence among the indigenous actors here. We see neither resistance (beyond the odd puzzled glare) nor change; they are the unchanging and eternally accepting foil to the Europeans’ bumbling ways. It’s a role that is deeply gendered, as well. The ubiquity of literally naked women, while innocuous enough in a discourse on colonialism, is rendered suspect in a video designed for mass audience consumption in a mediascape where sexualization of women — and particularly racialized women — remains an intractable commercial draw. The sexual fetishization and commercialization of dark-skinned bodies have become integral elements of neo-colonialism. “The basic premise underlying human rights, and by extension, sexual rights is human dignity and human potential; degrading images that perpetuate negative colonial discourses about Black female bodies erode both,” writes social historian Dr. Akeia Benard, in her 2016 article “Colonizing Black Female Bodies Within Patriarchal Capitalism: Feminist and Human Rights Perspectives” (Sexualization, Media & Society, Oct.-Dec. 2016).

The indigenous villagers, who greet the invaders with open arms, are portrayed as happy-go-lucky servants to the Europeans, eagerly acquiescing to the Europeans’ expectations of luxury and sexual servitude. It would be one thing if they drove off the Europeans by the end of the video, but instead, the Europeans leave of their own accord when they’ve had their fill, leaving one of their own number behind to rule over the village.

As much as I appreciated the critical sentiment Rammstein seemed to be trying to express, viewing “Auslander” left me with a profoundly unsettled feeling. After witnessing the video, one can’t help but call to mind the same words with which feminist scholar bell hooks reacted to Nicki Minaj’s Anaconda video: “this shit is boring. What does it mean? Is there something that I’m missing that’s happening here?”

Of course, the intention was laudable. Rammstein tried to push a critique of colonialism. Yet, one can’t help but wonder whether form undermines function in this case and whether their lukewarm and humorous attempt to navigate an inoffensive performative pastiche has the result of retrenching more colonial stereotypes than it confronts.

A striking contrast to Rammstein’s diluted critique is a video released the same week by Icelandic band Hatari. They’re the electro-punk sensations who took the Eurovision contest by storm this year. They didn’t win, but they certainly dominated headlines, both with their unique style (a striking visual combination of leather and bondage imagery) and their ardent political statements. This year’s Eurovision was already mired in controversy over the fact its championship host country was Israel. Eurovision always takes pains to stave off politically controversial statements on the part of its participants and was doubly on the alert given the controversy of holding the championship in a country whose brutal treatment of Palestinians has drawn worldwide criticism. Performers, as always, were warned against politicizing the contest, yet Hatari did just that, unfolding a Palestinian flag at the end of their performance.

There is a vigorous debate about whether the best way to respond to Israeli apartheid against Palestinians is to boycott the country — there is a well-organized academic and artistic boycott movement — or to engage and visit Israel but try to use the opportunity to raise education and awareness. This was a question every Eurovision participant with a political conscience had to ask themselves. And while there are merits to the boycott argument, Hatari’s visit to Eurovision offered a brilliant demonstration of how artists can perform at an event in Israel and use the opportunity in positive, political ways.

In addition to their straight-forward visual statement at the end of their performance, members of their crew attended a joint Israeli-Palestinian memorial for victims of the ongoing violence (where they were confronted and spat on by angry Israelis), and produced an excellent short video out of it. The band themselves articulated their position clearly and unapologetically following their on-stage statement. Hatari visited occupied Palestinian communities, with Palestinian guides, and spoke widely about the experience. On top of it all, they snuck out of the interviews and celebrity showcases to film a stunning pro-Palestinian music video out in the desert.

The video is remarkable in all the ways Rammstein’s attempt is not. There’s nothing satirical about it — its blunt combination of anger and Palestinian pride sweeps over the viewer with chillingly powerful effect. Hatari are joined in the video by queer Palestinian artist Bashar Murad. They could have just recorded the video by themselves, but instead shared the stage with a Palestinian musician (unlike Rammstein, who dominate center-stage in their video). Murad’s singing is sensuous and beautiful and gives the entire piece a power that complements Hatari’s hard-edged synth in stunning fashion.

Murad’s lyrics are simple and beautiful — a paean to the beauty of his land, to its healing power, as well as a firm declaration of resistance to the genocide Israel has inflicted on the Palestinians. “I will not bow down. I’m steadfast / I will not bow down / I’m staying, and I won’t just disappear / I’m worthy, and I will not be erased,” he sings.

Matthías Tryggvi Haraldsson, Hatari’s vocalist, is a bit more oblique. He refers to a cold and bare “echo chamber, where isolation sounds alone / Marionettes / whose thought consists of skepticism / self-begotten, impotently shake their fists…Each one croaks upon his own.”

A reference to the impotent, self-important echo chamber of social media, perhaps, in which so many angry westerners are trapped, impotently shaking their fists at each other? It’s aptly performed as an industrial-grade duet, with the angry white Europeans lamenting their impotent, caged rage and the embattled Palestinian singer chanting a beautiful hymn to the healing landscape around him and committing to resist his own erasure there. The juxtaposition is perfect — the Europeans, with their surfeit of freedom, imprisoning themselves in a cage of their own devising; the Palestinian, resisting the real-life cages imposed by Israel and its allies, embracing and committing to his land with an authenticity born of sincere love and resistance.

Tangibly speaking, sharing the stage and equal presence with a Palestinian performer is the right way to produce a song like this; not imposing a satirical pastiche in which indigenous peoples serve as background props. Rammstein’s performance retrenches established stereotypes, with its naked women and traditional hunting and dancing. Hatari, on the other hand, by working with a queer Palestinian performer, remind us to think beyond our stereotypes. They shatter the image of Palestinian resistance as tradition-bound, as violent. Instead, we see a young, queer Palestinian man, with earrings and jewelry, enacting resistance with an open, proud sensuality that is breathtaking. It lends a double meaning to his lyrics — resisting erasure both as a Palestinian in occupied lands, as well as a queer man in the troubled political present.

It might be unfair to say that Rammstein’s use of naked women was deliberately intended to draw the (commercialized) male gaze, yet that is an undeniable outcome of their video. Hatari, by contrast, resist any temptation to add sexualized women to their video, instead relying exclusively on the sensual dancing of the video’s two male performers, Murad and Klemens Nikulásson Hannigan.

Where Rammstein fall short, Hatari provide a stirring example of how to make a politically charged video authentic and meaningful. The two videos offer a study in contrasts and speak loudly to the challenges involved in authentically confronting colonialism through popular music.