As the creator of Veep (HBO, 2012) Time Trumpet (BBC Two 2006), and In the Loop (Fox, 2007) (among other greats), Scottish writer/director Armando Iannucci has proven time and time again to be a master of political satire. Known more for using dry humor (including biting dialog and mostly realistic situations) than, say, outlandishness and slapstick to skewer his topics, his work typically requires multiple in-depth views to fully appreciate.

His latest film, The Death of Stalin, is no different. Based on the 2010 graphic novel La mort de Staline (Dargaud) by Fabien Nury and Thierry Robin—and co-written by David Schneider, Ian Martin, and Peter Fellows—the movie depicts various power struggles between various important players (such as Nikita Khrushchev, Lavrentiy Beria, Vyacheslav Molotov, Georgy Malenkov, Anastas Mikoyan, and Nikolai Bulganin) following Stalin’s death in 1953. While not as laugh-out-loud funny as it could be, The Death of Stalin is still quite laudable due to its strong performances, sophisticated writing, and most of all, ability to portray the real-life horrors of the time without ever losing its comedic appeal. It’s a bit of a shame, then, that the Paramount DVD extras are so lacking. 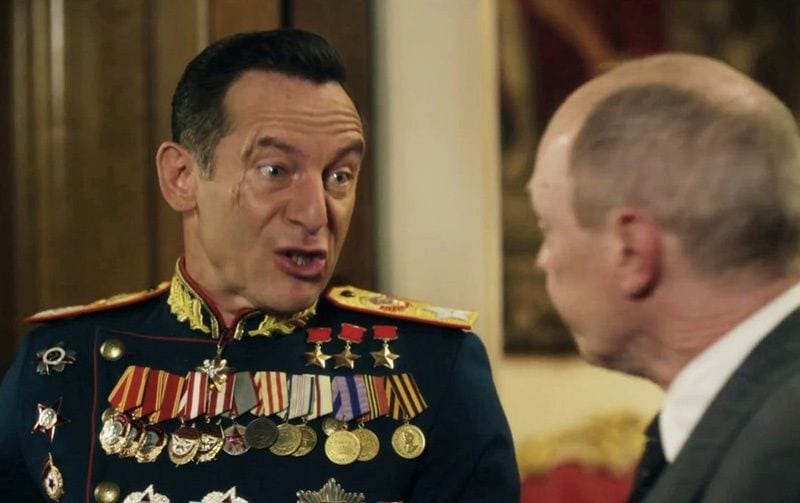 Performance-wise, every major player is expectedly strong. For example, Steve Buscemi tackles Khrushchev with his standard air of impatient deliveries and cunning action, Michael Palin is charmingly aloof yet poised as Molotov, and Jeffrey Tambor’s turn as Malenkov conjures his dual roles as Oscar and George Bluth (Arrested Development) in his compromise between silly meekness and resolute authority. Easily the standout actor, though, is Simon Russell Beale as Beria because he plays the head of the NKVD as a ruthless, if not downright psychopathic, figure who, while still amusing in his own way, would stop at nothing—and no one—to get his way. (Although Jason Isaacs and Olga Kurylenko don’t get enough screen time as Field Marshal Georgy Zhukov and pianist Maria Yudina, respectively, both are quite good as well.)

Like all great satires, The Death of Stalin treats its subject matter seriously beneath the humor; in fact, much of it could play as an earnest drama if not for the slight ridiculousness on the surface. Take, for example, early scenes in which Khrushchev mentions tossing grenades at soldiers to watch them panic, Malenkov remarks, “I’m exhausted. I can’t remember who’s alive and who isn’t,” and Beria orders the murder of a husband and wife by saying, “Shoot her before him but make sure he sees it.” (There are also multiple references to Beria abusing his power to torture and rape prisoners.) There’s certainly a very dark and subtle comedy to the ways in which these men treat their crimes against humanity as business as usual, but it’s precisely that lack of weight and concern that also makes Iannucci and company’s examination so authentic and, well, disturbing.

Of course, the film also offers plenty of lighter laughs, particularly from Rupert Friend as Vasily Stalin, whose blend of ignorance and toxic masculinity makes him react to his father’s passing with consistent absurdity. Andrea Riseborough also gets in some choice lines as his sister, Svetlana, and in general, The Death of Stalin, like prior Iannucci projects, shines most in its relentless backstabbings, one-off jabs, and attention to detail and continuity (several jokes are set up, developed, and paid off as the film progresses). It’s also worth noting how its creative licenses—chiefly, that almost no one speaks with a Russian accent—are inherently amusing as well.

As for the bonus content on the DVD, there are only two offerings: a collection of deleted scenes and a featurette entitled “Dictators, Murderers and Comrades … Oh My!” The former is funny enough, with some excerpts that would’ve fit fine within the film and others that wouldn’t, but none of it feels like a real loss. Likewise, the latter consists mostly of the cast and crew discussing their roles and the history behind the movie, but at only 11-minutes in length, it barely scratches the surface of what happened behind-the-scenes (so some viewers may be disappointed).

The Death of Stalin is rarely out-and-out hilarious, but the performances are top-notch and the writing is thoroughly witty, entertaining, and thought-provoking. It evokes aspects of Schindler’s List (Spielberg, 1993), The Producers(Brooks, 1967), Veep, and Monty Python in its mostly successful quest to make viewers laugh and learn about a truly horrific period in world history. As such, it’s a great effort from all involved and another testament to Iannucci’s unwavering craft.