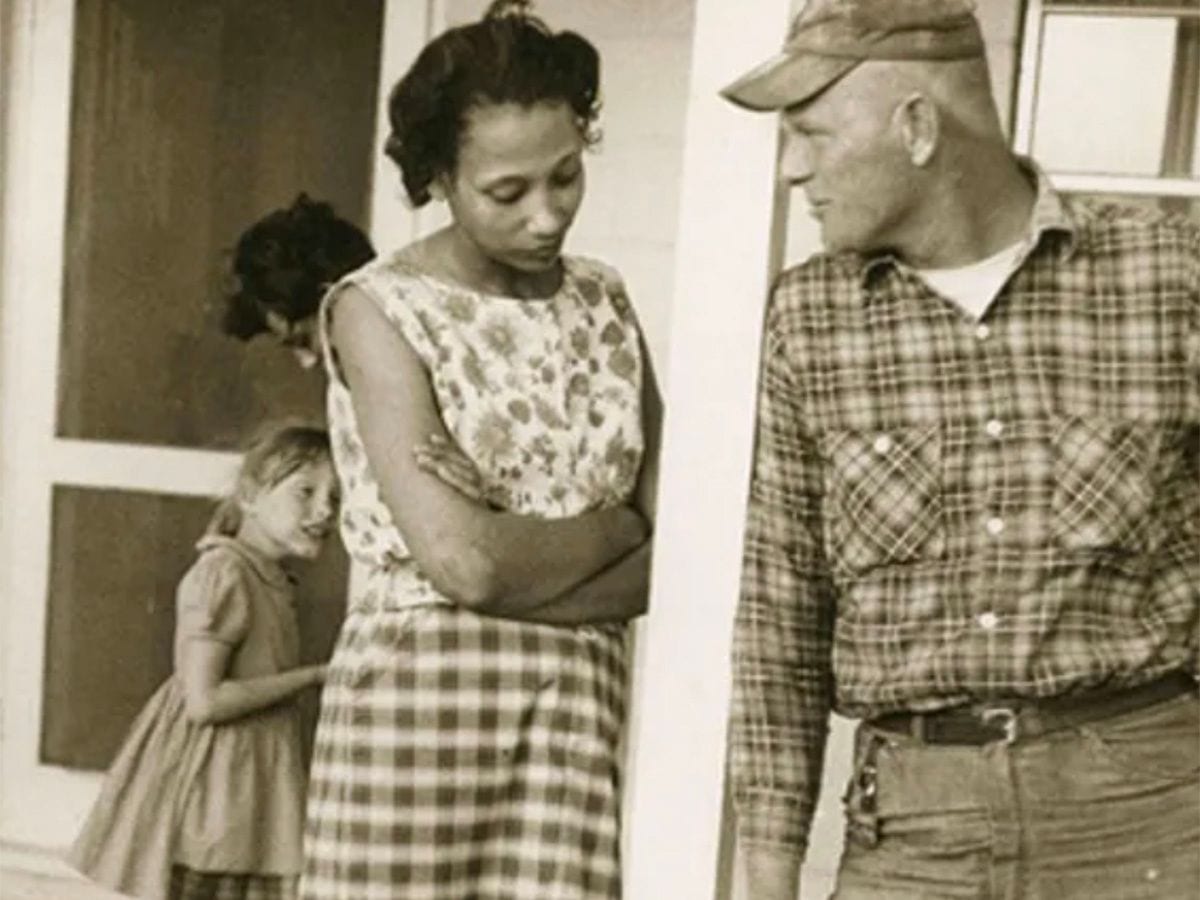 “It was about 2AM and I saw this light, you know, and I woke up, and it was the policeman, standing beside the bed.” As Mildred Loving remembers the night of 14 July 1958, you see a bright light on screen, a flashlight hovering in the dark. “He told us to get up,” she goes on, “And we was under arrest.”

The shot cuts to a close-up of Mildred’s husband, Richard, looking into an interviewer’s camera and then telling the story too: “They came one night and they knocked a couple times. I heard ’em, and before I could get up, you know, they just broke the door open and came on in. When we got up they were standing by the bed, with flashlights.” Mildred remembers the sheriff asking who she was: “I said, ‘I’m his wife, and the sheriff said, ‘Not here, you’re not.'”

The frame in The Loving Story cuts to headlights on a road at night. The Lovings were arrested that night, in their home in Caroline County, Virginia, then convicted of felony charges for violation of Virginia’s Racial Integrity Act of 1924. In 1958, similar laws remained in effect in 21 states. Their one-year prison sentence was suspended, provided they agreed to be banished from the state.

Premiered on on HBO on 14 February [2012], Full Frame founder Nancy Buirski‘s film follows the story of the Lovings, whose case went to the Supreme Court in 1967. For the Lovings, it was a simple-seeming decision: they wanted to be able to live where they wanted, raise their children, and be together. 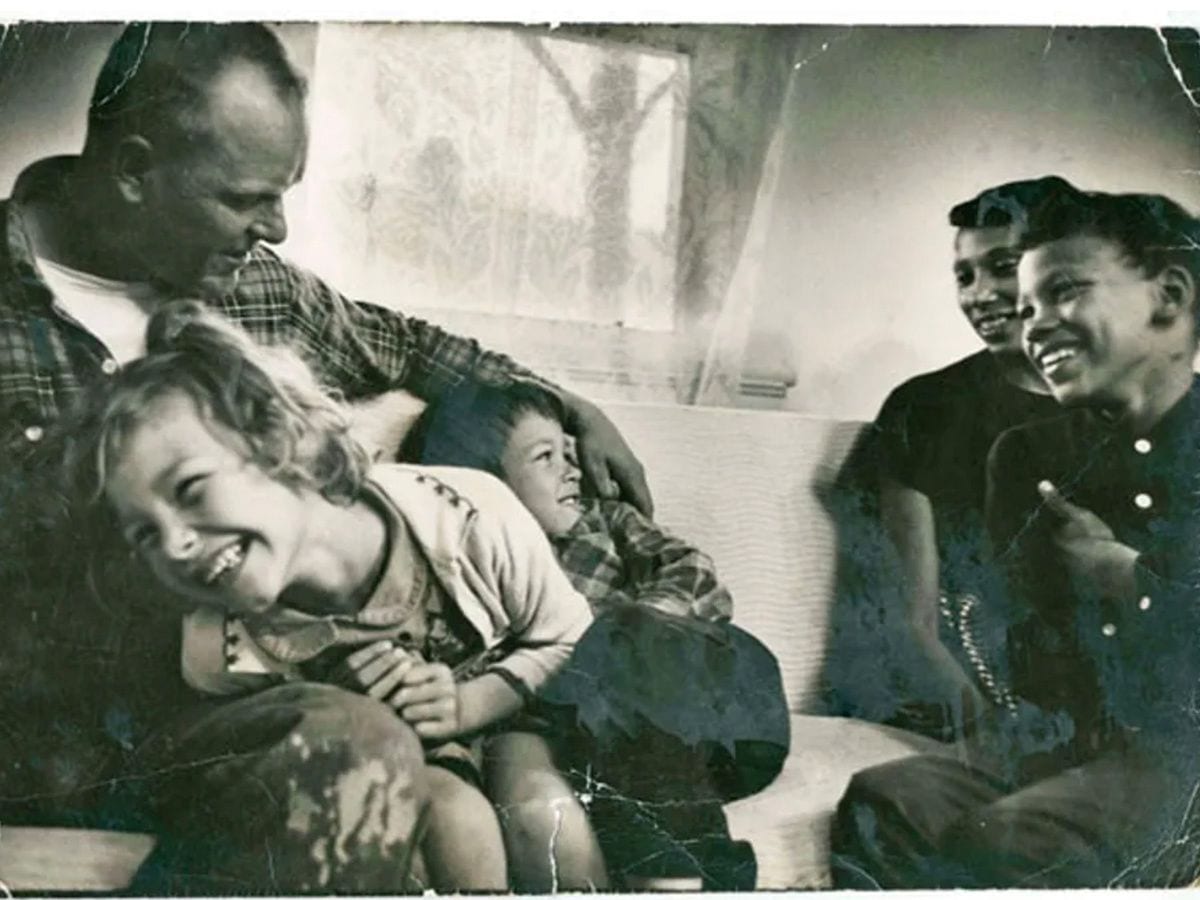 For some time after the arrest, they tried living in Washington DC, where they had been married in June 1958. “Aside from the fact that she had been banished there,” says Mildred’s brother Lewis Jeter, “That she was told you can’t live with your husband in Virginia, she never really adapted to city life.” Archival shots of DC show kids playing on sidewalks. In the background are boarded windows, a barber shop window with a “Money Orders” placard in it, and dogs are sniffing around a truck. In another context, these images would seem innocuous, impressions of daily urban life. But here they indicate the lack of “room” Jeter describes, as well as his sister’s resistance to the city.

This sequence is typical of how The Loving Story does its work. While the film includes recent interviews with relatives and the Lovings’ lawyers, Bernard S. Cohen and Philip J. Hirschkop, more often it’s evocative, offering photos and footage to indicate how the Lovings lived, how their kids played, and how their lives changed — and didn’t change. These images are comprised mostly of 16mm footage shot by Abbott Mills for Hope Ryden in the 1960s, for a film that was never made, as well as photographs by Life magazine’s Grey Villet.

These images — Villet called them his ” psychographs” — grant the documentary an unusual sort of intimacy, even as it recalls a remarkable historical event. Interviews with the Lovings and their family suggest their commitment to one another and their basic rights. Sometimes these clips reveal as much about the reporters’ attitudes toward their subjects’ as the subjects themselves.

Following a photo that shows Lola Loving, Richard’s mother, almost smiling on the porch next to her son and his wife, the film cuts to a male reporter holding his microphone up toward Lola Loving, standing in an overcoat outside a plain wooden house. Her face lined, her hair tightly braided beneath a scarf tied under her chin, she looks down toward him as he asks how she feels about the marriage and the children. “They seem to be very happy everywhere,” she says about the children. “I’ve been in the home, they’re happy, I’ve been in the car with ’em, they were happy.”

A rooster crows in the distance, as if to complement the country-style fiddle on the backing soundtrack. The reporter tries again. “What is it like being the mother of a fella who grows up and kind of, as we all do, wants to go his own way?” She sighs, “Well, I don’t know.”

The Loving Story provides a series of contexts for the Lovings’ decision to marry and then to pursue their right to do so. They grew up in an underclass rural area where communities mixed daily. Richard drove a car in local drag races, a car he maintained with the help of his best friend, Raymond Green. A photo shows them leaning over an engine, a black man and a white one engaged in a wholly mundane activity.

Despite the common occurrence of community mixing, the white deputy sheriff at the time, Ken Edwards, submits that Richard knew that interracial sex was a “no-no” and that he must have kept it “hidden”. Another photo shows Richard and Mildred kissing, outside and unhidden.

The film offers subtle and overt commentaries by such juxtaposition, revealing the tensions the Lovings might have felt, as well as their determination to do what they saw as the right thing. The well-known historical “Climate” (as the film titles it) that is, the fear of miscegenation, is sketched in interviews and familiar images: a scene showing Gus and Little Sister in Birth of a Nation accompanies historian Edward Ayers’ observation, “Segregation from the very beginning was fundamentally about sex.” In an archival interview, a white woman proclaims the self-righteous end of such laws: “I’m proud of being white because I am what my white race has made me.”

While Ayers notes the “irony” of this case being about sex. Getting at the heart of post-Civil War segregation, Peggy Loving notes her father’s attitude, which is less about the broad context and more about his character: “When he put his mind to something,” she says, “He was gonna do it.” The case made its way through the legal system following Richard and Mildred’s decision to write to Attorney General Robert Kennedy in 1963. “He said there wasn’t anything he could do,” she says, “But to write to the ACLU.”

This led to their collaboration with Cohen and Hirschkop, who do most of the talking then and now (Richard Loving was killed in a car accident in 1975 and she died of pneumonia in 2008). When they saw that the original trial judge, Leon Bazile, had ruled on the basis of an 18th-century definition of race — “Almighty God created the races white, black, yellow, Malay and red, and he placed them on separate continents. The fact that he separated the races shows that he did not intend for the races to mix.” — the attorneys saw their opening and pressed forward.

The film shows Loving v. Virginia also hinged on sex, or more precisely, in Virginia ADA R.D. McIlwaine’s formulation, the product of mixed race sex. “I think what the Attorney General did was immoral, in the way this case was prosecuted,” says Hirschkop, looking back. “That children of mixed marriages suffer, because they knew the whole purpose of the statue was to preserve racial integrity.” He and Cohen argued that marriage is a basic civil right, and the Court ruled against anti-miscegenation laws: “There is patently no legitimate overriding purpose independent of invidious racial discrimination which justifies this classification.”

The Loving Story‘s tale of this victory lays out both its legal and moral import, and then turns back to the Lovings. While the Court is deciding, they shop at the supermarket. After the verdict is announced (Huntley and Brinkley do the honors here), the film shows the Lovings looking awkward and glancing at one another during a small press conference in their lawyers’ office.

At the film’s end, they’re back home, looking much as they looked at its start. Their young son Donald clambers after a frog in the back yard. At the kitchen table, Peggy flips through a paper dolls book, complete with a wedding featuring a white husband and wife.

Editor’s note: This article originally published 13 February 2012. We’ve updated it and republished it today, for the Loving’s story is a love story, and it will always be an important part of America’s story. Love wins.

At this writing The Loving Story can be watched on HBO streaming.