Most people would never buy a thing from Howard (Adam Sandler), the motor-mouthed star and scourge of the Safdie brothers’ Uncut Gems. But then he isn’t interested in most people.

A jeweler whose primary line appears to be selling gem-encrusted gee-gaws to rappers and athletes, he deals primarily in myth-making when not indulging in mischief. He has a good line of gab, Howard, but what he does best is what every true operator understands: Just keep talking, never stop moving, and keep those plates spinning.
Uncut Gems is an exhausting movie about an exhausting character, shot through with an intoxicating restless relentlessness powered in large part by Sandler’s ferociously hungry performance.

Howard works in the Diamond District, that anachronistic tangle of rattletrap offices and storefronts in midtown Manhattan. Unlike many of the sleekly minimal financial offices stacked in the high rises towering overhead, through which transactions blitz at the speed of light, in the District the decor doesn’t appear to have been updated since 1972 and the haggling marketplace vibe is timeless.

Since the gems being traded are not items of intrinsic value, being for the most part just pretty stones, the transactions are in large part about storytelling: The ones being spun by the dealers and the fantasies spinning in the customers’ heads. When
Uncut Gems kicks in, Howard is in the process of telling a story, and it’s a whopper. 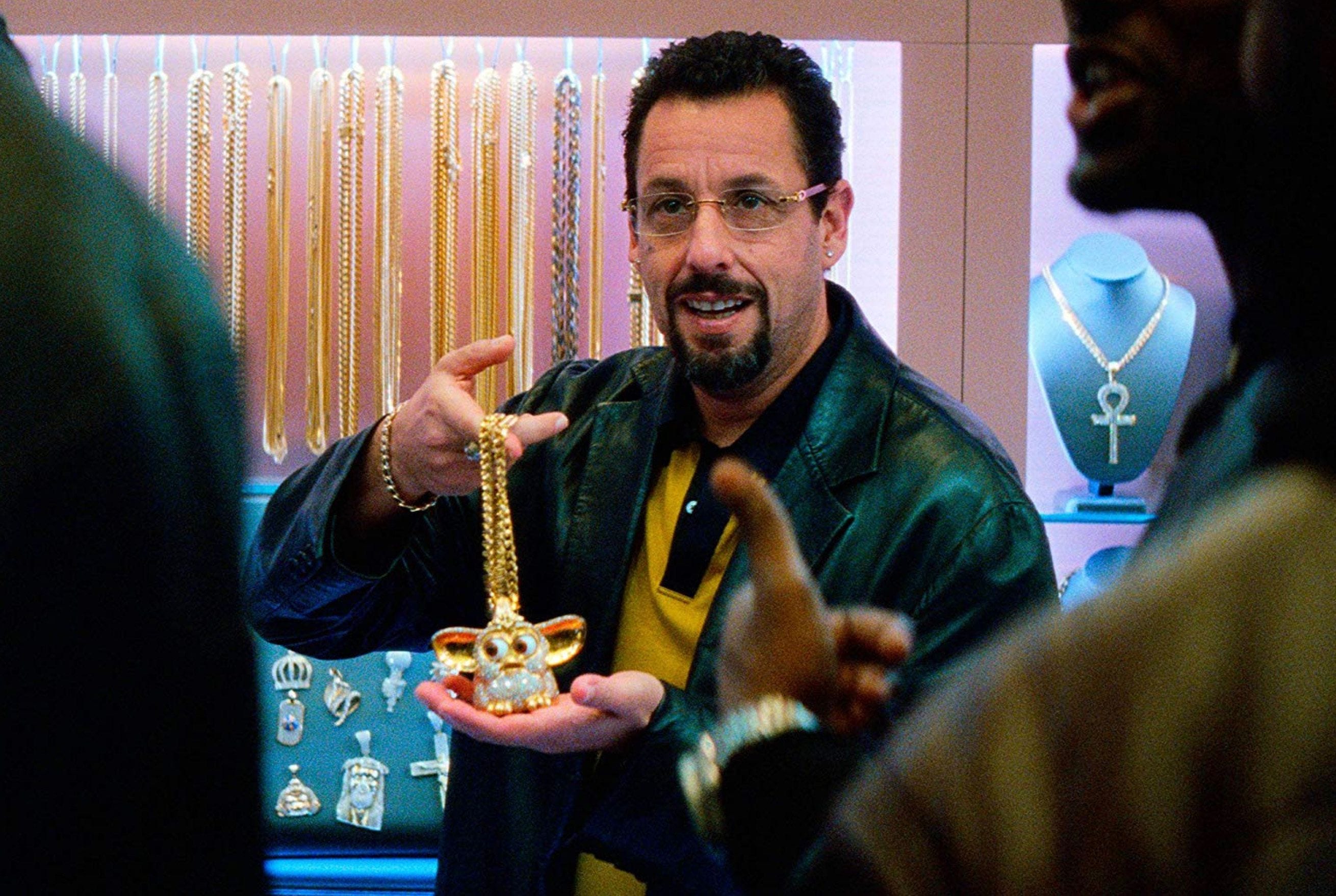 He has just taken receipt of a lumpy and rare stone, studded with colored gems, shipped over from the darkness of an Ethiopian mine whose timeless heave and hustle opens the movie. Like any good dealer, Howard already has a buyer lined up, the guy who just walked into his shop: Boston Celtics forward Kevin Garnett. Towering over his entourage in Howard’s cramped showroom, Garnett seems at first looking maybe to blow pro athlete money on something shiny. But he’s not particularly interested in anything.

That is until Howard, whose inside man in the entourage Demany (LaKeith Stanfield, edgy and watchful) has hooked Garnett into coming, starts telling Garnett the story of the rock. Quieting down for a keenly observed few moments of hushed intensity, Howard spins a tale of seeming honesty about a documentary he saw about the plight of black Ethiopian Jews making poverty wages working in the mines and how that lead him to the rock. Once Garnett’s eyes hit upon the rock itself, it’s as though his soul is on fire. The Celtics are powering their way into the 2012 NBA finals and Garnett—alert as many athletes are to signs and portents—is looking for that charm that can help put him over the top.

Only in Howard’s world, nothing is that simple. From that moment of deft salesmanship, in which Howard uses the rock’s origin story to suggest a subtle linkage between his Jewishness and Garnett’s African heritage, Uncut Gems spins into a kaleidoscopic frenzy of greed, paranoia, grandiosity, and steadily encroaching violence. Howard’s ever-buzzing brain will not let him make one deal when he can launch four-and-a-half linked side hustles with fifteen broken promises between them. This is the kind of hyperkinetic bustle that the Safdies specialize in.

Because of Howard’s inability to follow a line from A to B without pitching a deal to C through G along the way, selling Garnett the rock ultimately involves Howard placing ludicrously specific bets with a bookie, sports radio phenom Mike Francesca, working a jagged seam of patter and bringing some Long Island verisimilitude to the movie. He gets his father-in-law (Judd Hirsch) to pretend to be bidding for the rock at an auction house that Howard already promised it to. He pawns Garnett’s jewel-encrusted Celtics ring, and trying to avoid the dead-eyed mooks accompanying his brother-in-law Arno (Eric Bogosian), whom Howard just might owe many thousands of dollars he has no intention of ever paying back.

At the same time, Howard has to make sure that neither his wife Dinah (Idina Menzel) or girlfriend/assistant Julia (Julia Fox) walk out on him. Through all this turmoil, he still manages to get along with everybody at the blowout Passover dinner that serves as a brief cease fire amidst Howard’s deal-cutting and excuse-making. 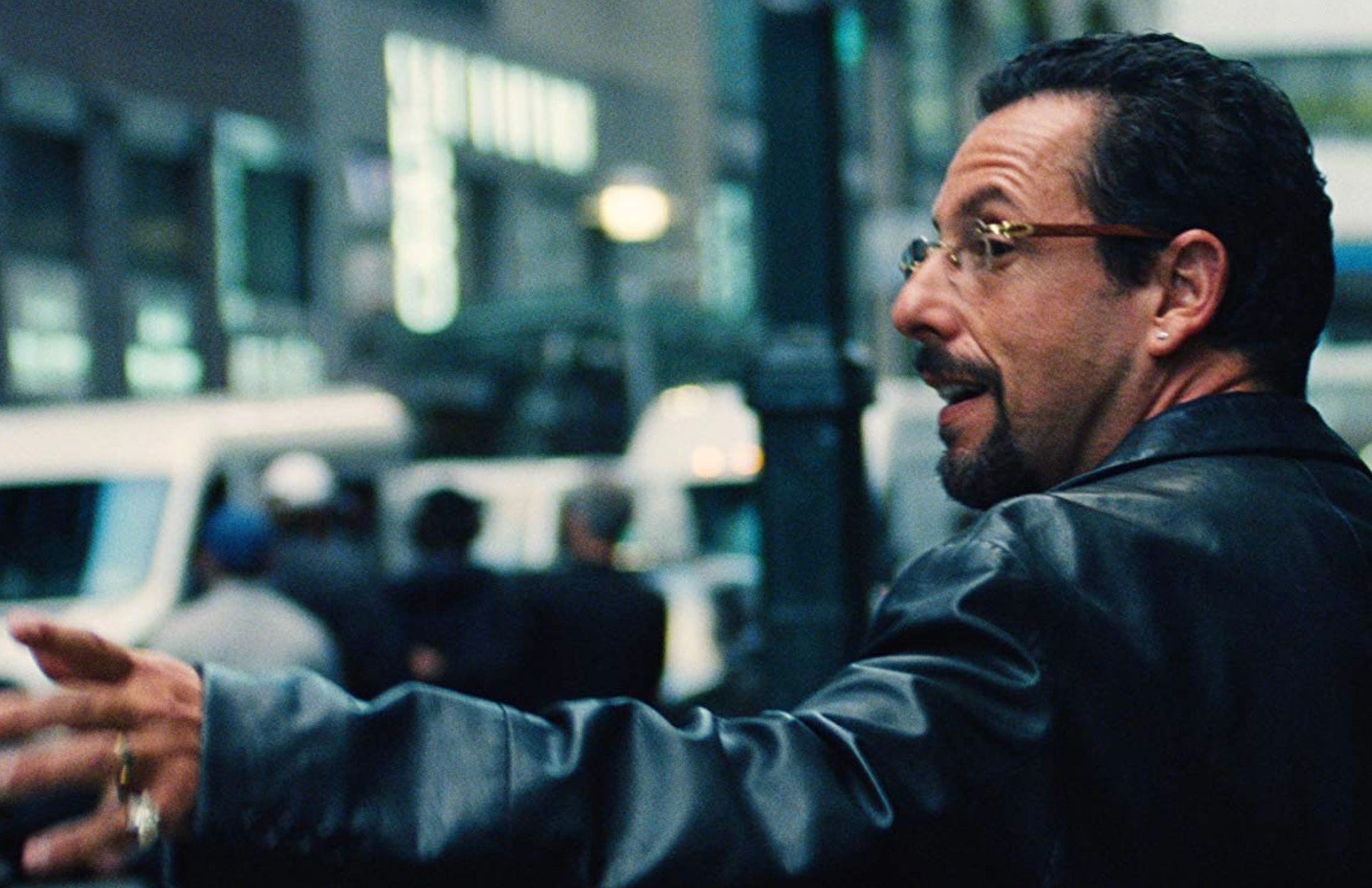 The hurly-burly that the Safdies cook up for Uncut Gems is not unlike the tripped-out night journey that they blasted Robert Pattinson through for 2017’s scuzzball noir, Good Time. Rather than the far ends of the boroughs, though, this time they put their star through his paces in the claustrophobic clamor of Midtown, where lusciously decadent nightclub scenes jut up against daytime workaday commerce.

Shot by Darius Khondji with a gritty and grainy filter, the movie’s look both highlights the tension inherent in all the story’s intense face-offs and paints it all with a curiously sweaty glamour. In some ways, this is Treasure of the Sierra Madre in the big city, with glory, riches, and survival driving everyone over the edge as it bounds and scurries from one tightly-stitched and explosive set piece to the next.

As an actor, Sandler often tends to volley from quiet irony to blow-out mania without much of an in-between. In this role, however, he underlays Howard’s slick salesman patter and backslapping camaraderie with a not-so-well-hidden layer of mania. Although Howard regularly bursts out into panic, either faked in order to get out of a jam or sincere when he thinks he’s about to lose out, it’s less Sandler flipping a switch than his dialing up the frantic hunger and terror that’s always there. While an excellent piece of acting, easily the best of his career, it curiously looks best when paired with the loose and eager-eyed Garnett, who plays himself with a winking ease that is far more skillful than it may appear.

A masterful, damn-the-torpedos screw-tightener from a bold pair of American filmmakers, Uncut Gems could either be a portent of great things to come or the best they have to offer us.