Fascism has gripped the contemporary imagination again. No longer a historical phenomenon, or one confined to a few easily-avoided corners of the globe, the evil of totalitarianism is on the rise again, extending its tenacious tentacles and testing the will of freedom-loving, democratic society to resist. While the politically savvy still try to deny or downplay the fascist resurgence, the literary world seems to have a much clearer sense of what’s happening, and this is reflected not only in new and vital contemporary works but in a renewed interest in the literature of our 20th century predecessors’ struggle with this “radical evil” (as philosopher Hannah Arendt referred to it).

If the new translation and publication of Anna Seghers‘ 1942 classic, The Seventh Cross, is a reflection of today’s growing interest in the previous century’s struggle against fascism, it offers a glimpse of Nazi Germany less commonly told. One of the first books to lay bare the reality of Nazi concentration camps—Seghers, a Jew and a Communist, fled Nazi Germany, helped get her husband out of a concentration camp and then barely escaping Nazi-occupied France herself—it concentrates on the persecution and concentration camp experience of German political prisoners (not Jews). The book opens with the escape of seven prisoners from a concentration camp located in rural Germany (this long before the full-scale ‘world war’ had broken out; Germany is still at relative peace with most of its neighbours, which makes the rise of its own internal totalitarianism all the more chilling), and follows their efforts to survive, evade the authorities and escape the country.

As Thomas von Steinaecker observes in a useful afterword, the genius of the piece lies in its complex and wide-ranging narrative. It’s not a straight-forward escape story, but pauses and moves around, offering snapshots from the lives of its enormous cast of characters as a way of illustrating the reality of life under a fascist regime. The characters themselves provide an opportunity for the author to illustrate all the various complex ways in which human beings respond to living under totalitarianism, and to the difficult choice they are faced with when asked to help escaped detainees against whom all the machinery of the police state has been mobilized. Will they succumb to fear and turn them in? Or shamefully turn their backs on them? Or do the right thing and help them?

The multitude of characters in the novel — old and young, urban and rural, intellectual and simple, left and right, hard workers and lethargic shirkers, professional artisans and factory workers, housewives and prostitutes, shepherds and soldiers, mayors and bartenders, sailors and doctors, and so many more — demonstrate all the many responses humanity is capable of in the face of tyranny. Some characters simply shut out what’s going on around them. Others rage inwardly, but outwardly cower. Some will help the escapees; others will betray them. Some will betray them because they believe in the totalitarian rule of law; others because they’re simply afraid, despite their personal sympathies. Others still will risk anything to help their former comrades. Nor are these one-dimensional characters: some start out as cowardly apparatchiks, but gradually rebel and develop the courage to resist. Others go the other way, starting out as defiant rebels but gradually losing the will and the energy to fight. There’s an enormous cast of characters in this lengthy novel, and each of them is constructed as complex, multi-dimensional and integral to the author’s goal of exploring the varied aspects of human psychology under totalitarianism.

Stylistically, Seghers deserves a place among other great novelists who turn their texts into something more than mere narratives; into something verging on the epic. Her writing is reminiscent of the Icelandic writer Halldor Laxness in this regard. The book sometimes reads like a fairy tale, panning from the life of a harried factory-worker in the city to the inner thoughts of a shepherd playing with his dog high up in the mountains. There’s a folksiness to the novel; a simplicity of storytelling in spite of the high literary language. The many twists and turns the novel takes are never distracting—they all prove not only entertaining and illustrative of German life in the period, but also ultimately bear some relevance to the primary narrative—but the author’s expert pacing keeps the suspense of the escape storyline moving as a constant backdrop, even as she offers these beautiful vignettes and stories along the way.

The Seventh Cross is an exercise in genius on several levels. It’s not easy-going: it’s high literature, with all the complexity that entails. The language is artfully constructed; not abstract or poetic, but with a density appropriate to illustrating a very specific time and place: a Germany torn between tradition and modernity; decency and fascism; bucolic peace and Orwellian total war.

What’s important to recognize is that the story is not, primarily, about the escapees. They’re important, insofar as they illustrate the experience of the concentration camp — how it wears down human hope and identity, and how this juxtaposes against the breath of freedom the men achieve when they escape. But more important than this are the cast of secondary characters, for they illustrate the myriad responses of everyday Germans to the experience of life under a totalitarian regime. How do decent people become complicit with tyranny, totalitarianism, genocide? They do so in ways both easy and complex, Seghers reveals.

There are the young adults, eager to please and show their loyalty to the regime they were raised under, who only gradually sense the lack of enthusiasm of their elders, as expressed through a sad, diverted glance here; an awkward silence there. The parents know how far their society has fallen. All of them harbour the hope of resistance; the notion that the regime can’t last for much longer, surely; they hope that if they just get through the next few years, normalcy will return. (How many citizens of how many countries feel that way today?) The former activists and decent, community-minded citizens go about their days awkwardly ignoring the ties that formerly did bind; each of them wonder whether the others would still be trustworthy if called upon to help as a comrade; each of them hopes they’re still on the same side, still decent people deep down; but each of them are afraid to put their hopes to the test.

Some of them do jump at the chance to regain their lost sense of civil decency, by helping the escapees. They know that only in risking their lives can they redeem themselves, and feel human again. Others continue to turn the other way, or worse yet betray each other, terrified that to do otherwise would cost them their lives and those of their families. Some of them have already experienced a taste of prison camps, and they would rather sell their souls than return to them; but having sold their souls, they discover life is no longer worth living, and kill themselves anyway. 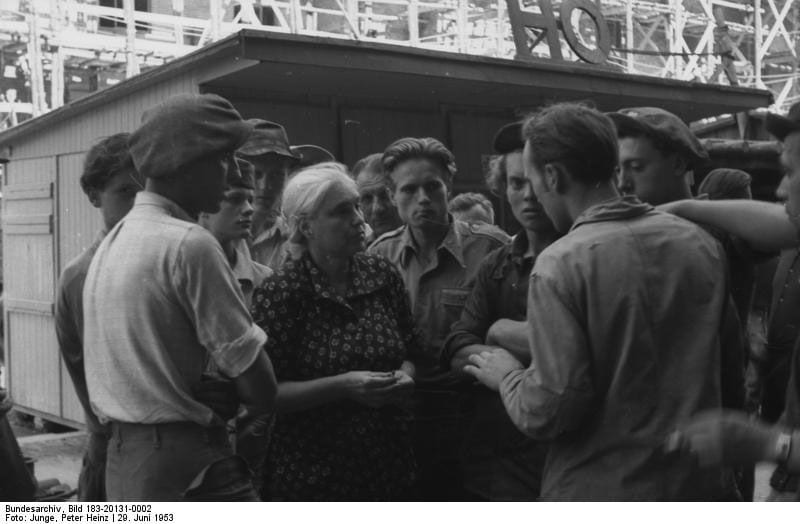 The great achievement of Seghers’ work is its illustration of the slow, grinding rise of totalitarianism, which has caught everyone by surprise; and the different pulls it exerts on individuals’ spirits and capacity to retain their sense of human decency. She even humanizes the concentration camp guards: they remain ignorant, vile and violent brutes, but she helps us understand what made them that way. Totalitarianism has spread like a slowly rising flood: at the first sign of floodwaters everyone was hopeful that the flood could be averted, but the waters continue rising imperceptibly, until gradually they permeate everything.

ASeghers’ later career offers plenty of food for thought. After the war she returned to what became East Germany, where she was celebrated as a leading literary star until her death in 1983. What led to the willing acquiescence of a writer responsible for one of the greatest works of anti-fascist literature, with a regime that itself embodied so many traits of the totalitarian state she had written against? She was castigated by her West German literary colleagues for even refusing to speak out against the construction of the Berlin Wall in 1961. She had always been a Communist; did she believe the East German state was a progressive enough venture to ignore its ruthless totalitarian elements? Was it the lure of her stature and prestige, after so many decades of harsh struggle, which kept her silent in later years?

Regardless, her book—written long before this point, during the epic struggle against mid-20th century fascism and following her own family’s ensnarement within the concentration camp system—continues to stand as a key anti-fascist text. It is nonetheless ironic that Seghers herself may have shifted in later years from her wise authorial vantage-point, to assuming the imperfect identity of one of the silent collaborators she depicts in her own novel.

Still, the novel was the product of a specific experience at a specific moment in time, and as such it continues to afford an important and essential glimpse into the never-wholly-extinguished totalitarian moment, and the psychology of life under a fascist regime. I would disagree with von Steinaecker’s otherwise compelling afterword (written in the year 2000, so before the popularly known rise of today’s proto-fascists) on one key point. “The Seventh Cross is above all not a book with a message, but rather… a brilliantly written novel that keeps alive one of the most important chapters of German history in a style that is both entertaining and challenging,” he writes. This is exactly the wrong way to interpret this book, for it is a book with a message. Today this work is perhaps more important than ever, a stark warning to remain alert for the moment our own thinking begins to turn toward an accommodation with the creeping rise of totalitarianism around us. How long would each of us retain our own civil courage, and how would we choose to exercise it? The Seventh Cross reminds us that far from literary historicism, these remain urgent questions for our time.