Natalie Portman doesn’t show up in Vox Lux, Brady Corbet’s new film, until halfway through, yet it’s her meatiest role since the brilliant Annihilation earlier this year. She’s an increasingly versatile actress, known for fraught, melodramatic performances in films like Darren Aronofsky’s Black Swan and Pablo Larrain’s Jackie — and in Luc Besson’s 1994 Léon, the Professional when she was just a child — and so the maximalism here, culminating in a frenzied pop music performance, isn’t as startling as it may be for another, less accomplished performer.

Corbet, once a young actor, uses this one-of-a-kind star power to his full advantage. Vox Lux is vast, self-consciously pretentious and biting in its critique of celebrity and the modern world. But it’s also funny, both in an over-the-top and a cynical way, which is what saves it from being just another insufferable actor-turned-director ego trip. The film’s opening scene is unrelentingly brutal, but there are just as many scenes of slapstick savagery, led by a powerhouse Portman who, yes, also has a strong sense of humor. (Fans of her famous Saturday Night Live rap video already know this to be true.)

Still, her character’s absence in the film’s first half proves just as important. Set in Staten Island at the turn of the millennium, Vox Lux opens on a school shooting where a teenage boy targets a teacher (Maria Dizzia) and her students with an assault rifle. One of the students is Celeste Montgomery (Raffey Cassidy), who remains calm until she’s shot in the neck. Amid the (all-too-familiar) horrors of losing several classmates and teachers, Celeste recovers in the hospital, attending physical therapy and rehearsing a song with her sister, Ellie (Stacy Martin), that she plans to perform at a memorial service for the other survivors. At the service, her voice is pretty but unremarkable (even she admits her sister’s voice is better), and yet the precocious performance goes viral and attracts the attention of a manager (Jude Law, hilarious), who wastes no time grooming her for pop stardom.

Admittedly, there is something about Celeste, a quality that the narrator (Willem Dafoe) eloquently ascribes her success to. Cassidy, an English actress best known for her role in Yorgos Lanthimos’s The Killing of a Sacred Deer (2017) internalizes this quality phenomenally well, playing Celeste close to the chest but with an assuredness that captivates everyone in the room. It’s clear that, on some level, Celeste is still very innocent (she comes from a religious family and community), and yet there’s no doubt, once her fame and fortune begin to rapidly accrue, that she isn’t at all helpless. She’s a shrewd, smart businesswoman, impressing her manager and her publicist (Jennifer Ehle) with her self-awareness and candor. Before long, she, Ellie and the manager churn out songs and videos and go to party after party, doing drugs, hooking up and reaping the full benefits of the pop star life.

And then, somewhere along the way, the facade crumbles. It’s 2017, Celeste (now Portman) is 31, and all that glitters seems to have gone from the world. It’s at this point, too, that Vox Lux becomes somewhat of a parody. Celeste never goes as far as to acknowledge the camera, and yet her performativity and pained vulnerability recalls salacious documentaries of famous musicians and celebrities. Stardom has already become a hot topic this movie season, but unlike Lady Gaga in Bradley Cooper’s A Star is Born‘s (2018), Celeste is anything but graceful in the public eye. If HBO’s VeepVeep is the mordant, bitter answer to earnest political dramas of the past, Corbet’s Vox Lux attempts to do the same with the familiarly tumultuous tale of pop stardom. And yet it can’t be classified so easily; it’s also seemingly earnest in its championing of Celeste, if only because she’s the one who commands the screen. Dealing, as it does, with horrific acts of violence in conjunction with gaudy wealth and fame, the film may not complete the cycle on all of the themes it sets in motion, but the effort is worthy of praise.

As Celeste prepares for her comeback tour following a stint in rehab, a group of terrorists shoot up a beach in Croatia. The tragedy has nothing to do with Celeste in particular, except that the shooters happened to be wearing outfits similar to one she wore in one of her popular music videos. The topic inevitably comes up in a press conference, and Celeste does her best to balance raw indignation with her own practiced brand of nonchalant rebellion. She comes off as intimidating and confrontational, and yet inklings of her charm shine through. Here, the performance Portman gives is appropriately grandiose but also precarious. Celeste rambles, in her flashy New York accent, with a mania one might attribute to drugs or mental illness, and Portman’s ability to switch on a dime between competing emotions pushes the character’s indecipherability into the stratosphere. By tying the shooting in Croatia to the earlier shooting of Celeste’s youth, Corbet (who also wrote the film) seems to be making a point about trauma and celebrity, the implication being that stardom, often seen as the exalted dream of escape, is in reality a lonely cage that offers no real escape.

Not that any of this hasn’t been said in works of art before. Pop music and Hollywood are as famous as they are inescapable, and a condescending opus against the industry wouldn’t be an appealing message in and of itself today, where nuanced discussion surrounding celebrity and capitalism already thrives. Vox Lux is rather vicious in its treatment of pop, but in the end it, too, allows for unbridled spectacle.

After taking drugs with her manager (still Law, after all these years), Celeste has a breakdown before the hometown opener to her upcoming album tour. In attendance are her sister (still Martin, for some reason), who is beaten down after years of abuse from Celeste, and her daughter, Albertina (Cassidy recast in a more naturalistic mode). Even after the breakdown, she takes the stage and puts on a lively show, singing empowering songs (written by the real pop star, Sia) with intense choreography and channeling a fearless spirit. After a while, her sister and daughter relax and begin to dance. Are they submitting, or just forgetting? 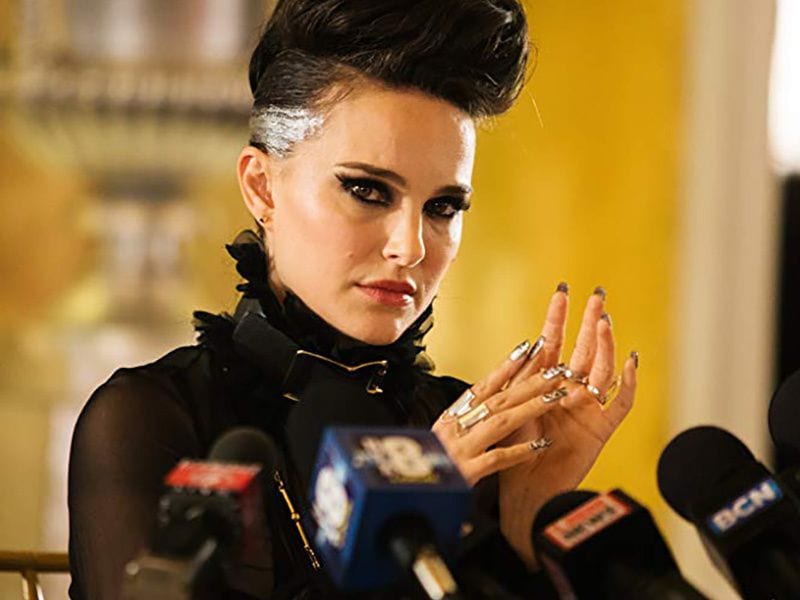