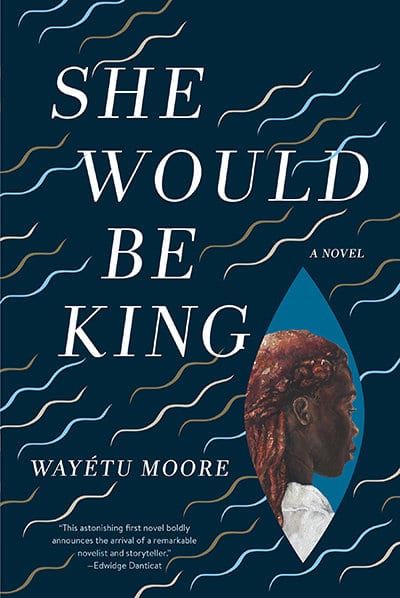 She Would Be King
Wayétu Moore
Graywolf Press

Wayétu Moore‘s debut novel, She Would Be King, is an astonishing feat of storytelling. Moore leads readers through an expansive and magical retelling of Liberia’s cultural and social history. Throughout she challenges the historical record to demonstrate fallibility as the nation both resisted and supported oppression and marginalization of its own people. Likewise, her characters are antiheroes whose errors only develop their fortitude.

The story is told from the perspective of three primary characters, Gbessa, Norman Aragon, and June Dey. Each is equipped with a powerful ability that’s equal parts emancipating and a curse. It’s only when they merge their powers do they realize that strength lies in solidarity. Here Moore establishes a resounding parable for contemporary society. She Would Be King ranges from detailing the quotidian to historical transformation all the while relying on magical realism to create chimeric energy.

She Would Be King moves beyond dominant narratives to verify Liberian history and explore ethnicity construction. Moore skillfully incorporates indigenous history and myth to illustrate resistance and acquiescence to colonization. Her consideration of inter-tribal relations reflects a bottom-up history centralizing the value of tribal life, culture, and social contributions. The novel’s primary antagonists are colonialism’s covetous history and the horrors of human trafficking. She’s also rightfully critical of the American Colonization Society (ACS) founded by Quakers whose opposition to slavery led to advocating for freed slaves to return to Africa. The history of the ACS is often considered a shining point in America’s shameful history of slavery but the ramifications are rarely critiqued. Moore, however, does critique as she deftly enshrines historical nuance to establish She Would Be King as an intelligent dissenting voice.

Moore’s adroit deconstruction of larger historical narratives serves to complicate absolutism and hero worship. For example, in the newly established Monrovia, black settlers employ servants in a system erasing identity while exalting oppressive social norms. The settlers are complex figures; they build Monrovia to reflect their ideologies as freed peoples, but they also beget a system of servitude reflecting their experiences in American slavery. In doing so, social norms are established and enforced.

Gbessa bears the brunt of the perverse and imposing normality. Her hair, wound in a “long braid that ended at Gbessa’s thighs” (178), is determined unacceptable and must be cut. The forced augmentation of Gbessa’s body is representational of a societal control still foisted onto women. Moore leans on Gbessa’s narrative to demonstrate societal oppression and hegemonic control. Seemingly, Norman and June Dey do not undergo extensive criticism. They accept their duty to protect the tribal kingdoms from French and British traders without question or consternation. Undoubtedly, this is Moore’s statement on gender and the disproportionate scrutiny cast onto women of color.

Moore integrates an imaginative element of magical realism juxtaposed to Liberia’s real history. The novel and Gbessa’s narrative is inspired by a traditional Vai myth concerning a woman who killed her cat and subsequently killed herself. Gbessa is born during the woman’s death. Gbessa is then cursed with immortality and ostracized as the village witch. She feels pain, succumbs to violence, but is always resurrected. June Dey, born on a plantation in Virginia, is gifted with phenomenal strength. His body is so resilient that “each time he was struck his strength grew” (85). Finally, Norman Aragon, born in Jamaica to a British colonizer and a Moore Slave, becomes invisible at will. Individually their powers are useful but it is only when they come together do they realize their abilities are capable of changing Liberia’s future. Moore integrates magical realism to underscore the parable exhibiting the value of fellowship. She provokes readers to wonder how drastically history would be altered if individuals were endowed with supernatural gifts or more simply, able to work collaboratively.

Gbessa, Norman, and June Dey all contend with balancing alienation against a desire for community. June Dey’s and Norman’s closest human connection prior to forming their bond was only to their mothers. Gbessa’s entire narrative is driven by her outsider status, first as a village witch, then as a servant who married into aristocratic Monrovian society. Norman and June Dey are comrades in gift and spirit but Gbessa refuses to join or even acknowledge their connection. Of the three characters, Gbessa is the most uncomfortable with her power even though “alike spirits separated at great distances will always be bound to meet” (147).

It’s only towards the last 20 pages that Gbessa finally accepts her identity and finds resolution after decades of tumult. This is where She Would Be King delays in producing consolatory character development. Gbessa admits she lost herself to Monrovian high society but her marginalization significantly outlasts her emancipation. The novel ends and readers realize she is a changed character but are not given the satisfaction of knowing the person she becomes. Perhaps the author is signaling for a sequal.

Beyond the value of Moore’s storytelling, She Would Be King ignites an authentic and imagined history of Liberia. Gbessa’s, Norman’s and June Dey’s victories and toils serve as a parable for subverting oppression while trumpeting the power of partnership. An absolutely necessary moral for today’s society. As a whole, She Would Be King leaves its “legacy on all of [our] lips — the possibility of rebellion and true freedom in all [our] hearts. All were mere men. All were powerless but died with raised fists” (86).