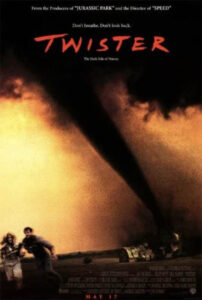 Before Twister, I had, for no explicable reason, been interested in tornadoes and weather. My dad, also a nerd albeit about other topics, encouraged me to make a scrapbook about tornado stuff. This scrapbook included clippings from newspaper articles, hand-drawn crayon twisters, some torn-out pages of elementary school natural science textbooks, and almost prophetically, a few pictures from an in-flight magazine my dad had retrieved on a work trip previewing the upcoming summer blockbuster: Twister.

I can picture the still of Helen Hunt and Bill Paxton, hand-in-hand, outrunning the final tornado as it belches through a barn; I can picture the way it was unevenly pasted to lined paper, the way the glue blotched the center of the image giving Paxton a discolored bulge in his torso. The scrapbook ended on that page, and soon my interest in tornadoes was more focused.

In March 1997, Twister was released on home video and soon thereafter a copy was at my grandparents’ house. I believe it was purchased by my uncle, who was going through a graduate program in English at the time. It became an instant classic. I loved the loud guitar music, all the action-packed driving sequences, the (as the PG-13 rating hilariously suggests) “intense depiction of very bad weather.” It was all the stuff of a little boy’s fantasy. The guys were funny, all the characters had an easy camaraderie I envied, wanting for pals with inside jokes, our own lore, our own nicknames. Twister was as much of a fantasy world escape as Star Wars, which was the film’s only competition when it was time to sit down and watch something.

I didn’t know it at the time of course, but Twister is both a pioneer and vanguard in home release media. It was the first new release available on DVD and the last release on Microsoft’s HDDVD format. Twister has additionally been released on Blu-ray, VHS, and Laserdisc, all three of which I have. I don’t have a Laserdisc player, as my wife’s patience for my obsession knows some limits.

At the beginning of my Ph.D. program in English, I met a film studies student and asked what their favorite film was. You know how the first days of school or new jobs go: you fall back onto your old familiars to help build an anxious rapport with new people. The film student was put off by the question, so I was forced to awkwardly volunteer that my favorite film was “1996 cinema masterpiece Twister.” She was not impressed, and I don’t think we’ve spoken since that exchange, although what could you say to a film studies student with such a poor grasp on quality cinema?

What I have said many, many times since is the phrase “1996 cinema masterpiece Twister,” which rolls off the tongue as naturally as it did in that bizarre and inhospitable moment on that first day of school. When you believe something in your heart, with your whole being, it comes to you naturally. Loving the ridiculous disaster film Twister comes as naturally to me as breathing, maybe more naturally than breathing, because I don’t need an albuterol inhaler for watching the late Paxton and Phillip Seymour Hoffman trade jokes on screen but do when I’m running and it’s hot outside. It also helps that I don’t think it’s a ridiculous move at all.

That fact hasn’t stopped me from being ridiculous about Twister, though. During my Master’s program in creative writing, people who’d known me barely a year had identified me as the Twister guy. They got me a copy of the soundtrack and Mark Mancina’s score on CD. Fun fact: Mancina’s work is Tony and Grammy award-winning, and he went back to score another film about bad weather in Tim Story‘s 2009 Hurricane Season. Like most of John Williams’ Star Wars scores, the music in Twister is as much a character of the film as Paxton or Helen Hunt, and I can, while listening, close my eyes and not only see the scene playing in my mind but also recite the lines from memory.

They also got me a trade paperback of Michael Crichton and Anne-Marie Martin’s original script, which features some really saucy cut scenes. Take, for example, this sultry exchange while the F3 tornado rips through the drive-in:

Bill and Melissa flub through a love scene where Bill’s attention is on tornadoes, not Jami Gertz, and to pull one on Joe, Melissa does the following: “Everyone turns to look as Melissa makes an entrance. Melissa has changed clothes but has a carefully disheveled look. She has pinned her hair up; little wet tendrils hang down. She enters languorously, yawns, stretches, pretending she got laid. MELISSA: “Boy, am I hungry. I could eat a horse. Anybody want another one [they are eating hamburgers at the concession stand]?” Jo gives her a look.”

During high school, a dear friend got me a theatrical poster that is as tall as my wife. Unlike my wife, who only likes Twister, this poster boasts its impressive Box Office returns, which demonstrate how well the film was loved. Twister was the second highest-grossing film of 1996 (first is Roland Emmerich‘s Independence Day, another classic disaster picture), raking in $41 million in its opening weekend. While I didn’t see Twister that weekend, I have added a total of $18 to the film’s theatrical earnings, seeing it once in 2016 during a theater’s throwback screening and again in 2017 after Paxton passed away. According to Box Office Mojo, Twister is the 76th highest-grossing North American film release of all time, not adjusted for inflation (105th worldwide).

I have framed promotional postcards, a German press packet for the film, and was recently gifted a hand-painted parody of the VHS sleeve by a professor as congratulations for getting a new teaching job I will start this fall with enthusiasm, and a human-sized Twister theatrical poster for my new office wall.

I have a t-shirt from the now-defunct Twister ride at Universal Studios in Orlando, Florida, making it the only shirt I own from an amusement park I have never been to. I ration the shirt, out of respect for its rarity and diminishing quality. I know in popular culture the unsaid rule that you can’t wear the band’s t-shirt to their concert is contested, but wearing the film’s shirt while watching it?