With fluffy orange hair, eccentric glasses, and friendliness that flows through all of his actions, Kris Baha masks what he ultimately is, a concerned citizen. He, alongside other Berliners, is reminded daily of Europe’s recent history. He sees vestiges of fascism, communism, surveillance, and fear lying dormant in the city’s buildings and bunkers. Yesterday’s learnings are still clear to him and his growing fanbase, who are turning to the sounds of the 1980s to start old conversations once again.

As a DJ and an artist, Baha picks up on the most ideologically charged 1980s electronic dance music and introduces it to a new and growingly voracious audience. He and his audience are aware that the case for politically engaged electronic music looks a lot like it did some 40 years ago.

Baha plays electronic body music (EBM), industrial music built for the dancefloor. His sounds reference the bands who pioneered EBM in the 1980s to give expression to Europe’s distaste for America. Once used to soundtrack Cold War tensions, Kris Baha is bringing EBM back to give expression to modern politics, and I was fortunate to have a conversation with him about EBM and the trajectory of his music before his Sydney show.

What is it about Berlin and Moscow, and say, not Melbourne, that gives EBM its fluency?

I think there’s a lot of history in Europe that you’re reminded of every day, even if you didn’t live through it. History of what that specific city, country, or generation went through appears in everything you see. In Australia, you lack these reminders. We’ve got it pretty good here. When you’re somewhere like Berlin, the physical environment forces you to see a broader picture, to see a deeper substance of the sort. In Berlin, you know that it was just over there, around those very same buildings and areas, where just over 70 years ago terrible things happened. I think seeing that helps fuel thoughts that maybe you wouldn’t be able to feel if, say, there was always good weather. I’m not saying that writing dark music means that you have to be depressed or have a sense of vengeance for the world or whatever, but it is just harder to tap into broader thoughts if your surroundings are overly positive.

What do you think it is about EBM that gives it its politicized character?

A lot of early minimal wave, which then mutated into EBM and other sub-genres, was politically tied in with the Cold War. It sound-tracked what people were living through – and they were living with the fear of nuclear war. The wall was still up in the early 1980s, and this affected the eastern parts of Europe right out to France. Then there was the memory of World War II as well. All these artists were experiencing this daily. And I think this is happening again, now, with the rise of far-right groups. It feels like this is coming back again. Maybe this is why there’s been a surge in interest in EBM. Because, like in the 1980s, we find ourselves with something to revolt against.

How do you find this enters your music?

I find when I’m on the road, it’s a good time to sift through my recordings, edit them, and cut them down. When I was editing “Defied”, I was in a taxi on the way to play at some festival seven hours out of Moscow. All of this incredibly dramatic, Brutalist architecture was seeping in, and the surreal Russian landscape became my soundtrack. I try to keep my releases as honest as possible with how I’m feeling at that moment. Whatever I’m going through in that period, whatever is going on around me, whatever is influencing me, that needs to be the concept. That needs to be what I reflect upon.

Can’t Keep the Fact sounds like your first, deliberately EBM album. What motivated you to make it?

Can’t Keep the Fact was a response to the first year of the Trump Presidency. His statement at the time of the Charlottesville massacre that “there are fine people on both sides” really shocked me because I couldn’t see how he could justify there being fine people on both sides. One of those sides was the alt-right, and they were chanting Nazi slogans and baring Nazi flags. For me, it was just completely absurd – no-one had ever heard that type of comment coming from someone of such power in the West. Dealing with all of that and watching people become a bit hysteric by it being normalized, that’s what Can’t Keep the Fact is about – when facts stopped mattering in 2017.

You’ve mentioned before that In Your Arms has a much more personal story. Can you tell me more about that?

In Your Arms was about the loss of a good friend of mine. It was about losing him and not being in Melbourne when it happened with everybody. I guess it was my way of saying goodbye. Most of the songs are about him, dealing with the idea of loss, or at least dealing with not knowing how to deal with loss. It was also at a time when I was living by the Kottbusser Tor U-Bahn, an area of East Berlin where a lot of homeless and out-right junkies live. The track “In Your Arms” specifically is about this environment. It’s about injecting and the darkness surrounding it – not that I’ve ever done it that is.

Your next release, My Master, references sexual subservience and dominance. That leather whip on the cover alone does it. Why do you think this is often a concern in EBM?

I think a lot of that reflects the kind of parties this music is played at. I do play at sex parties from time to time, and a lot of the music I play is fuelled by sexual themes and has a sexual background. I like to think that my music is more dark and sexy than dark and angry. I try to steer clear of the angry, macho end of EBM.

Like all my releases, I want to bring the listeners in as close as I can to what I am going through at the time but not to make it too specific. I want there to be some ambiguity so they can allow it to apply to their lives and what they are going through. This interpretation is important to me. So, with “My Master”, I wanted to explore sexuality as something beyond your control, not having a choice, like being a slave to yourself on a mental level. “My Master” explores the feeling that you’re not able to overcome certain things because you think you’re enslaved to your thoughts. And I wanted to say, no, when you have that realization, you can become your own master and then embrace yourself unconditionally.

And now Palais is pretty much me closing a chapter on my life in Australia.

Have you closed that chapter in your life in Australia?

Oh yeah, totally. This is my first time back in three years. I got to see my family yesterday and on Wednesday night when I arrived in Australia, which was really nice. But yeah, with Palais, it took me about five years to come to this conclusion. It started when I first moved to Berlin, and then it took me a while because I wasn’t sure what I wanted to say with my first album.

That makes a lot of sense. Palais sounds like it picks up on your earlier stuff, much more industrial, less distinctly EBM, and then moves past In Your Arms. It’s a great combination of all your work.

Totally. I wanted to make this a bit of the past, a bit of where I’m going. At the time I started working on it, it was unclear what statement I wanted to make. It wasn’t until mid-2018 that it came to me. I had been living in Berlin for a year and a half. I had settled into my new apartment and felt that this was home now. This album was to represent me closing the chapter on my old life in Australia.

“Palais” is an old way to say theatre auditorium, and as it sounds, it’s associated with being extravagant and bold. Before moving to Berlin, I had been running weekly club nights with my brother Dan for eight years. The last party series we ran was called Power Station, and upon reflection, I guess this night was our ‘Palais’. We stopped running them when I moved in 2016. After I settled into my apartment and had a chance to really process my new home, I realized this is what I wanted to express in my first LP.

What do you think of EBM becoming trendy?

When I started making this music again, I was essentially just following my instincts. I wasn’t paying attention to if it was a trend or anything, I just thought it was cool. Funnily enough, there are loads of producers who have been doing this for longer than I’ve been making music, but when I first moved to Berlin, no one was really into this kind of stuff. Only a few select parties like Aufnahme + Wiedergabe, some specialized Goth nights, and what Mannequin was running, but you know, Berghain wasn’t championing the likes of Phase Fatale and Silent Servant. That just wasn’t a thing – but now it is, which is great.

What do you think of bands like Boy Harsher using some of the tropes of EBM and making them more accessible to broader audiences?

I have no problem with people being into EBM or whatever you want to call it – if people want to listen and learn more about it, then sure, why not? I don’t think it’s one of those things that can become mainstream anyway as I think we’re so apart from what mainstream is nowadays that it doesn’t matter. And yes, I like what Boy Harsher and bands like them are doing. They’re all very hooky. The same goes for bands like Drab Majesty and Xeno & Oaklander, who are all touring heavily and playing to full crowds. If anything, DJs, myself included, we’re the ones who have taken what the original artists were doing and made it accessible by mutating it for a dance floor and bringing it into clubs. Most of this music through the late 1980s and 1990s onwards were, and still are, performed by artists and bands as live music. If anything, we DJs have bastardized the sound.

To close off, I recently read that you said your ideal venue to play in would have to be an empty crypt equipped with strobe lights, a smoke machine, and all the black leather freaks. If you had it your way, what would be playing?

In Your Arms live. I’ve been playing it live a lot recently, and it’s the one that everyone knows. The last three or four months, its something that I’m not really used to, but I’m welcoming. Generally, the front row has been singing the lyrics back to me. It’s bizarre because I know it’s not a hit or a big track – it’s not like it’s some worldwide phenomenon. It’s a good mixture of your more traditional song elements, having some hooks in there, but it also has something novel about it, something for people to react to. I think that would be the most appropriate track for the crypt.

My final question. Now that you live in Berlin, what is your favorite Späti beer?

I’m not going to say this because of the name. But I generally do like the taste of a HELLes. 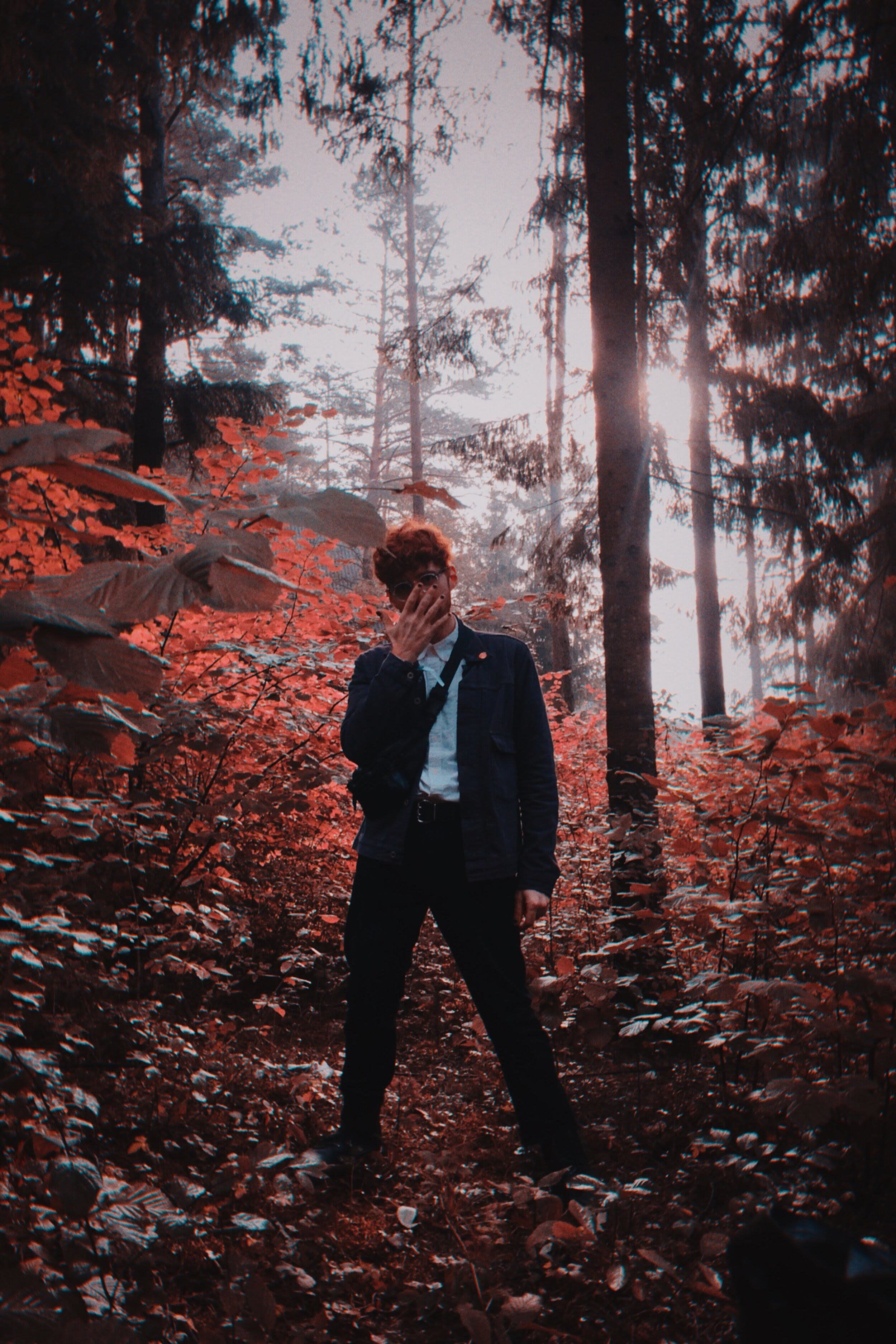