The road from garage to punk had as its most important fill-up station the glam scene of the early 1970s. Featuring a breadth of sounds that spanned from bubblegum teen pop to raw riff rock, glam-punk camped out in the latter’s territory. And like on so many roads that led to punk proper, glam-punk boasted Lou Reed and David Bowie as its principle pit-stop mechanics. The most influential forerunners of punk on their respective sides of the Atlantic, these trailblazers established the tenets of glam that would serve as the foundations for future glam-punk.

At face value, glam appears to have little in common with the garage rock that preceded it. However, as the garage-heavy 1973 covers albums from Bowie and Brian Ferry reveal, some of the major artistic figureheads of glam understood the connecting genealogy between these primitive forms. Reed, too, had started his career in a frat rock parody band, The Primitives, before shifting gears into more avant-garde terrain after meeting John Cale and Andy Warhol. Glam’s styles and sounds may have differed from garage as the latter grew more psychedelic, but they shared similarly contrarian attitudes without wholly departing from ’50s and early ’60s rock ‘n’ roll forms. “Rock ‘n’ roll with lipstick on” was John Lennon’s terse description of glam rock (Reynolds).

The transition of raw rock from garage to glam began in the mid-60s when Reed met Warhol. Under the latter’s mentoring and tutelage, Reed was introduced to the glam-punk environment of The Factory where black painted walls were decorated with blankets of silver foil, where drug addicts and transvestites from New York’s city streets mixed with bo-ho artists, and where an artistic ethos of shock, rebellion, and innovation prevailed. Striking pre-political poses that challenged the conventions of gender, sexuality, and class, Warhol’s posse of eccentrics became an inspiration to the young Reed, who felt encouraged to ignore any pressures to compromise and to charge full-on with his decadent musings.

Early Velvet Underground songs like “Venus in Furs” (1967) and “Waiting for the Man” (1967) investigate sex and drugs experiences with a blasé reportage that would set a precedent for glam-punk lyricism, though the swagger riffs of glam’s sound would not emerge fully formed until a little later in songs like “Sweet Jane” (1970) and “Rock & Roll” (1970). In the context of late ’60s rock culture, with its hippy vibes dominating from the West Coast, the Velvet Underground crafted a distinctly New York identity and attitude later inherited by proto-punk successors like the New York Dolls and Harlots of 42nd Street, punk ones like the Ramones and Richard Hell and the Voidoids, and post-punk ones like Sonic Youth and the no wave set.

As proudly alternative as the Velvet Underground had been, thanks largely to the avant-garde contributions of viola noise provocateur John Cale, Reed did not fully embrace the glam component of Warhol-style pop art until he went solo and released Transformer (1972). Reed’s favored taboo topics of drugs, sexual deviance, and gender-bending were all represented in the album’s key cut, “Walk on the Wild Side”.

This surprise chart hit featured various characters the songwriter had met through and around Warhol, each dramatized against the backdrop of New York’s seedy streets. For many future punks this song provided their initial portal into Reed’s oeuvre, and they picked up on not only his predilection for taboo topics but also his deadpan observational style of narration, shelving them for future re-deployment.

Not only did Reed (as solo artist and in the Velvet Underground) craft music and lyrics that consciously ran counter to the utopian and sentimental perspectives of the hippy culture, but he underlined those contrasts in his style choices, too. Rejecting the bright colors of the flower power children, the Velvet Underground dressed in all black and wore dark shades; whereas the hippies symbolized an invitation to communal interaction, Reed’s proto-punks signified alienation and separation from the “we” generation. By his early solo years Reed was wearing dark make-up and bleaching his hair, creating the kind of foreboding glam look that his more theatrical peers, Alice Cooper and David Bowie, were also developing to more dramatic and commercial ends.

Prior, in the late ’60s, Bowie was floundering, trying to make any inroads he could into the music world. He tried writing folk songs, garage pop songs, even children’s novelty songs. He was desperate to find a niche that would work for him, the industry, and potential audiences. But success proved elusive. Then in 1967 his manager Ken Pitt handed him an acetate copy of the yet-to-be-released debut the Velvet Underground album that had been provided by Warhol. Within days Bowie was rehearsing “I’m Waiting for the Man” with his band. So began Bowie’s gradual transformation from jack-of-all-trades into the public face of glam rock, and later, in its more aggressive manifestation, glam-punk.

In the UK, as in the US, rock music had fallen into a slumber in the early ’70s, with stadium rockers enjoying the financial fruits of their labors while contributing few challenges to the form or its contents. The typical folk, prog, or classic rock performance of the time usually consisted of static musicians dressed in T-shirts and jeans playing extended jams for equally unanimated audiences. Pink Floyd, ELP, and Eagles were indisputably stellar musicians in pursuit of excellence, but lost in their efforts was the raw garage spirit that had inspired rock ‘n’ roll in the first place. 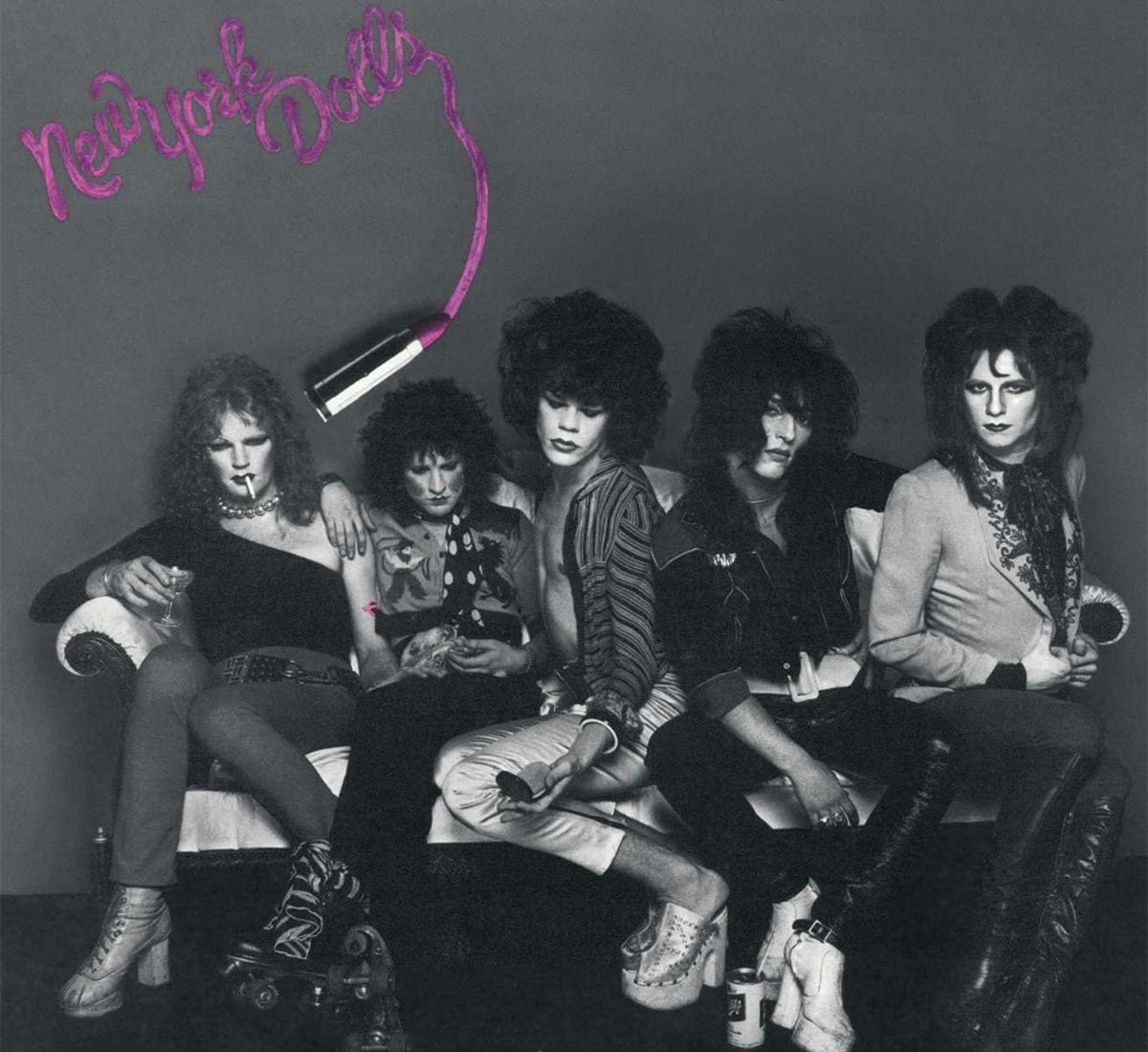 However, in the Velvet Underground’s sonic minimalism Bowie perceived excitement over excellence, provocation over prowess. Thereon, alongside his new co-conspirators, Lou Reed and Iggy Pop, Bowie adapted Warhol’s glam gestures of gender and sexual rebellion and set about “reclaiming rock & roll from the technocrats” (Heylin, p.229).

The early ’70s are often cited as glam’s glory years; they were also Bowie’s glam-punk years, starting with Hunky Dory (1971), which featured lyrical calls for youth rebellion in “Changes” and sonic ones in the Velvet Underground-inspired “Queen Bitch”. Detroit’s proto-punk sounds, developed contemporaneously by Iggy’s Stooges and the MC5, feature strongly on Bowie’s next albums, particularly on songs like “Suffragette City” (1972), which marries the MC5’s thick riffs to dystopian lyrics about youth anomie. After The Rise and Fall of Ziggy Stardust and the Spiders from Mars (1972) and Aladdin Sane (1973), Bowie developed the particularly bleak visions of the future that punks would later translate into the present tense.

The title track of Diamond Dogs (1974) previews some of those punks with its scenario of wild children surviving in a Mad Max-like Manhattan, squatting amidst the urban rubble while posing proudly as they “sashay on the boardwalk” then “scurry to the ditch”. What Bowie, Reed, and Pop brought to glam at this time was the un-glamorous in all its sordid and glorious rebellion. Still, the greatest exponents of slum-dog sleaze swagger came from another group of gutter-glam punks in the early ’70s: the New York Dolls.

Although celebrated in hip spots like Max’s Kansas City and the Mercer Arts Center, the band were accepted in few venues beyond. Indeed, over their five-year career the band rarely even ventured beyond the five boroughs, due largely, according to some band members, because some of them were being reluctant to stray too far from their favored drug dealer. (Q & A: New York Dolls, Part 1.)

The Dolls’ New York-style raunch was an acquired taste in the early ’70s, particularly in the UK where the glitter boom was represented predominantly by more clean-cut teenybopper stars like Sweet, Mud, and Suzy Quatro. Even Bowie kept his bleak scenarios within recognizably fantasy worlds, but when the Dolls sang “Trash” (1973) the word and sentiment were understood to be autobiographical. Clinton Heylin describes their “trash-rock aesthetic” as a “hall-of-mirrors refraction of the nascent English glam scene” (p.72), essentially the punk uglification of glam.

Although worshiped by the Mercer faithful, few thought the Dolls would ever break big—and majority opinion proved correct. However, among those taken by the band were four lads from Queens that would soon cultivate their own “trash” identity around a similarly minimalist sound of simple guitar riffs, The Ramones. Some Brits were listening, too, like the Sex Pistols, whose future members saw the band perform on the live rock show, The Old Grey Whistle Test, in 1973. The less than amused “hippy” host of that show, “Whispering” Bob Harris, dissed and dismissed the band on-air as “mock rock”, but Pistols’ drummer Paul Cook remembers, “They were really funny. And they just didn’t give a shit” (Laing, p.23).

That attitude, unapologetic and self-deprecating, strutting and snarling, is what gave the Dolls their unparalleled punk edge during glam’s heyday years. Al Spicer goes so far as to argue that the band “invented punk by adding bad attitude to glam rock” (p.212). Decadent, dangerous, and dirty, they brought, as their signature song states, a “personality crisis” that was “hot”.

Just as soon-to-be punks took notice, so, too, did soon-to-be punk manager Malcolm McLaren, who tried his hand at managing the band during their dying days. Alas, his efforts at reinventing the Dolls as “red scare” rebels failed, as did his more challenging task of herding the five cats under one roof. Abandoning the sinking ship, McLaren returned to London in search of some other street hoodlums to apply his Svengali skills to.

The New York Dolls’ glam-punk identity was notably visible but it went way beyond personality and looks. In Johnny Thunders’ monster guitar assaults the band boasted a sonic power similar to what Mick Ronson brought to early ’70s Bowie and Mott the Hoople. Their mid-tempo distorted riffs became the template for glam-punk in all its subsequent manifestations. The unsung heroes of proto-punk, Thunders and Ronson influenced as much as any the minimalist approach and crunching guitar tones that both Steve and Mick Jones would bring to their respective UK front-line punk bands in 1976.

A straight line can be drawn from Dolls-style glam to the arrival of punk; nevertheless, by 1976 the new cast of upstarts that had commandeered CBGBs were turning away from glam style in favor of a less dressed-up representation of street realism. As hard as the Dolls were, even harder sounds and looks came from the Dictators, the Ramones, and the Dead Boys — all of whom were partial to the loud distorted guitar riffs of glam but not so much to its effeminate cross-dressing.

A similar trajectory would unfold in the early ’90s, when the metal inheritors of glam had their stars dimmed by the more grounded punk-metal assaults of grunge. However, whereas Hanoi Rocks, Mötley Crüe, and Guns N’ Roses were able to cash in before the crash, the New York Dolls, like so many trailblazers, were the unfortunate victims of being too far ahead of their time and too far behind the remuneration time that arrives with industry co-option.

Glam-punk, like garage punk, is a retrospective hybrid, but it has endured far beyond its initial inspirations, re-emerging within goth (Bauhaus, Specimen), industrial (Marilyn Manson, Skinny Puppy), guitar pop (Manic Street Preachers, the Struts) and, as noted, “hair” metal. Each bear the mark of glam’s influence.

Contemplating these sub-genres we are forced to evaluate the paradox inherent to glam-punk: how does glam’s individualism, heroism, and search for spectacle reconcile with punk’s more down-to-earth social ethos? In the performances (both live and recorded) of a glam-punk act like Siouxsie and the Banshees, for example, there is a distance and disconnect between artist and audience that seems antithetical to punk’s celebrated mission to bridge that gulf. Glam-punk may speak to youth concerns, but its theatrical indulgences and (alter-)egotism have—more-often-than-not—assigned social realism or advocacy to the realms of fantasy and metaphor, removed for contemplation by a created persona more than a “real” self.

Heylin, Clinton. From the Velvets to the Voidoids: The Birth of American Punk. Chicago Review Press. 2005. (p.229)