Comrades, the Soviet cinema of the 1920s marked a creative explosion, especially in techniques of editing, the like and breadth of which were never seen again. Among these creators was Vsevolod Pudovkin, four of whose most important films are showcased in The Bolshevik Trilogy, a Blu-ray set produced by Flicker Alley in collaboration with Blackhawk Films and Lobster Films.

A little older than his colleagues, Pudovkin displayed techniques slightly less splashy than those of Sergei Eisenstein or Dziga Vertov and correspondingly more at the service of individual humans rather than “the masses”, and the irony is that this probably made the masses more emotionally responsive to his films. We mention these filmmakers together because they are the most famous and the most self-conscious in applying editing techniques, and also because they were the most forthright and effective in using cinema as propaganda in praise of the Russian Revolution and the workers’ state.

Pudovkin apprenticed with Lev Kuleshov, a master several years younger than he, who proclaimed the principles of editing to create emotions in the viewer. While pioneers in theatrical drama, such as Konstantin Stanislavsky, were exploring how the actor must embody and convey emotion, Kuleshov virtually refuted cinematic acting by demonstrating that the identical close-up of an actor can be “read” as containing the appropriate emotion depending on what objects are in the surrounding shots. This process, dubbed the “Kuleshov effect”, is the opposite of an actor projecting emotion for the audience. Essentially, actors don’t need to act if viewers can project the emotion for them out of the raw material of film images.

Editing also creates actions that never existed in a world that doesn’t exist. That idea can be found in Pudovkin’s first fiction film, the satirical short Chess Fever (Shakhmatnaya goryachka,1925), co-directed by writer Nikolai Shpikovsky. It’s included as a vital bonus on the Blu-ray.

As the late filmmaker and historian Jay Leyda explains in his landmark Kino: A History of the Russian and Soviet Film (Allen & Unwin, 1960), Pudovkin was asked to make a film about the International Chess Tournament at Moscow’s Hotel Metropol in November 1925, where such masters as José Raúl Capablanca were playing.

Pudovkin filmed them, ostensibly as newsreel footage, and cut them into a comic scenario about a lanky brush-headed fool (Vladimir Fogel) swept up in the city’s chess fad to the consternation of his neglected girlfriend (Olga Zemtsova, aka Mrs. Pudovkin). By editing Capablanca with bodily closeups of another actor entirely, the film creates the impression that the chess master engages in a little drama with her. This sets a precedent for how footage of Mary Pickford and Douglas Fairbanks on their visit to Russia would be incorporated into Sergei Komarov’s comedy A Kiss from Mary Pickford (Potseluy Meri Pikford, 1927). Those Russians knew how to co-opt their foreign visitors.

The witty editing and wacky visual gags are the attraction of Chess Fever and show how these montage techniques can work as well for comedy as they had for kinetic action in Kuleshov’s The Death Ray (1925), scripted by Pudovkin as a pastiche of American chase films and French serials. Better, in fact, since The Death Ray wasn’t a popular success. Incidentally, a Blu-ray collection of Kuleshov’s films would be welcome and important. 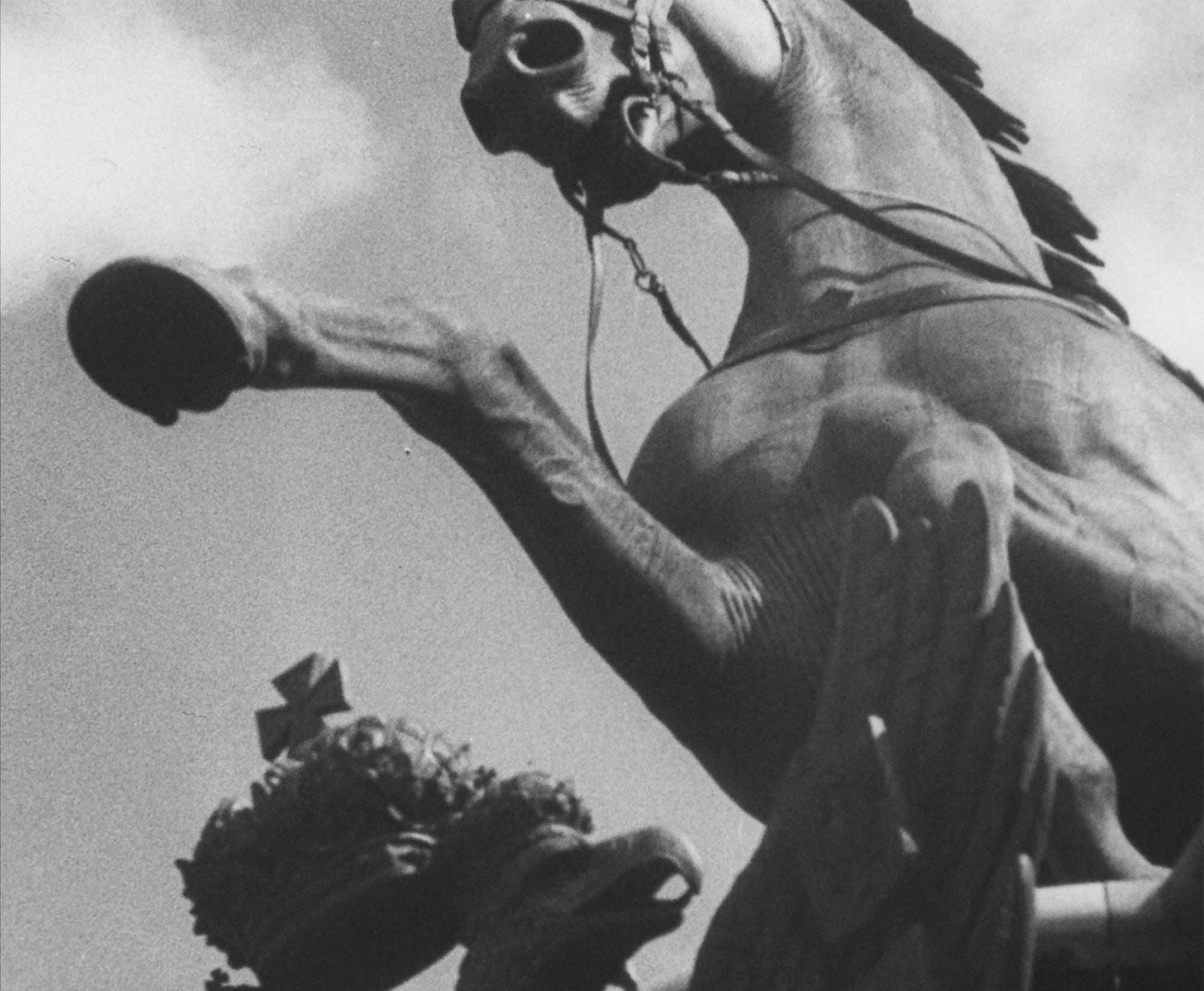 Aside from a scientific documentary, Pudovkin’s next film and first narrative feature turned into a monument of Soviet cinema: Mother (Mat, 1926), a simple emotional drama from Maxim Gorky’s famous 1906 novel. The book was inspired by the failed 1905 Revolution, which is also the subject of Eisenstein’s Battleship Potemkin (Bronenosets Potyomkin, 1925). In Soviet mythology, this event is perceived as the forerunner that would bear fruit over a decade later in the Russian Revolution of 1917.

The little mother of the title, bent under the worries of poverty and a drunken useless husband (who’s not in the novel), her head wrapped in a scarf like some old babushka, is played by Nina Baranovskaya, a professional stage actress associated with the Moscow Art Theatre and only just hitting 40. She’s initially examined from a height, the camera looking down upon her as a small downtrodden figure in a room made bare by poverty and her husband’s tendency to trade objects for booze.

When the husband (Aleksandr Chistyakov) is killed in a political brawl over the workers’ strike into which he’s manipulated, it’s more of a release to the mother than stress. She reacts with a mostly contained impassivity that, according to the commentary, was a point of contention between actress and director. He would allow her sometimes to act whole scenes expressively, and then only use brief shots from the end of the performance in order to present her in an understated, naturalistic register.

The real conflict involves the son Pavel (Nikolai Batalov of full sensual lips and frizzy hair), who’d been asked by a revolutionary girlfriend (Zemtsova) to hide some guns under a floorboard. The mother is so beaten by life and so fearful of any visit from the Tsar’s military authorities (one of whom is played by Pudovkin) that she thinks she’s best avoiding trouble by handing the guns over. Of course, the next blow is that her son is condemned to Siberia in a trial scene of near-parodic caricatures among judges and spectators.

“Where is truth?” she cries in possibly her life’s first outburst against authority. As her son awaits deportation or escape, she joins the uprising masses in a demonstration that will be brutally put down. What matters is her raised consciousness as a symbol of Mother Russia, purposely doubling her with Eugène Delacroix’s 1830 painting Liberty Leading the People as she defiantly carries what we understand as the red flag of proletarian revolution. Whereas she’d been introduced as a small figure looked upon from on high, the camera now looks up at her, free of her scarf, striding like a colossus.

If a book could be written on the symbolism of Russia as mother, that’s partly due to Gorky and this film. It’s not the first film of Gorky’s novel — Alexander Razumni had made one in 1920–and not the last either, but this is the famous one. The characters are types and, as with Eisenstein, most of the actors are typecast from physical and facial characteristics. Individual shots have all the considerable iconic power that can be created from uncluttered mise-en-scène, angle, lighting, and the human face, yet it’s the editing that most effectively conveys the ideas to be manifested from these images.

As Russian scholar Peter Bagrov observes in his commentary, writer Nathan Zarkhi makes a few significant changes to Gorky’s story, and Zarkhi and photographer Anatoli Golovnya must be counted as equal collaborators with Pudovkin, working out every detail together from the start. Bagrov observes not only the Delacroix reference but a nod to a Van Gogh painting, observing that in this flowering of avant-garde techniques, “anything goes”. Much of Bagrov’s input quotes Leyda, whose extensive discussion of the film remains a basic text. Among other remarks, Leyda asserts that this film’s “expert cutting on human movement” has been “more widely absorbed into general film technique than its more abstract cutting propositions.”

Pudovkin’s acknowledged debt to D.W. Griffith is demonstrated in the scene where Pavel jumps from one ice floe to another in emulation of a famous scene in Way Down East (1920). This is another way of saying the film owes a hidden debt to American novelist Harriet Beecher Stowe since Griffith lifted the idea from her 1852 novel, Uncle Tom’s Cabin, and its barnstorming stage productions. 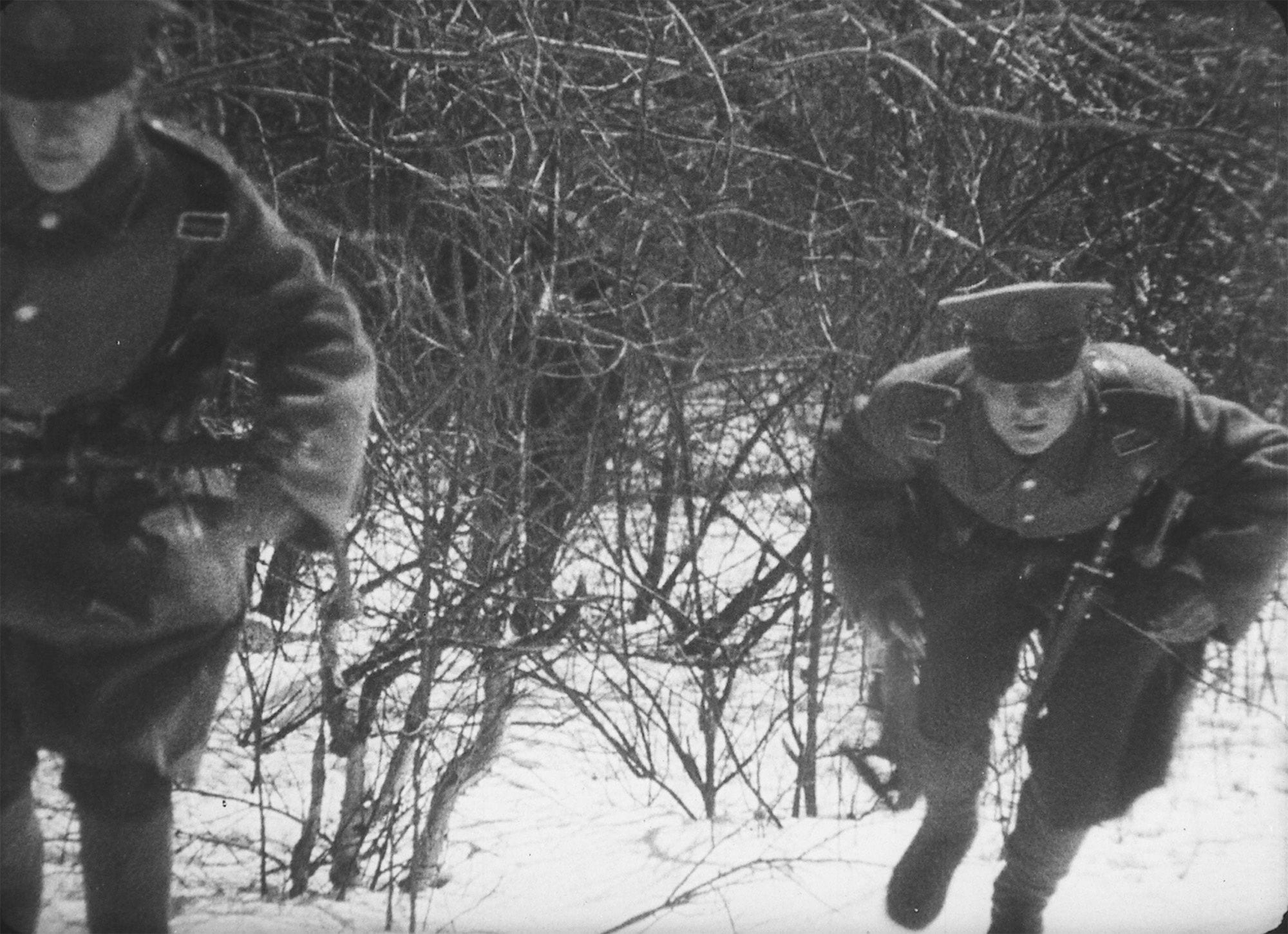 Mother was tremendously successful at home and abroad. In fact, the print here is an old American one with English titles, and it’s in fairly battered and unrestored shape with a piano score by Antonio Coppola. The next film, The End of St. Petersburg (Konets Sankt-Peterburga, 1927), is a 1969 Russian restoration of a film commissioned to celebrate the tenth anniversary of the October Revolution within a fictional story. It’s by far the best-looking print in the set.

Again working with writer Zarkhi and photographer Golovnya, and credited as co-director with Mikhail Doller (who’d also worked crucially on Mother), Pudovkin constructs a story of evolving class consciousness and solidarity among the downtrodden workers. The film opens in bucolic rural beauty, and when Pudovkin shoots the lyrical countryside, he tends to do it from an elevated perspective so that the ground fills the screen as people walk across it. This beauty is contrasted with the harshness of farm life, as a woman’s birth of a daughter is greeted by the glum, ancient, Tolstoyan onlookers as “another mouth to feed”.